When virtual reality took off slower than expected in 2016, Virtuix pivoted with its Omni Arena 360-degree treadmills for VR, taking them into theme parks and VR arcades. But now that the pandemic has hobbled those attractions, Virtuix is returning to the home VR market with the launch of its new Omni One treadmill, debuting in the second half of 2021.

That double-pivot hasn’t been easy for the Austin, Texas-based company, but CEO Jan Goetgeluk said in an interview with GamesBeat that he has been encouraged by VR’s steady growth in the entertainment market. And he is also glad that Virtuix has had time to come up with a full solution for its $1,995 price.

“It’s always been our original vision to bring the Omni to the home,” Goetgeluk said. “That’s how we got started. In 2016. We, we pivoted to the commercial markets, as the consumer market for VR was fairly slow to take off in those early years. And we were getting a lot of traction in the commercial market. But it has always been our vision to come back to the home eventually.”

The Omni technology gives you your legs back in VR. When you put on a VR headset, you can feel like you’re in another world. But you can’t really move around. The omni-directional treadmill solved that, as you can run or walk in any direction and feel like you’re physically moving in VR. You have to actually move your legs to make your character move in a VR game, and so you also get some pretty good exercise at the same time.

“You can think of it as a Peloton bike for gamers,” Goetgeluk said. 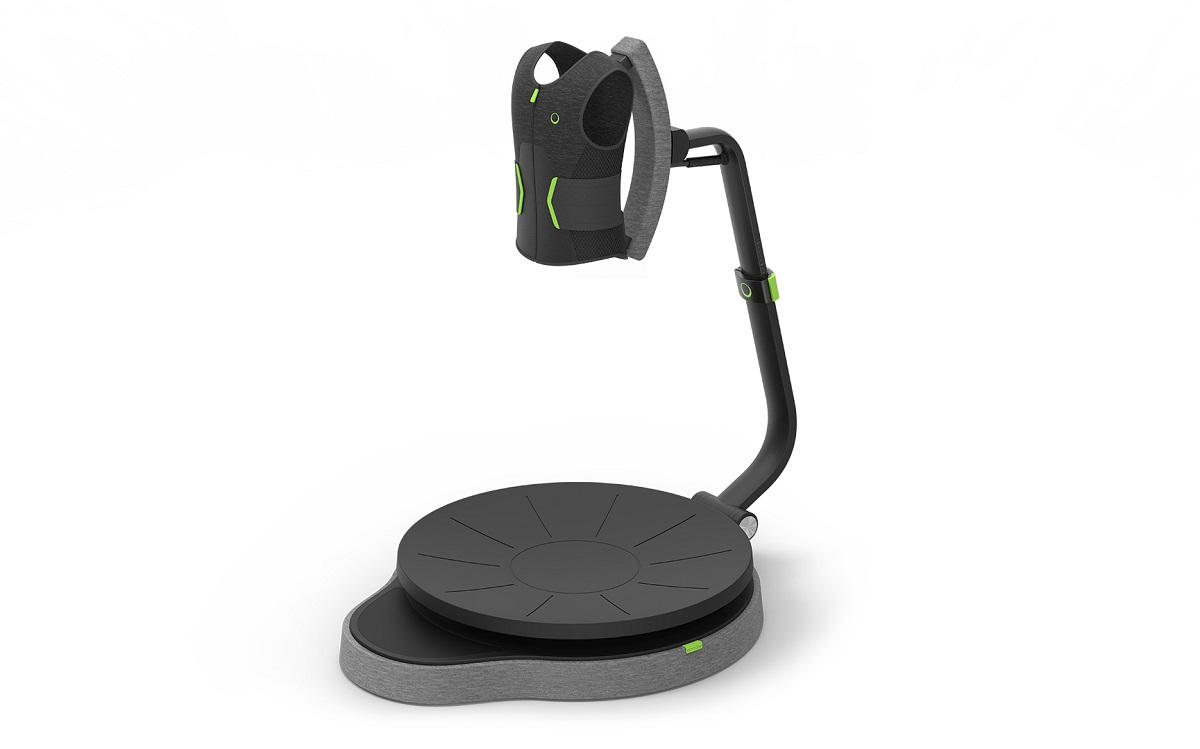 Instead of having to go to the now-closed arcades, players will be able to explore virtual worlds in their own homes with the Omni One, which is a consumer version of the previous treadmill, he said. The earlier Omni Pro is available at more than 500 entertainment venues in more than 45 countries. Virtuix has shipped more than 3,650 of those commercial units to those venues to date.

Compared to Omni Pro, Omni One is lighter, more compact (with a four-feet diameter), easy to fold up and store, and it allows players freedom of movement, including crouching, kneeling, and jumping. Omni One is a complete entertainment system that comes with a standalone VR headset (no PC or cables required) and works straight out of the box, providing a seamless user experience.

Omni One will feature its own game store with 30 titles at launch, including shooter games developed by Virtuix alongside top titles licensed from third parties.

Goetgeluk said the demand for the home unit was clear because some fans played with the Omni Pro hardware every week at commercial locations. The games are multiplayer and highly social, so you can play with friends from around the world.

Goetgeluk has been working on the technology since 2010, and he formally incorporated the company in 2013. The company has 14 issued patents and it has raised $20 million to date from investors such as billionaire Mark Cuban. The company has more than 60,000 registered players.

The top Omni locations include a few Dave & Buster’s locations. Virtuix’s content platform, Omniverse, has hosted more than 1 million plays, and the Omni was even featured in director Steven Spielberg’s film, Ready Player One. 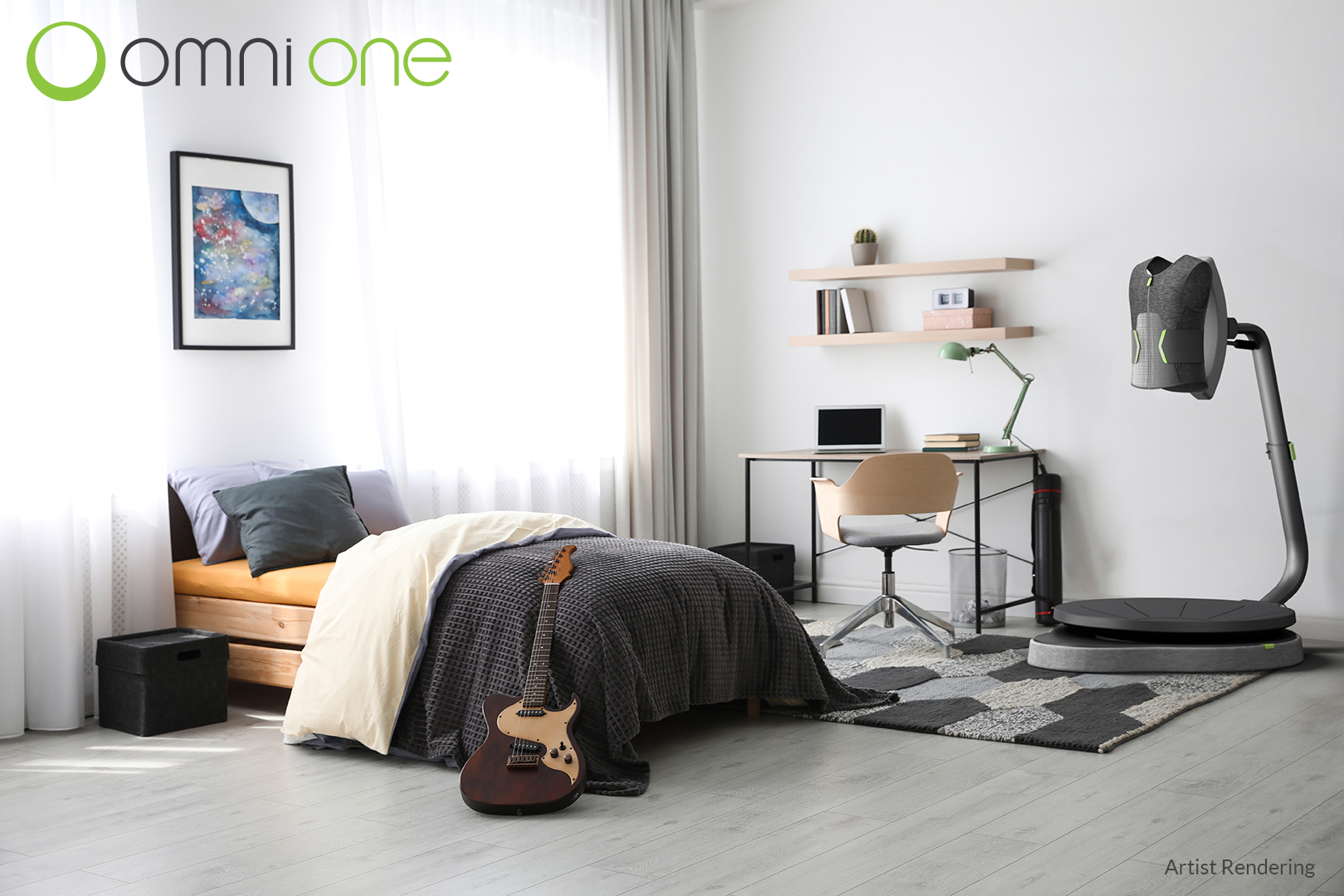 Above: Artist rendering of the Omni One.

Omni One will sell for $1,995 (or $55 per month with a monthly payment plan). This pricing puts Omni One in line with mid-tier gaming PCs or connected fitness gear like a Peloton bike. While you can get good exercise with the Omni One, but Goetgeluk said the company won’t market the device as exercise gear.

For $995, Virtuix will offer a “dev kit” package that comes without a VR headset. The dev kit option allows developers and VR hobbyists to use Omni One together with their own PCs and headsets for development or to play PC-based VR games. There are 23 games that play on the Omni Pro today. The company has 30 employees.

Before selling Omni One to the mass market, Virtuix is launching a Regulation A (“Reg A”) funding campaign. Reg A is a type of offering that allows anyone to invest in Virtuix and receive shares in the company. As an investor perk, Reg A investors will receive a 20% discount (worth $400) when buying Omni One or, for those who invest in the first week, a 40% discount worth $800. Investors will be first in line to receive their Omni One orders when production starts. Goetgekuk said the company has not decided which VR headset to use yet.

“Our whole team believes that VR is still going to have a big role to play in, in our society,” Goetgeluk said. “Now, for the first time, we have standalone headsets and we can bring out a complete system for the mass market. That’s a game-changer.”