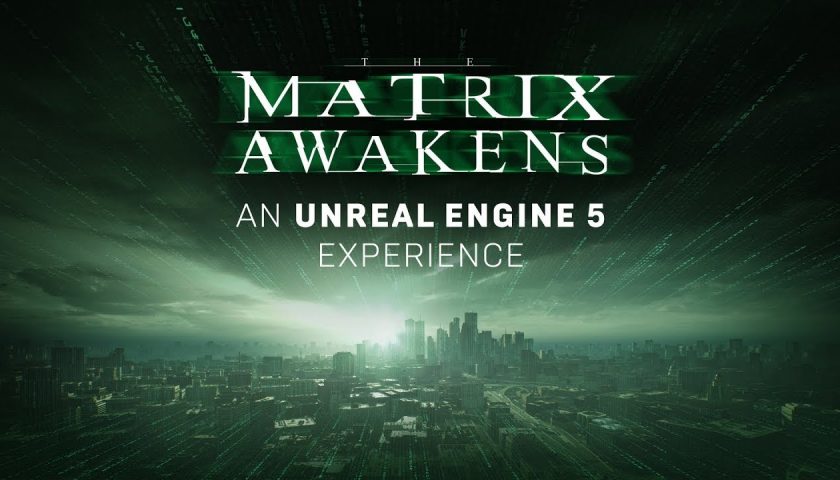 The Matrix Resurrections, the fourth installment in the famed series, is set to debut on December 22nd. Later this week the film will get a tie-in game experienced based on Unreal Engine 5, but it won’t be available in VR and that’s a terrible shame.

Here we are, 20 years after the original Matrix, a film that argurably popularized the concept of virtual reality more widely than any other single piece of media before or since. Amazingly, in those intervening 20 years, virtual reality has seen a resurrection of its own. It made the leap from failed ’90s VR tech that survived only as niche, ultra-expensive training equipment to what is now a widely available consumer technology on the verge of reaching a mainstream audience.

VR is here. So it’s a shame that an upcoming tie-in game experience for The Matrix 4 seems to be largely ignoring the tech.

The upcoming title, called The Matrix awakens: An Unreal Engine 5 experience, is set to debut on December 9th during The Game Awards, just two weeks ahead of the film.

Get ready for a glimpse into the future of interactive storytelling and entertainment with UE5 in this free, boundary-pushing cinematic and real-time tech demo.

Created by members of the original movie team including Lana Wachowski along with Epic Games and partners, ‘The Matrix Awakens: An Unreal Engine 5 Experience’ is a wild ride into the reality-bending universe of ‘The Matrix’ that features performances by Keanu Reeves and Carrie-Anne Moss.

Want to see what’s possible when you combine the power of Unreal Engine 5 with the Xbox Series X/S? Step into the world of one of the most iconic action franchises ever made. Pre-download ‘The Matrix Awakens: An Unreal Engine 5 Experience’ now.

The Matrix awakens: An Unreal Engine 5 is available on PlayStation 5 and Xbox Series X/S and can be pre-downloaded today.

We can see from the PlayStation 5 download page that the experience doesn’t list support for PSVR, nor do we have any info suggesting the app will be available on PC VR (or even PC generally) or Quest.

This isn’t going to be a full-blown game by any means, just a short free experience, presumably rendered in real-time with Unreal Engine 5. The project seems to be a collaboration between Warner Bros and Epic Games, the company behind Unreal Engine.

From the brief glimpse that we get, it looks like the experience will probably be a showcase of Unreal Engine’s MetaHuman technology, which enables the creation and real-time rendering of impressively realistic digital humans.

Especially considering that Unreal Engine is one of the leading engines used to create VR content, it’s a big bummer that this perfect opportunity to tie together a famed franchise, built around the concept of VR, with the VR technology that’s actually available to us in this day and age.

But hey, I get it, this is a piece of marketing and clearly Warner Bros and Epic want to reach as many people as possible. Constraining the project to only work in VR would work against those objectives because there’s way more game consoles out there than VR headsets. And though the experience could have optional VR support, it’s likely it doesn’t due to performance considerations. After all, the experience will probably be a demonstration of high-end real-time graphics, and VR makes that a whole lot more challenging due to the need to render stereoscopically and at high framerates & resolutions. But that doesn’t change the fact that The Matrix couldn’t be more perfectly suited to a VR game or experience—both conceptually and from a gameplay standpoint. We’ve already seen a handful of great VR games that do an amazing job of invoking the experiences portrayed in the film without even meaning to. Hell, here an excerpt from my SUPERHOT VR review from five years ago, which employs a totally unique time-bending game mechanic:

It actually seems like a bit of a missed opportunity that this game isn’t literally built on The Matrix IP, as the execution elicits that feeling of awesome bullet-time combat that the franchise is known for (not to mention all the VR themes), and would open up rich narrative opportunities. Who knows the Wachowskis? We need to introduce them to Superhot VR.

I’d actually highly recommend listening to the Matrix movie soundtracks while playing the game; who would have guessed—it’s a perfect fit!

Oh and then there’s my Pistol Whip review from two years ago, which even makes you move like you’re in the Matrix.

Enemy bullets fly at you slowly enough to give you time to dodge your head out of the way as they approach. As you get used to the timing, you start to proactively move and dodge rather than simply react. As a result you start to ‘flow’ your upper body around as you dodge and shoot your way through each level. The movement feels a lot like being an Agent from The Matrix (1999).

And that’s hardly half of it. Even the stabby-stab gameplay of Blade & Sorcery makes you feel like The One on occasion as you perform highly choreographed combat in slow-motion.

That is to say, VR is not just a great thematic fit for some kind of Matrix experience; it’s also uniquely well suited for Matrix-like gameplay that can’t be delivered through any other medium.

Maybe one day the stars will align and we’ll finally see the famed franchise make the leap into real… virtual reality. Or maybe it technically already has….