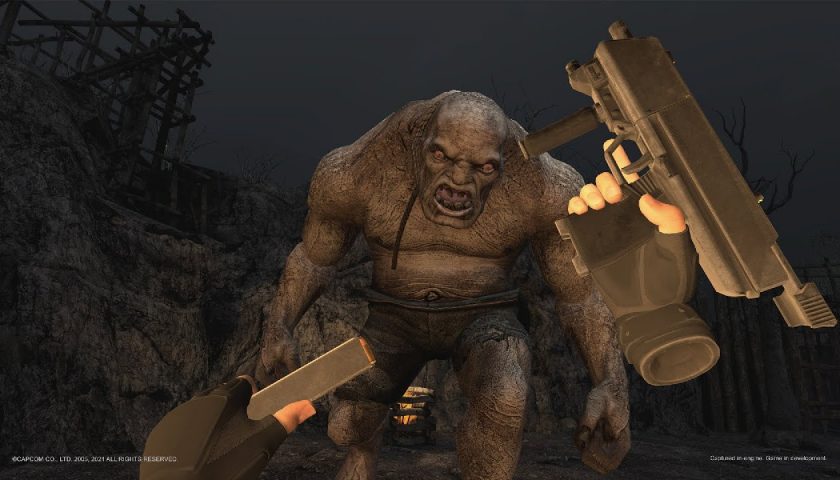 Just in time for Halloween, Oculus announced today that the VR port of the award-winning survival horror game Resident Evil 4 (2005) is set to release on October 21st.

Resident Evil 4 is arriving exclusively on Oculus Quest 2 (re: not the original Quest) when it launches next month. The game has been completely reworked for virtual reality in the first-person by Capcom, Oculus Studios, and Armature Studio.

The last time we got a look at the game was back at the Oculus Gaming Showcase in April when a few pre-alpha clips were unveiled. Now the developers have tossed out a new extended gameplay trailer (above) and a few more images to go along with it too. There’s still only a smattering of info out there, however the team reiterated today that there will be a few notable options to choose from to make the experience fit your playstyle.

Resident Evil 4 for Quest 2 is said to have both standing and seated modes, and locomotion options will include teleportation, room-scale movement, and smooth forward movement via the analog stick. A full upper-body rig will also allow for dual-handed interactivity, Armature says, letting you swap out weapons by grabbing them off your body.

As a part of the whole first-person rejiggering of the game for VR, the team has smartly re-engineered weapons and items to be physical objects, which ought to make handling them a more immersive experience. As a result, pulling levers, moving puzzle pieces, and physically loading weapons make it look like a VR-native experience.

In the new trailer you can also get a glimpse at a good slice of the bloody carnage, something that’s bound to be gruesome in VR. We’re just hoping the developers have found a way to make cutscenes just as enthralling as the new gameplay footage, because there’s a pretty substantial amount of those in the original game and they have the potential to hinder immersion to some degree when directly ported as video files to VR games. Whatever the case, we’ll be getting our hands on the game before launch for our patented deep-dive review.