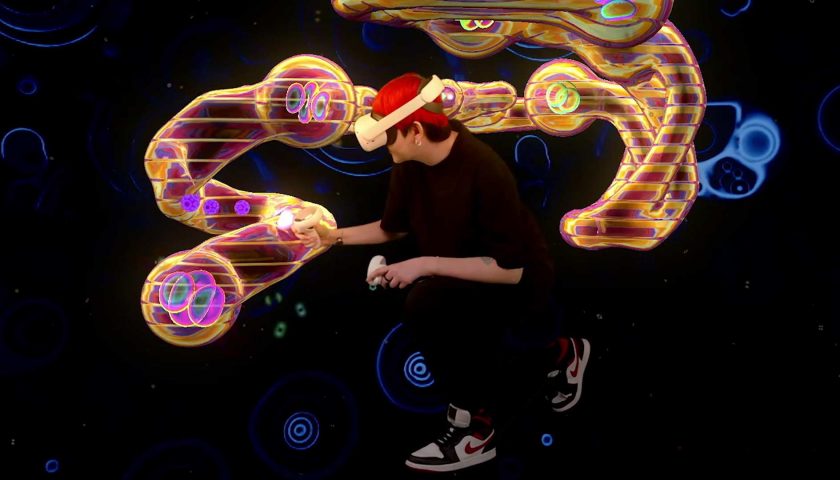 Squingle, the psychedelic puzzle game for PC VR and Quest, is one of those “so out there, it’s difficult to explain” type of experiences. And as VR games creatively explode in every possible direction, the more vital it becomes to pop a human into frame to visually explain just what the hell is going on and why it’s so cool.

Squingle is admittedly difficult to pigeonhole just by looking at some screenshots or even a few gifs. We already have a good 450 words on the subject too, and it still may not be enough. It’s not that Squingle is overly complex, it’s just that the clever little ball maze-puzzle-thing is simply better understood in-headset.

To see what we mean, take a look at the original pre-release trailer:

Maybe it’s the undulating intestinal pathways, or the shimmering patterns that seem to change with every touch as you lead orbs around its increasingly circuitous routes. It’s so otherworldly and seemingly chaotic that you don’t implicitly know what to expect when looking at Squingle, whereas a different VR title might be easily explained with something as simple as a screenshot of a zombie and a gun. It’s a lot to take in.

If you were looking for some quick clarification though, the game’s new mixed reality video does a much better awesome job of shedding more light on why Squingle is so cool.

Mixed reality trailers like this aren’t new; Valve tossed out one of the best marketing pieces for VR we’ve seen, and that was way back in 2016 when they were hyping the general public for the original HTC Vive. In the following years, mixed reality capture has grown leaps and bounds, with many studios getting wise to third-party software like LIV—an easy to integrate mixed reality capture platform that many (many) studios use today. Still, there are plenty of games out there that would benefit from this sort of immersive, third-person view.

This is precisely why Meta is starting to push its own mobile mixed reality setup, which critically doesn’t require specialized equipment outside of a Quest and an iPhone. It’s easier for streamers looking for views, and anyone hoping to show their grandma what all the fuss is about. It’s not as good, or as full-featured as LIV, but the utility here is clear.

This is all happening while the medium is celebrating some all-time highs in terms of growth. Steam’s monthly hardware survey last month revealed that an estimated 3.4 million monthly-connected VR headsets are in the wild.

This will undoubtedly bring a wider swath of would-be VR developers, some of which likely want to make something they’ve never seen or experienced before—typically meaning unique, but difficult-to-explain mechanics. And using an actual human being as an anchor to visually tell what’s happening just seems more relatable than a ghostly avatar outline or claustrophobic first-person view. The protagonist is clear, so the objective becomes more apparent.

If you’re curious to learn more about Squingle, indie developer Benjamin Outram has published it on Quest via App Lab and on PC VR via Steam. You can also download the Quest demo or SteamVR demo for free if you’re still skeptical.

TougeVR is quietly making some of the highest quality mixed reality cinematics out there, and has a tutorial series called ‘Mixed Reality Masterclass’ which guides you through the process of mixed reality filmmaking. Check out TougeVR’s channel for more.