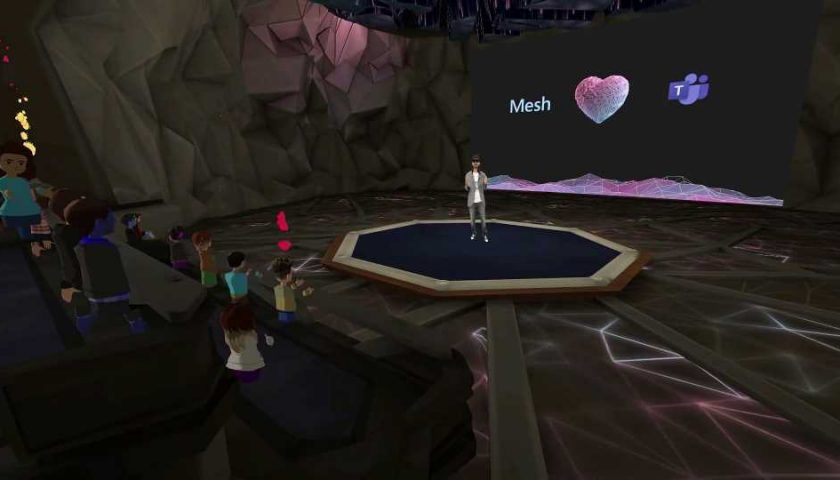 Last week Microsoft became the first major tech company to host a keynote presentation fully in virtual reality. Despite many moving parts, the company managed to delivery a seamless, immersive presentation that could mark the future of this sort of marketing communication.

In the last 20 years, the ‘tech keynote’ has gone from hasty PowerPoint presentations in front of small groups to major multimedia productions that form the cornerstone of many marketing playbooks, often concluding with major announcements and product reveals.

Last week, Microsoft took the next step toward one possible future of the tech keynote when it delivered the opening presentation to its Ignite 2021 developer conference fully in virtual reality.

While far from the first company to deliver a virtual reality presentation, Microsoft—with its $1.73 trillion market cap—is surely the largest company to do so. And its presentation was perhaps the most ambitious and most polished we’ve yet seen, featuring custom-built scenes that stitched together immersive and traditional media alike. Adding to the complexity of execution is the fact that the keynote was designed for viewing both in VR and via a non-immersive livestream for a wider audience.

If you want to see the entire thing you can watch a recording here. Below we’ll overview how it all went down from the in-VR perspective.

A Stage Set in Altspace

Microsoft hosted the entire Ignite keynote inside of Altspace, the social VR platform the company acquired back in 2017. Because it’s Microsoft’s own product, the company had the leeway for a much more unique production than would have been possible in an off-the-shelf solution.

Anyone, anywhere in the world, with access to Altspace was able to join the presentation and get a front-row seat to the keynote. The setup was as you might expect: a seating section for the audience and a stage to frame the action. And while hundreds of users attended the event in virtual reality, they were divided up into many instances of roughly 25 audience members. So while the audience was split between many rooms, they were all watching the exact same presentation unfold at the same time.

To be clear, the Microsoft Ignite 2021 virtual reality keynote was not just a little experiment for the company. This was a large enough event expected to be viewed by enough people to warrant Microsoft CEO Satya Nadella as the headline speaker, who outlined the company’s vision for the future of enterprise computing. And while they didn’t go so far as bringing Nadella himself into virtual reality (his video segment was played on a large movie-theater-like screen), it was Nadella which was the first to announce Microsoft Mesh, which the company hopes will drive immersive computing and collaboration, bringing about a future where virtual reality events—like the Ignite 2021 keynote—are commonplace.

Alex Kipman On Stage ‘In Person’

While the virtual reality audience of the keynote was all represented by cartoon-ish Altspace avatars, HoloLens visionary Alex Kipman was shown on stage in a life-like representation wearing a HoloLens 2 headset. Around him was a stage designed to look like a coral reef, with the surrounding scenery transformed to make it look like the entire stage was underwater.

From a technical standpoint, it appears that Kipman’s visual representation was achieved with a green-screen video capture which was shown to the audience as a ‘billboard’ texture that rotated to face each viewer no matter their position.

Up close, this technique would have looked very fake in VR, but they smartly kept Kipman just far enough away from the audience that the flatness of his being wasn’t really noticeable. Doing it this way also meant the capture could be done with commodity hardware and software, while also retaining a high level of visual fidelity and capturing all elements of Kipman’s real-life mannerisms.

While Kipman was speaking, the area above and around him slowly filled with schools of fish and even a huge whale-shark which glided above him smoothly as he was making his presentation. At a certain point the audience saw a pop-up allowing them select a fish which would swim toward the stage and join the other schools of fish in their rounds. This was the first interactive element of the VR keynote, but more interesting interaction was yet to come (more on that further below).

As Kipman spoke, a large screen behind him underscored his points with both pictures and video imagery, and occasionally he would fade out to give center stage to a video portion of the presentation.