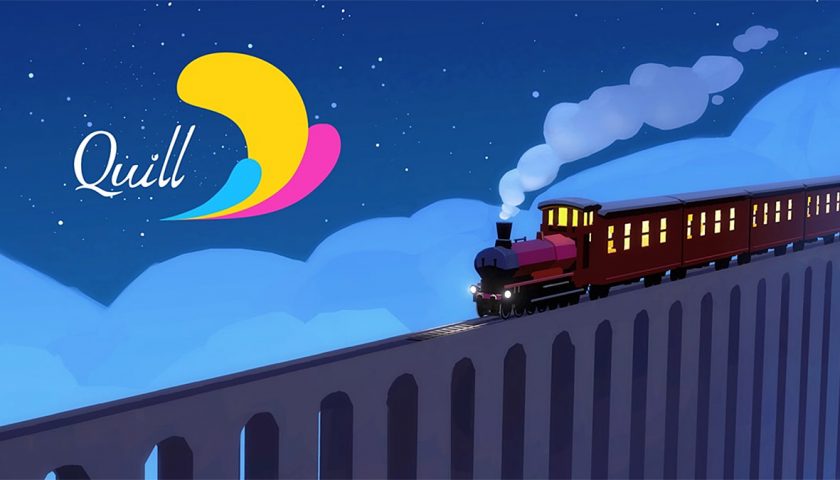 Quill is a brilliant VR drawing and animation app originally born within the now shuttered Oculus Story Studio. The app continued on after the group’s closure, but with seemingly few long term plans for the app, Facebook has decided to spin it out by handing ownership over to its original creator. As part of the transition, Quill’s proprietary file format is being open-sourced.

In the early days of Oculus the company started internal groups like Oculus Story Studio which was tasked with exploring cinema through the lens of VR. One of the films the group released was Dear Angelica (2017), which was played back in real-time with a unique painterly look. That VR film was made possible by an internal tool that allowed artists to use VR headsets and controllers to draw and animated in 3D. Eventually Oculus moved to release the tool to the general public for VR drawing and animation; that’s the short story of how Quill came to be.

Quill uniquely combines the artistry of hand-drawing and hand-animation with the benefits of CGI, enabling some seriously beautiful works of VR cinema.

That’s why it’s something of a shame that Facebook has announced it’s giving up on the app. Seemingly uninterested in any long-term play with the brilliant tool, the company is handing off ownership.

But only time will tell if this is an end or a new beginning. Thankfully Facebook opted to give Quill away to its original creator—Iñigo Quilez and his company Smoothstep—which will maintain the app going forward. The app will continue to be available on Rift under the name Quill by Smoothstep. The Quill Theater viewer app on Quest will continue to be available but generically rebranded as VR Animation Viewer.

While Smoothstep hasn’t said much in the way of its long-term plans, the hand-off from Facebook came the same day as a new patch for Quill, version 2.9, which made some small improvements and fixes.

Seemingly in an effort to unbind Quill from its proprietary nature, the hand-off has also brought an open-source version of Quill’s unique file format called IMM. Facebook says it hopes the move will bring an “expanded creator and audience ecosystem for VR animation.”

Indeed, one of Quill’s key challenges was distribution. Unlike making a flat film which can easily be viewer via built-in players on literally billions of devices, the proprietary nature of Quill has meant that native playback of the artwork is ‘stuck’ on Oculus headsets only. The only other approach is exporting to a more interoperable format and then use other tools to render and distribute your project.

Now that IMM has been open-sourced, it should be possible for people to build IMM players for more devices, which could mean more wider distribution. We’d love to see a version built with WebXR so that Quill works could be seen easily by a wider range of devices from VR headsets to smartphones. With the open-source format, it’s also possible that other VR artwork tools could support exporting to IMM.

With Quill in the hands of Smoothstep, the app could also overcome another issue: platform exclusivity. Because Quill was made by Oculus, there was little hope that we’d ever see a version for other VR platforms, like PSVR or SteamVR. With the app now owned by an independent company, that might be a real possibility for the future, which would give more artists access to this excellent tool.

The path of Quill is strikingly similar to what happend with another VR art tool that was also started at Oculus, Medium. Apparently not interested in any long-term plans with the tool, Facebook opted to sell off the project to Adobe, which has recently incorporated it into its latest 3D creation tools.