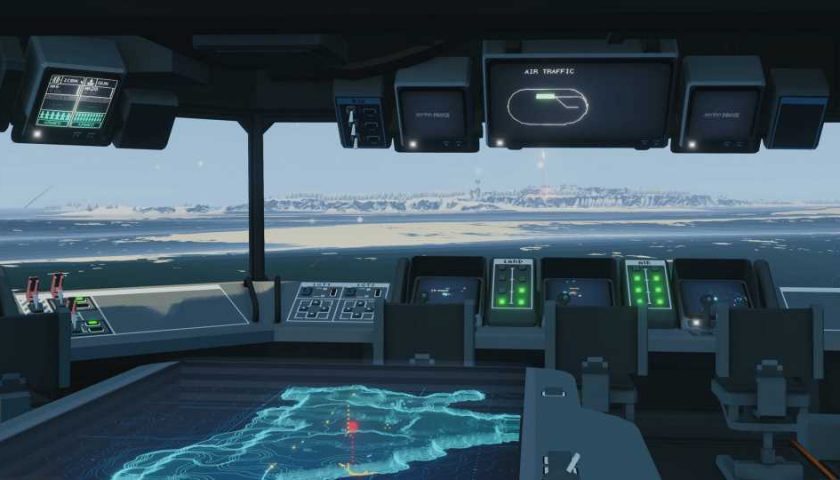 Carrier Command 2, a modern sequel to the 1988 game, puts players in control of a futuristic aircraft carrier, allowing up to nine players to manage the ship’s many systems from the bridge. Developer Geometa today announced the game will get full VR support, including cross-play with the non-VR version. Both versions will be bundled together and are expected to launch in early access later this year.

Carrier Command 2 is a PC-based reboot of the now 33 year-old Carrier Command which crosses elements of vehicle simulation with real-time strategy. Instead of just interacting through a simple UI, Carrier Command 2 is played in first-person with the player taking position on the bridge of the carrier itself, with access to the ship’s many functions laid out spatially between various control panels and computer terminals.

In announcing today that the game will see full VR support, developer Geometa said it hadn’t originally planned to support VR headsets, but opted to do so after hearing from “many, many players who have been in touch to ask for the VR version.”

“While VR was not originally in our roadmap, the literalism of the diegetic interfaces within the game has made it very easy to introduce VR to Carrier Command—this is the same game, with the same balance and same mechanics!”

While the game can be played solo, there’s nine distinct role on the bridge, each of which can be filled by a real player. And although Carrier Command 2 VR and the non-VR Carrier Command 2 will technically be separate games, the studio says it’s bundling both versions together indefinitely for the same price. Both versions of the game will also support cross-play, meaning you can have any combination of VR and non-VR players controlling the various roles on the bridge. Player-vs-player multiplayer is also supported. “In the VR edition, you can control all the same systems, vehicles, and controls, from the bridge of the ACC Epsilon Carrier. Use your VR controllers to move and interact with controls, and remote pilot vehicles. Use the holomap with 3D vision. Move around the bridge, use screens, staff the stations, take first person remote control. Play singleplayer, cooperative campaign and PvP multiplayer!” the studio writes.

While the game was originally expected to launch in early access in the Spring, the studio has pushed the a release into late Summer, with a specific release date expected to be announced next week.

Carrier Command 2 is being published by MicroProse, a game developer and publisher behind dozens of classic strategy and simulator titles from the ’80s and ’90s. While the studio was shuttered in the early 2000s, was recently rebooted. In addition to Carrier Command 2 the publisher is also in development of The Mighty Eighth, which it has described as a “VR-first” flight combat simulator where multiple players will work together to pilot a WWII bomber.