The average person is distracted every 40 seconds when working in front of a computer. Indeed, even the most productive workers get only 11 minutes on average between interruptions. Increasingly, with experiments like Digital Wellbeing and Screen Time, tech giants are advancing usage limits as a potential remedy. But if you ask Mathias Mikkelsen, CEO and founder of Oslo, Norway- and Pune, India-based Memory, our attention deficit calls for a uniquely digital solution.

Dewo (pronounced “dee-woe”) — a  “personal assistant for deep work” that’s available starting today — is the brainchild of the 45-person team behind Timely, Memory’s first product, which launched three years after Mikkelsen bootstrapped the company by selling his apartment. A productivity-tracking tool that taps AI to create up-to-the-minute time sheets on employees’ behalves, Timely quickly found success, racking up thousands of paying customers across over 160 countries and attracting the attention of investors like Concentric, Investinor, 500 Startups, and SNÖ Ventures. (Memory raised $5 million in an October 2018 venture series, which brought its total raised to $6 million as annual sales crossed the $2 million.)

In point of fact, Dewo’s design was informed by the AI model underpinning Timely, which privately tracks everything users do — including the files they work on, websites they visit, calendar appointments they create, and more. Leveraging Memory’s eponymous Memory app, Dewo analyzes a person’s work in real time and scores it against a scale ranging from “complete distraction” to “intense deep work.” (Here, “deep work” — a phrase coined by Cal Newport, an associate professor of computer science at Georgetown University — refers to the ability to focus without distraction on a cognitively demanding task.) 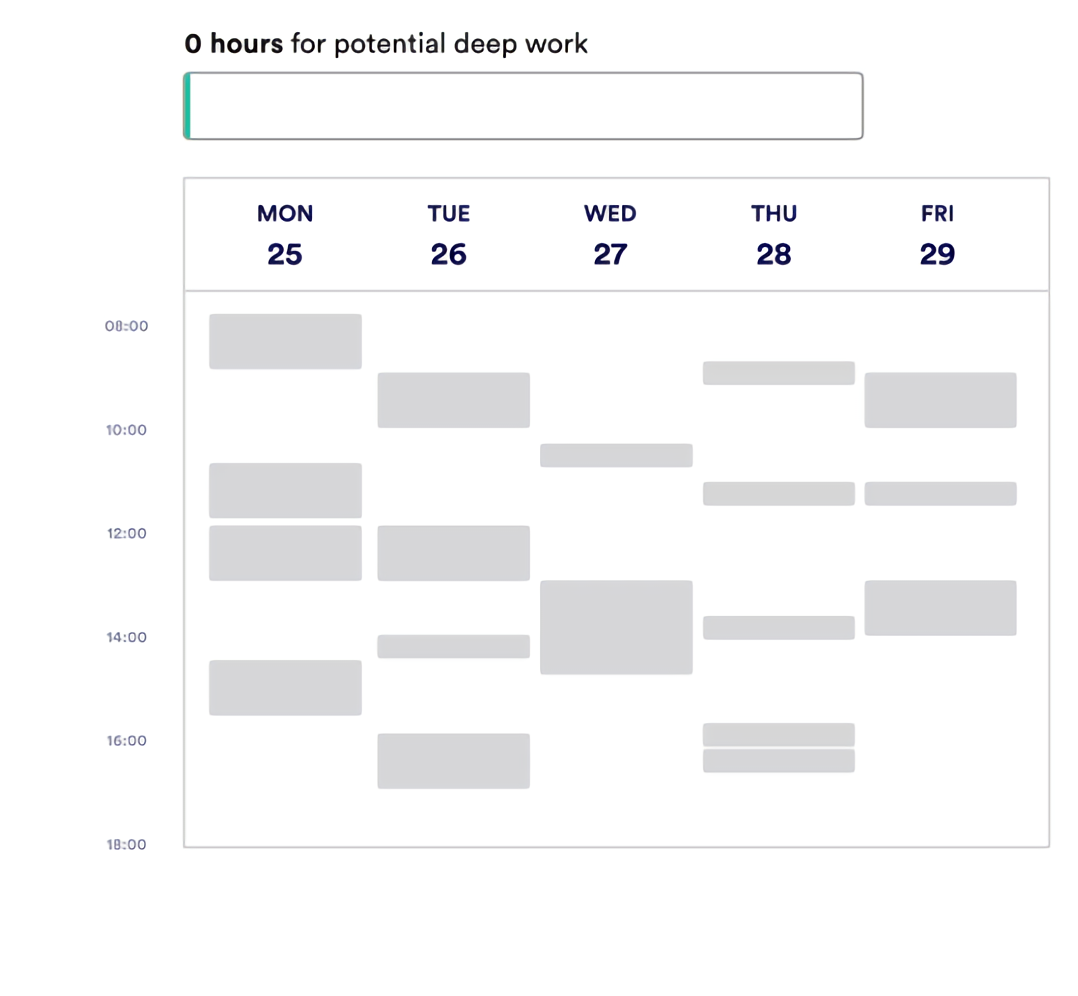 Above: Dewo can rearrange calendar appointment on your behalf, if you so choose.

Dewo tracks web and desktop activity to learn the circumstances under which the person performs their best work, and in response, it recommends actions and pointers to replicate those results. For instance, when it detects that someone is actively engaged in deep work, it automatically silences any distractions that might disrupt it, partly by muting app notifications and toggling on Do Not Disturb mode within chat apps like Slack (on desktop and Android). And in the coming weeks, it’ll offer to rework calendars courtesy of integrations with Outlook and other platforms, moving meetings (including those of team members) to maximize the time available for productive work.

It’s more complex than it sounds. A clustering algorithm helps Dewo predict which apps and activities are useful to a person, identifying groups of users that weren’t previously known (e.g., social media managers who often use Facebook and Twitter). Activities are assigned categories based on a global model and the type of cluster to which users belong, and every minute of the day is assigned a productivity score to evaluate work quality.

A simpler version of the clustering algorithm ​​helps Dewo to predict if a person is nearing deep work, so the tool knows when to block notifications. And when its calendar rescheduling feature goes live, Dewo will tap an AI system that’ll give weight to every 30 minutes of a week, relating to how likely a user is able to get deep work done and their work calendar history. (Dewo will always tries to find some time for lunch, and it’ll run a larger algorithm on Thursdays for the following week that’ll take into account all meetings an entire team is allowed to move.)

Dewo provides insights intended to reveal helpful — and harmful — work patterns through a dashboard. For instance, it’ll alert you to the amount of time spent responding to emails or checking social media in a day compared with the days preceding, plus which apps you used the most often in the course of a work week. It’ll additionally show how frequently you switched among various apps on the hour, and the number of meetings in which you participated versus your average as well as the physical places you tend to be the most productive (such in the office or at another location such as a café). 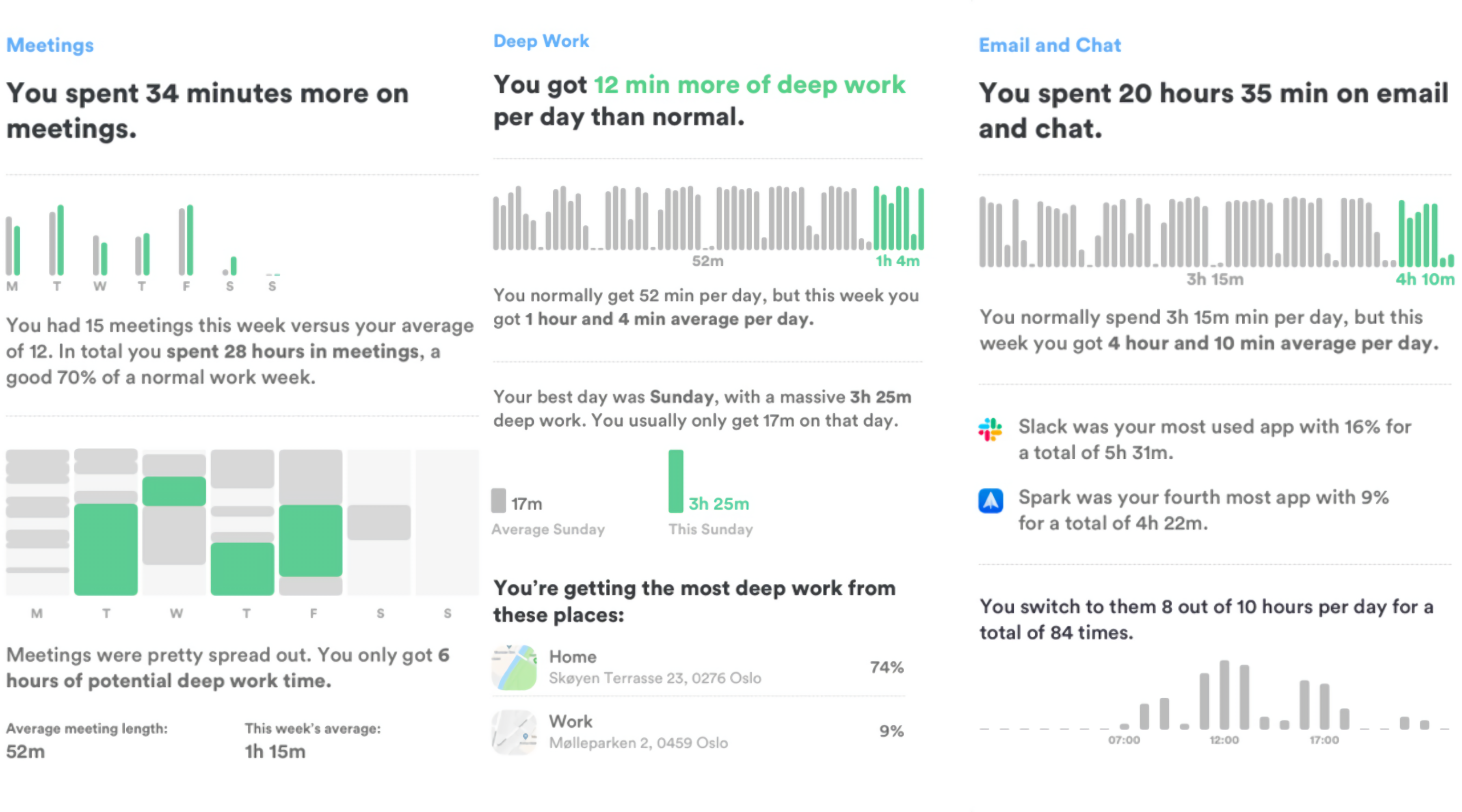 Above: Dewo reveals insights about the way you work.

As with Timely, Memory claims Dewo and its data remain private and secure, but the tool’s reports can be shared with employers or clients on an individual basis. Mikkelsen envisions this reporting helping to build cases for more productive work arrangements for employees, like flexible hours, smarter meeting planning, and new schedules.

“Work as we know it today is broken,” he said. “The virtually-connected workplace contains a never-ending supply of distractions in the form of notifications, emails, and social media, too often at the cost of productivity.”

While Dewo is currently free to use, Mikkelsen says that it might gain premium features “far in the future.” Given the tangible cost of distraction —  work lost to emails and meetings cost U.S. businesses an estimated $650 million per year — it likely wouldn’t be hard to find paying customers. That said, Mikkelsen considers the tool more a public service than a money-making venture.

“I believe that in ten years time, we will all look back at this current era of digital distraction and think ‘how on earth did we get any real work done?!’” he said. “Many of us have no idea just how much we are being distracted at work and the impact this has on our output. Dewo will be the angel on your shoulder to fend off distractions and protect your time, and we can’t wait to see how this will transform the working lives of individuals around the world.”