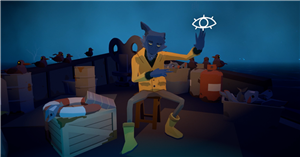 You probably don’t think much about what your eyes are actually doing while you’re playing a video game. Before Your Eyes forces you to do so, however, as it’s played with a standard mouse, your webcam, and your real-world, physical eyes. In this game, you never quite know what’s going to happen anytime you blink.

You play as Benjamin Brynn, who’s being taken to the afterlife by a weary humanoid cat who fishes souls out of the water in some kind of waiting area after death and brings them to the gatekeeper. Brynn has to tell the story of his life to the talking, bipedal cat before they arrive at their destination.

It’s not enough to be entertaining, however. He has to be truthful about his tale, too. Getting caught lying about your life, and how you came to cross over to the other side, means that you’ll be turned into a bird and stuck with the rest of the lost souls for eternity.

At first, I was skeptical about the quality of the game’s storytelling. As the memories flowed, I saw the story of a young man whose musician mother had pushed him into music as well. In my playthrough, Brynn’s musical ambitions stalled, but he later realized he had a gift for visual art. Brynn was ultimately able to paint portraits of his mother so moving that her musical work was rediscovered after her own death, and she too was celebrated as a genius.

The story of Brynn finding his own passion, losing his mother, connecting with his father, and becoming famous while also being able to finally fulfill his mother’s ambitions seemed too neat at first. I wasn’t the only one who was skeptical, either. Soon I realized there was more to discover.

Brynn’s tale is told mostly in flashback, for obvious reasons, and as I watched it play out, I could make some limited decisions by putting the cursor on one of the eyeball icons on the screen and blinking to make my selection. Once the interactive portion of a moment is over, a metronome begins to tick back and forth at the bottom of the screen, even if characters are still talking. You can stay in that moment as long as you’d like … as long you can keep yourself from blinking. Blink, and you’re removed from the memory and sent someplace else.

Losing track of your eyes, even due to getting wrapped up in the story, is always a bittersweet experience. I often found myself struggling to keep my eyes open, despite how much they burned, just to spend a few extra seconds with someone or to listen in on more of a conversation.

Learning about another aspect of Brynn’s past, only to be forcibly removed from the memory because I lost myself and blinked, was always a shock. I often wished I could go back to get the rest of the story, to spend a little more time in the good memories — which is exactly the point. We like to think we have some control over our lives, but we don’t get to choose how much time we have. The blinking mechanic never let me forget that fact.

Later in the game, this mechanic gets flipped on its head when you have to keep your eyes closed and focus on someone’s voice to learn more about yourself. There are a few other, smaller surprises in how the eye-tracking mechanic is used, but I don’t want to ruin them here.

Using the player’s own eyes for control is a clever way to add meaning to an action that amounts to a mouse click. No matter how much you want to stay in the memory of that one night you snuck out to look at the stars, at some point you are going to have to blink, and that memory will be taken away. I suppose you could avert your eyes or try to mask a blink if you want to cheat, but my laptop’s camera did a good job of detecting when my eyes were open or closed, and it’s a lot more enjoyable to take the ride as designed by Before Your Eyes’ developers. They have something to say here, and part of that message is delivered through the mechanics themselves.

After playing through the entire experience, I doubt I’ll play it again, even though there are choices to be made in the narrative that I suspect could lead to different outcomes. The story I created was the story that felt right for me; exploring what might have been feels like it would go against the spirit of the game’s final act. Although some aspects of the story felt a little mawkish or emotionally manipulative, the thematic power of showing players how we’re nothing but the collection of stories we create is both crushing and freeing.

Crushing because it means the world is more powerful than us, and we are often at the whims of fate. But freeing because we can decide if our in-game mother pushed us into music with such fervor because she was still trying to please her father, or because she loved us and became our biggest cheerleader. We can decide if that night alone by the lake with the neighbor made you best friends or romantic partners.

Our stories, and how we frame them, decide what our lives are and how we feel about our own path through life. One person’s redemption may be seen as their damnation, if you spin the details the right or wrong way when telling the story to someone else.

So when Behind Your Eyes’ finale began, and I blinked the tears out of my real-world eyes as my version of Brynn’s story was told, the view also changed. Here was where I came from, and who I was, described in a way that didn’t paper over anyone’s mistakes, while also not letting them off the hook for their decisions. The final version of my story felt human, and fair, even if Brynn’s father wasn’t fleshed out nearly as well as his mother.

I had regrets about some of my in-game decisions, but not many. I was put in a lot of hard situations, after all, but I did my best. So did my family and friends. If they deserve forgiveness, then so do I.

Once my story was over, once I understood how I really got there and got a better sense of the people who loved me into existence, I felt satisfied. I closed my eyes, and got ready for whatever came next as the credits rolled.

Before Your Eyes will be released on April 8 on Windows PC. The game was reviewed using a download code provided by Skybound Games. Vox Media has affiliate partnerships. These do not influence editorial content, though Vox Media may earn commissions for products purchased via affiliate links. You can find additional information about Polygon’s ethics policy here.