My partner and I started joking about names for potential future children before bed last night, spurred by a meme about pop culture that’s ruined people’s names.

The name John Leguizamo popped into my head, not as a name that had been ruined by pop culture, but as a way to ruin a potential child’s life. Not because John Leguizamo of the 1993 Super Mario Bros. movie is bad — he’s great! — but because her full first name would be John Leguizamo. We spent the next 30 minutes riffing on the scenarios that would be weird for this future child. (Spoilers: It’s all of them.)

It’s the sort of dumb, embarrassing things we do that are only funny to us, in our private moments. It’s our very specific brand of humor, which was slowly shaped during the years we’ve been together. And this sort of thing isn’t unique; plenty of relationships are built upon shared language and humor. It might be gross or embarrassing to anyone else, but it also creates intimacy that’s specific to us.

In Suzannah Weiss’ “The Embarrassing Private Language of Couples,” published in The Cut in 2018, the writer found that couples cherish these moments as a developed intimacy, something family studies researcher Carol Bruess called “a culture of two.”

“When couples have their own language rituals … they feel like they know one another in a way that others don’t, and that they have a strong connection or bond to each other,” Bruess told Weiss. “They have their own little private world.”

It’s those worlds that are so rarely tackled by pop culture in general, but almost never in video games specifically.

We Met in May, from Cibele developer Nina Freeman and collaborator Jake Jefferies, with music from composer Ryan Yoshikami, is a video game that opens up a couple’s “culture of two” to its players. It’s an intimate look into the weirdness of dating, and the humor that’s created through implicit collaboration while you’re getting to know your partner.

We Met in May is a collection of “vignette games,” capturing four small moments in a relationship. The game’s Steam page states that these experiences are culled from the developers’ own lives. The characters in We Met in May are called Nina and Jake, too, and seem to be created in the general likeness of the real-world developers.

Each minigame centers on a single ephemeral moment in one of four dates as the relationship progresses: “Nothing to Hide,” where Jake visits Nina’s apartment for the first time; “Beach Date,” set on a beach with wine, chips, and lots of sand; “Strike a Pose,” with Nina trying on outfits at the mall; and “Dinner’s Ready,” a silly, intimate moment between the couple as Jake’s making dinner.

Each of these games are short experiences, around 10 minutes or so, that center on one mechanic. I’m to decide what Nina’s willing to share with Jake after inviting him over to the apartment for the first time in “Nothing to Hide.” Will he think the anime body pillow is weird? Do I hide the bra slung over the computer chair?

Essentially, there’s one thing to do in each of these games, a mechanic that changes with each of the stories. In “Nothing to Hide,” I decide what Nina shares with Jake and what she doesn’t by moving Nina into different positions, clicking once as a timer counts down, to shift the frantic character into a position that either hides a potentially embarrassing object, or doesn’t. The stakes are low; Jake is unphased no matter how I’ve decided to curate the room tour. The panic was internal, and likely needless, which sure feels relatable. 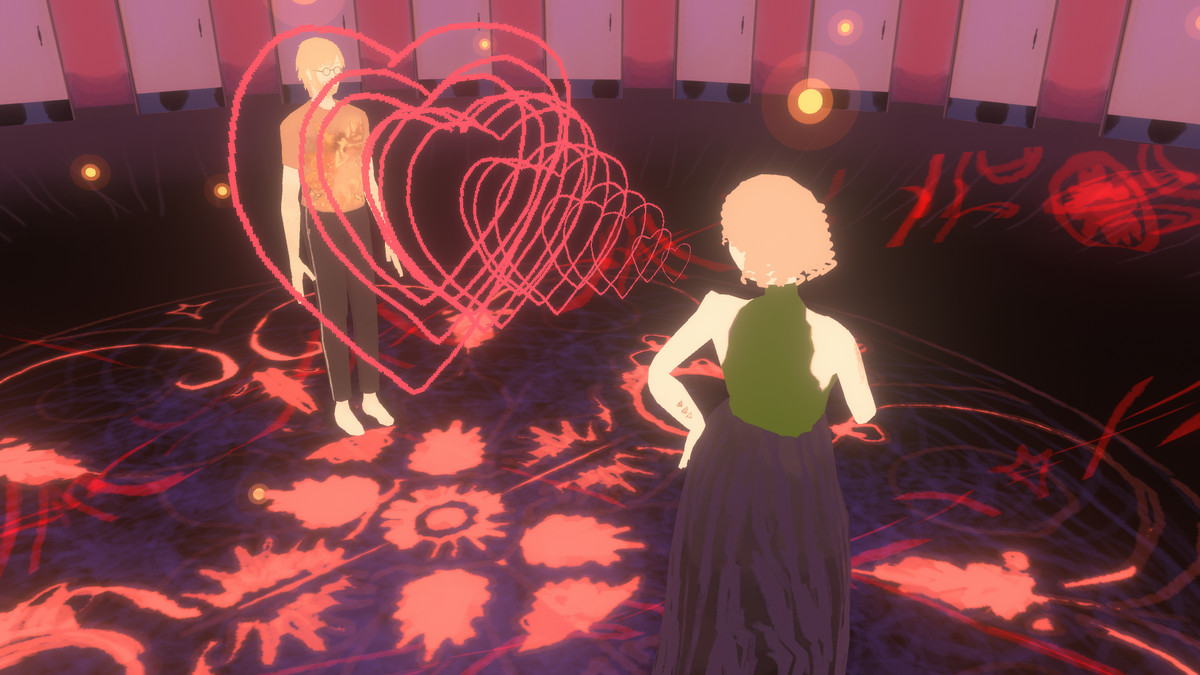 I can see Nina and Jake’s rituals forming in the four vignettes of We Met in May. Whereas “Beach Date” is setting up the silliness of dating and the awkwardness we sometimes feel when we don’t know how to interact with each other in every situation, “Strike a Pose” is where I found a warmer familiarity between the two.

“Strike a Pose” is, essentially, a dress-up game within We Met in May. Before Nina comes out of the dressing room, I choose the perfect pose for her, all magical girl–style moves she performs as emerges. Each is named, like she’s done them before, and she knocks Jake out with her parade of outfits.

There’s nothing to really win here — aside from each other’s love, am I right? — but the game lets me witness a couple creating their own shared language of jokes and interactions. And then it brings in the nipple-flicking.

That nipple-flicking is also the goal of “Dinner’s Ready,” the last of the four vignettes in We Met in May. (Technically, you don’t have to play in order, though.) As Jake’s making dinner, Nina imagines all the ways she can flick his nipples, which I can then act out through a button-tapping game. Jake tries to dodge my hands, but I’m just too fast. He doesn’t leave me over this act, nor does it solidify the relationship in a way that feels concrete. It’s just a thing that happened, a snapshot in time.

The progression from “Nothing to Hide” to “Dinner’s Ready” perfectly demonstrates a relationship’s comfort level increasing. Where Nina scrambled to hide her anime titty posters in “Nothing to Hide,” she’s reveling in the act of nipple-flicking in “Dinner’s Ready.” The two people have become much more comfortable being themselves around each other, which is a nice, and again, rare thing to see in a modern game. 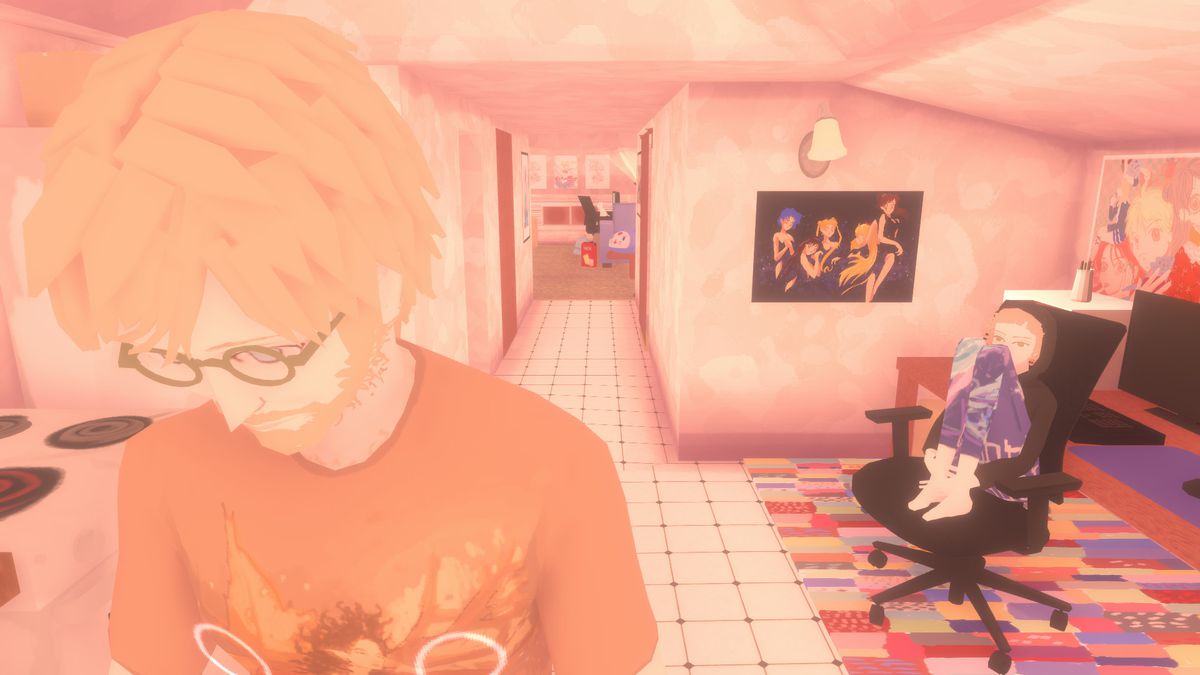 The four vignette games took me roughly 40 minutes to play through, in total. If anything, I would have liked to see more of these moments, the moments in people’s relationships that are usually kept secret. We Met in May feels like something I shouldn’t be able to see, and it feels gluttonous to ask for more. It would be too easy for the game to cross a line into uncomfortable voyeurism, but instead it stays light and non-judgmental throughout.

Perhaps that’s why it had to be so short; anything longer and I would have been able to connect more dots, and maybe decide I know where the relationship is going. Instead I’m left with a brief glimpse into something that doesn’t show me quite enough for me to feel comfortable guessing where their relationship is going. Which makes sense; it’s likely they don’t know, either. Sharing that uncertainty and hope turns me into an invisible, yet seemingly welcome, third wheel in their time together.

So much of the game is familiar, despite being so specific to its characters, and it’s the slapstick-style comedy that accurately models so much of the early days of getting to know someone, before settling into their rhythms, and learning their likes and dislikes, as well as your own. This isn’t my particular language, but at least I feel like I could recognize most of the verbs by the end of the game.

After all, most relationships have their own John Leguizamos.

We Met in May is now available for $4.99 on Windows PC and Mac. The game was reviewed using a final PC download code provided by the developer. You can find additional information about Polygon’s ethics policy here.