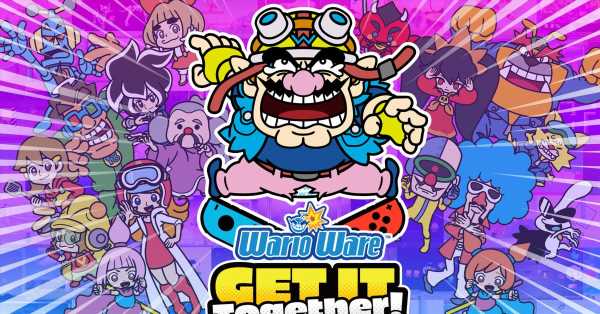 The WarioWare series has spent years asking players to endure gauntlets of the same microgames over and over. WarioWare: Get It Together! on Nintendo Switch asks something similar, but with a major wrinkle: playable characters.

WarioWare: Get It Together! tasks you with the usual multifarious microgames, such as counting items, tweezing hairs from a statue, or escaping a flooding dungeon. But instead of flipping your Game Boy Advance on its head or swiping a stylus across a second screen, like in past WarioWare games, Get It Together! asks you to control one of the members of Wario’s posse — or the big man himself — in a rotating pool of characters you select. This new format adds an impressive layer of depth to the WarioWare universe, but ends up proving that too much chaos can be a bad thing — even for WarioWare.

I can fly around as Wario — in his stylish purple shoes and pink pants, with his newly equipped jetpack — using my shoulder charge to knock things down or solve puzzles; simple, elegant, Wario. The introductory sessions give me a feel for how Wario’s direct input changes the microgame blitz. Instead of clicking a button to count how many runners I see on the track, I need to shoulder-charge an in-game counter until I reach the magic number.

Wario has to charge into this toothpaste to get it out.
Image: Nintendo EPD, Intelligent Systems/Nintendo

Each microgame adventure starts with selecting a roster of characters — usually between three and five — and I’ll randomly swap between them until I run out of lives. As I jump into the inferior shoes of the rest of WarioWare’s rogues’ gallery, I’m struck by the mechanical differences between the playable heroes.

Characters like Cricket are stuck on the ground and must jump to interact with objects. Dr. Crygor swims through the environment, automatically interacting with any item he touches. 9-Volt is constantly moving side to side, and I have to time his yo-yo throw to interact with items in each microgame. 18-Volt can’t move at all, except when grappling to special hooks strewn throughout the environment.

All of WarioWare: Get It Together!’s characters can compete in every single one of its microgames. And while some characters have clear strengths and weaknesses, it’s impressive to see how co-developers Nintendo and Intelligent Systems made tweaks to each microgame to ensure that characters like 9-Volt or 18-Volt can still stand a chance against their more mobile co-workers.

But the roster also adds a tedious layer of complexity. Having to select my characters is a time-consuming addition to each microgame gantlet, and a process that forces me to answer an unwanted question: Do I want chaos? Or do I want to succeed?

More often than not, I choose the latter and find myself gravitating toward a cadre of similar characters with the ability to fly. The more similar the characters, the easier time I have adjusting to each microgame, and getting a new high score for that category. So why would I ever choose some of the game’s more limited characters, like 9-Volt or 18-Volt, over the ones that offer more exact control?

Certain characters make games too simple: Wario’s ability to fly over gaps lets me instantly complete some microgames, which is funny, but so many characters can do this that it hardly feels like using Wario is “cheating.” Other characters make a simple action, like peeling a face mask off of someone, too complex just by their inability to move. Because the characters are so diverse, every microgame is beatable, but none of them feels tightly designed. Most of them seem either too trivial or too frustrating, depending on my character. The game rarely hit that fun/chaotic/strategic sweet spot for me, often becoming boring or frustrating instead.

Get It Together! feels like it’s catering to two types of players. There are those who will just select the good characters — my initial instinct — to aim for high scores. And there are those who will purposefully pick up the tougher characters to challenge their own mechanical skills. But the game doesn’t serve either of these players fully. When I played solely with easy characters, I got bored flying over obstacles. And each time I lost with one of the more bizarre heroes, I felt like the result was out of my control.

Whether I’m using a broad pool of heroes or just my chosen favorites, the game also serves me a random character and a random microgame in each round. And no matter what kind of challenge I’m looking for, losing an easy game because my character literally can’t stop jumping is obnoxious. I’m never confused about what I need to do in a microgame, but I’m often unsatisfied at the end of my run.

Get It Together! adds too many steps to the WarioWare process, and the result is a more detrimental form of chaos than I’ve come to expect from this series. I’m now assessing which microgame I’m playing, remembering the character I’m controlling, mapping that character’s play style to the microgame in question, and fumbling my way to eventual defeat. In many cases, I circumvent the microgame’s intended solution entirely.

WarioWare has always succeeded because it’s weird and easy to pick up. WarioWare: Get It Together! is loaded with the same silly charm, charisma, and random nonsense as the rest of the series. Tonally, it’s exactly what I want from the Wario branch of Nintendo. But Get It Together! gets in its own way, and mitigates one of the series’ best features: simplicity.

WarioWare: Get It Together! will be released Sept. 10 on Nintendo Switch. The game was reviewed using a pre-release download code provided by Nintendo. Vox Media has affiliate partnerships. These do not influence editorial content, though Vox Media may earn commissions for products purchased via affiliate links. You can find additional information about Polygon’s ethics policy here.