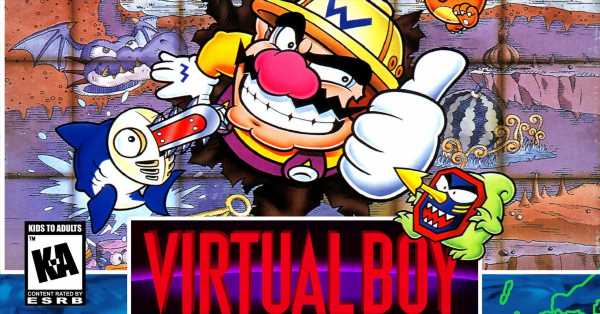 The unimaginatively titled Virtual Boy Wario Land could be considered Wario’s first true standalone game. Wario Land released first for the Game Boy in 1994, but it featured the subtitle “Super Mario Land 3” to not scare off anyone unsure about controlling Super Mario Land 2’s antagonist. There are no such qualifiers for Virtual Boy Wario Land, which released about two years later. It was co-directed by Wario’s creator, Hiroji Kiyotake (who also claims credit for the design of Samus), and it doesn’t feature Mario in the title or the game itself. Virtual Boy Wario Land claims the title of being the best exclusive on Nintendo’s worst-selling standalone console. No Wario game is more underplayed, and that’s a shame, because it’s a worthy addition to the Wario platfomer canon, even if it lives on a platform nobody wants.

Virtual Boy Wario Land takes advantage of the Virtual Boy platform, which eluded me most of my life. I remember standing on my tiptoes in a Sears department store, straining to hold my head against the headset to catch a glimpse of the future with Mario Tennis, all while trying to figure out why I needed two D-pads – a question that eludes me to this day.

Useless dual D-pads are the least of the system’s problems. You play by staring into a headset that must be placed on a table, which hurts your back. Eye strain from playing is such a concern that the default settings of every game force you to take a break every 20 minutes. Sales were so poor that Nintendo abandoned the system within months of its release. Fewer than a million Virtual Boys were sold. For context, Nintendo’s second worst-selling console is the Wii U, which sold about 13 million units.

Knowing all this, I have still always wanted to play one. The Virtual Boy is my biggest Nintendo blind spot, which is ironic considering it is the Nintendo console most likely to make me go blind. I’ve occasionally checked eBay over the years to see how much the system costs; in 2021, my wife took notice on our shared eBay account and inexplicably bought me one before I could explain why I wanted it, which was good because I never could have come up with a worthwhile argument. The used system came with Mario Tennis, and I separately purchased Virtual Boy Wario Land. While nothing could have saved the Virtual Boy, after subjecting myself to about three hours of Virtual Boy gameplay to complete Virtual Boy Wario Land, I believe that had the game been available at launch, the legacy conversation surrounding the console could have been slightly more positive.

Virtual Boy Wario Land opens with Wario in a forest with layers of trees behind him telescoping into the distance. The 3D effect, present more than 15 years before the Nintendo 3DS would experiment with the technology, is on full display. Even Wario himself is displayed in stereoscopic layers, his hands seemingly floating closer to you as they lay by his sides. After a short scene with inexplicable gophers and treasure, Wario falls deep underground, which is a smart setup by the developers to make the bizarre Virtual Boy color scheme work: With the conceit that the entire adventure takes place in a series of underground caves, the red and black visuals feel right. You play the game by staring into a claustrophobic, darkened headset as if you’re peering into a cave, so to see Wario and his surroundings painted in deep black with red lines almost feels accurate, as if Wario is wearing night-vision goggles.

From there, it’s a proper Wario Land game, and I love it for that. Playing it felt like discovering an unfamiliar album from a beloved band, or watching an old film I didn’t know was made by my favorite director. I felt nostalgia for it despite playing it for the first time. You collect familiar power-ups, like a dragon hat that breathes fire, or a pair of horns that makes you more powerful. You pick up bad guys and throw them. You carry keys through the level to unlock the exit door. You suddenly find yourself wondering, “Maybe money is the solution to life’s problems and I should pursue it at all costs, even if it means getting hurt and shrinking down to a balding, shorter version of myself.” The platforming feels great, and the game features all the mechanics I love about the Wario Land series that make it stand apart from Mario. You make the climb up the cave system with each level, collecting expensive artifacts while enjoying fun little touches like a gopher who is sometimes hanging out watching TV during the between-level scenes.

Despite enduring the uncomfortable process of playing, the Virtual Boy really does elevate Virtual Boy Wario Land as a platformer. In an early-game example, gigantic swinging spike-balls move between the foreground and background. They’re easy to avoid, but it’s an impressive technical showcase of the Virtual Boy’s stereoscopic tech. That awe maintains for the full game. Wario jumps between the foreground and background, which is a satisfying motion to execute, and enemies are able to attack from all angles.

The bosses take full advantage of the 3D tech by throwing attacks at you from the background, and it all culminates in an unexpectedly terrifying final boss that reminded me of The Legend of Zelda: Ocarina of Time’s most horrifying boss with the least horrifying name: Bongo Bongo. Wario’s final opponent is a gigantic demonic floating face with disembodied hands, and you must leap onto his nose to defeat him. When he smashes the ground below Wario, it sends Wario careening into the background, where he lands on a bouncy platform that sends him right back into the foreground. It’s the kind of boss we would all collectively acknowledge as a memorable moment that scarred our collective childhoods, if any of us had actually played it.

Virtual Boy Wario Land is easily the Mario-antagonist-turned-standalone-protagonist’s most underplayed game. It’s the proper sequel to Wario Land many of us were never able to experience, and that’s too bad. It’s a shame Nintendo never ported it to Nintendo 3DS where it may have flourished as an impressive artifact and could be played as intended thanks to the handheld’s stereoscopic capabilities. It also would have been playable without backache, eye strain, and a headache, all symptoms I experienced thanks to my handful of play sessions.