It’s truly bizarre how a little distance and a change of perspective can flip your opinion on something. Last month, I took a look at an early version of Vigil: The Longest Night and walked away unimpressed. Borrowing inspiration from FromSoftware’s Dark Souls series, the game seemed little more than a blatant attempt to recreate what Miyazaki and his team built with the Souls titles. It even copied UI elements and the basic core gameplay loop.

Having now finished a single playthrough, I wouldn’t claim that Vigil is an unsung masterpiece, but it’s definitely more than just indie Dark Souls. There are still a lot of things that could be improved, but those looking to get a slightly different taste of stamina-based, nail-biting combat could do worse than checking out Vigil: The Longest Night. 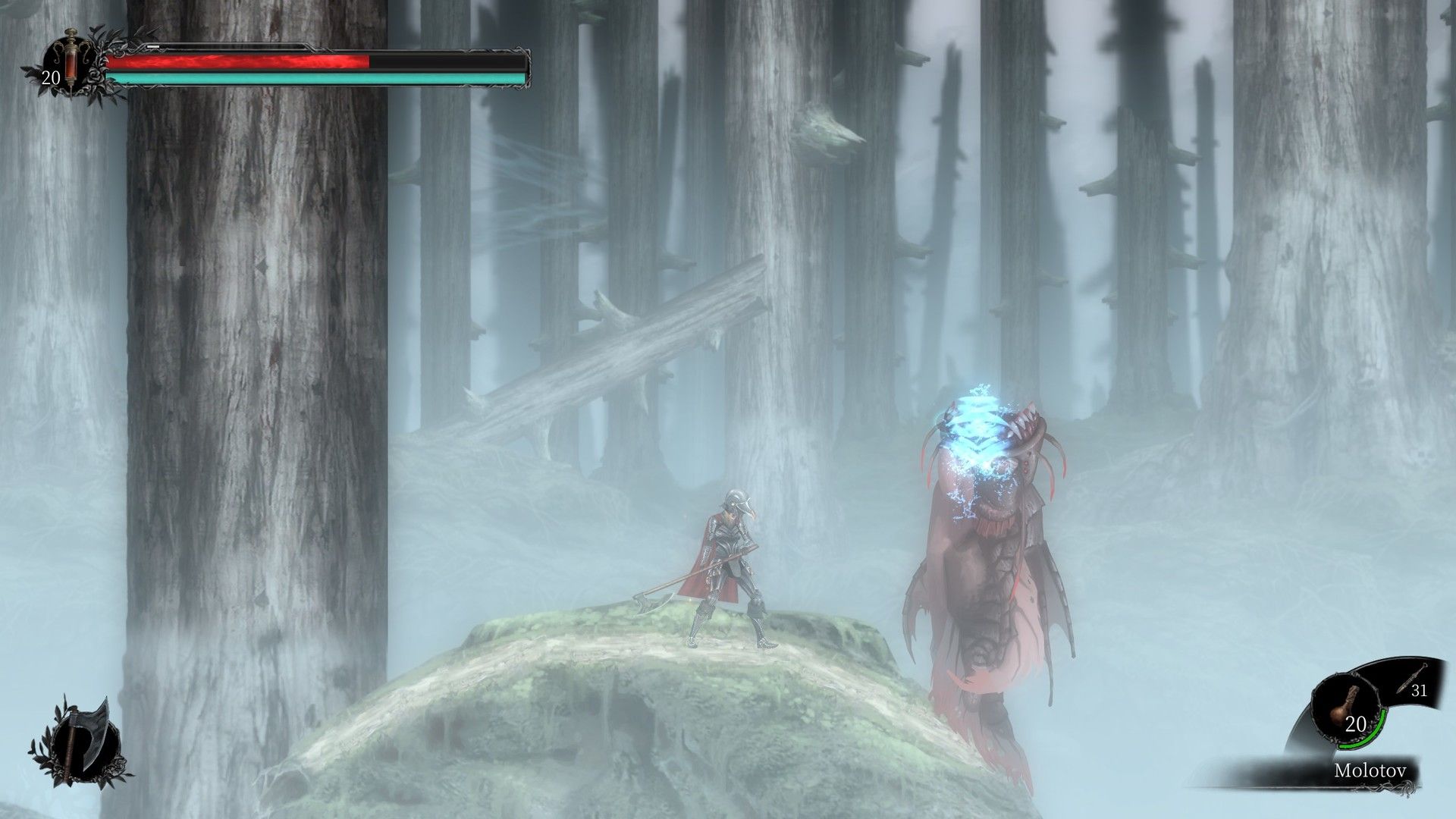 For the sake of clarity, I will admit upfront that I completely skipped all of the dialogue and story in Vigil. The game presents information in a manner similar to the Castlevania series: you’ll run into characters and be greeted with text boxes that you scroll through. From there, you’ll learn more about the situation in this strange world and how some plague is seemingly corrupting everyone in the neighboring villages. There’s more than meets the eye, obviously, but the basic setup doesn’t break new ground.

Much like the Souls games, Vigil doesn’t make its plotline integral to the experience. You might end up becoming lost at certain points if you follow my lead, but the game is perfectly beatable ignoring any and everything relating to the story. Try as I might, my impressions from the preview really didn’t change once I worked through the main game. I, personally, didn’t gel with the narrative.

The gameplay, at least, is a bit touched up from the earlier build I played. There are still elements that I believe aren’t properly explained (such as mid-level save crystals), but Vigil features a combat system that has shades of Dark Souls, Castlevania, Metroid, and other various action platformers. Again, it’s not exactly original, but a decent skill tree, customizable weapons, and a solid sense of exploration work towards getting you invested in searching every nook and cranny.

What helps is that the animations aren’t as janky as before. Vigil isn’t quite what I’d call polished, but your attacks land with satisfying sound effects and there are enough enemy tells to make dodging/parrying attacks feel gratifying. Usually, when you die, it will be a result of you scrambling instead of the game working against you. I say usually because I’m still not a fan of general movement.

For a 2D action title, relegating movement to a joystick just plain feels bad. At times, you’ll start crouching and not really know why. The same happens with pressing up on the joystick, which is how you both interact with objects and enter doors. If an object happens to land too close to an exit, you’ll often get stuck in a text box instead of walking out of the door. In less combat-intensive moments, this isn’t the end of the world, but I can’t tell you how many times I would crouch when meaning to run away. That’s on top of the lack of camera control where missing a jump and falling might kill you. It can be aggravating.

A lot of this will sound familiar if you read my preview, but the later level designs and themes are just markedly improved from the intro. Vigil is a game that makes a pretty lousy first impression as it doesn’t reveal its hand in the opening act. You’re kind of just going through the motions and traveling through a fantasy setting that feels a bit generic. It’s when you get about one-third of the way in that the game opens up.

Due to how open-ended the plot structure is, Vigil gives players numerous options for different endings and progression. You don’t need to tackle things in a set order, not to mention you can prematurely make the game more difficult if you make certain choices. Having only faced two bosses, I jumped through a dimensional portal and fought a fairly difficult boss that then “reset” the world I was in before. Now, I had to deal with tougher enemies and revisit past landmarks with different layouts. It did a lot to get me rethinking what I initially felt.

Sadly, the boss fights are just not something I feel are truly strong. This actually has a lot to do with the skill tree in Vigil, which allows you to unlock a second chance ability. The confusing menu system for upgrading doesn’t make it initially clear, but one of the skills in the fifth upgrade tree allows you to suffer mortal damage and continue battling. With this, you can power through certain boss attacks safe in the knowledge that you won’t die. It’s not a catch-all, but it works in enough instances to remove a lot of the threat from these encounters. 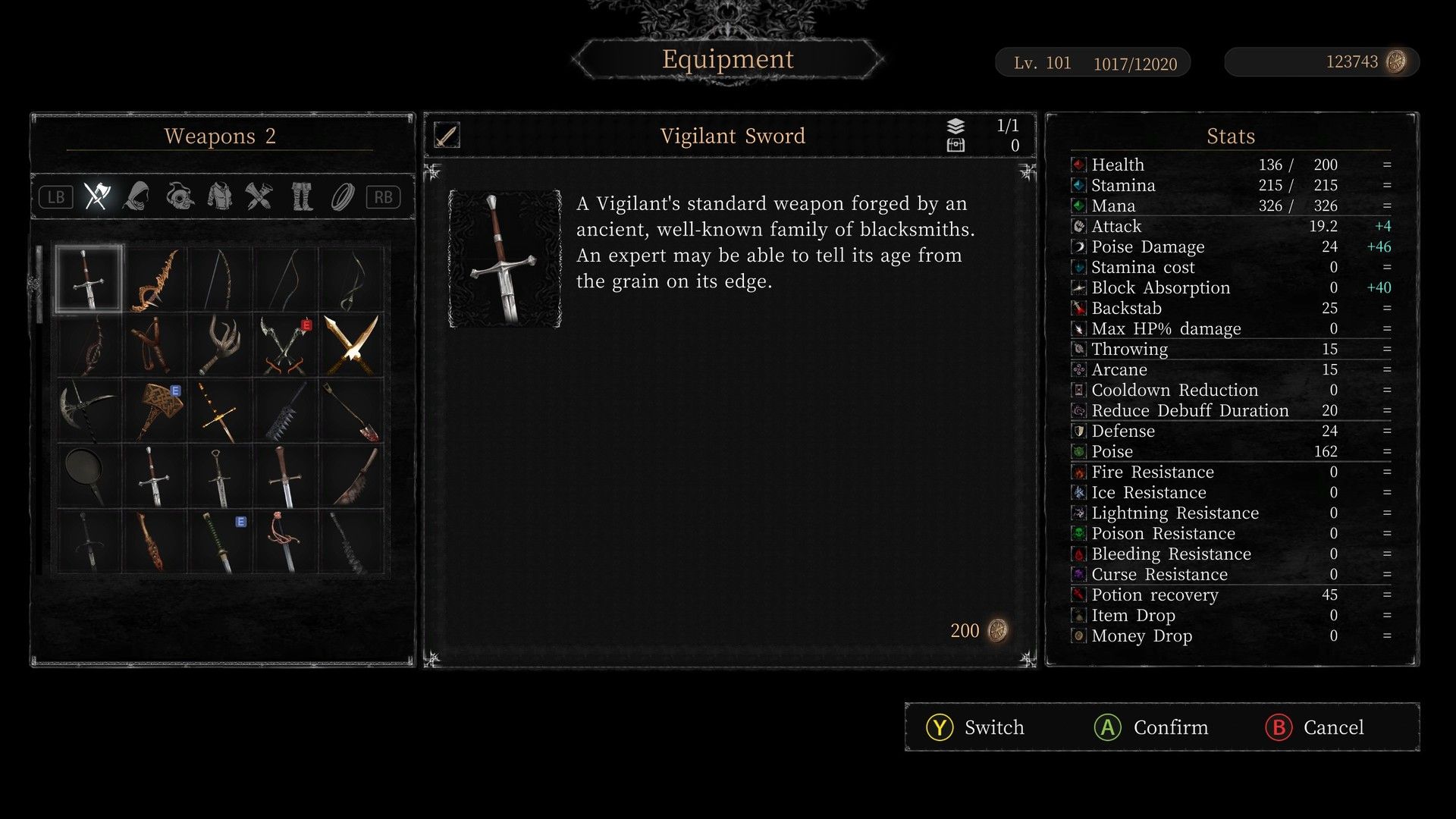 Worth A Second Look

It also doesn’t help that the difficulty balancing is out of whack. On Hard, Vigil feels like a successor to Dark Souls. It’s not as punishing, but a few bosses do capture that initial feeling of being insurmountable. On Normal and lower, the game is almost mindless in how simple it can be. You’ll still be tacking tons of damage, but there is virtually no need to keep track of your health if you’re focusing on the correct upgrades. There doesn’t seem to be a solid middle ground.

I may sound harsh, but giving Vigil: The Longest Night a second chance at least showed me I may have been mistaken. On a personal level, I’m still not truly gripped by everything here, but there are a lot of risky design choices and themes in Vigil. Developer Glass Heart Games should be commended for paying homage to the Dark Souls series while taking it in a slightly different direction.

The gamble doesn’t quite pay off for me, but it just might end up being your next indie favorite.

READ NEXT: Sekiro Is Getting A Surprise Update That Adds A Boss Rush Mode And New Costumes 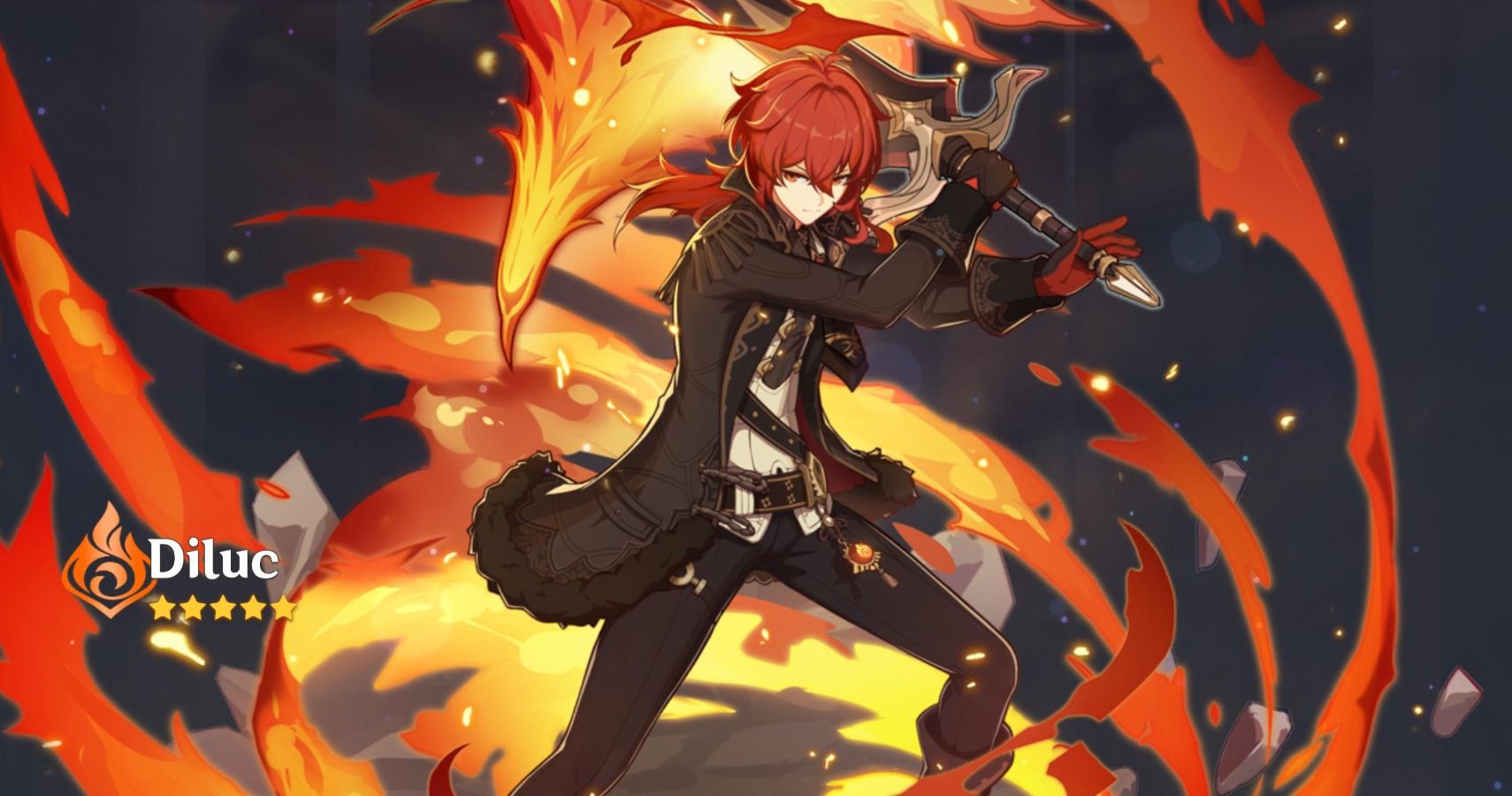 Fan Finds Tyler, the Creator's Character on 'GTA V'
We and our partners use cookies on this site to improve our service, perform analytics, personalize advertising, measure advertising performance, and remember website preferences.Ok