Valve’s next-generation virtual reality unit, known as Index, is an impressive plaything with a fistful of design advances beyond the old Vive. It’s also expensive, and lacking — for now — any particular reason for purchase in the way of compelling new games.

Last week, at Valve’s offices in Seattle, I got a chance to play with Index (which is expected to ship sometime in June). I liked it a lot. It’s stylish and smart, and it solves a bunch of early VR-related problems. But before we get into the specifics of the hardware, let’s get one thing out of the way. Let’s talk about games.

Valve is known to be working on three big VR games, which we all assume will include one or more Big Valve Franchises. As of right now, Valve refuses to speak of these games. Not even in an elliptical “what if …” speaking-strictly-off-the-record kind of way. (I know, because I tried.)

So if you’re hoping for news about a VR Half-Life, Portal, Team Fortress, Left 4 Dead, or Dota, you’re out of luck. All that the well-rehearsed Valve spokespeople will say is that a big VR franchise is coming this year. Which means almost exactly nothing.

But if we’re still in the dark about software, the hardware picture is encouraging, starting with the controllers. One of Index’s main attractions is a new input system called Knuckles. These are a pair of controllers that attach to the hand (not the wrist) via an adjustable strap. 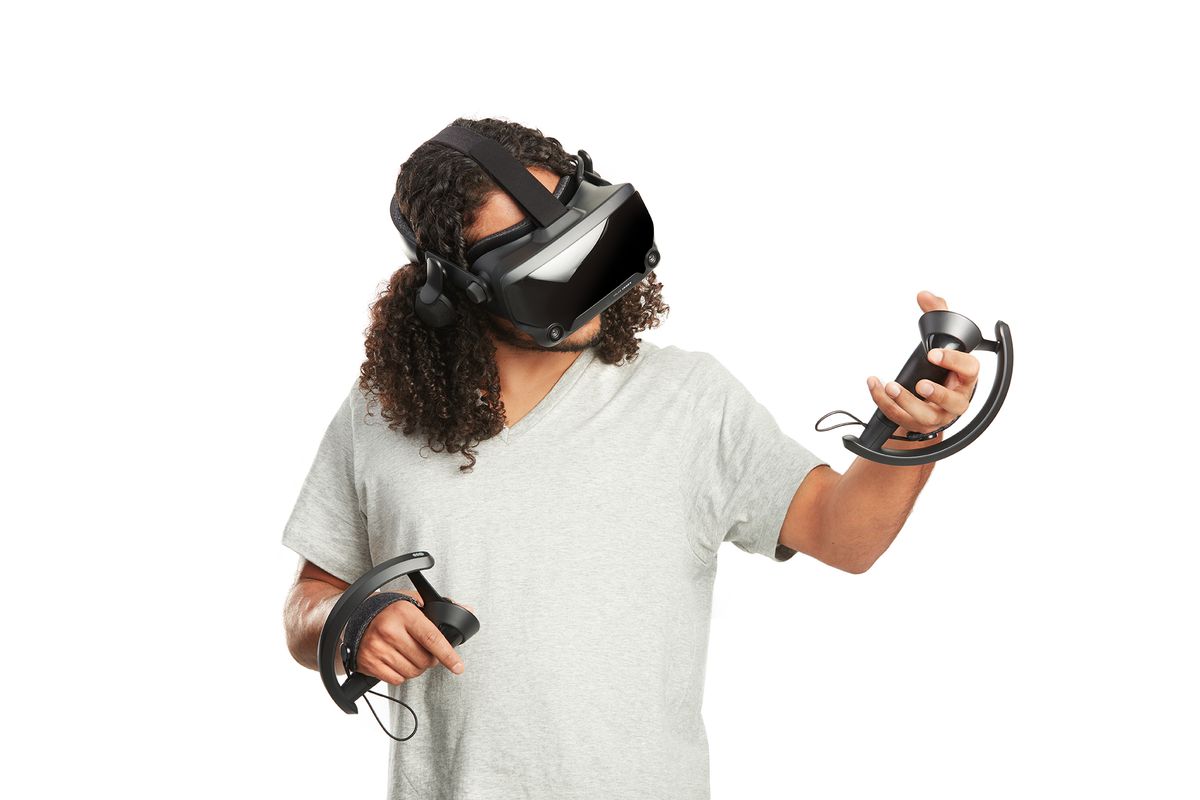 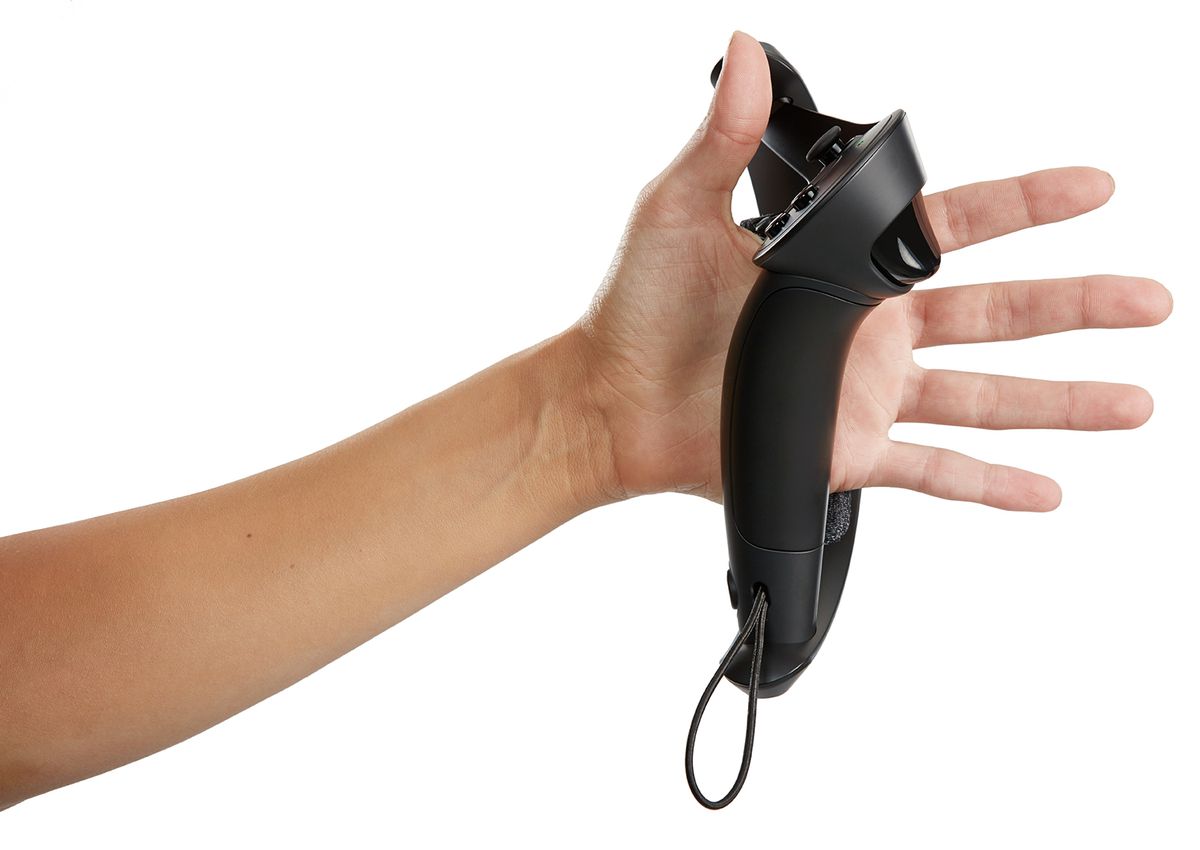 A Knuckles controller for Index.
Valve

Once I attach my Knuckles, they feel more like a pair of gloves that hang from my wrist than a handheld controller. If I shake my hands in the air, or try to raise the roof, the Knuckles stay resolutely attached to me. They feel great.

My first demo at Valve teaches me about how Knuckles simulates individual finger inputs. It’s a Portal-like series of tests in which I variously shake hands with a robot, high-five, make the peace sign, point, waggle my digits, and shake my pinkie.

It takes me a few moments to figure out the inputs, but it’s soon apparent that I’m able to make use of my VR hands pretty much the same way as I use my real hands. There’s a slight lag in movement and input, but this is a way more intuitive system than I’ve ever played in VR before.

Index’s Knuckles controllers make use of 87 sensors, each, so that the complexities of hand movement are translated into the virtual world. It’s an impressive piece of user interface design that feels akin to magic. 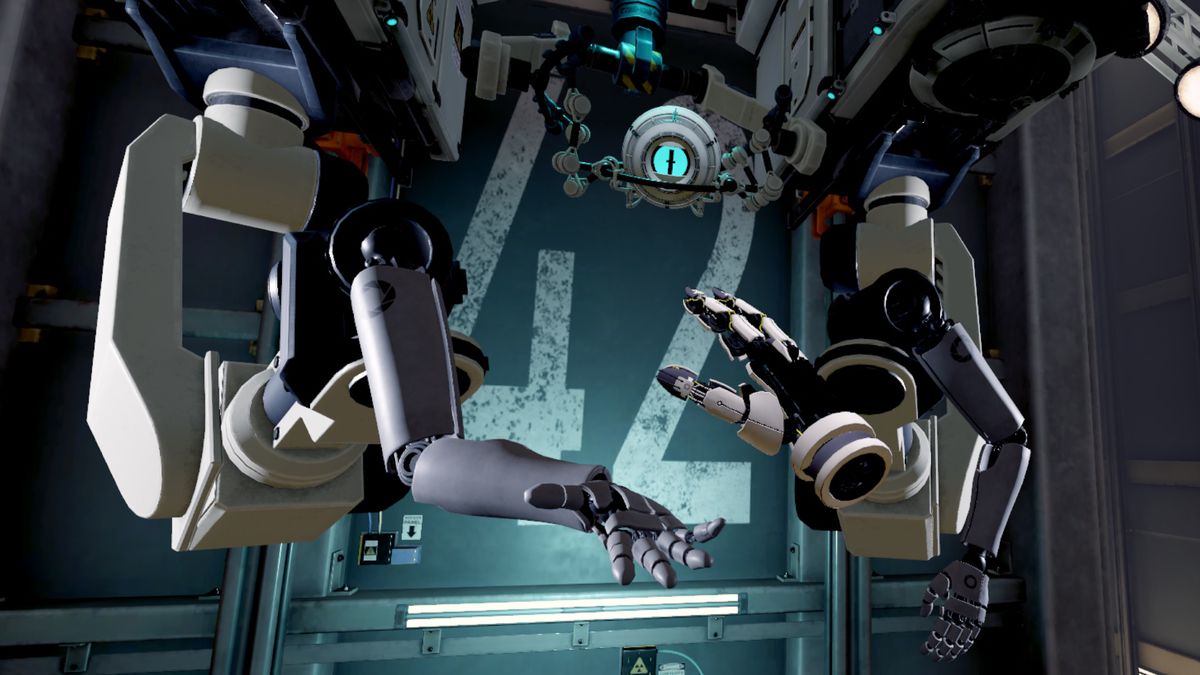 A Portal-themed demo for Index.
Valve

Inside a Portal-themed demo, I’m impressed by Index’s visual fidelity. The world looks sharper than I’m accustomed to seeing in older VR units. In particular, text is crisp and clear, certainly when in the center of my vision, though it blurs at the periphery. Index’s screen resolution is 1440×1600 per eye, up from Vive’s 1080×1200 per eye. But I’m told by Index’s designers that this is only part of the picture.

Their task is to marry the display with optics and tracking. If one gets too far ahead of the others, its advantages are moot. For example, great optics will still be blurred by poor visual persistence: Sharp visuals must be designed to account for quick head movement. Fidelity is not a matter of raw power, but of careful balance.

According to Valve, the new headset offers a “typical user experience” field of view that’s 20 degrees larger than Vive. This is aided by a custom dual-element system in which the user can move the lenses themselves.

For me, this means moving the lens right up to my spectacles. The effect is that I feel way more comfortable playing with my glasses on than I’ve ever felt with previous VR units. It’s a much more intuitive, rewarding design than the Vive’s setup of sliding the entire headset forward and backward. Plus, there’s no outside-the-headset light leakage to impede my virtual world.

Index’s standard frame rate is 120 Hz, up from the Vive’s 90 Hz. Index also offers an experimental 144 Hz mode, which I tried while playing a demo of No Man’s Sky. I’d played this on Vive a few weeks before, during an invigorating demo at GDC. Although it’s difficult to make comparisons based entirely on memory, I feel that Index offered a significantly sharper experience. Even after throwing a spaceship around for 15 minutes, I felt none of the queasiness that I’ve come to expect from even the slickest VR games. And I saw far less blur than I’ve seen before. 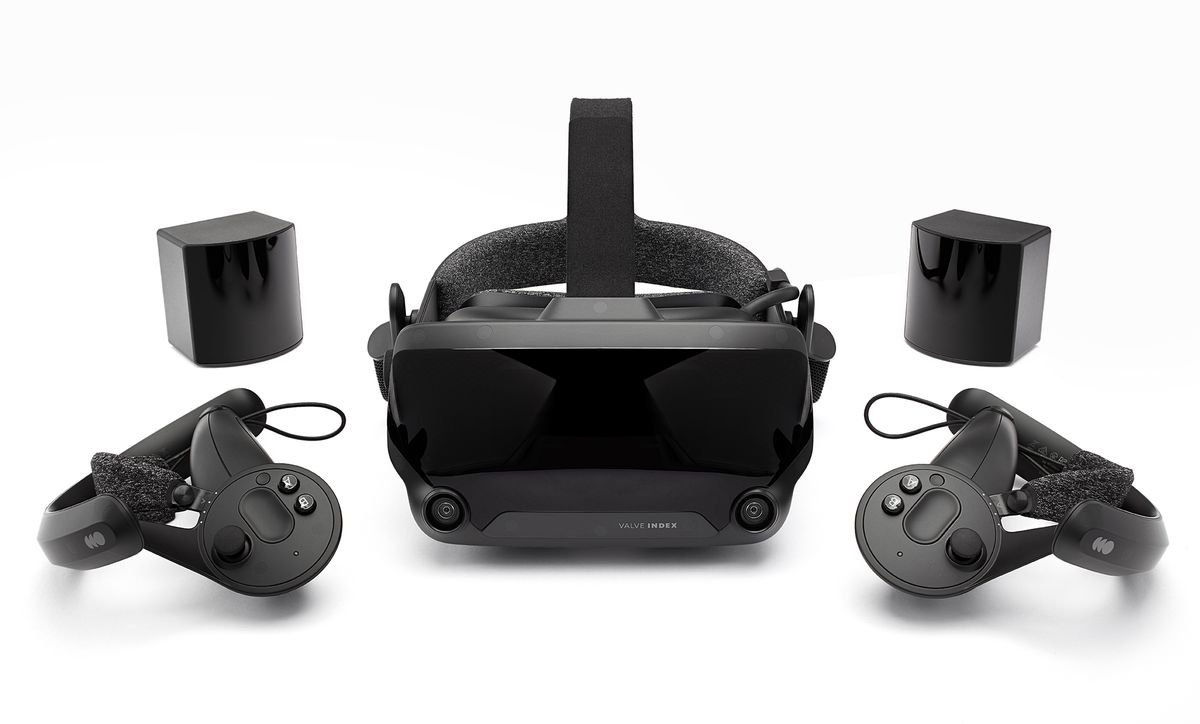 Index, with all the trimmings: two Knuckles controller and two Base Stations 2.0.
Valve

Index makes use of Base Stations 2.0 for field tracking. Valve says that these are “longer-range” and with a wider field of vision than the originals. My various demos (in the idealized setting of Valve HQ) offered no problems whatsoever. But still, it’s a departure from rival Oculus’ use of headset sensors for the Rift S, which free the user from cables.

When I asked Valve about this stark diversion in design, I was told that the company does not believe that head-mounted displays with built-in sensors are “there yet.”

Index also allows for hardware modifications. A front-mounted space on the headset’s brow, just behind the visor, would allow designers to come up with who-knows-what kind of peripherals, which plays into Valve’s ideals of an open-sourced world. It will be fascinating to see how this plays out as developers get their hands on the unit. Valve is calling this slot the “frunk.”

Index is designed, in all its particulars, to be backward-compatible with Vive. If you want to use “classic” controls with Knuckles, you can. If you want to play first-generation VR games with Index, that’s fine.

You can also purchase just the bits you need. Although the whole kit and caboodle comes in at $999, the headset alone is $599. The head-mounted display plus the Knuckles controllers cost $749. The Knuckles alone are $279. Valve is taking pre-orders starting May 1, with a launch slated for mid-June.

During Valve’s demonstration, a spokesperson said that Index is the sort of thing that is likely to appeal to a virtual reality enthusiast who (a) must have the latest thing and (b) enjoys sufficient disposable income to satisfy that desire. It’s an interesting contrast with Facebook’s strategy for Rift, which is pushing hard for the price tipping point when VR suddenly becomes a mass-market thing, like smartphones did a decade ago.

The fact is that Index requires a powerful PC. It’s expensive. Its software base is currently unknown. If you’re in the market for a top-end VR deck and you’re willing to pay upward of a thousand dollars, Index looks like a good option. But for most people, this may feel like a technological marvel, rather than a fully fledged member of consumer electronics’ mainstream elite.