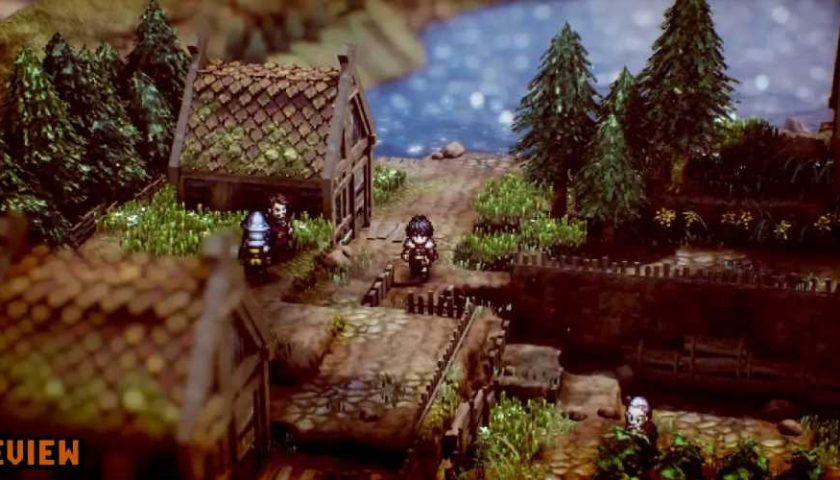 Triangle Strategy made me feel like a terrible person. JRPGs are normally defined by anime melodrama and silly haircuts, but this TRPG somehow brings out the human side of fantasy as we are forced to make decisions that have a tangible impact on the world around us. Ruling a kingdom is no easy task, especially when you find yourself embroiled in a war where everyone around you is a potential saboteur ready and willing to embrace betrayal.

While the characters are little more than a mess of adorable pixels and many environments deliberately resemble handcrafted dioramas, there’s an element of realism in how this game expresses loss and sacrifice amidst conflict, often placing harsh decisions on our shoulders and expecting us to reach an ultimatum that will never satisfy everyone. You will make mistakes as a ruler, forced to leave loved ones or citizens to die in the face of progress or knowing that the war ahead will see further blood spilt if we aren’t prepared.

Taking clear inspiration from the likes of Tactics Ogre and Final Fantasy Tactics, Triangle Strategy is an achingly faithful homage to classic genre conventions that can often feel too retro for its own good. However, this faithfulness is complemented by myriad innovation and creative mechanics that help it shine. Combine that with excellent characters and an unexpectedly poignant narrative and you’ve got one of 2022’s biggest surprises. After being somewhat underwhelmed by Octopath Traveller, the team behind it has returned with a tighter, punchier, and more refined experience that cuts away so much of the needless chaff. 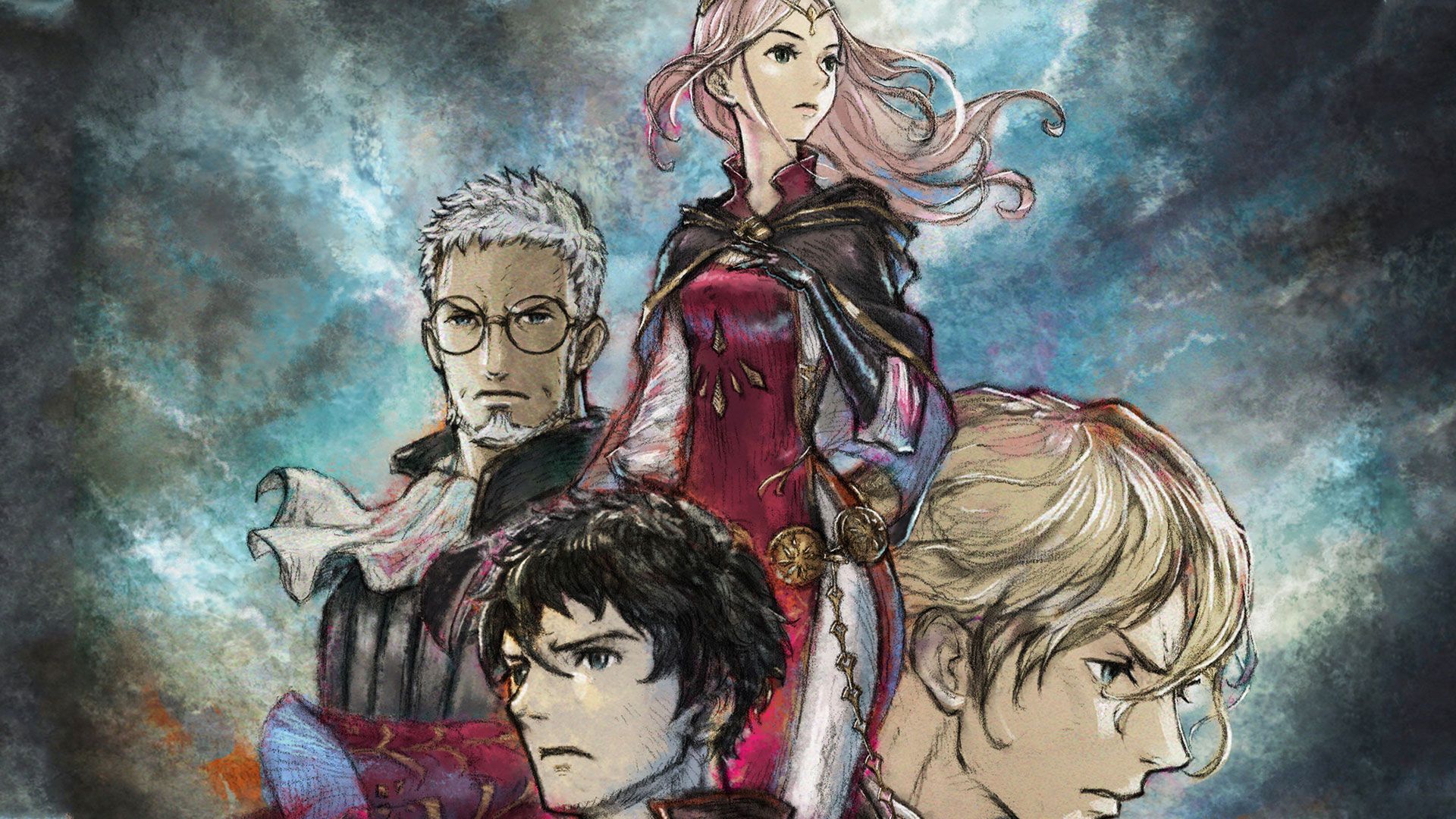 You play as Serenoa Wollfort, a young lord who is forced into the leadership of his house after his father falls ill. The opening hours depict the Kingdom of Norzelia as one of peace, with all three nations entering a period of tranquillity that is slowly but surely being bolstered with trade agreements and communal excavation efforts that will benefit everyone. Serenoa hails from Glenbrook, a region defined by its honour and co-operation, caught in between a duo of superpowers with more influence than it could ever imagine. The snowy plains of Aesfrost awaits in the North, its icy climate reflective of the harsh political machinations that underpin its nefarious monarchy. They are basically anime tories.

The Holy State of Hyzante resides in the east, a desert utopia renowned for its generous reserves of salt that provide it with ample leverage over neighbouring territories. Norzelia is filled with salt and iron, two precious resources that act as economic foundations for so much of its commerce and the livelihood of millions. When a mining venture uncovers a precious secret, Aesfrost overthrows its allies and thrusts the entire continent into a state of war. Kings are murdered, allies are betrayed, and Serenoa finds himself in a position of insecurity where he must do everything he can to survive. 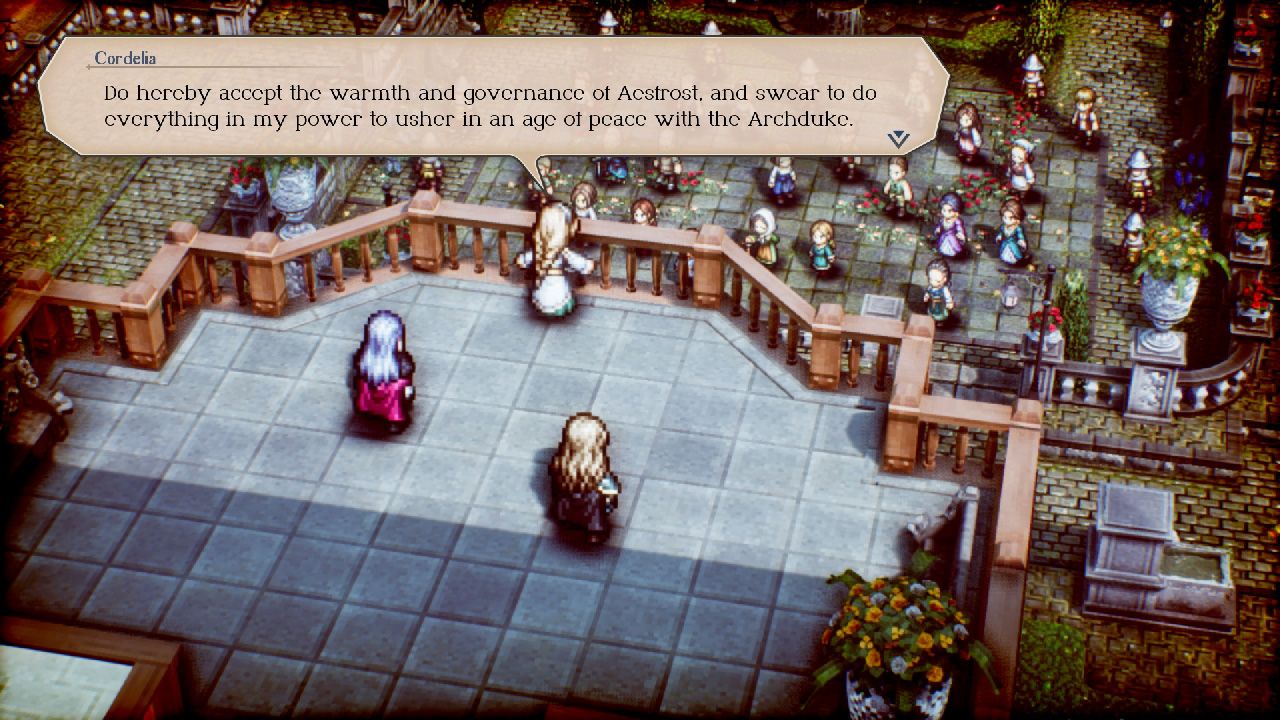 Luckily our hero isn’t alone, accompanied by his betrothed Frederica Aesfrost and Roland Glenbrook. The former is his betrothed and sibling to the rulers of Aesfrost, making her subject to racial distrust and sudden vitriol thanks to her fluorescent hair and willingness to side with the enemy. Roland is the prince of Glenbrook, and following his father’s death must hatch a plan to save his family and take back everything that was lost.

Triangle Strategy is filled with compelling characters all boasting worthwhile stories to tell, many of which are woven into the main narrative with surprisingly delicacy. I cared about all of them, worried that death would greet them early or my own hasty decisions might put them in danger. Player choice sits at the forefront of Triangle Strategy, with the majority of larger battles being preceded by a visit to the Scales of Conviction. Instead of conferring with a larger government body or his citizens, Serenoa gives a few coins to his mates and they throw them into a set of scales before deciding how to approach war. 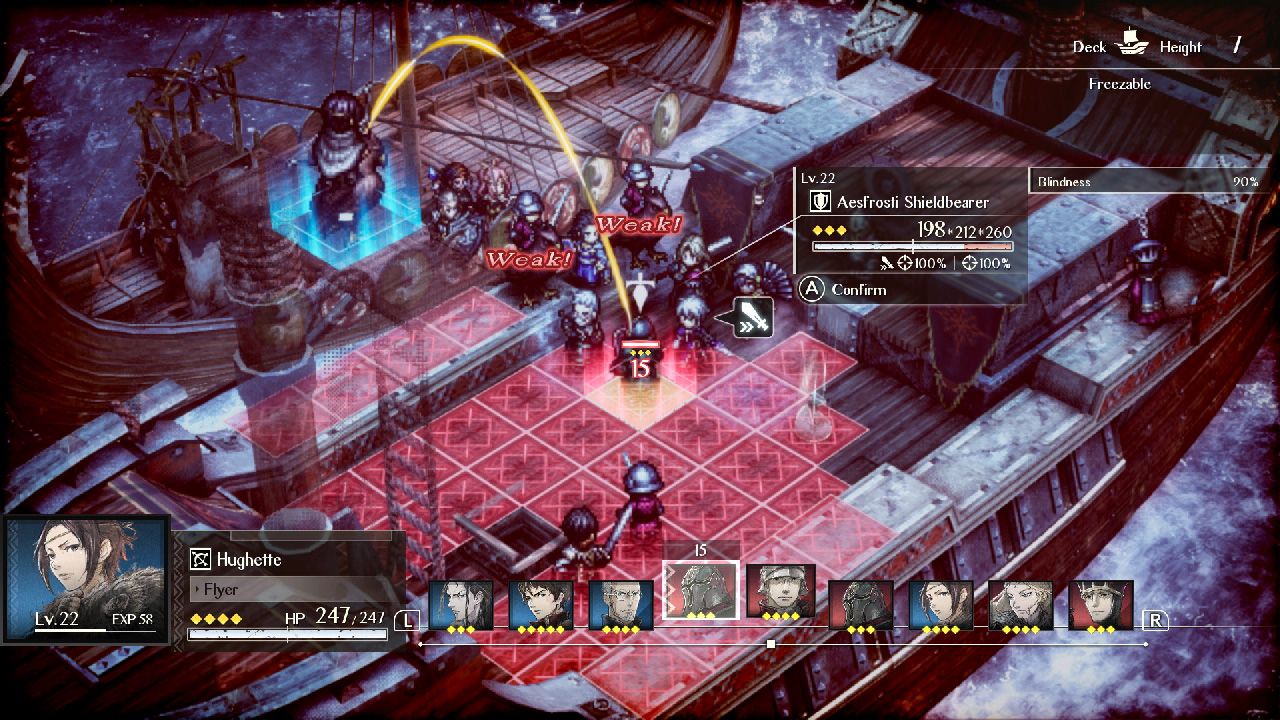 It doesn’t make much sense, but from a gameplay perspective it presents an enthralling moral conundrum that had me scratching my head on several occasions. Before making your stance clear there will always be a chance to talk with allies, engaging in dialogue and presenting evidence to sway their position on certain matters. Some will be steadfast in where they stand, while others might be open to persuasion with the right approach. Serenoa will often be free to walk into town and speak with NPCs, all of whom have a perspective to offer on current affairs and small hints towards what the right path might be.

Ultimately there is no right decision, and Triangle Strategy accommodates each narrative branch with a level of flexibility I never would have expected from the genre. One early decision has your party deciding to make a trip to Aesfrost or Hyzante for political purposes. I chose the latter, which led to me encountering unique characters and information that would have a huge impact on the events to come. If I had chosen otherwise things would have unfolded so differently, perhaps unveiling the evil plot and the motivations behind our central villains far sooner. Frederica also would have encountered her siblings, a dramatic encounter I decided to avoid because I didn’t want her feelings to suffer, knowing how delicate the situation had already become. 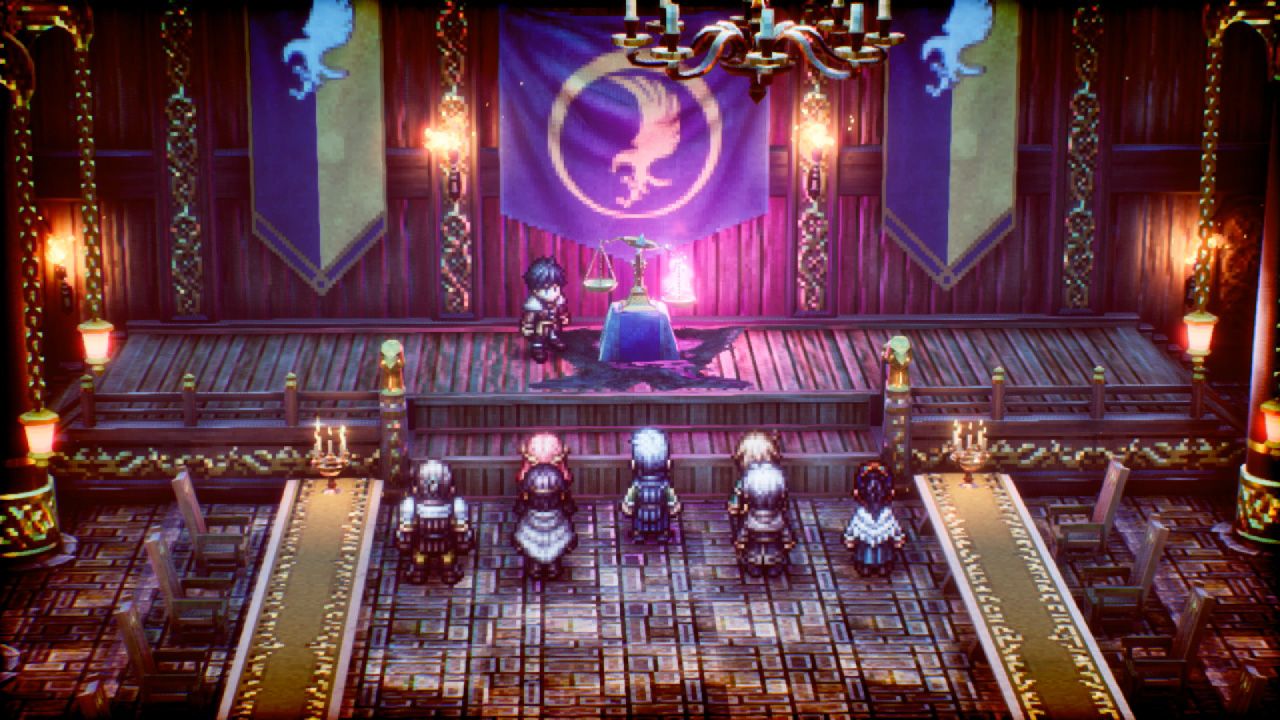 Triangle Strategy veers in unexpected directions like this all the time, likely encouraging repeat playthroughs or a naughty bit of save scumming in case a pivotal decision turns sour. I stuck to my guns even when it was clear I should have acted differently, making me curious to revisit certain moments and seek out alternate endings where those I love might have lived, or sacrifices to my people might have been avoided if I was more cautious. One battle involves setting braziers alight to keep enemies at bay, but as a result countless houses are burned to the ground. These belong to real people, and they will reside by the wreckage in later sections talking about what they’ve lost while bitterly accepting that it was for the greater good. Nice one, Serenoa.

This political melodrama is all well and good, but if the game played like garbage none of it would matter. Fortunately, Triangle Strategy is a tactical darling. While the camera is a smidge fickle and there aren't nearly enough opportunities for grinding unless you’re willing to replay the same optional missions over and over again, the core tenets of combat are immaculate. I grew up with Final Fantasy Tactics and Advance Wars, so this feels like a robust expansion of what those games accomplished while making the genre more approachable than I’ve ever seen before. It’s still a tough bastard, and making even a single rash move on normal difficulty will see units utterly decimated. But a handful of new ideas mean conclusions like this are much less common if you’re careful about things. 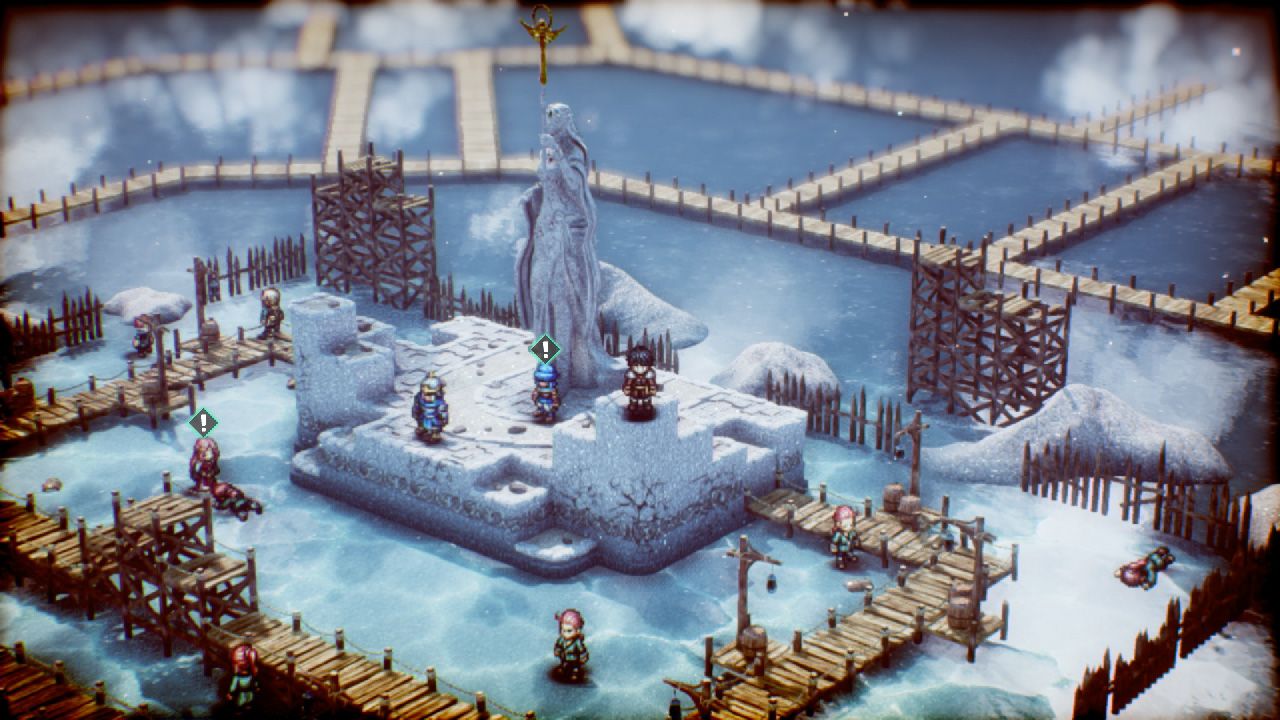 Coloured tiles appear whenever you are about to move a character, making it clear when you are within reach of an enemy attack and when you are safe. This makes positioning a breeze, guaranteeing safe passage in the midst of chaos when moving more sensitive units like mages and healers across the battlefield. Synergy is also emphasised. If an attack is performed with an ally sitting on the opposing side of a foe’s position, you will perform a two-pronged combo that essentially doubles your damage. These are small additions, but compile to create a tactical experience that feels infinitely more layered and satisfying. It is no longer about executing a single action and hoping it goes well, forced to restart if the opposing side suddenly decides to call in reinforcements or deal a critical hit.

Each major character also has a trait unique to them – such as being able to act twice in a single turn or build ladders to navigate trickier terrain. Everyone is different, which makes selecting which units are coming into each battle that much more difficult. You will need to mix and match in order to match each new situation, which can often result in lower level characters having to hang back until they are needed because, as I said before, grinding opportunities in Triangle Strategy feel oddly truncated for a JRPG of this scope. Outside of battle and between story sequences you are free to visit a War Tent filled with your allies ready to strike up conversations. This is also where merchants and traders are found, who are required to upgrade weapons and advance character classes on the regular. 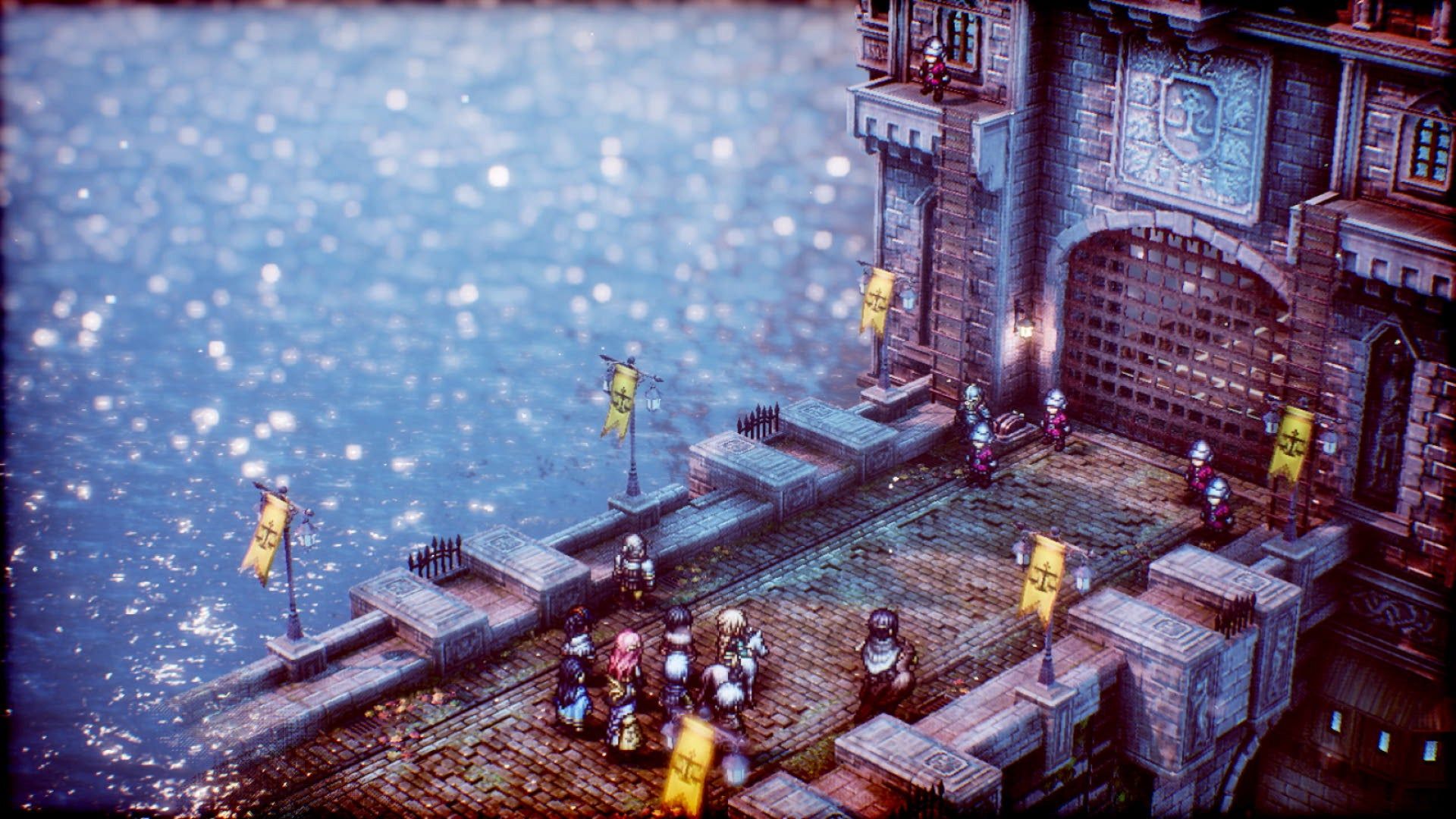 Everything is situated here, and once again I would have welcomed a bit of extra variety to spice things up. Triangle Strategy is rather traditional in its definition of fantasy, so those who aren’t pulled in by political showdowns and melodramatic expressions of bloodshed might not find a lot to love here. The voice acting doesn’t help either, some of which is downright awful thanks to a lack of direction that has some characters come across as emotionless husks that never give the writing they’re propping up justice. Serenoa is easily the worst, a rather damning indictment given he’s the main protagonist we hear from all the damn time.

Thankfully the narrative strength pulled me through despite some awkward performances, and away from the main campaign sits a number of Character Stories which are designed both to expand upon existing allies while pulling new ones into the fold. Never ignore these, because not only are they absolutely precious in their execution, but doing so would overlook characters each with distinct mechanics and designs that all shine equally. It’s also a dose of much-needed variety in an experience that sticks by conventions a little too much for my liking.

Triangle Strategy is an excellent game that expertly combines satisfying combat and a layered narrative to create something I didn’t know I needed. Serenoa Wollfort’s journey is punctuated with intrigue, betrayal, and triumph that are all driven by player decisions that actually feel like they matter. It isn’t smoke and mirrors on a moral railroad presenting the illusion of choice, it's a ride or die political rollercoaster where failing to convince a single ally will result in the untimely deaths of thousands.

JRPGs are often juvenile in some manner while trying to push forward a serious narrative, so it’s nice to see something that is mature in its outlook and expects us to come along for the adventure or leave it behind. I was on board from the opening moments and never looked back.

A review code was provided by Nintendo for the purposes of this review.