If you’re part of the ‘90s rave culture, you might have heard of the German techno band Scooter. The percussive thunks and swelling synths of their music, as well as the genre of hardcore techno, seems to be a direct influence on the, well, musical sensibilities of the Anodic Dance Crew in Disco Elysium. I’m referring to, of course, the four ravers you run into at a tent near the abandoned church in Martinaise: Andre, Noid, Egg Head, and Acele. But if Andre is the pragmatic leader of the four, then Egg Head, the smooth-headed speedfreak who liberally quotes Scooter frontman H.P. Baxxter with phrases like “I am the mic enforcer” and “The first page of the second chapter”, is the face of these speedfreaks. In one mission, you’ll even need to navigate through the chants of Egg Head’s “Hardcore to the mega!” and “HAAAAAAAAAAAAAAAAAAARDCORE” to unlock a proper conversation with him.

Hardcore, as a subgenre of techno and punk, is about taking the ethos of these genres and dialling them to their extreme. Both hardcore techno and punk are faster, louder, rougher, darker, and more explicitly anti-authoriatrian than the genres they take liberal influences from. They are all about impact, about statements, about noise. Conversely, Egg Head may yell a lot about hardcore, but unlike his buddy Noid, he doesn’t seem to have internalised the meaning and ethos of the hardcore sensibility. Instead, his politics and beliefs seemed to be buoyed by how loud he can shout his catchphrases, as you, playing as Harry, can subtly nudge him towards the moralist or fascist ideology without him possibly realising it.

But Noid is different. A fan of the hardcore aesthetic, music, and everything else in between, he’s utterly in allegience of the very essence of hardcore. To Noid, the hardcore is the music (“Noid servces no master but the beat,” said Acele), the hardcore is anti-establishment, and the hardcore is about subverting social norms; Noid even wears feminine clothes in a bid to “piss off the sex-system”, and wants to know more about Harry’s necktie, which he said is “fucking primal” because it’s so goddamn gaudy. 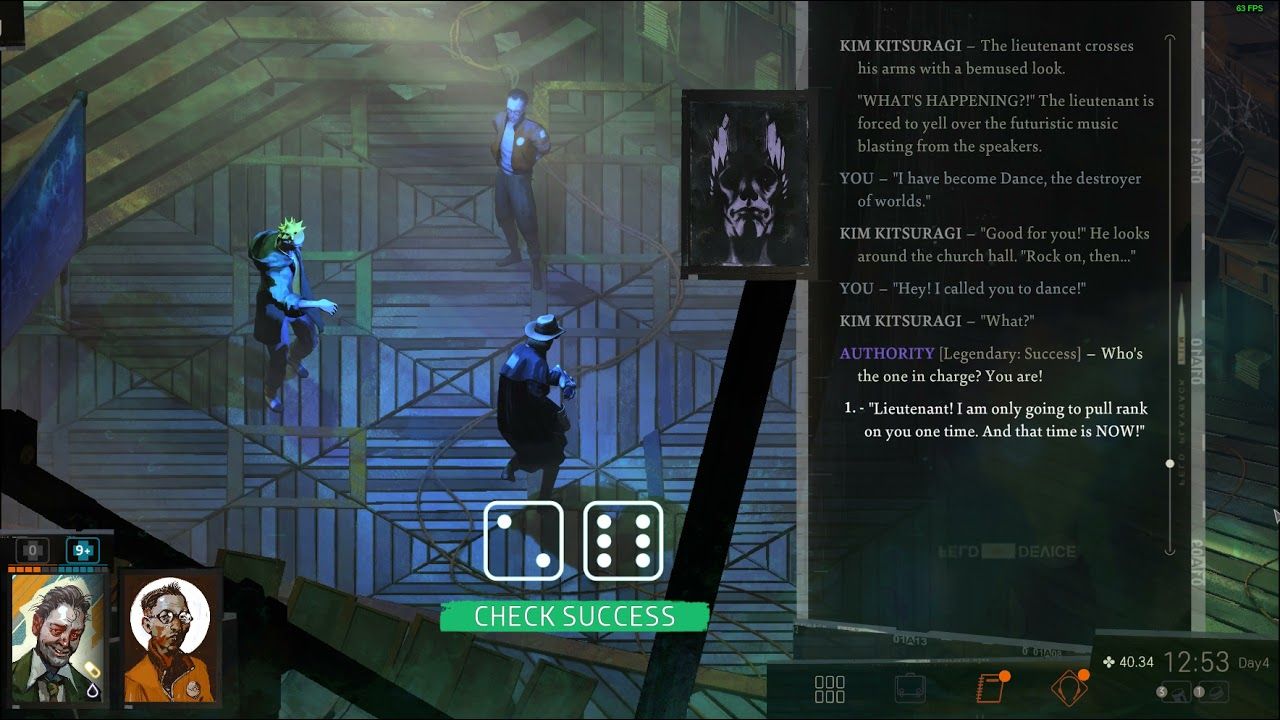 Disco Elysium, in the same way, is just as hardcore. It yearns and succeeds in being transgressive, but not in the way Egg Head is. Instead, it walks a different path altogether, as it upends the structure of an RPG to embark on a new narrative direction altogether. It’s a game where its politics are heady and its beliefs are explicit, and the Anodic Dance Crew fits like a glove here, its various members of its motley crew a scaled down model of the game’s expression of politics.

Where most games—RPGs, to be explicit—simply dance around the concept of morality and ideologies, Disco Elysium is a clear rejection of such an embedded structure, giving voice to the broad ideologies of moralism (centrism, in other words), communism, fascism, and even just blatant racism. That’s not to say that it abides by all of these ideologies. Its searing indictment of moralism, for instance, is unveiled in the Kingdom of Conscience thought cabinet: that moralists don’t actually have beliefs, and that incremental progress is so gradual, so glacial, that moralists will never see change beyond the status quo. It reduces facism to a primitive, base and self-serving emotion, stemming from unresolved anger, sheer misogyny and self-destruction. It does not care about mincing its words. In short, everything Disco Elysium does is in service of the hardcore.