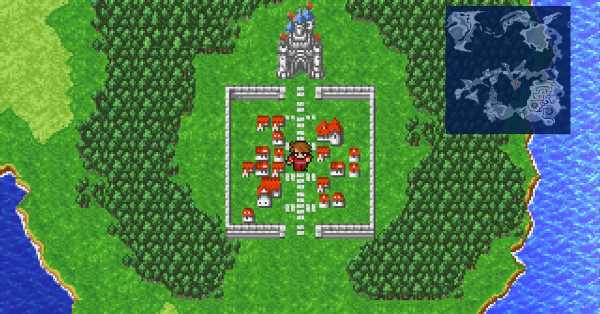 Final Fantasy started for me as a fantasy. In 1991, nobody I knew had the game on the NES, and there was no internet to speak of at my house. Instead of owning the video game, all I had was a Nintendo Power Final Fantasy strategy guide jammed with well over 100 pages of maps, tactics, and so-so Western paintings of heroes, monsters, and quests.

Over the years, I’d have a chance to not just play the original game, but enough remakes to shake a Warmech at. Everybody wants to visit an old classic now and then, but what happens when the new versions, while more accessible to modern gamers, lose something of the original’s vim and vigor? It’s an awfully fine line between fun and frustration.

Back then, I made a friend who had every video game system known to man and then some (he was the one guy with an Atari Jaguar on his Christmas list who would actually get one!). In the back of his vast game stash, he dug out Final Fantasy on the NES for me to borrow. The half mile walk back home never went so fast!

Booting the game up on my bedroom NES, hooked through a wobbly coaxial splitter into the tiny RCA mono TV, I was whisked away to a land of elves, pirates, and ogres. Every turn-based battle took a great deal of focus to beat. If I tried to dog-pile all my party members on one enemy that got killed in a jiffy, most of my attacks were wasted on my party members attacking an empty space where the enemy used to be. Instead, I had to make real tactical choices, estimating which party members did appropriate amounts of damage to make sure each of my moves counted.

Unlike Dragon Warrior, the first RPG I ever played, Final Fantasy required magic users to buy spells from a store. To make magic matters worse, you were stuck with a limited amount of spells you could cast unless you slept at an inn or in a portable house. Each spell felt like a valuable token to be used only in emergencies against hard enemies or bosses. At first, this pissed me off; I was more accustomed to gaining spells through gaining experience levels and using a pool of magic points to cast them with (not only did Dragon Warrior use this system, but the Final Fantasy series would adopt it starting with Final Fantasy IV). Once I got used to the limited spell casting per day, I rather enjoyed it. I couldn’t spam the spells as much because they were of such limited quantity. Much like Indiana Jones surveying the potential Holy Grails from which to drink, I had to “choose wisely.”

Around a decade later, I bought Final Fantasy Origins on the PS1. Released over two years after the launch of the PS2 in the US, Final Fantasy Origins featured remakes of the first 2 Famicom Final Fantasy games with sprites in the SNES style. While the real draw for most fans was the debut of an official English translation of Final Fantasy II in the US, I was more interested in replaying the remake of the original Final Fantasy. To the constant annoyance of my college roommate, I’d wake up early before class and sit on the dorm’s rickety stool to spend hours grinding away until the time-traveling edgelord Chaos was defeated.

Despite having fun, something was missing. Characters leveled up a bit too quickly. When I first played Final Fantasy on the NES, the ogres outside of Elfheim were a real challenge, knocking off party members in a single blow. In this Origins version, they fell to my blade with ease. Talk about ogre doing it!

After mucking about in the menus (the image gallery of Yoshitaka Amano concept art was fantastic to observe and see how close and/or far the pixelated versions hit or missed the mark), I jumped into the game proper.

A new prologue opens the tale. The world is in tatters. New sparkly water effects show off a raging sea, and the outside of the various dungeons look menacing. It’s not much, but it sets the stage better than dumping you right on the overworld like the original did.

After completing the initial quest to rescue Princess Sarah from the bastard knight Garland, something felt off. The auto-battle feature, while avoiding some tedium, makes the main part of the game trivial. As much as fans might not want to admit it, most of your time in these early Final Fantasy games is spent grinding your characters until they are buff bois who can battle the next boss.

While auto-battle is optional, it’s difficult to resist its large button staring you in the face, subtly beckoning you every fight with its fast-forward iconography. Making the battles automatic and super fast takes a lot of agency away from the player. I have fond memories as a kid of spending hours grinding away all the fantastical bestiary while either grooving to Uetmatsu’s epic soundtrack or having a favorite audio cassette playing in the background. I worry that the way the battles keep throwing the automated icon in your face overly encourages players to enjoy the game without the difficulty or the depth, missing out on some features that make the game so special, even if they aren’t so easy.

Weapons and items are cheap as well, unlike in the original where everything was expensive and buying a new piece of gear felt like you actually had to earn it. Limited uses of spells is offset by including the Ether item introduced in later games, which let players restore the number of times spells could be cast. A somewhat irksome change is being able to walk at turbo speed through villages and towns, when part of the game’s fun is stopping to smell the pixelated roses or listen to the inspired rearrangements of Nobuo Uematsu’s legendary tunes.

Final Fantasy I Pixel Remaster is an often frustrating experience. The modified sprites are tastefully done so they scale great on modern monitors, and its take on the classic score is amazing. I truly appreciate how it lets new gamers revisit a classic not just of the Final Fantasy series, but of the console RPG genre itself.

The inconsistent coat of paint Square Enix applied to the Final Fantasy games this time around (it does have better graphics and sound, but it doesn’t have the bonus dungeons from the GBA and earlier mobile ports) muddies the water. Depending on the age of the gamer, its first Final Fantasy might not have been the original version at all; thus, the Pixel Remasters don’t represent the version of Final Fantasy they grew up on. Modern gamers might find the picaresque plot of the original Final Fantasy boring and the random battles snooze-inducing, but that’s kind of the point of 8-bit retro JRPGs. Going back home to an old favorite doesn’t mean you have to take the shortcut to easy street.

As retro releases become more and more common with each console generation (like the Castlevania Collection or Rare Replay), I hope we don’t stray too far from the heart of the originals. Much of a video game’s features might seem outdated, but they’re part of the core experience of the game. It’s important to show respect to the original material, even if it can be a hard go at times. The thrills of victory dampen if they’re delivered to you on a silver platter. These Pixel Remasters are a lot of things, but being totally faithful isn’t one of them.