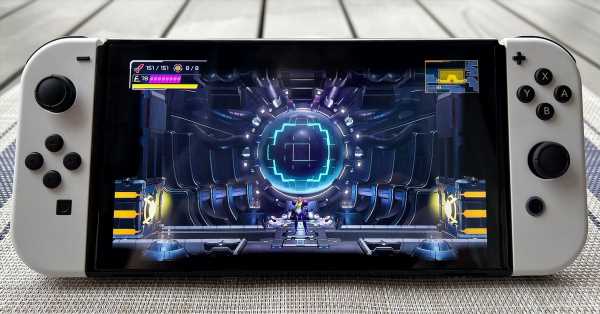 Even when the Nintendo Switch launched in 2017, it was a dinosaur. In terms of raw horsepower, it was far from cutting edge; the PlayStation 4 and Xbox One ran circles around it. But that was fine, because thanks to the Switch, we could play The Legend of Zelda: Breath of the Wild on the subway.

Soon, though, the luxury of playing a major console game on the go was no longer enough. Since then, there have been calls for an enhanced version of the Switch that could tackle more intensive games and deliver higher performance. Then the rumors started, reaching a frenzy earlier this year, following reports that Nintendo would soon announce a 4K-capable Switch model. Finally, Nintendo was going to update its ambitious hybrid console with some additional get-up-and-go.

Or not. In July, when Nintendo dropped the news about its next Switch model, it didn’t quite match the rumors or expectations. The new Switch would have a larger OLED screen, improved speakers, more internal storage, and a better kickstand. Notably absent in that announcement: any mention of improved system specs or 4K output.

That leaves us with the Nintendo Switch OLED Model, a console enhancement we’ve been using for the last week that feels like a half-measure, yet still manages to offer some clear improvements over its predecessor.

The upside of OLED

Let’s start with the easiest point of comparison: The OLED screen is a gorgeous upgrade when compared to the LCD screens of the standard Switch and Switch Lite. It’s the predictable star of the show here, but it’s also an improvement that’s hard to properly convey.

I’m not obsessive when it comes to screen quality, and I was initially concerned that the difference between LCD and OLED would be insignificant. It’s actually quite stark. The colors on the OLED Switch’s screen are much more vibrant and striking. Mario’s classic red cap pops dramatically in the middle of a kart race or while zooming across Lake Lamode. Pikmin stand out among the lush green of an apocalypse as they sprint to their deaths.

The OLED struts its stuff best in areas of high contrast. There are moments in Metroid Dread when the screen is almost entirely black, and all that’s visible are glowing bits of Samus’ armor. On an LCD screen, moments like this would have something closer to a dark gray appearance, but on the OLED Switch, the screen becomes a void, with an occasional bright laser blast breaking through the darkness.

Is it so much better that I’d suggest tossing your existing Switch into the ocean? Heck no. But if you’re the sort of person who focuses on visual fidelity, you’ll be amazed at just how much color data is lost on a non-OLED screen.

In addition to delivering improved blacks and colors, the OLED Model’s screen is also 13% larger than that of the original Switch, jumping from 6.2 inches to 7 inches. This seems like a weirdly small figure, almost to the point of being unnecessary. As with the color difference, I had doubts I would even notice. And as with the color difference, I definitely did. I found the screen size boost to be even more impactful than the color improvements brought by the OLED screen.

When testing the OLED Model in handheld mode, the jump in screen size made it feel like the action on the screen was taking up far more of my field of vision than on a normal Switch or Switch Lite. I could play a game like Metroid Dread and feel more immersed than I had before.

This is partly to do with the literal screen size, but also because the OLED Model greatly reduces the width of the original Switch’s bezels. On the launch model, the bezel is three-quarters of an inch on the sides and a half-inch on the top and bottom. On the OLED Model, it’s about half that, which means you don’t feel like you’re carrying this large black frame around whenever you’re playing a game.

And even though the new Switch model does not actually increase the resolution at all, its larger screen makes it a bit easier to see some games that have small text or icons (like the just-released Diablo 2 remake) when playing in handheld mode.

We’ve all made fun of the fact that one of the major features of the OLED Switch is an improved kickstand. There was no doubt that the original Switch’s kickstand was next to worthless; it was flimsy and could snap off at the drop of a hat, and we brutally knocked it in our review. The original kickstand also only had one viable angle at which it could stand. If that angle wasn’t ideal for your sitting situation — say, if you were sitting at your desk, and the angle was too steep to see the screen — you were out of luck.

Nintendo has dramatically revamped the kickstand for the OLED Model. Rather than being a single, flimsy piece of plastic on one side of the Switch, the stand now extends across the entire length of the device. It’s also fully poseable and will hold the Switch at any angle you please. Wave goodbye to having to lower your desk chair to toddler height just to play Mario Kart 8.

Paired with OLED Model’s larger screen, the kickstand actually makes playing on a desk or table far more viable, such that you can sit a bit further back and still follow the action.

The OLED Switch brings with it some other upgrades that are nice, but whether you notice them will depend on your use cases. The internal storage is now doubled to 64 GB, but that’s still pretty paltry, and will likely still require that you pick up a microSD card after installing three or four games.

Nintendo says the speakers are “better,” though the difference between the new and old ones is incredibly subtle and would probably require a very attentive ear. Don’t expect Dolby Atmos to be blasting out of your OLED Switch.

There’s also the nice addition of an Ethernet port built into the dock that comes with the OLED Switch. While most people will find Wi-Fi to be perfectly serviceable for their Switch needs, being hard-wired is definitely an upgrade if you find yourself gravitating to competitive games like Splatoon 2. With the original Switch, you would have had to purchase a separate USB Ethernet adapter in order to connect directly to an internet line, but here that becomes unnecessary.

There’s no doubt that the OLED Switch offers some very nice improvements to the original model. But it still hasn’t corrected all of the issues that have existed on Switch hardware since the system was first released in 2017.

The Joy-Con controllers that come with the OLED Switch haven’t been modified at all (apart from the addition of a new white color). For years, it’s been clear that the design of the Joy-Cons is faulty, resulting in drift that makes them useless. The issue is so common that a number of class-action lawsuits have been filed against Nintendo. Nintendo has continued to replace broken Joy-Cons through a mail-in program, but the company has yet to announce any plans to improve the controller or extend its life span. It’s hard to believe that a company whose products have typically been considered to be indestructible would be cool with such widespread failure of its flagship controller, yet here we are.

Also, for a system whose primary benefits exist only during handheld mode, the OLED Switch is not terribly ergonomic. Anyone who’s played a Switch game in handheld mode for longer than an hour or two can attest to the hand cramping that occurs. These issues can also be traced back to the Joy-Cons, which were designed more for versatility than long-term comfort in a handheld environment. It’s long past time that Nintendo reevaluated whether the Joy-Cons are the right way to go moving forward, or if there’s a solution more suited for a human hand that would work better.

The OLED Switch is loaded with improvements that you’ll instantly see when taking it out of the box. Yet it’s still hard to ignore that it lacks the upgrades that dedicated fans have been asking for: a more powerful processor and graphics chip. Nintendo has repeatedly denied plans that a 4K Switch is on the way, but given the frequency and reliability of the reports, such a device could easily arrive around this same time next year.

Taken on its own, the OLED Switch is a big improvement over the launch model. But it’s not so big that I’d recommend everyone, or even most people, throw out their old hardware in favor of this device. For someone who has never purchased a Switch and is deciding whether to spend $50 more on the OLED model, I’d say it’s worthwhile. For everyone else, the waiting game continues.

The Nintendo Switch OLED Model will be released Oct. 8. The console was reviewed using hardware provided by Nintendo. Vox Media has affiliate partnerships. These do not influence editorial content, though Vox Media may earn commissions for products purchased via affiliate links. You can find additional information about Polygon’s ethics policy here.