Civilization 6 has been out for almost three years, with two major expansions released in the interim. But it’s still delivering surprises and delights.

With this year’s release of the World Builder, players can create their own handcrafted maps, ranging from original conceptions to interpretations of popular fantasy worlds, to cartographic realizations of real-world locations.

I love and regularly play some of the real Earth maps created by modders and available via Steam Workshop, particularly Greatest Earth Map from modder Gedemon. It’s part of a map pack called YnAMP that includes massive, detailed maps of Earth and of various constituent parts.

Greatest Earth Map is a highly satisfying alternative to Civilization 6’s built-in Earth map, which is only playable at a much smaller size. I find that its standard map is far too small to give a real feeling of history’s wide span. A spokesperson for Civ developer Firaxis says the company only offers this one size because it “provides the best experience balancing size and gameplay,” adding that other official maps might be released in the future.

For example, playing in True Start Location mode (TSL), which places a civilization in its geographically and historically correct location, is a problem if you want to play as England or Japan, as those islands are tiny. The south coast of England is only three tiles wide in the built-in map, compared to eight tiles on Greatest Earth Map. This is the difference between creating two tightly packed cities in Britain, or four, well-spaced cities with room to sprawl and grow. 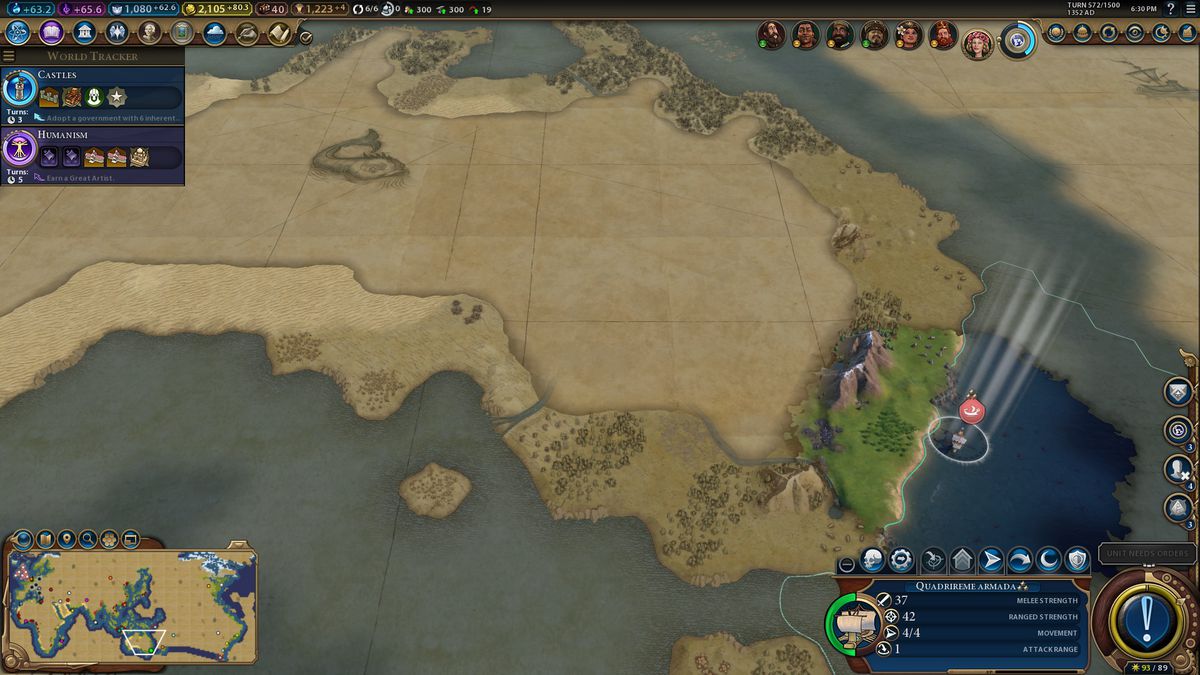 A happy arrival on the east coast of Australia which, unlike in real history, is deserted.
Gedemon/Firaxis

Real world TSL maps allow me to tinker with history. I recently played Greatest Earth Map as Eleanor of Aquitaine (English), and tried to recreate the British Empire. Beginning with the city of London, I succeeded in colonizing the north of England and Ireland, while subduing a city state in Wales. Historical realism was provided by my neighbors: I held off ransom demands from the Vikings as well as intense French hostility. I focused on populating sea lanes with trade routes, and (like Eleanor’s descendants) relied heavily on archers for defense.

In time, I settled the Atlantic seaboard of North America, and expanded across Canada, extinguishing the northern expansion of the Aztecs, which had previously overtaken the native Cree around the Great Lakes.

Finally, I expanded into Australia, New Zealand, and Southern Africa, making use of a peerless and ruthless navy. During this time, I made myself extremely unpopular with rival leaders, and was in a state of constant war. I was unable to take India, because it had become a highly advanced civilization which dwarfed my own.

All of this has some historical resonance. It was a great challenge and a ton of fun. But it was only partially true to history. In the real world, Britain’s expansion was partly funded by West African slavery, which is not a part of Civilization games. Also, the British relied on small naval stations scattered around the world, such as Singapore, Hong Kong, and Gibraltar. Such places cannot thrive in Civ 6, because they are quickly smothered and subsumed by any local civilization’s cultural blanket.

But despite the game’s limitations, it does offer an opportunity to recreate and to rewrite history. In other games, I created a highly advanced South American Inca civilization, which steadfastly refused to expand outside its own continent, but which won the game by focusing on technology. I also played as Japan, creating a pan-Asian empire that expanded exclusively through cultural dominance. 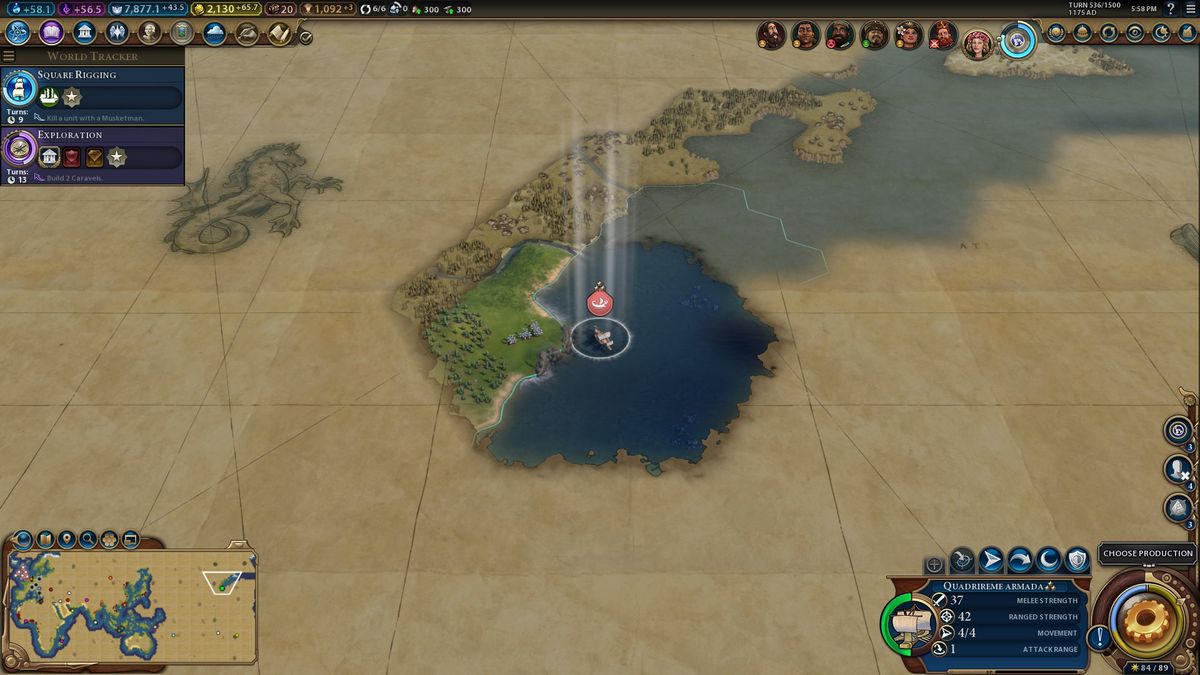 A quiet coastline hides an inland empire of Aztecs
Gedemon/Firaxis

Secrets of a Great Map

“It’s always fun to answer questions like: Can you create a Roman empire the size of the historical Pax Romana?” Ed Beach, lead designer of Civ 6 told me in an email interview. “I think our players like to see ahistorical outcomes as well. Can Persia roll over Greece and dominate the Mediterranean? What if the Aztecs did defeat the Europeans and became the first nation into space?”

“Handcrafted maps need to reflect the same distribution of terrain types that you see out of our standard, scripted maps,” Beach said. “You want to see numerous rivers, mountains, rainforests, and woods, but not in such a dominant or repetitive fashion that one terrain type completely overwhelms a section of the map.

“To realize this, map creators working with real-world locales should feel free to tweak reality a bit for better gameplay. So rather than representing the Amazon as a mass of jungle on grassland tiles, they’ll want to throw in some clearings and hills, maybe even a small lake or two. Likewise the Sahara should have plentiful oases, a few plains tiles, and some of the hills there should be exaggerated into mountains. It’s fine to have strong regional variations, but you want to prevent creating sections of the map that are unworkable for development of nice, powerful cities.”

These maps were packaged up into a set of Earth maps. “When Civ 6 was released without any Earth map, I converted and edited my pack to the new game,” he says. “ I added extra non-Earth maps like fantasy maps, and named it YnAMP.”

Gedemon concedes that large maps can be a problem for players with slower PCs, especially late in games. Stability issues are exacerbated in larger maps. Some map conversions from early Civ games are currently susceptible to crashes, a consequence of the release of the most recent expansion Gathering Storm. It’s always worth taking a look at the modder’s notes before downloading a map.

Gedemon makes changes to his maps, according to feedback from players. Earth maps are often deformed and rescaled according to players’ needs: Japan is almost as large as California; Siberia, an area that’s rarely used in games, is smaller than in real life; and the Atlantic Ocean isn’t much wider than the Republic of Ireland.

Still, these maps are recognizably Earth. (It’s worth noting that the maps familiar to all of us since childhood are also deformations, in which countries close to the poles are unrealistically large.)

“Real-world maps are a kind of role-playing,” says Gedemon. “The large size adds an epic sense to the game. It gives your empires some room to breathe and grow. It allows you to play against multiple civilizations in tight, competitive areas like Europe, or to focus on growing in more open spaces.”

Civilization 6’s World Builder came online earlier this year and allows players to build their own maps. It’s still a work in progress, and it’s not yet clear when maps will be available to share. But it offers access to all the game’s features, including natural wonders. Players can create neglected geographic areas, such as a home state or a favorite country, or the lands of a beloved fantasy novel.

Daniel Quick is a host of Polycast, a strategy podcast for Civilization games. He’s been writing blogs and podcasting about Civ games for the past 20 years.

“The most important thing about maps is replayability,” Quick says. “A randomly generated map is different every time, but a handcrafted map is always the same shape. But you can play as different civilizations, or start in different locations, or give yourself different challenges.”

One of the best things about playing a real-world map is the option to choose opposing civilizations. Clearly, playing as the United States of America is a very different experience if the Cree, Canadians, Aztecs, and all South American leaders are in play, as well as multiple city states like Cahokia and Toronto.

“Even though it’s the same map, the players are different,” says Quick. “They have different strengths and weaknesses based on where they’re starting on the actions that they take. Even if you’re the same civilization and you’re in the same spot again and again, you can make different choices based on where you settle and who you decide to fight in wars.”

Now that World Builder is out there, new and interesting maps are likely to become more common, giving Civilization 6 new life in the time between now, and the next game in the series.

“People are just scratching the surface of the capability of World Builder,” says Quick. “I think it’s probably going to take the better part of a year to be able to see it’s real potential.”

Civilization 6 continues to intrigue strategy players. And if history is any guide, we should be hearing about the next game in the series some time in the next couple of years.