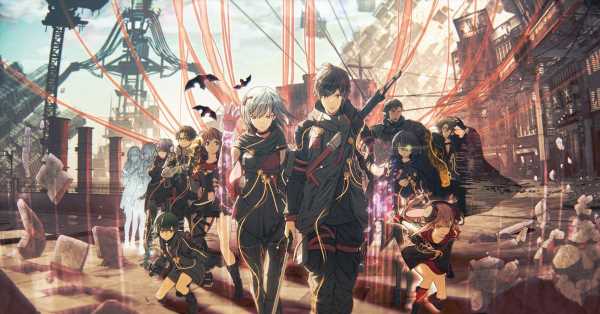 Sequels and spinoffs are everywhere in games. That’s because creating something new can be risky. Scarlet Nexus, Bandai Namco’s upcoming role-playing game, surprised me. It has a strong foundation as a potential future franchise, with an above-average narrative and fun gameplay and characters.

The game takes place in a fictional country called New Himuka that has been invaded by dangerous creatures called Others. These creatures fall from the sky, part of a phenomenon called the Extinction Belt. Society has been able to utilize a certain “psionic hormone” in the human brain that allows people to develop supernatural powers, such as cryokinesis and air manipulation. Humans with these powers are called “psionics,” and they’re scouted and recruited by the Other Suppression Force, or OSF.

You have the choice between two protagonists, Yuito Sumeragi and Kasane Randall, each of whom has their own perspective on the game’s plot. Other Japanese RPGs have featured concurrent plot lines before, such as Tales of Xillia, but in that game, there weren’t enough differences between the protagonists’ paths to warrant such a mechanic. By contrast, the narrative beats of each protagonist’s respective route in Scarlet Nexus are varied enough to be notable for the majority of the game. There are certain revelations and substantial lore dumps that only Yuito’s or Kasane’s crew experiences, so it’s necessary to play through both paths in order to fully grasp the entire context of the game’s story. It’s worth doing; the plot takes some wild turns.

Each protagonist also has a set crew that follows them throughout their adventure, and they’re all a fun bunch. Bonding events popularized by series like Persona are present in Scarlet Nexus. You get to learn more about each of your party members’ backstories and personalities by conversing with them at the Hideout during the intermissions between the game’s chapters.

The dual-protagonist structure allows both characters to shine, with each path of the game also balancing out the development of a dozen other characters, half of whom join Yuito, while the others join Kasane. The bonding episodes are entertaining, too. For example, during some of these episodes, Kasane’s straightforward personality clashes with the more prideful demeanor of her teammate Shiden, causing him to interpret Kasane’s rational advice as personal insults. Her no-nonsense attitude also allows her to shut down the playboy-like advances of Kagero with snide remarks. Then there’s Yuito, the typical kind-hearted anime hero who’s always down to help and also can’t tell when a girl has a crush on him.

These interactions provide a happier contrast to Scarlet Nexus’ darker moments. But the strength of these scenes makes it more disappointing that Wataru Frazer and Haruka Frazer, the groups’ twin navigators, don’t get their own bonding events, despite being major characters in the main cast. The Frazer twins don’t have any direct impact on the gameplay, as they just sit in the background and provide helpful tips during battle, but I would have loved to learn more about them.

Not only are the different character personalities balanced well between Yuito’s and Kasane’s respective parties, but the gameplay does a great job of having each member complement the protagonists’ respective fighting styles. You can utilize a mechanic called the Struggle Arms System to borrow your team member’s powers so as to enhance your own combat prowess.

Yuito specializes in close-quarters combat with a sword, so borrowing Luka’s teleportation ability lets him quickly close the gap between him and an enemy. Of course, you can also teleport away from the enemy and fight from a distance using Yuito’s psychokinesis power. Since Yuito is mainly going to be up close and personal, he can borrow Gemma’s sclerokinesis to nullify all damage and knockback, allowing him to dish out as much destruction as he can without being interrupted. Initially, you can only borrow one SAS power at a time, but eventually you’ll unlock the ability to activate multiple at once.

Meanwhile, Kasane is a midrange fighter equipped with knives. While both protagonists can hurl objects like cars and street poles with their psychokinesis powers (think Control), Kasane seems to have the advantage here, since she can capitalize on Kyoka’s duplication power, allowing her to copy and add to the number of objects thrown. Additionally, if enemies get too close, Kasane can utilize either Arashi’s hypervelocity power to slow down time or Kagero’s invisibility to retreat and reposition herself.

Scarlet Nexus does suffer from a bit of Kingdom Hearts syndrome, where it’ll be the protagonist dishing out the vast majority of the damage compared to their allies. While I wouldn’t call the teammates useless, I did notice a handful of times when they were just standing around doing nothing while I was busy hacking away at enemies. Thankfully, they do heal you when you’re low on health, and they sometimes revive you if you fall. You can also set their AI behavior to focus on strategies, like targeting the same enemy as you or evading them altogether.

As you deepen the bond level between you and your teammates, you’ll also unlock cool new mechanics, such as a chance of a party member blocking a single attack for you, or summoning them for a follow-up attack of your own. As you get further in the story, more tactical options open up, making combat more fun and fluid.

I also appreciated Scarlet Nexus’ incredibly simple weapon upgrade system. You can find weapon crafting materials from pickups in dungeons or drops by enemies, and you can also purchase armor and accessories for your characters. If the attack or defense number is higher than the one you’re currently wearing, equip it — boom, that’s it. There’s nothing convoluted here, like innate weapon properties or other overly complex systems that burden some JRPGs (looking at you, Tales of Zestiria).

There are few places where Scarlet Nexus falters. Its dungeons consist of segmented arenas, with the big areas obviously hinting at enemy encounters; there’s very little variation in dungeon design. My biggest gripe is the side quests, which are literally all fetch quests. NPCs will ask you to kill a certain enemy in a specific way, then offer you a reward after you report the task as finished. These rewards aren’t really even worthwhile anyway, as you can find, purchase, or exchange materials for many of them in the game’s shop.

It’s too bad these side quests don’t take more advantage of Scarlet Nexus’ rich lore and politics, which you learn more about through the bonding events. For example, retired OSF members have trouble adjusting to civilian life after leaving the organization. There’s also a segment of the population that was born without psionic powers, and thus is looked down upon. There are themes of classism, ableism, and discrimination in the game that could have been explored even further for more world-building.

Scarlet Nexus has a colorful cast of characters and an impressive variety of gameplay mechanics, but for me, the unexpected cherry on top was its story. The chapters are very well-paced, and none of them overstays its welcome. 2021 is seeing quite a lot of JRPGs, with many of them being continuations of existing franchises or just remasters. But after having played through both of Scarlet Nexus’ storylines, I believe it has the potential to be a surprise hit this year for fans of the genre. Don’t let this brand-new futuristic brainpunk adventure slip past you.

Scarlet Nexus will be released June 25 on PlayStation 4, PlayStation 5, Windows PC, Xbox One, and Xbox Series X. The game was reviewed on PS5 using a pre-release download code provided by Bandai Namco. Vox Media has affiliate partnerships. These do not influence editorial content, though Vox Media may earn commissions for products purchased via affiliate links. You can find additional information about Polygon’s ethics policy here.