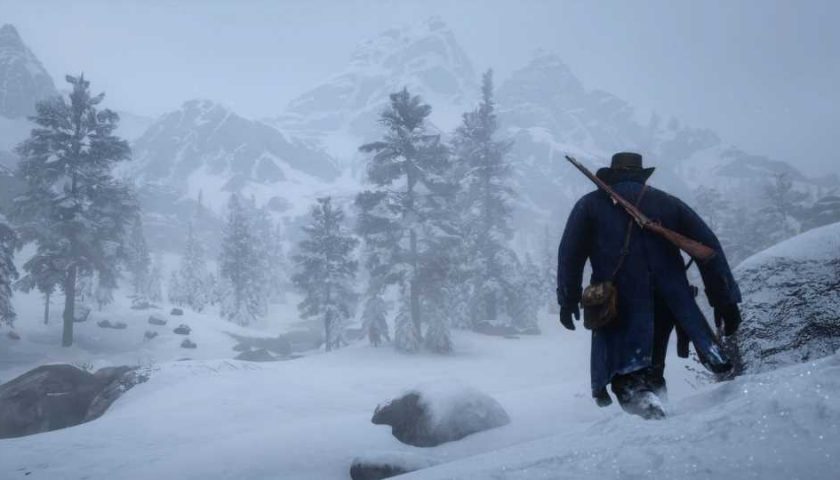 Ride to the far northern reaches of Red Dead Redemption 2's overwhelmingly huge map and you'll find yourself lost in a freezing expanse of jagged rocks, glacial waterfalls, deep snowdrifts, and iced-over lakes. This is the Grizzlies, an inhospitable chain of mountains seemingly locked in an eternal winter. Rockstar's melancholy slice of the American West is one of the most convincingly natural game worlds ever created, encompassing a variety of landscapes, from lush farmland to dry, scrubby deserts. But there's something about the cold, isolated Grizzlies that has always captured my imagination.

Outside of the bustling Saint Denis, RDR2's world is sparsely populated compared to most open world games. But wherever you go, whether it's the plains of the Heartlands or the swamps of Lemoyne, there are traces of people. As you trot around the wilderness on your horse you'll run into bootleggers, fishermen, hunters, wandering merchants, drifters, escaped prisoners, and other oddballs. The roads are mostly quiet, but the odd stagecoach or posse of riders will occasionally rumble past and whip up a cloud of dust. But when you're up there in the Grizzlies, it's like being on another planet.

As you move northwards, you'll see plumes of breath start to escape from Arthur's mouth. Snow will appear in patches, then eventually blanket the ground. The feeling of transitioning from the relatively temperate climes of New Hanover to the frigid Grizzlies is palpable, and happens so gradually that you barely notice it happening. One minute you're surrounded by forests and winding rivers, the next glaciers and snow-whipped mountain peaks. It's a big map, but these subtle climate transitions make it feel even bigger. You get a real sense of being on a journey when you explore this world. 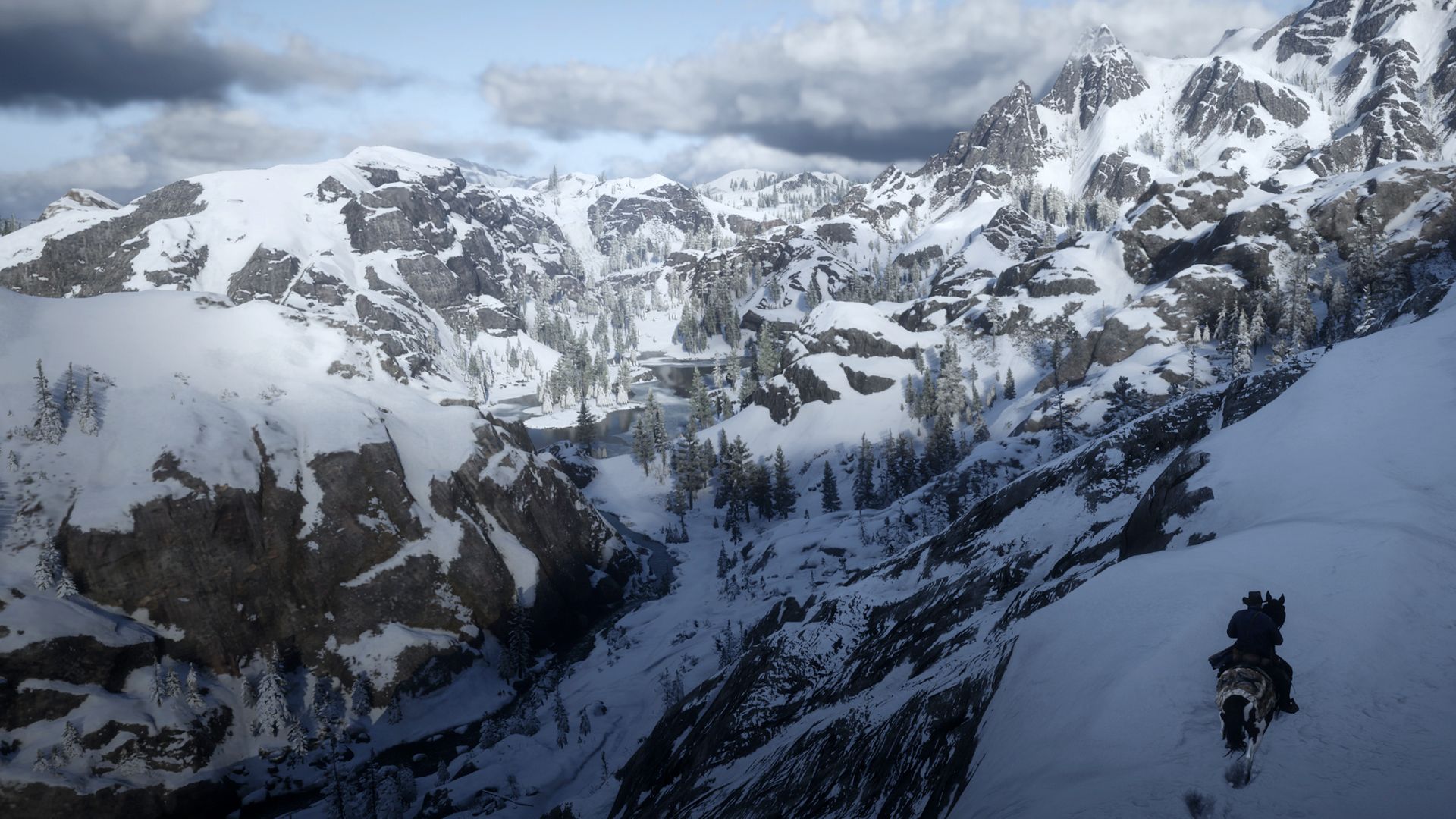 Sometimes I load up RDR2 just to wander around aimlessly, and I always find myself heading towards the Grizzlies. Out here it's just you, the land, and the wildlife, which makes it a uniquely peaceful, serene place. I love hiking a trail through the powdery, unspoiled snow, listening to the creak of tree branches, the howl of the wind, and distant animal calls. With a good pair of headphones, it's absolutely transporting. RDR2's audio design is exceptional throughout, and this region is one of the best examples of how absorbing the ambience of the world can be. I frequently just stop and listen to my surroundings.

Rockstar's attention to detail comes to life here too. I love all the small touches, like the way snow slides off the trees when you brush past them, or the ice cracking and warping as you teeter tentatively across a frozen lake. But mostly I just love the isolation. I've often dreamed of a Red Dead Redemption game set in the very early days of the Old West, when very few people had settled in this part of the world. Exploring the Grizzlies in RDR2 is what I imagine that would feel like. There's something evocative about being the only person for miles, alone with your thoughts in a beautiful, untouched landscape. 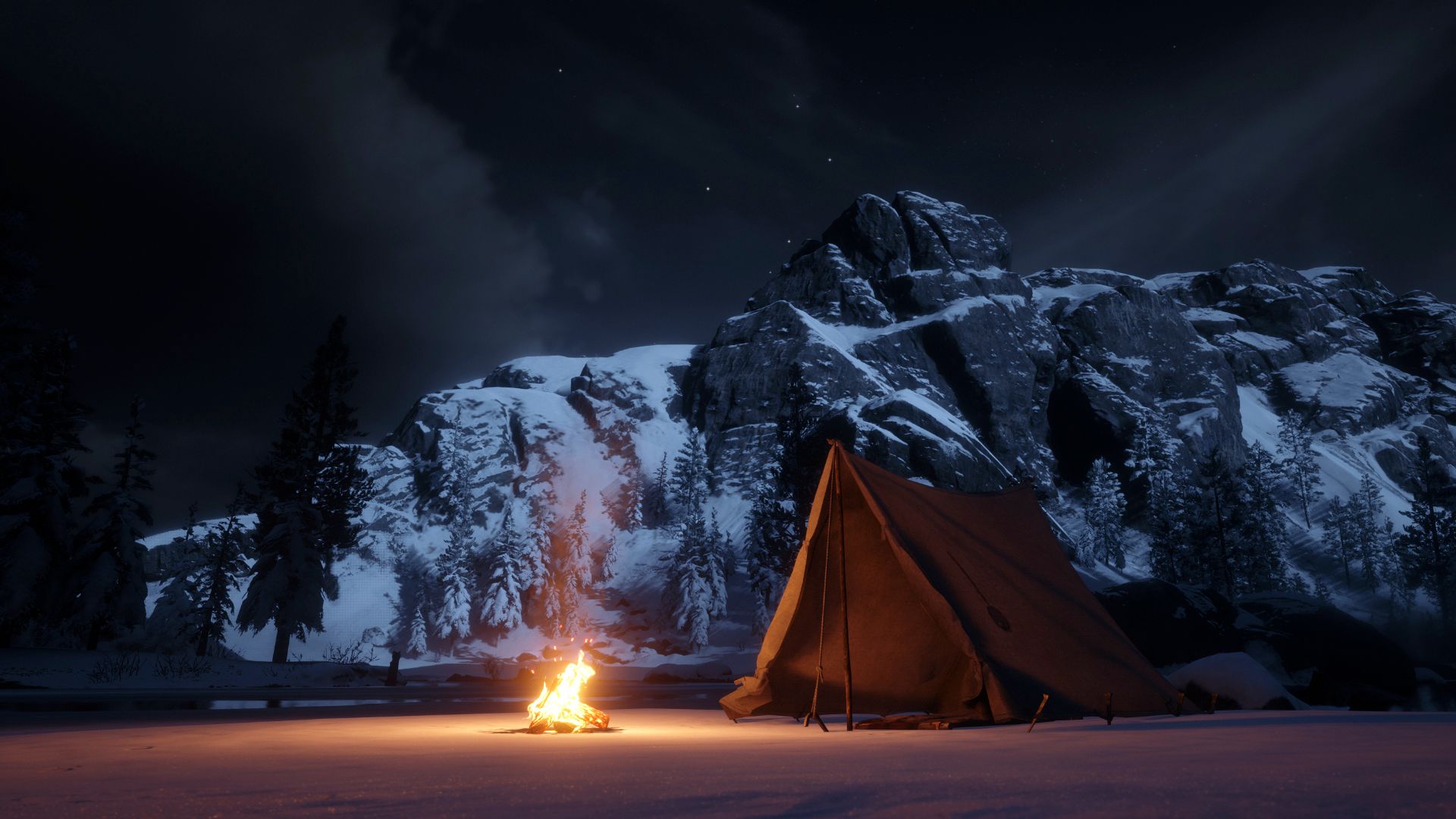 It's a stunning place, but it can be a dangerous one too. Sometimes I get so drawn into the beauty of my surroundings that I stumble into the path of a hungry wolf or territorial bear. But for the most part it's easy to avoid these predators. Their presence gives the Grizzlies just enough of a glint of danger to not seem like a casual stroll in the park—but without you feeling like you're constantly being hunted. You have to dress the part too, making sure you wrap Arthur up in appropriately warm clothing before venturing into the cold. I enjoy the ritual of draping myself in fur-lined clothing before riding up there.

There aren't many open world games where pure, player-driven exploration is just as entertaining as the game that happens to be set there. The fidelity, detail, and atmosphere of RDR2's map remains unrivalled, and it's a rich enough place that you can spend hours there without doing anything in particular. There are a lot of places I enjoy spending time in this world. The moody, gas-lit streets of Saint Denis look incredible at night—especially when a rainstorm blows in. But it's the Grizzlies I keep coming back to. This stark, wintry, lonely place is quietly one of the most impressive places Rockstar has ever built.