Game designers face a great challenge: How can they demonstrate that a player’s basic actions are meaningful?

The developers of a game have to reinforce why each action is important, especially if I’m going to be repeating it thousands of times across the campaign. This is true whether I’m picking a flower or pulling the trigger of a gun.

The designers of many first-person shooters attempt to invest their weapons with meaning by showing me how effectively they destroy my opponents. It’s easy to see how my actions are making a difference in the virtual world when flesh tears and blood sprays the moment my bullets pierce virtual skin. I have to look outward to feel the power of the gun in most games. That power is demonstrated by looking at my targets, and witnessing how this great metal thing in my hands affects them.

Black, an overlooked 2006 shooter from Criterion, the developer of the Burnout series, works differently. Black turns my focus inward.

I wouldn’t blame you for originally skipping Black based on its visuals. It looks anemic; generic gray streets run through generic gray buildings, with a yellow filter rinsing out the impact of the bullets until it looks like a toxic beige.

Criterion built Black’s aesthetic on particle effects and light shafts, and the developer relies on those elements heavily to bring energy to settings that look indistinct otherwise. I can hunt enemy patrols in a forest or fight my way to a dilapidated foundry, and the biggest difference is that the ground color is a mottled green in one case, and a mottled brown in the other.

This bland aesthetic is unfortunate, because it masks one of the most powerfully-designed experiences I’ve ever played. You have to play Black to understand its appeal, for better or worse.

I returned to Black now that it’s available on the Xbox One through backwards compatibility, and found an FPS with a perspective shift so subtle, so idiosyncratic — so brilliant — that it made me reconsider the way I see the entire genre. Black isn’t a traditional power fantasy, nor is it the bog-standard mid-2000s gauntlet against generic foreign opponents that it may appear to be on the surface.

Black is a shooter about you. It’s a game about your finger on the trigger, the gun in your hands, and how possessing these booming, clacking, churning tools is a power unto itself. 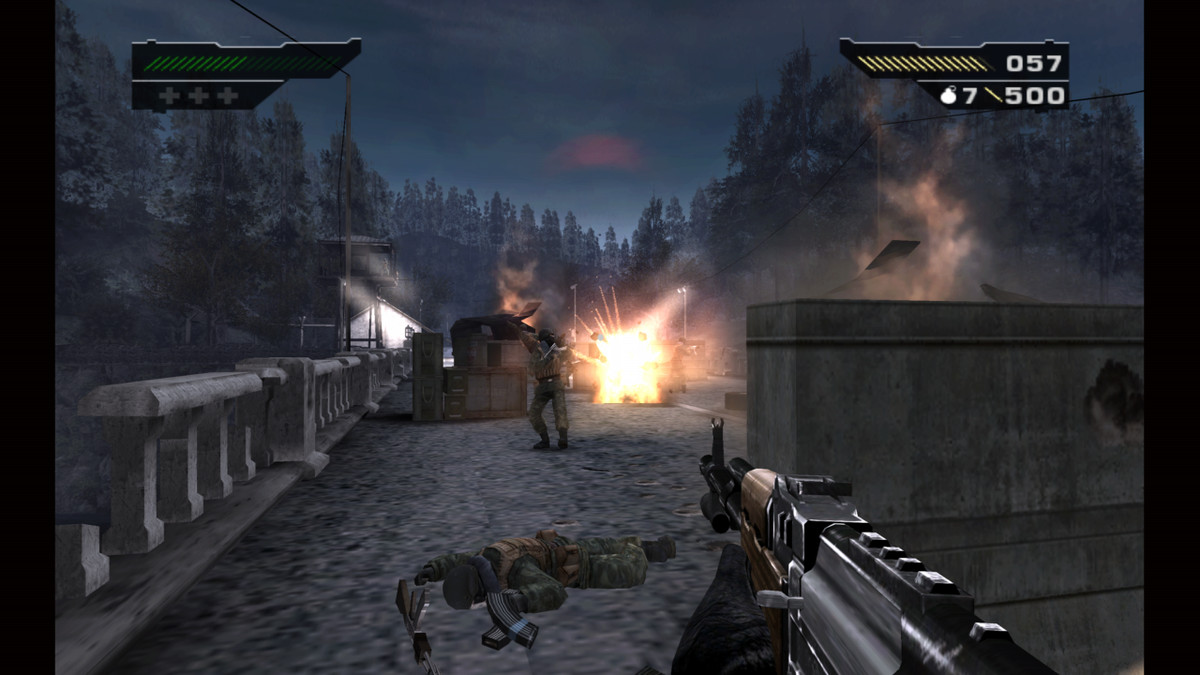 My TV is over five years old, but every gun in Black thunders through its speakers. Even pistol shots sound like the impact of some great missile. My weapons seem to have a unique “voice” compared to the firearms of my opponents, much like the sound design used in the action film John Wick. My guns sound heavier than anyone else’s in the game; stronger.

This was part of the game’s intentional design, as revealed by this archived interview with Criterion’s Chris Sweetman about the game’s sound design:

The premise here is that each enemy firing at you should be a member of a choir. He should have his own distinct voice and when played with other members of the choir it should be a harmony — not cacophony.

We decided early on to break with tradition and create a system which would allow us to disregard what weapon model was being used and create a sonically exciting fire fight. The system is incredibly simple (I find the best ideas always are). We would disregard the weapon model and assign each enemy a different timbre of weapon.

Archived blog posts and interviews with Criterion reveal a team that believed the FPS was not only defined by the clarity of its sound, but who felt they could create something that had an essentially different perspective to the rest of the genre.

The way of the gun

The studio wanted to do for the first-person shooter what it had previously done for the racing game in Burnout. Criterion was trying to create an environment where simply possessing an agent of destruction was a rewarding experience in itself. Part of that involved spending an intensive amount of time making the guns look used, as well as realistic.

“In terms of budget, the weapons in Black used approximately the same polygonal/texture budget as the player car in Burnout,” artist Chris Healy wrote in an official blog post. “…Also we didn’t want the ‘fresh out of the box’ look to the weapons most games seemed to have at the time. We wanted to inject real character and history into every weapon, as if each one has a story to tell … The metal finish was scratched and worn as if it had really been used, the wood was pitted and scarred, dust and dirt was suggested in the inaccessible intricate corners.” 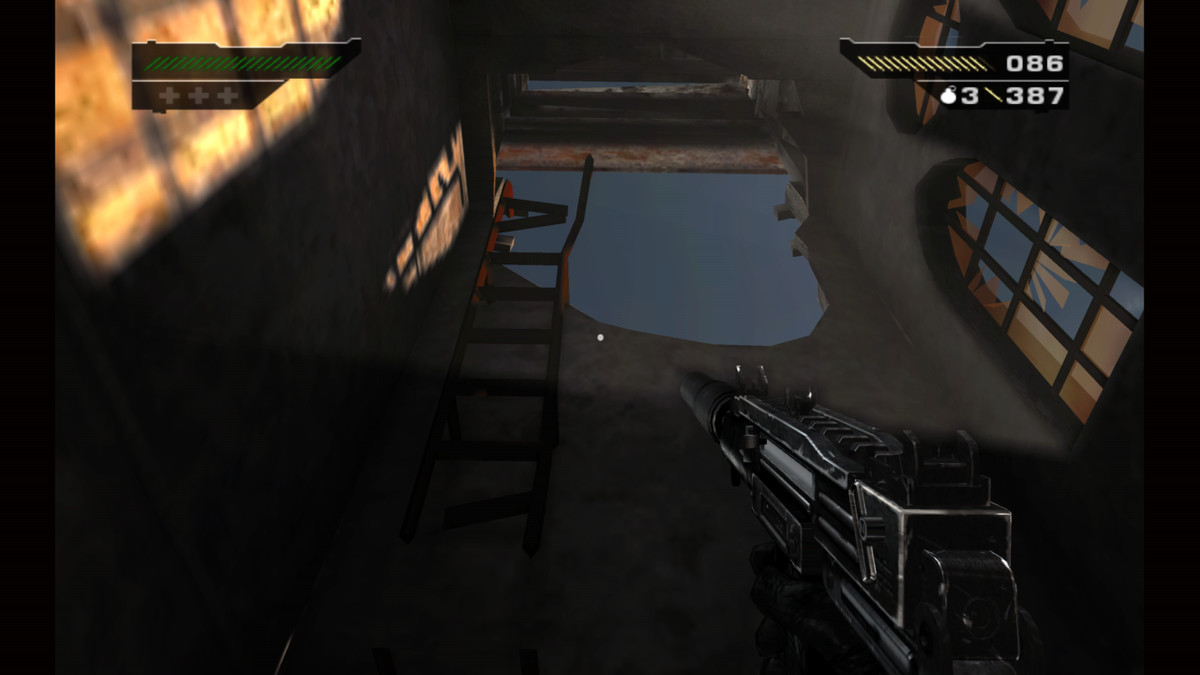 The power of the gun isn’t just expressed through the visuals or the sound design. Every aspect of my interactions with my in-game guns is satisfying and drives that message home.

A blur effect washes across the screen when I reload my gun in Black. My weapon rises to fill nearly 50 percent of my monitor with absolute sharpness. I stuff ammunition back into its metal carcass, and the enemies around me finally reel back into focus as I send another hailstorm of bullets across the makeshift trenches of a bombed-out city.

It would be frustrating and dangerous to lose sight of the people shooting at me in a target-focused competitive series like Call of Duty. It robs me of the ability to see how my actions — shooting, in this case — are impacting the state of the world.

But this selective focus on the gun is itself the point in Black. The view shifts the perspective off of my enemies and back to the primal power of the gun in my own hands, giving me a moment to pause and appreciate my capabilities. “Once I reload,” the framing seems to say, “you are all in serious trouble.”

Other aspects of Black’s design also show this perspective shift. I have to use a shotgun blast to open locked doors, and the door hangs in its frame for a split second before it crashes to the ground. The developers of Black flipped the position of the ejection port on their AK-47 model, sending a cloud of bullet casings into your view when you unleash a spray of fully automatic fire instead of away from it. Zooming in to aim doesn’t move the weapon closer to my virtual head so I can aim down the sights unless I’m using a sniping rifle.

My gun is always prominently in view, booming and erupting with its chorus of might. Bullets send up sprays of obscuring particles with every impact. I can trace my path through a level by following the discarded shells — a stunning achievement on this generation of hardware.

Black also features one of most lackadaisical grenade throws in video games; the game rarely lets me throw grenades further than 10 or 15 feet. The upside is that this means I’m guaranteed to see each broken pane of glass when I toss a grenade inside a building, and all the nearby windows shatter.

Crucially, the enemies in Black do not erupt in a shower of blood when killed. They may shudder if they’re hit but don’t die, or they may attempt to dodge my bullets, but they ultimately twist and fall to their deaths in the most dramatic way possible. Bodies remain intact, even after I’ve hit them with enough bullets to chew through a small building. I’m seeing the sheer destructive power of my weapons through their reactions and the arcing paths of their bodies through the air — not the reality of their grisly deaths.

The violence feels oddly sanitized in comparison to both games of the era and shooters today. This presentation focuses on the sheer destructive power of firearms while ignoring the gushing reality of what they actually do to our bodies. 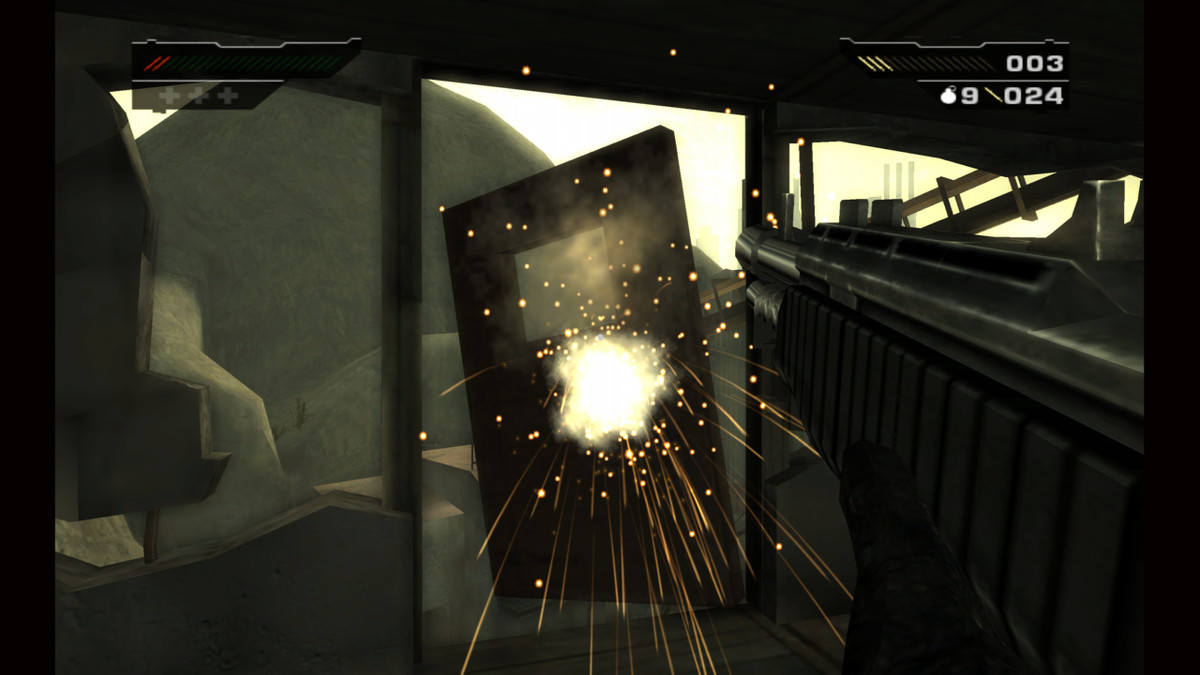 Making combat more about the hero than the people they ostensibly fight is a Hollywood conceit, and it works perfectly in Black. Leaving aside how magnificent the guns are, the sense of choreography weaving through the levels is tangible. Maps are linear, but leave just enough space for improvisation to provide the sensation of choice while ensuring momentum. It’s a narrow line to walk, but Black walks it well.

GoldenEye-esque hidden objectives and weapons litter these maps, and I have to find them to complete levels on higher difficulties. I can unlock even more empowering post-game combat by being an completionist. I unlock silver weapons with infinite ammunition after finishing Black on the normal difficulty level, for example. I can then use these upgrade guns to tackle the harder difficulty levels. Pairing infinite ammo with the RPG gives me the recipe for an absurdly good time.

The focus on the destructive nature of the guns themselves is also what separates Black from more broad power fantasies, like Doom. The appeal of Black isn’t the ability to kill demons, human beings, or any living creature, really. It’s more about having the honor to wield a shotgun that feels like it could split the sun. The aforementioned yellow filter and light shafts accentuate the loud, kaleidoscopic beauty of my core interactions with this world, even among the unfortunate blandness of its mid-2000s military shooter environments. If missing a series of shots in a graveyard results in a miniature fireworks display of ricochet sparks, concrete powder, and shattered headstones … am I really losing? 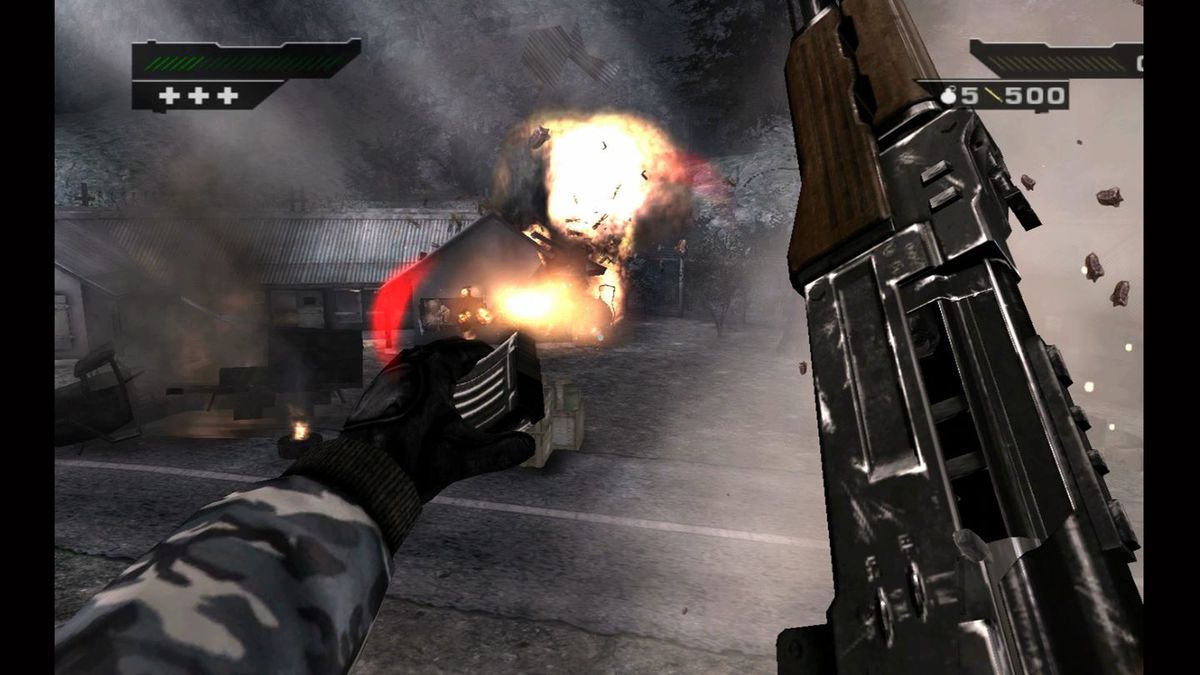 The modern trend of remakes and remasters is a valuable one, especially for a medium like video games which can often suffer from having a short memory. However, the irony of this environment is that it ignores games like Black and other titles that didn’t set the world on fire in terms of sales or industry impact, but nevertheless provide much for us to learn — and enjoy — today.

Criterion took the chance to depart from a massively successful racing franchise to make an FPS. The combination of a unique skill set and development perspective resulted in a shooter unlike any other. Cross-genre application and pollination, on this scale, in a single studio, is almost unprecedented in games. It’s Bob Dylan’s rock period. It’s Prince doing the Batman soundtrack.

Black deserves a remake but even without one, it’s worth revisiting.