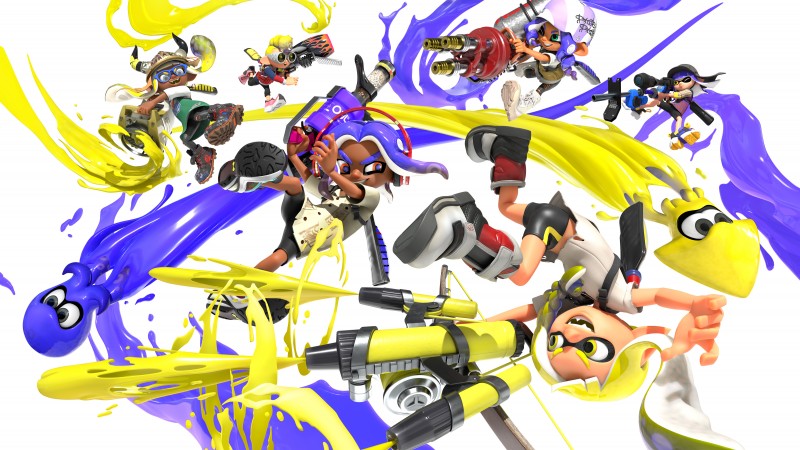 When the Splatoon 3-focused Nintendo Direct hit two weeks ago, I was pleasantly surprised by the depth of the information and how much content the Splatoon team was bringing at launch. As someone who very much enjoyed the first two Splatoon games (as well as Splatoon 2’s Octo Expansion), that Nintendo Direct was all I needed to bring my excitement levels up a few notches. However, having the opportunity to get my hands on the soon-to-be-released Splatoon 3 only skyrocketed this game up the list of my most anticipated 2022 releases.

During my 75-minute hands-on session, I was able to check out the three main pillars of Splatoon 3: the single-player Hero Mode, the 4v4 Turf Wars, and the four-player co-op Salmon Run. All three of these modes appeared in Splatoon 2, though Turf Wars has been the series’ main attraction since the first game. While Splatoon will likely always be known for its multiplayer fun, the single-player story modes of the first two games are vastly underrated. If my time with Splatoon 3’s story is any indication, the finale of this ongoing saga is poised to deliver even more satisfying shooting, splatting, puzzle-solving, and platforming.

“Obviously, with such a heavy multiplayer focus in Splatoon, I think a lot of people kind of forget about Hero Mode,” Nintendo vice president of product and player experience Bill Trinen says. “They forget just how inventive the level design and single-player platforming that they’re doing in that mode is, and just how connected it is to, I think, what is a very traditional Nintendo approach to gameplay and level design that often gets overshadowed by the multiplayer side of Splatoon. I’m hoping a lot of people will dive into it right away rather than going straight to the multiplayer side like some of those longtime Splatoon fans may do.”

I played through three stages in story mode, requiring me to employ unique tactics to reach the goal. One had me completing mini puzzles and combat scenarios to retrieve four keys to reach the end, while another asked me to constantly stop charging enemies from getting too close to me. However, my favorite stage in my time with the single-player campaign let me use the new Tri-Stringer bow weapon. This bow-and-arrow-style weapon fires a three-arrow spread that can be either rapid-fired or charged. If you charge it long enough, the arrows become mini bombs that explode shortly after reaching their targets, a technique that comes very much in handy at the end of the stage when dealing with some shielded octarians. You can also jump while wielding the Tri-Stringer to change the direction of the spread from horizontal to vertical.

Meanwhile, Salmon Run brings myriad improvements to the table, adding to the frantic pace of the mode. Sure, players can now throw golden eggs dropped by bosses, but the most impactful part of the Splatoon 3 Salmon Run experience comes from the new bosses, like the Slammin’ Lid, that crop up at a rapid clip. The diversity brought by the stable of new and existing bosses ensures you can never get too comfortable with any single tactic. The only way to truly survive a high-difficulty Salmon Run attempt is to expect the unexpected and watch your teammates’ backs. After we easily breezed through a low-difficulty playthrough of Salmon Run, we faltered in the second wave of a higher-difficulty attempt as we failed to collect enough golden eggs before the time limit. Now that Salmon Run is available at any time instead of just during select windows, and it gives you rewards you can bring into other modes, I can’t wait to really sink my teeth into this horde-style mode.

“Previously, you’d go into Salmon Run during the window that it was open, and you’d have special gear that was going to be available for that Salmon Run,” Nintendo senior vice president of product development Nate Bihldorff says. “Now, with Salmon Run available all the time, not only are you going to be going after those temporal awards, but also your progress there is feeding back into the seasonal catalog and unlocking items there as well. So, with the way the game’s economy is working with Salmon Run being available all the time is a much bigger part of that big, virtuous circle of driving you back and forth between different modes, so that you’re always re-engaging with the game.”

The final mode I played during my hands-on time is Turf War. As you might imagine, this flagship feature is as fun as ever, with small improvements making it much more enjoyable. I like being able to spawn in a specific direction after being splatted, and the new weapons and specials are extremely effective; I had a blast using the new Splatana in my third match. The new moves available to players also change traversal and combat in subtle, yet meaningful ways. The Squid Surge, where you can boost up a wall after a short button hold, is helpful for fast climbing, but the Squid Roll has the potential to change any given encounter since you can easily change swimming directions multiple times in rapid succession while being protected by a quick shield. I used Squid Roll multiple times in my session and on a couple of occasions, it felt like its utilization was instrumental in my coming out on top.

The days of a Splatoon game launching with minimal content with the promise of filling in the blanks post-launch are seemingly gone, though we’re still receiving a robust, two-year-long post-launch content plan. Splatoon 3 will include 12 Turf War stages at launch, nearly matching Splatoon 1 and Splatoon 2’s combined launch totals. The weapons screen also takes a long time to scroll through, showcasing just how much the arsenal has grown since the first game’s 2015 debut. That said, Nintendo still has an ambitious post-launch plan, with seasonal content dropping every three months for two years, several free maps and weapons, and paid DLC on the horizon.

“I think we’re already dealing with an established audience that already has their favorite modes, and for that audience, you want to be able to entice them into the different modes to play them, but for a newcomer, it really is a matter of saying, ‘Hey, look at all this stuff you can do,'” Bihldorff says. “On top of that, you can expect the same thing that happened with the other games, which is a continuous drip-feed of content coming post-launch.”

Despite the various modes I was able to check out during my preview session, there’s still more to discover in Splatoon 3. In addition to the other maps, levels, and bosses in Turf Wars, Story Mode, and Salmon Run, I didn’t get to see how Splatfests play out in this new entry, the items I’m able to peruse in the shops, and, perhaps most importantly, Tableturf Battle. While Nintendo remains largely tight-lipped on this card battler, just like the other mainstay modes, it plays into the larger Splatoon 3 ecosystem, encouraging players to check it out so they can unlock gear for use in the other Splatoon 3 modes.

“As you’re going through and playing, you’re going to unlock these packs of cards, which is another little reward you can get along the way,” Trinen says. “In Splatoon, you just feel like you’re constantly getting more things that are going to help the overall experience kind of grow and develop over time.”

After getting my hands on Splatoon 3, it has become easily one of my most anticipated games for the remainder of the year, which says a lot when you look at the release schedule over the next several months. With the Splatfest World Premiere happening in just a few days, I can’t wait to once again dive beneath the surface as my favorite kid/squid hybrid creatures. Splatoon 3 comes to Nintendo Switch on September 9. The Splatfest World Premiere is available now for free on the eShop, with the online multiplayer event running on August 27.

For more Nintendo talk from Brian, be sure to subscribe to All Things Nintendo, a weekly podcast he hosts covering the biggest news and games from the world of Nintendo.