Halfway through Sonic the Hedgehog, the notorious blue speedster chants “Guac! Guac! Guac! Guac!” at a country road bar full of American lager product placement. A few minutes later, he rips a fart so cacophonous and wet that his pal Tom (James Marsden) suggests, “Might want to check your fur on that one, buddy.”

With this one-two punch of toddleresque misbehavior, Sonic’s foray into live-action film transcends to DreamWorks Animation nirvana. Unfortunately, that means the five people looking for a gritty adaptation of Sega’s video game franchise did not get their wish: Sonic the Hedgehog is basically live-action Shrek, full of pop-culture wisecracks, grins, and occasional flatulence. Also, Sonic flosses. Twice.

The film, directed by Blur Studios veteran Jeff Fowler, opens in the heat of an explosive chase, then freezes. “You’re probably wondering how I got here,” Sonic says, in a nod to Thor: Ragnarok or maybe the 2016 meme or possibly the ancient narrative cliché, but most definitely something the movie’s core audience does not understand. In a flashback, we see Sonic (voiced with prepubescent-Jean-Ralphio-like giddiness by Ben Schwartz) on his home planet, where he’s the padawan learner of a giant photorealistic owl (of Ga’hoole?) named Longclaw. A tribe of killer echidnas forces Sonic’s interstellar travel to Earth, where he lives as a refugee in the woods of the Pacific Northwest, hiding from human civilization. The loner life destroys Sonic, leaving him to stare wistfully into windows, wishing he could be friends with guys like Tom, a local sheriff who loves movie night. But when the brilliant, bloodthirsty Dr. Robotnik (Jim Carrey) catches wind of the “blue demon” of the woods, Sonic reveals himself to Tom, and the two hit the road toward San Francisco to retrieve a lost bag of golden, interdimensional portal rings.

For all of Sonic’s hyperactive tendencies, Sonic the Hedgehog’s script “gotta go slow,” as far as pacing’s concerned. Suffering from Masters of the Universe syndrome, the writers Pat Casey and Josh Miller downshift from the opening sequence, set in the familiar loop-de-loop world of the Genesis game, to a mundane buddy-comedy routine set on Earth. An all-CG Sonic movie might have been breathtaking, based on the snippets Fowler offers early on. A movie where Tom and Sonic spend most of their time driving down a nondescript highway, with the fastest being in the galaxy buckled up in a pickup truck, is not as gripping. There are more conversations about the importance of a bucket list than Sonic spin-charges in the Sonic movie. It’s a side-scrolling adventure without any of the game franchise’s chaos.

That may actually be suitable for younger viewers, whose precious, fragile brains are unaccustomed to the potentially radical confluence of speed and visual effects. Seeing a walking, talking Sonic doesn’t feel spectacular 20 years after Peter Jackson and Andy Serkis’ take on Gollum, but if you were born six years ago, who knows? The Sonic animation is sturdy and caricatured (yes, even in quickly redesigned form), and keeps up with Schwartz, one of the few rapid-fire voices on the planet who could match the character’s lightning speed in the dialogue. Marsden, who has a track record with CG sidekicks [Ed. note: Hop is good], plays his role as the compassionate, straight-edge adult in the room without a wink — even when he’s explaining why Olive Garden’s all-you-can eat breadsticks are a steal, which he does multiple times. Kids will feel seen when they watch this story of a manic child and his patient father figure. 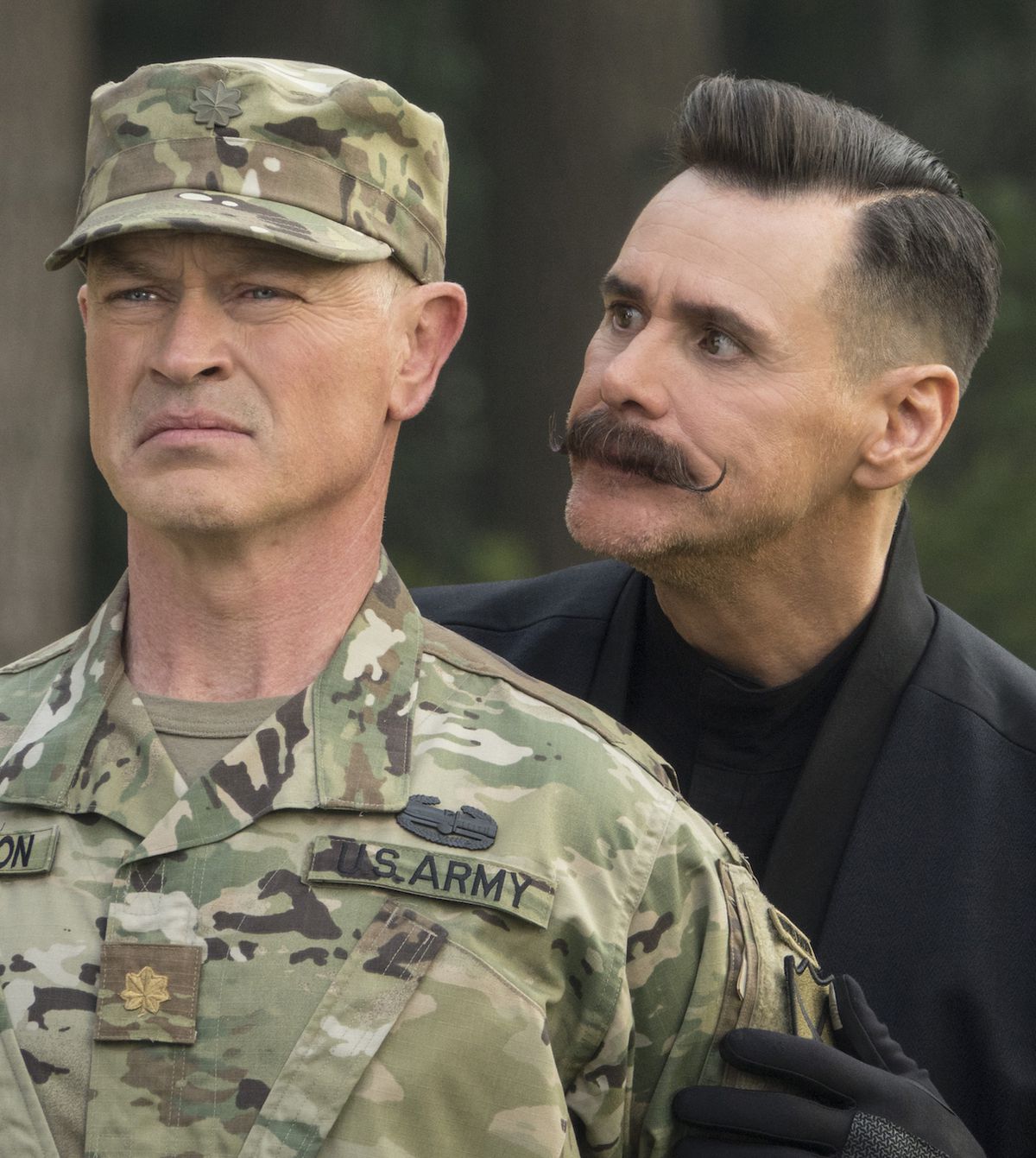 Carrey, delivering the most gonzo performance since Tom Hardy’s Venom, becomes literal comic relief for adults who wind up at Sonic the Hedgehog. His Robotnik amalgamates Ace Ventura, the Riddler, the Mask, and the Grinch into one lump of evil Silly Putty, stretching and spasming as he spits out one-liners. In his early introduction, the mustache-twirling villain chews out an army officer by asking if he has weekend plans to “drink beers and put the boat in the water,” an evocative but murky character assassination. Carrey shows up for the kids in the room, performing a three-minute dance routine inside his laser-light-filled Mad Scientist Van, but for the most part, he’s running parallel to Sonic, delighting in the cartoon logic the movie affords him.

Fowler’s background in animation helps the scant action moments feel faithful to every iteration of the games. A scene in which Sonic and Tom fend off a fleet of drones moves at an electric pace. In the bar set-piece, Sonic zips through a bar fight fast enough to slow down time, which Fowler turns into the kiddie equivalent of the X-Men movies’ Quicksilver slo-mo spectacle. When Sonic finally faces off against Robotnik, he uses signature moves, echoing boss fights of the past. There just isn’t enough of Sonic’s imaginative energy to make it a fun time for all ages.

Should we grade “kid movies” on a curve? There are great works of art that appeal to the emerging senses of small children, from Hayao Miyazaki’s playful fairy tales to the films of Amblin Entertainment’s heyday to modern, thoughtful blockbusters that survived the corporate machine, like Disney’s recent remake of Pete’s Dragon. Sonic the Hedgehog isn’t working on that level, but it’s level-headed and earnest. Schwartz delivers jokes. Carrey hams it up. That one fart is audacious. And Sonic comes to life on screen with budgetary consideration and sponsorship from Olive Garden. With the energy of a Saturday morning cartoon that comes and goes, Fowler’s movie entertains and sneaks in a message about feeling sad, alone, and unmoored. It’s not for longtime Sonic fans, but it’s guaranteed to be someone’s nostalgic favorite in the year 2038.

EU’s new AI rules will focus on ethics and transparency

Is the Call of Duty Modern Warfare Battle Royale release date coming this week?
We and our partners use cookies on this site to improve our service, perform analytics, personalize advertising, measure advertising performance, and remember website preferences.Ok