Not exactly classic, but far from modern, the Serious Sam series has always existed in a strange place in the industry. Upon its release in 2001, most critics readily called it a throwback to the golden era of shooters. With most titles trying to emulate Half-Life and its more cinematic approach, Serious Sam felt stripped back and free of excess. It wasn’t exactly true, but you could make some kind of comparison.

Fast forward to 2016, and id Software’s excellent revival of the Doom series was basically the very best Serious Sam game ever made. Practically copying what Croteam had started 15 years earlier, it catapulted the “throwback” nature of Sam into the modern era. Without even doing anything, Serious Sam was cutting edge in its design philosophy.

In the interim, though, Croteam had struggled to figure out exactly what to do with the character. While The First and Second Encounters are classic games, the other Sam titles disappoint in a lot of key areas. Be it repetitive encounter design, lackluster level variety, or questionable design choices, it kind of felt like Serious Sam was ready to be put to bed. Serious Sam 4 makes some strides to correct those problems, but certainly won’t be catapulting the series back into the limelight. 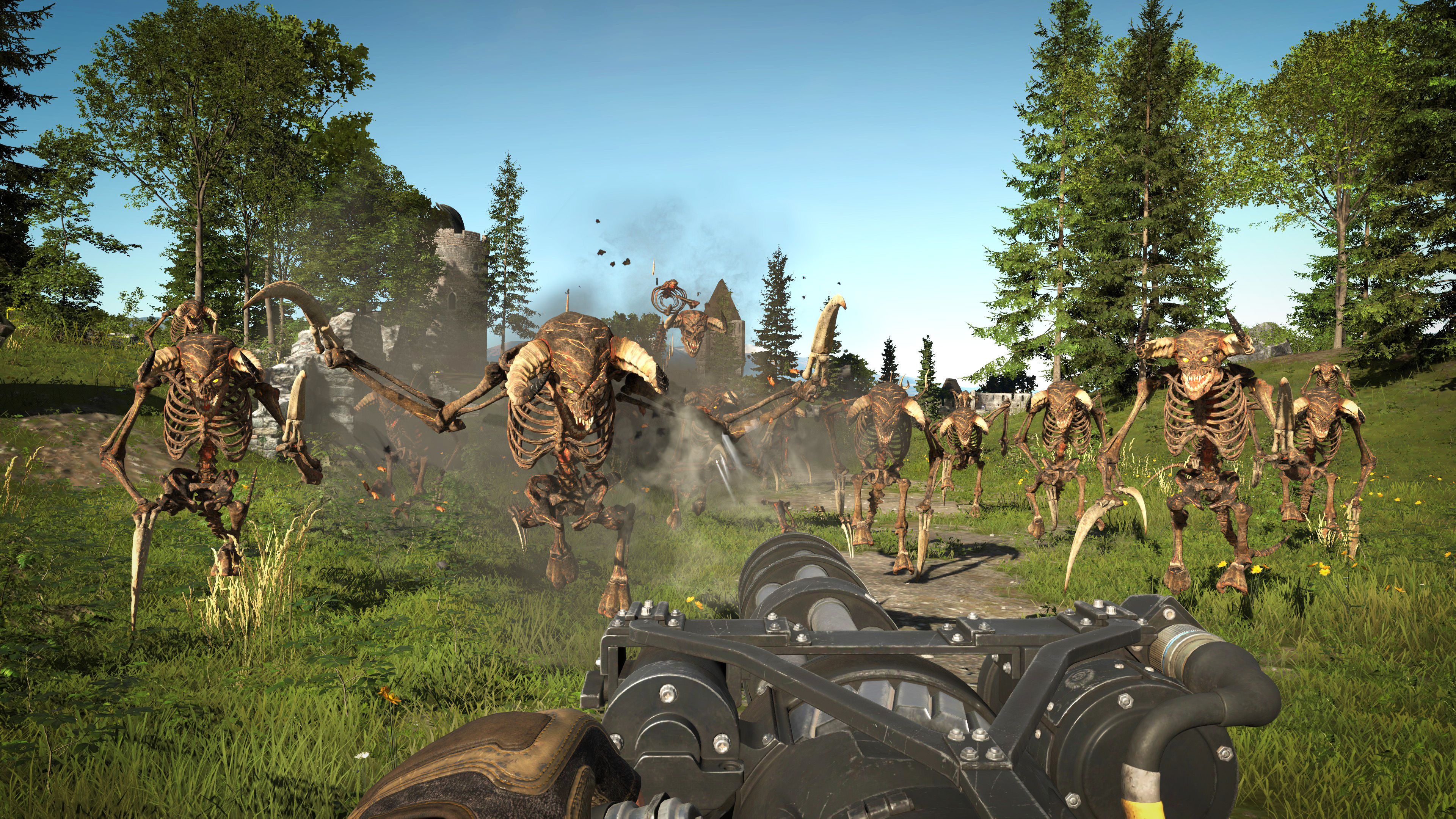 More in tone with something like Serious Sam 3, Serious Sam 4 features an actual story with cutscenes and even side quests. The main gist of the plot is that Sam and the Triple-A squad (obvious joke) are fighting against the invading forces of alien overlord Mental and his troops. After getting a tip that the Ark of the Covenant contains some deadly weapon capable of destroying those forces, the team heads to Rome to track down its location.

It’s a weird tone for a Serious Sam game and often veers into awkward teenage comedy. There’s a bit where Sam is getting hit on by some woman and it feels like rejected lines from an American Pie sequel. It doesn’t help that most of the characters have little in the way of definable personalities, though a few jokes at least garner a laugh.

Thankfully, you can skip every cutscene and it’s not like knowing the plot would help. It’s mostly a series of MacGuffins and generic twists that exist to get Sam from point A to point B. There’s a lot that could have been done to better things, but it’s almost irrelevant. 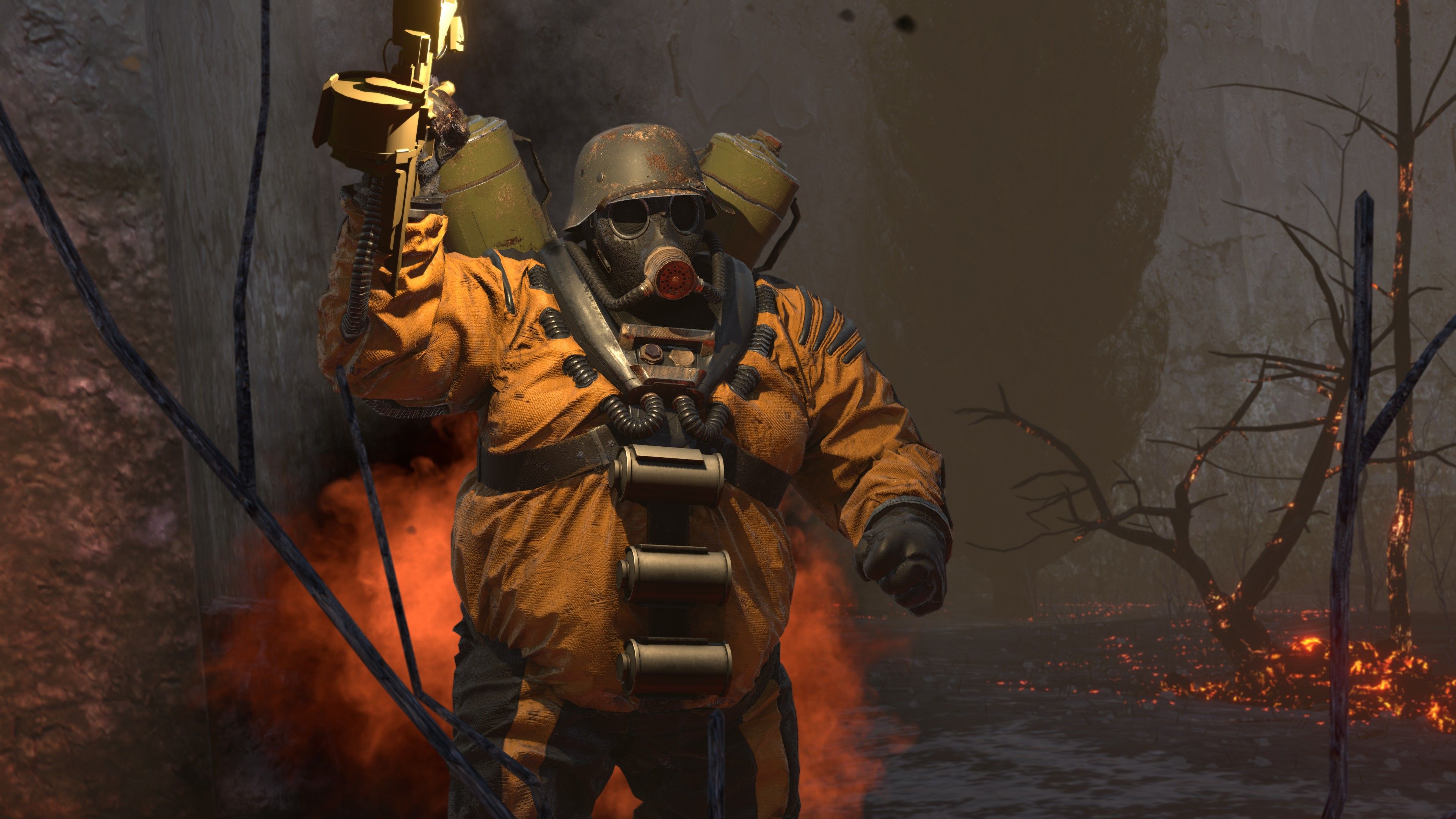 Another thing that is irrelevant is the much-touted “Legion System.” Before release, developer Croteam stated that this enemy generation system would allow for upwards of 10,000 foes on-screen at once. This happens exactly once during the roughly 10-hour campaign. It’s at the final battle (which also serves as the opening segment) and it’s mostly an optical illusion. Enemies will be “shooting” at you, but you can’t retaliate as their models don’t actually exist in the game world.

It creates a thrilling spectacle to cap things off, but the rest of the campaign is littered with levels that could have been ripped out of any other Serious Sam title. The visual design is inspired a lot by The Talos Principle, but unlike the careful design there, Serious Sam 4 feels almost randomly generated. Enemies types aren’t mixed up all that often and the basic flow of combat is often uneven during more hectic battles.

At least with regards to how guns feel, Serious Sam 4 has great weapons. The included arsenal doesn’t break any new ground for the series, but everything handles well. I’m particularly fond of the Devastator, something of a sniper grenade launcher that can explode enemies from afar. The gore system helps make your weapons feel meaty as even your pistol can decapitate foes. 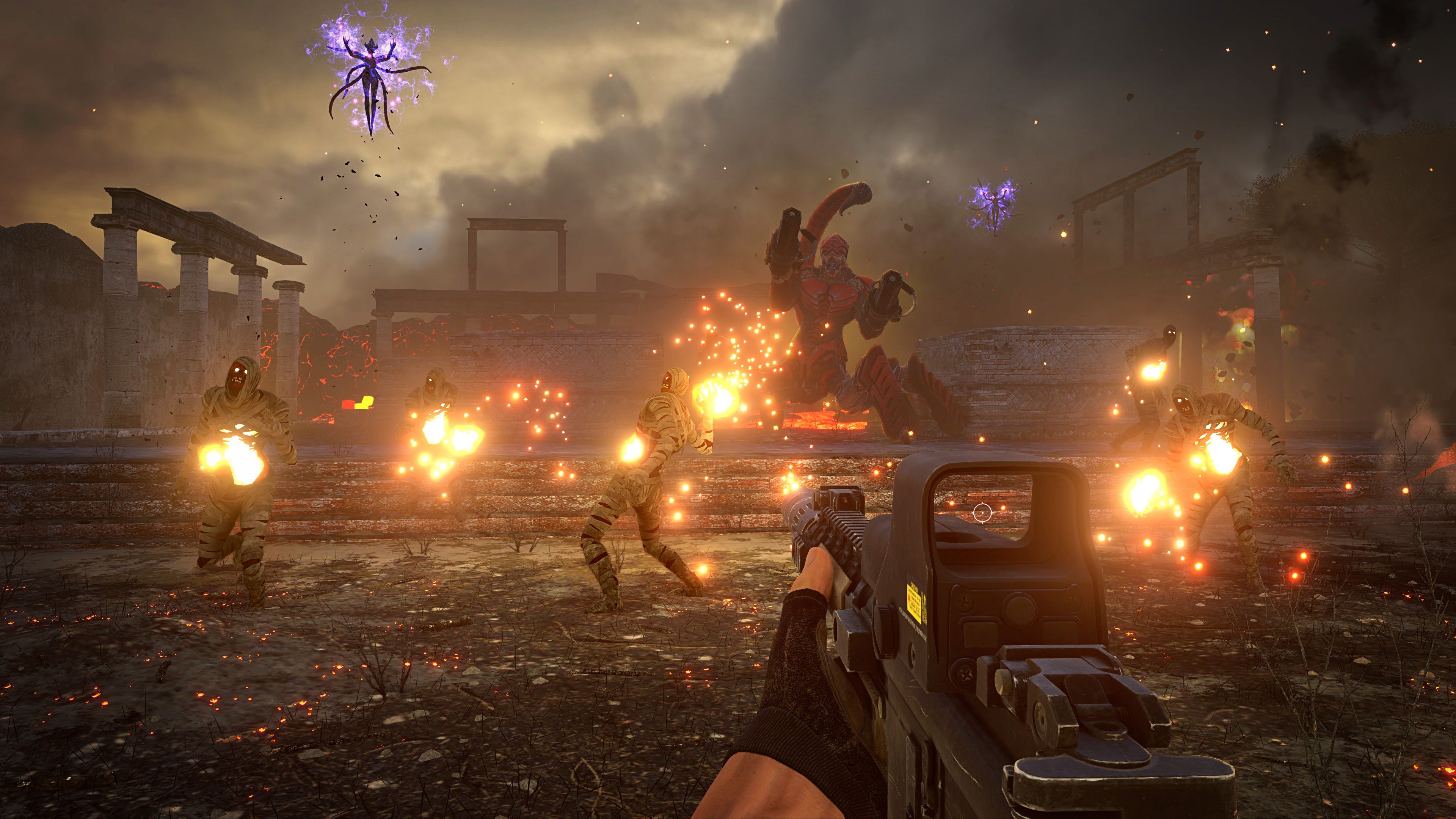 Sadly, some weird skill point system locks out basic abilities Sam has always had in the past. From the get-go, you cannot sprint and fire your gun or reload. It takes something like three upgrades to get that and they are spaced out pretty far. It drags the pacing down during bigger fights. You’ll often be running around in circles to get away from foes while unable to retaliate. That is when the enemy AI is functioning properly.

The AI also has some serious pathfinding issues. They tend to get stuck on objects on their path towards you. Even in infamous kamikaze guys will run away from you instead of at you. It doesn’t help that the often generic scenery masks foes, making it difficult to discern them at a distance. Couple that with Sam’s default speed being kind of slow, and it mostly feels like one step forward, several steps back.

Thankfully, the general pacing of the first half of the game is pretty good. You’ll be zipping through levels up to the excellent “Machina ex Deus” that features the Popemobile. Some new enemies also mix early encounters up, but the game just falls apart in the back half. It’s not overly long at 10-hours, but you get the sense that Croteam rushed the game out. 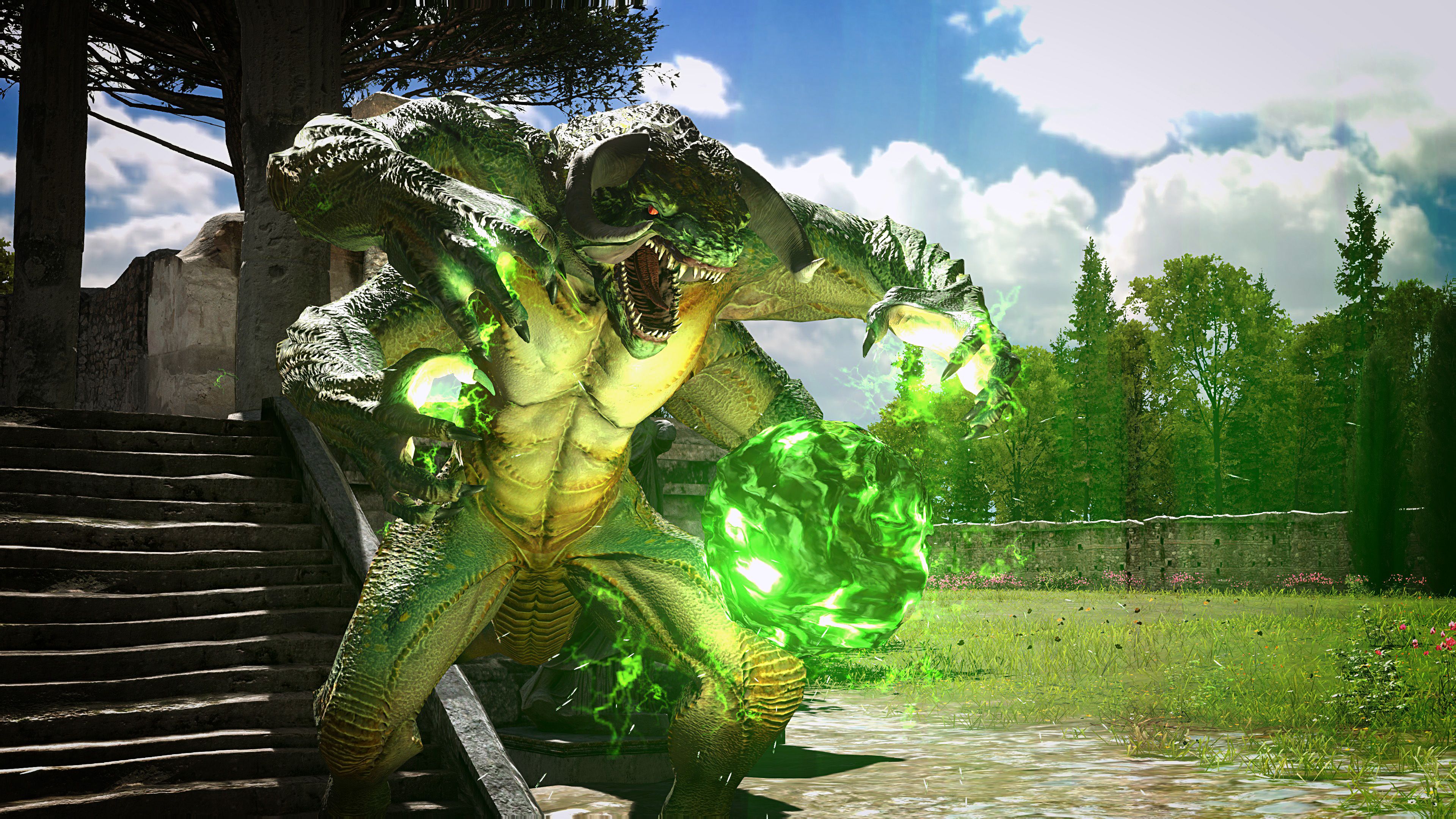 Rushed is basically the best way to sum up Serious Sam 4. In development for around eight years, I imagine the current global pandemic played a big role in how scattershot everything is. At its core, the weapon feel and early level designs aren’t bad. There’s a solid game buried under these weird choices, but Croteam seems to have shoved it out the door with little finesse.

One day, Serious Sam 4 might be a pretty solid little get. As it stands, I can’t see this fourth iteration leading to anything better.

A PC copy of Serious Sam 4 was provided to TheGamer for this review. Serious Sam 4 is available on PC and Stadia and will be releasing on PS4 and Xbox One in 2021.

Granblue Fantasy: Versus Adds Yuel To Its Second Character Pass

Do you need a PCIe 4 SSD for gaming? | Ask an expert

Warzone: How To Unlock The Pumpkin Punisher
We and our partners use cookies on this site to improve our service, perform analytics, personalize advertising, measure advertising performance, and remember website preferences.Ok