Sea of Thieves is more than just a game about big boats. As the Captain Jack Sparrow quote above says, Rare’s Xbox and PC exclusive is a game about freedom – the ocean lapping at your ship’s keel, the violence of the tide bashing your hull, the patter of rain on your deck, and the wind in your sails. It’s the promise of possibilities. Sea of Thieves is a captain’s logbook waiting to be filled in – your ship is your quill and the ocean your parchment.

Some of my fondest memories in Sea of Thieves are based around everything going wrong. That time I blew myself up by carrying a key that also happened to be a powder keg through a corridor of swinging blades and spike traps. The time my crew and I were taken down in a storm but managed to load a good portion of the treasure into a rowboat before manually navigating the furious waves to reach an outpost where we turned our haul in. If you want to have an experience, there’s no better game you can play with friends right now. But there’s always been a bit of friction if you want a more guided adventure.

If you’ve played the Tall Tales – Sea of Thieves’ story content – you’ll know my pain. Sometimes, just finding where to even go to kick off these quests is a pain in the stern. I’ve often had to resort to Google to figure out where a quest giver is – “Sure, game, I’ll head to some random island and find a skeleton parrot, which is something I definitely could have done without the internet.” When you know the game and you realise what kind of fun can be had on its bouncing waves and sun-dappled islands, you begin to forgive its obtuseness. But it’s a harbour chain for landlubbers.

With Sea of Thieves’ upcoming free expansion, A Pirate’s Life, Rare wants to take players by the hand. The hand you’ll be holding belongs to Pirates of the Caribbean’s Jack Sparrow, who heard about a hidden land where the pirate life continues without harassment from the East India Trading Company. And so he sets sail beyond the veil that separates his world from Rare’s, emerging on the other side with Davy Jones in pursuit.

Like Sparrow, Disney saw similar promise in those same virtual seas. During E3 2019, Rare was showing its game off to media and other attendees when the leads got a request to meet with Disney representatives. 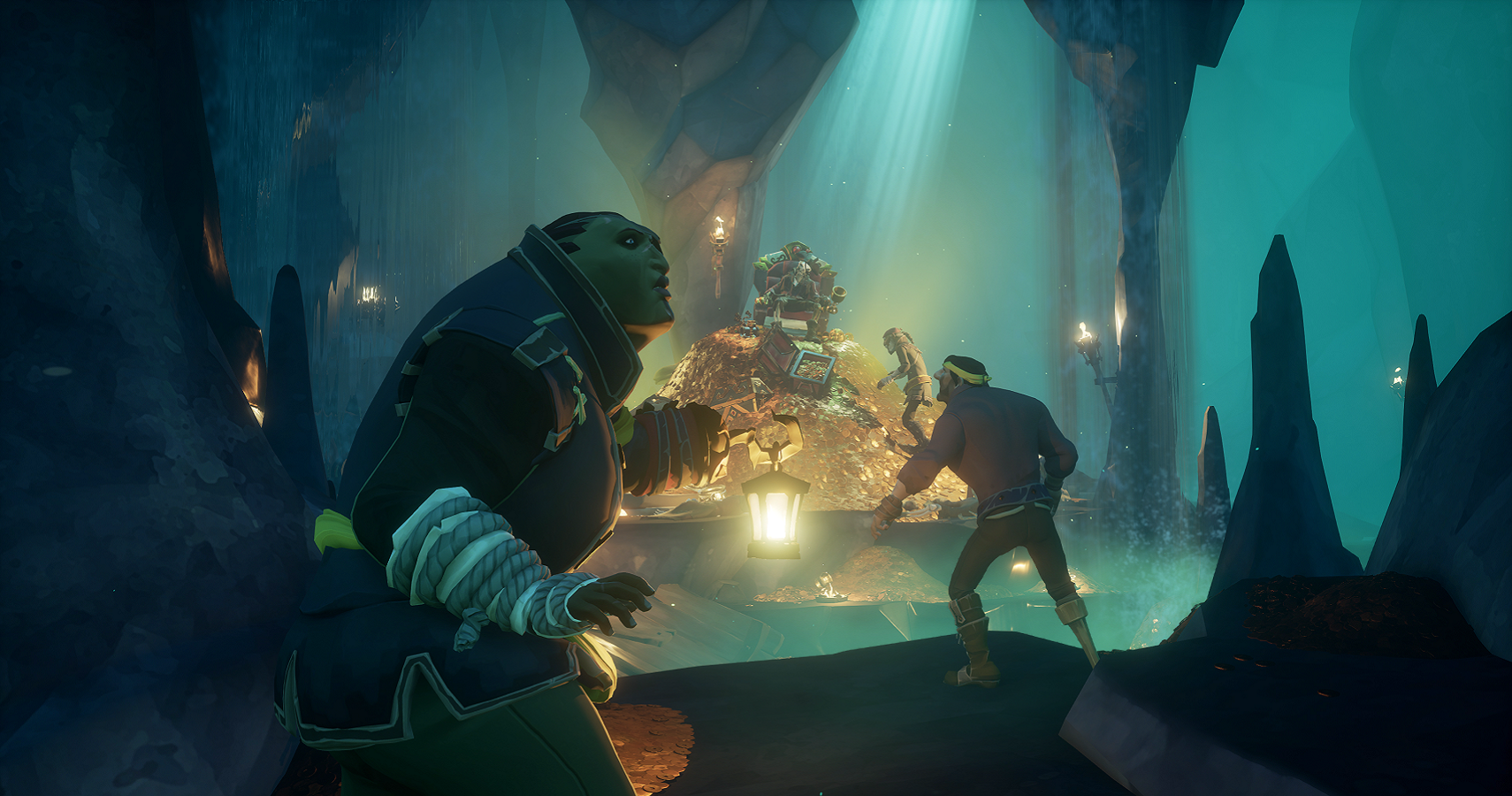 “Straight away, we bonded over that shared love of this game we created,” game director Mike Chapman explains. “They said, ‘We love your game, and we would love to make a Pirates of the Caribbean game, but you’ve already made it.’ They were keen to work with us. I left that meeting on cloud nine, to be honest.”

Rather than setting up a studio to make something to compete with Sea of Thieves, a collaboration between Rare and Disney was born. Disney was open to a partnership of any size, whether it be Pirates of the Caribbean cosmetics or something larger. Rare decided to shoot for the moon and blend the worlds together, though the expansion does feature a range of Pirates of the Caribbean-themed cosmetics for your ship, pets, and character, too.

A Pirate’s Life isn’t just throwaway side content – it’s a key part of the Sea of Thieves story. Rather than being locked off to seasoned players and pirate legends, you can jump straight into the expansion from day one. You won’t have to Google it, either. A Pirate’s Life is accessible from the game’s main menu when it launches on June 22, and you can also find the quest giver on the beach of every single outpost in the game. If you’ve been playing Sea of Thieves lately, you might have noticed building materials sitting on the sand – that’s where the Castaway will be. 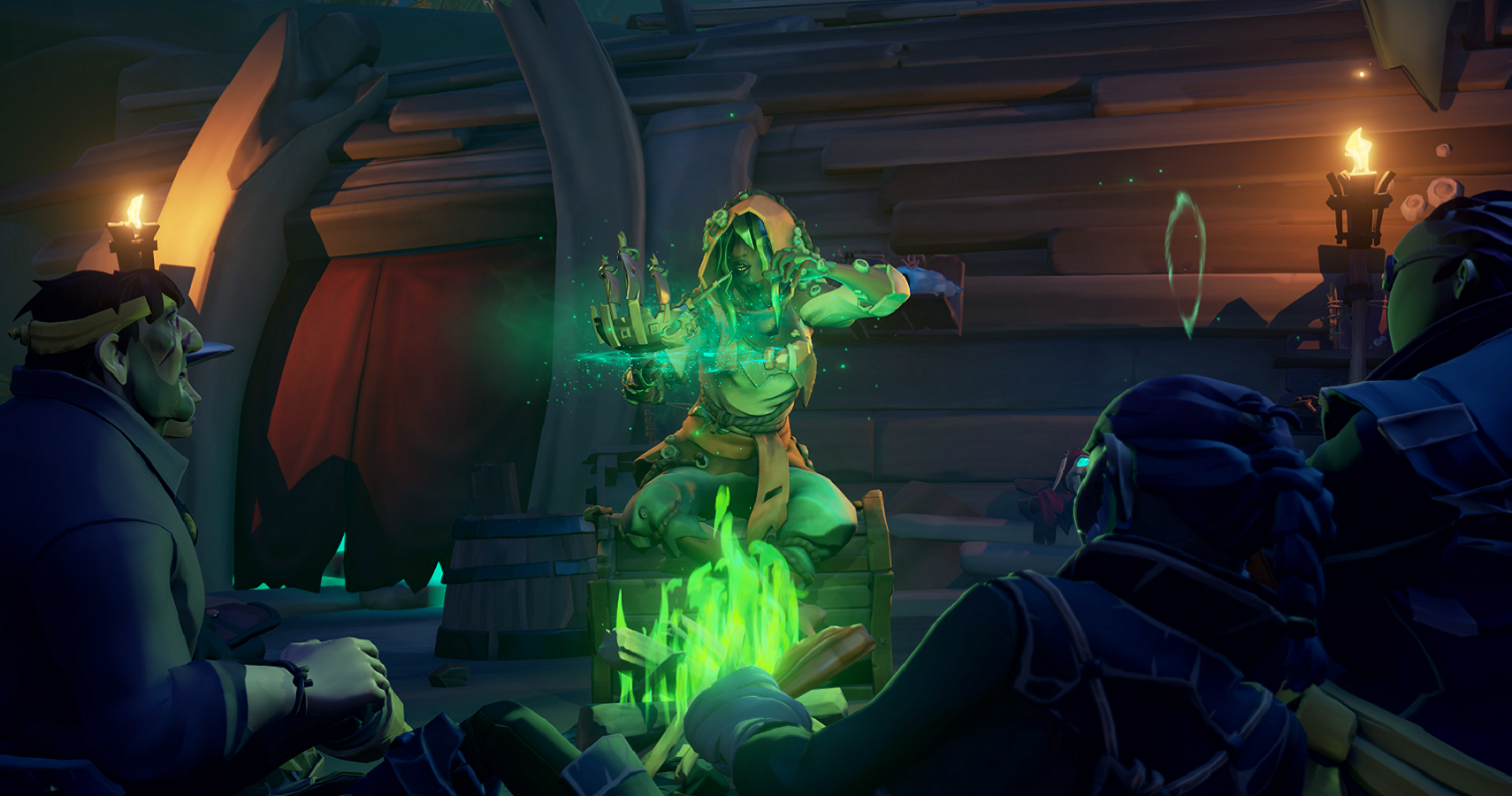 Once you get into it, you’re taken on five Tall Tales, complete with checkpoints so you can drop in and out before picking up where you left off if you get pulled away. You also get access to Jack Sparrow’s compass, which points to your heart’s desire, introducing a diegetic way to implement waypoints into a notoriously cryptic game. Once you’re playing A Pirate’s Life and exploring the new areas – the Sunken Kingdom and the Sea of the Damned – you’re also locked into an instance with your crew, meaning you can’t have your adventure ruined by some scurvy dogs with black sails and sweaty loadouts. You won’t even have to worry about sailing mishaps when travelling between objectives.

“Every Tall Tale in A Pirate’s Life introduces brand new locations to explore,” Chapman says. “So the sailing time between islands is not really a factor. And even the puzzle-solving – we use the quest book a lot in the first set of Tall Tales in terms of that kind of cerebral puzzle-solving, referring back to the book. [In A Pirate’s Life], the books are really there to give you additional lore and get you to start the adventure. The adventures feel much more immersive, much more cinematic, there’s much more [voice over] in there – it really is a reflection of how we’ve evolved this toolset.”

Some of the improvements implemented in the expansion will also make their way into the base game. Up until now, players have been fighting skeletons, but there are five new enemies coming to shake up the bones of the combat system. First up, there are the sirens – a new underwater enemy that attacks from 360 degrees, self-heals, and generally tries to ruin your day when you dive into the depths and follow the all-new oxygen pockets along the ocean floor. Next up, there are phantoms – ghostly pirates who are functionally similar to the classic skellies. And lastly, there are ocean crawlers, which are essentially three new crustacean-based creatures – lumbering crabs, burrowing hermits, and electrified attackers. 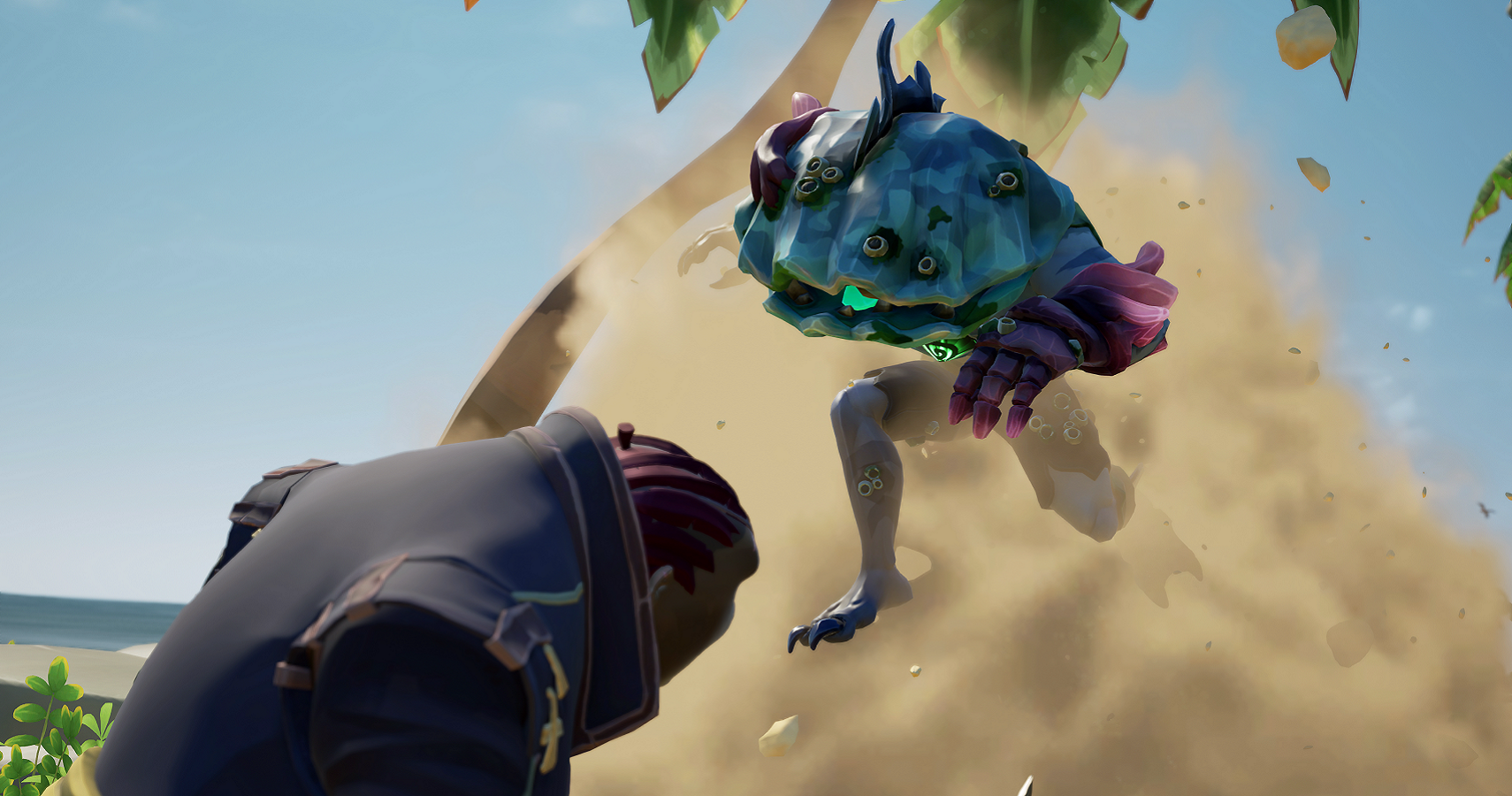 The ocean crawlers in particular look like an interesting addition, with many of them sporting abilities that do damage when you get in close. I couldn’t help but wonder whether that would be frustrating in a game where you have limited ammunition for ranged weapons.

“That has been a big focus,” Chapman says. “Because players can change their loadout, right? So they might have no ammo at all, they might just have a cutlass. Compared to the skeletons, they do have more abilities, but they’ve got counters. And there are ways where they’ll be stunned for a brief period of time. So you can essentially wait for them, dodge their projectile, then you can rush in with your sword. When you’re on the Tale, you can control a lot more, you can place ammo boxes more selectively, you can control the player’s experience, but we didn’t just want to have them in the Tales. We wanted to use the Tales to create lore reasons for why they were in the world – we wanted them to enrich the sandbox.”

That means there will be plenty of reasons to return to the base game when your adventures in A Pirate’s Life are over. But you should try the new expansion – from what I’ve seen, it’s a loving homage to Disney’s work, meticulously crafted to meld the two universes together in a truly authentic way. I’m not a huge fan of Pirates of the Caribbean, and I’ve never been to Disney World, but the passion and love this team has for the source material is infectious. I can’t wait to fully experience what they’ve done with it. 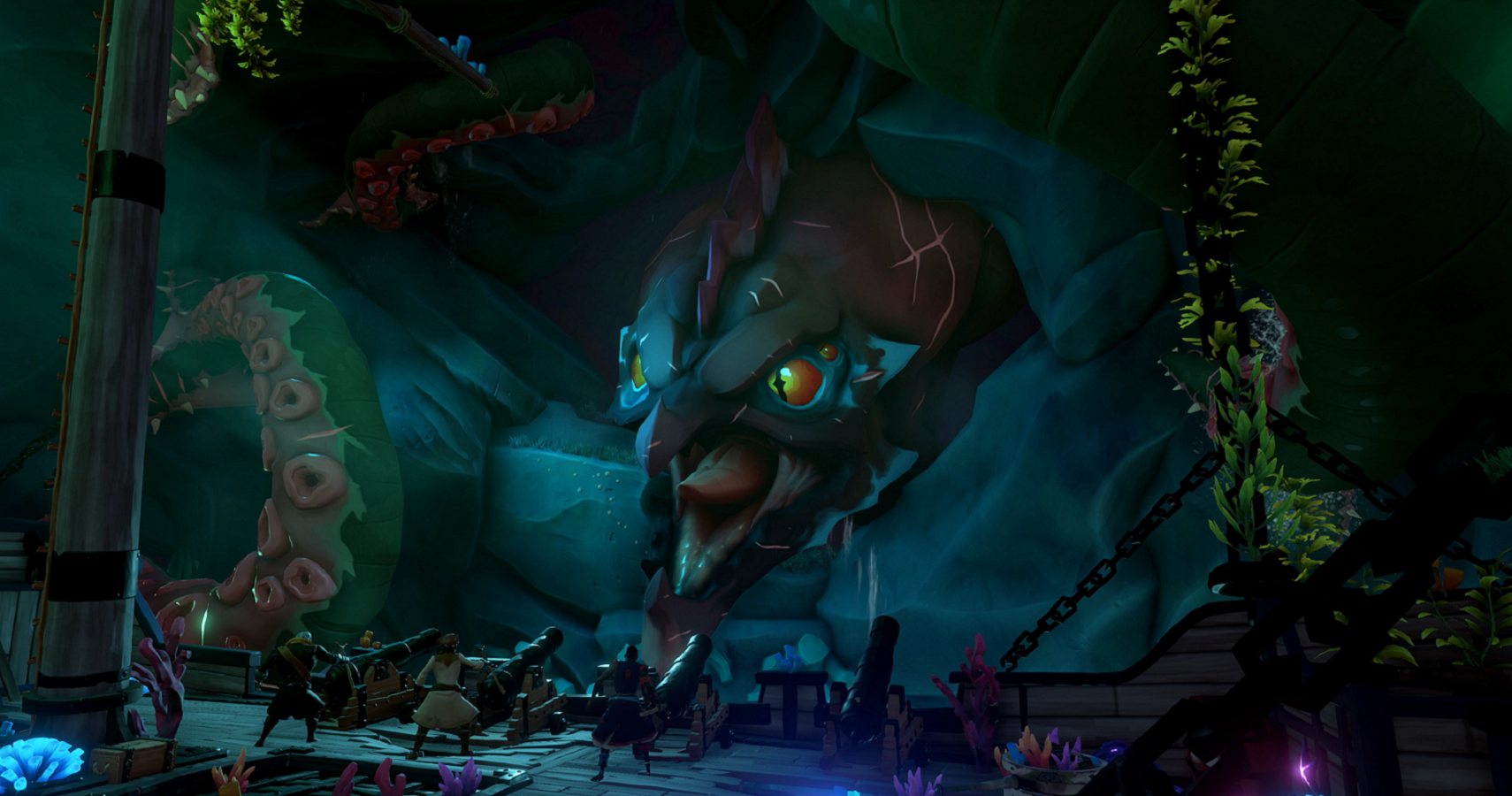 When you first enter the Sea of the Damned, you’ll find yourself caught in the memories of Jack Sparrow and Davy Jones, giving you the opportunity to explore a virtual reimagining of the 1970s Disney World attraction. “We had this great chance to work directly on scenes and depictions not just from the films, but also from the theme park ride,” lead designer Andy Preston explains. “Working and collaborating with Disney on the ride was just unbelievable, like trying to nail the lighting, the environment, the atmosphere, so that it feels almost like a director’s cut of the ride – almost like you’ve got this all-access pass to get out of the rowboat and go and explore by yourself or with your friends.”

The team even captured sounds from the ride and implemented them into the game, allowing them to tug on the nostalgia of those fortunate enough to experience it in real life. This comes through in the music, too, which boasts an original score, parts of the Pirates of the Caribbean soundtrack, and some blended mixes of Rare and Disney’s work together. Dive into the Sunken Kingdom – an underwater world awoken by Davy Jones – and swim among the sirens to hear a haunting siren’s song as you fight in the murky void.

“We’re introducing these world regions that were deliberately designed to look completely different to what you’ve seen before,” Chapman says. “The Sunken Kingdom, let’s push color even more, let’s put vibrance even more, let’s make it have a sense of verticality and the ability to change water dynamically. That’s all kinds of new systems that actively require engineers based on the design. There’s a lot more visuals to see without giving spoilers – a lot of NPCs and characters on the screen at the same time.” 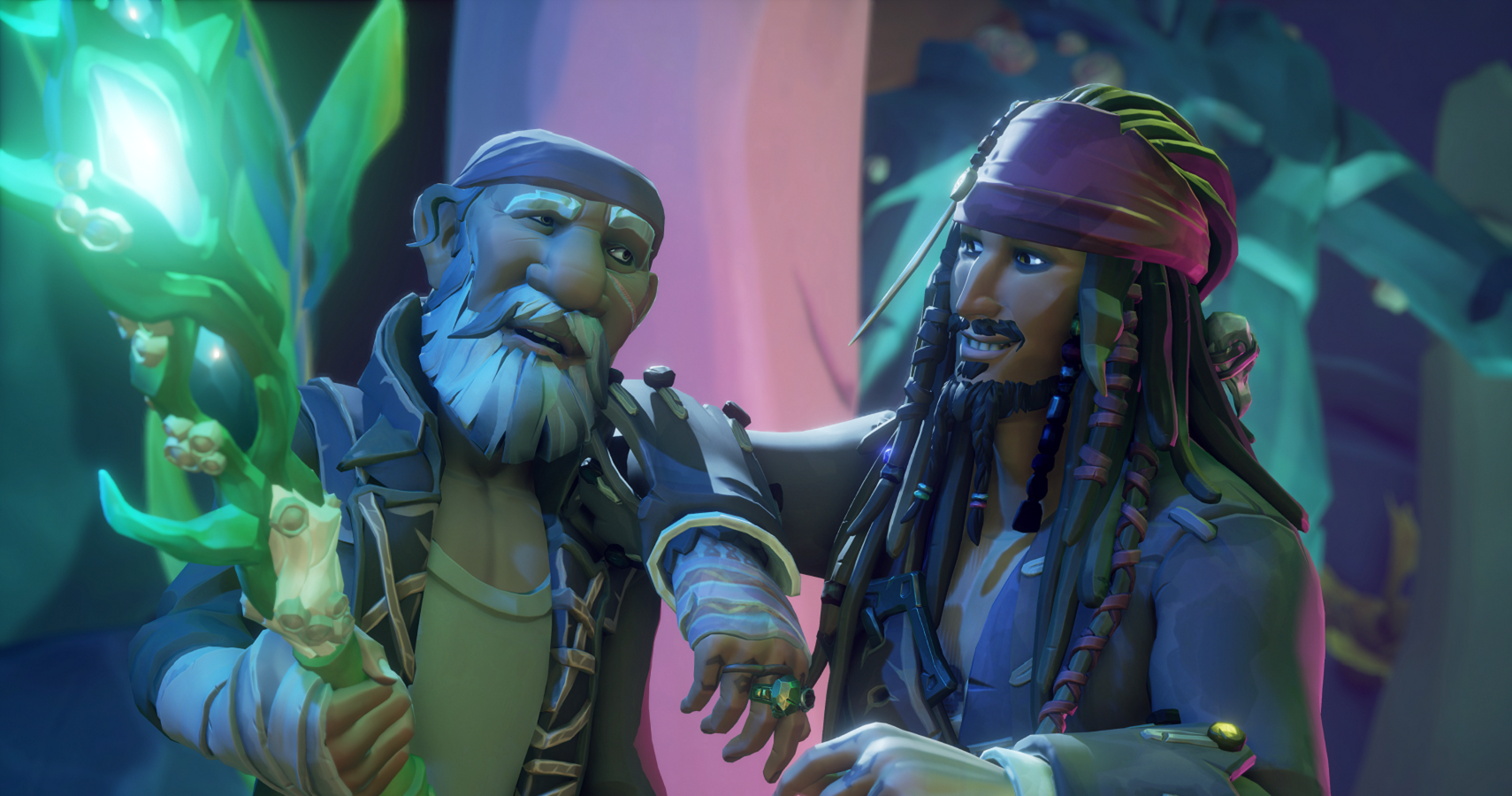 Rare has already confirmed you’ll be meeting characters such as Anamaria, Scrum, Gibbs, and other crew members of the Black Pearl along with Jack Sparrow. We’ve also seen footage of a battle against the Flying Dutchman, so it’s fair to expect some kind of epic showdown towards the climax – and I haven’t even mentioned the fight with a kraken where you actually see the beast’s head for the first time. He’s kind of cute. During all of this, Sparrow (played by Jared Butler) will be with you as an AI companion, which means you can play the expansion alone and still have a fighting chance. Pulling from his own infinite pool of cannonballs, he’ll take fire at your enemies and help out in a scrap.

If Sea of Thieves is Disney World itself – a place where you’re free to wander and discover thrills at your own pace – it looks like A Pirate’s Life could become its main attraction. It’s a more tailored experience that gives veterans something new while also onboarding new players instead of forcing them to dive headlong into the unknown. It looks truly authentic, but goes beyond fanservice – it’s more than just a keel and hull and a deck and sails, it’s the promise of a grand adventure waiting just beyond the horizon.