Sea of Thieves isn’t the same game that set sail a year ago. Developer Rare has remodeled this great ship. It’s greatly expanded upon things to do, targeting the game’s once great weakness: being torturously repetitive.

The recent anniversary update, which went live on April 30, is the most significant upgrade yet. It includes three core additions: Tall Tales, the Arena, and Hunter’s Call. Tall Tales are story-driven quests, the first of which is called Shores of Gold.

Each Tall Tale is composed of a series of quests linked together by the larger story. The individual quests are meant to be done in a single sitting. (If I quit the game mid-mission, I’ll lose my progress.) Depending on how I am at solving puzzles and navigating the inevitable player-versus-player battles, they’ll take anywhere from one to three hours. They’re designed to be playable alone, too—but I’ve quickly learned Sea of Thieves is better with friends.

Hunter’s Call adds cooking, hunting, fishing, and more wildlife. Additions like these inject a bit of depth into the spaces between Sea of Thieves’ more chaotic pirate moments.

Sea of Thieves has always felt like a sandbox, but now it feels more curated. Where I once had to find my own fun, now the game provides, at the very least, a metaphorical compass to point me in the right direction. Players who want the structure provided from campaign-like missions now have something to grab onto, along with little details like fishing to fill out the world. For players happy with the aimless voyages of the open seas, there’s no reason to stop that endless journey, either—the joy of wandering around from the original iteration is preserved in the update, just with even more to do.

By adding more elements of play, I can create the experience I want. To a point. There will always be other pirate players on the sea. 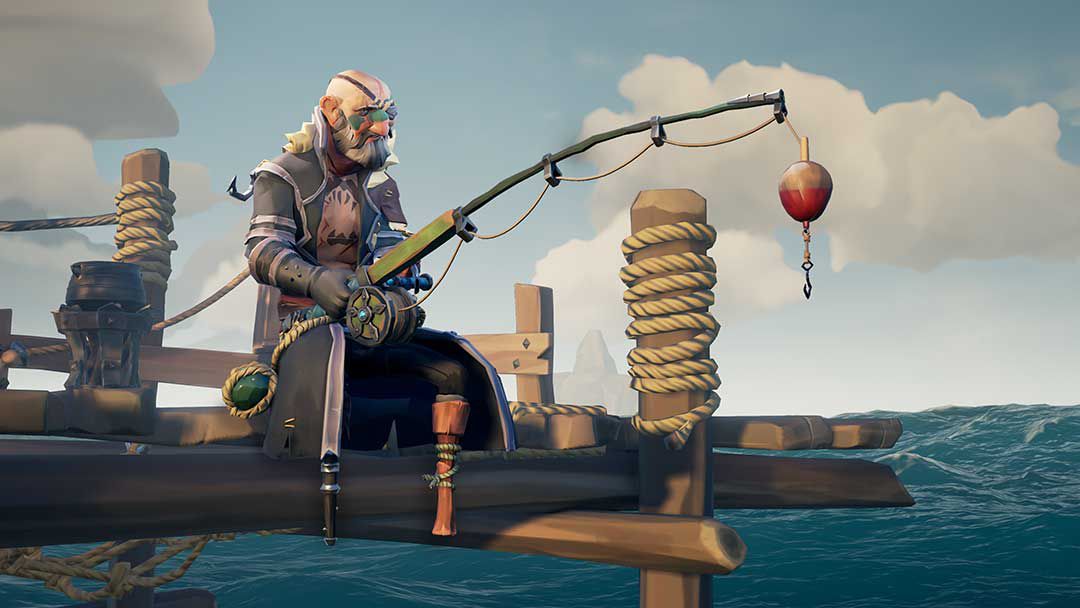 A pirate fishes in Sea of Thieves
Rare/Microsoft Studios

There’s still no right way to play. That’s both game’s strength and weakness.

Rare hasn’t provided many instruction or boundaries — and most goals and guidance is explained in-game on maps and books. It’s immersive, but it’s also perhaps a bit too ahead of its time. Sometimes I crave a simple sentence superimposed on the screen telling me what to do next.

If an experienced friend isn’t around, I often have to search Google tips. How does fishing work? How am I supposed to catch animals? What happens when you eat uncooked meat? (For the last one, I’ve learned, you throw up.)

Early in my adventure, I routinely had no clue where to go to complete quests. When I did reach my goal, I’d be overwhelmed by enemy cannons. Or I’d fall off my ship and be eaten by sharks.

Oftentimes, players would show me no mercy. One band of pirates sunk my boat for the thrill of it. Perhaps thwarted by my cries of “Stop! I’m weak!” over the mic, the players then left me alone on the next try.

Eventually, I completed the first part of a mission to find a skeleton key, and moved onto the next. But a different group of players boarded my ship while I was digging up the chest that the key unlocked and stole the key—ending the mission for me. 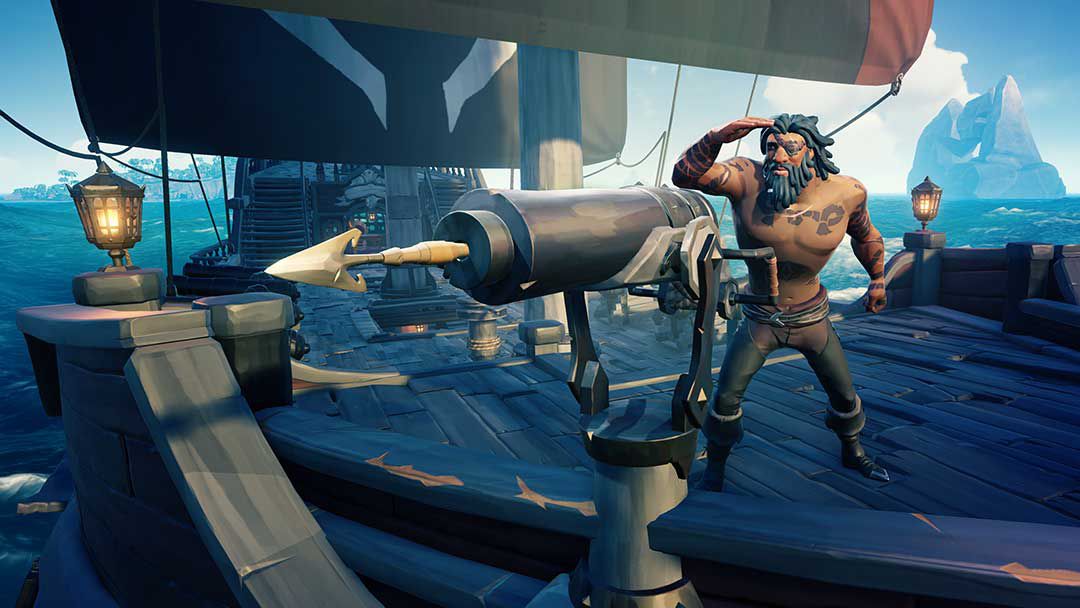 Gradually discovering how to play—moreover, how to play the version of Sea of Thieves that suits me—can be refreshingly loose and open-ended. But the earliest hours, when I’m struggling to learn the simplest mechanics, can be frustrating to the point of me quitting.

A couple times I’ve rage-quit, only to give it another go a few hours later. It feels good to complete a task, but I know it routinely comes down to luck. I just have to roll a server with players who aren’t interested in sinking my ship. Those are the limitations, of course, of a fully player-versus-player environment. There are no safe zones and everything’s always at risk, depending on whose spawned in your sea.

Playing passively puts you at risk of more aggressive pirates. Sitting at a dock to fish for a few hours or leaving your ship unattended is risky; it’s necessary to be on-the-lookout for hostile players and ready to fight when they show up. For new players, it’s near impossible to be prepared. You’ll learn—but it can be frustrating, especially when players are griefing or being particularly obnoxious, racist, or sexist. And it happens, with players conflating the nature of the game (fictional pirates!) with harassment (real assholes!). This friction can be, at its worst, one of the game’s biggest downfalls. 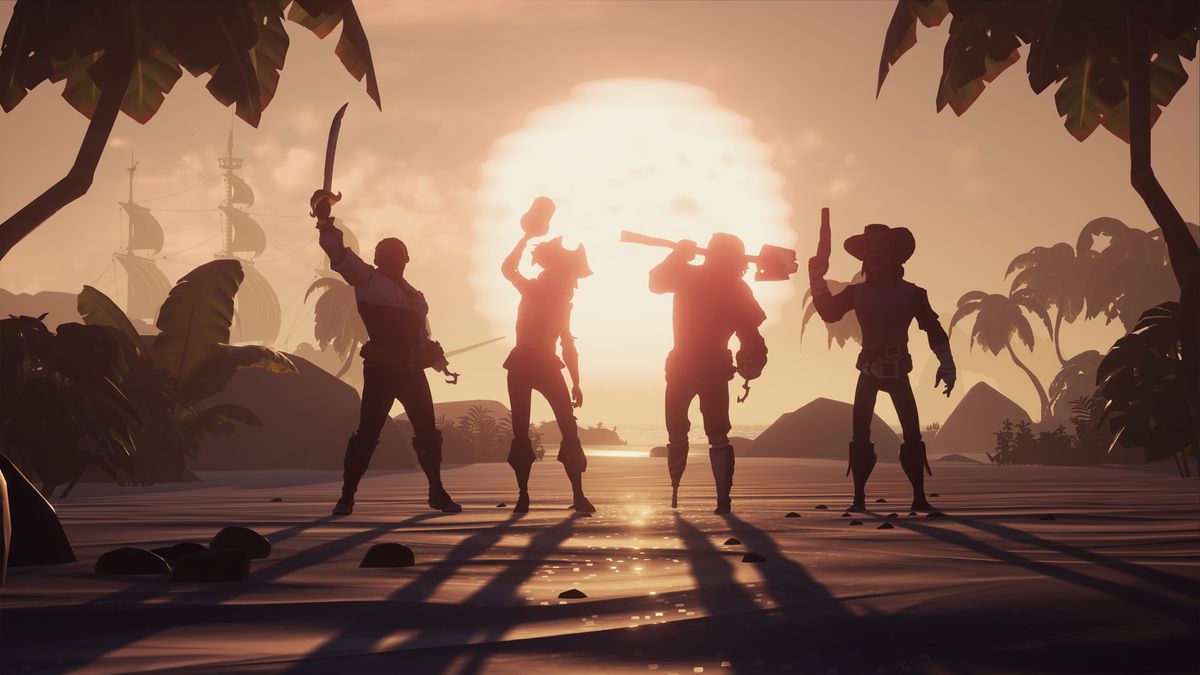 After a few days of playing solo, I found myself tied up with a group of pirates serving the golden arches. They call themselves the Clown Crew, a group of pirates, naturally, dressed up as Ronald McDonalds, sailing the ocean with a decked out red-and-yellow fleet. I joined the Clown Crew on the McFry, a medium-sized Brigantine that was serving up happy meals to the other players on the sea.

Generally, I don’t like playing the bad guy. I stopped my horse for every stranger in Red Dead Redemption 2. I felt bad when I accidentally chose a rude response in The Walking Dead. When I first started playing Sea of Thieves, I wanted everyone on the server to join in my sea of friends. That … didn’t happen. Other pirates took advantage of my kindness, pocketing my treasure, leaving me for dead. I joined up with the Clown Crew to seek out revenge. On anyone. Now I shoot cannons at other ships. I’ll steal treasure from a group of players when they’ve just finished raiding a fort. I have been hardened.

But we Clowns still maintain some sense of decency. If we come across a single player on a small ship, we didn’t shoot. We don’t take down the same people twice, unprompted.

The Clown Crew told me of a defining moment, when they approached a group of players that ended up being a dad and his kid daughter. Instead of stealing their loot, they helped them take down a fort and gave them their extra treasure. 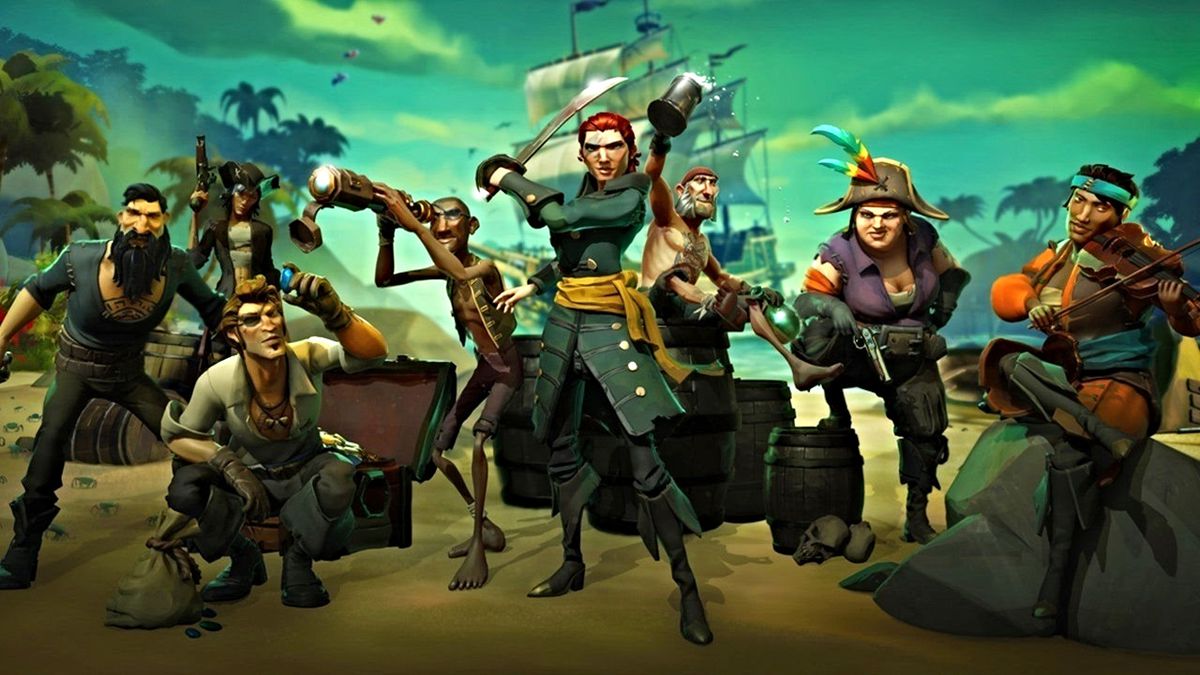 In Sea of Thieves, I have found a game that balances the usual hostility and violence of its contemporaries with an unusual proclivity for compassion. Which is to say, to succeed in this game, I’ve needed to make friends and foes. There’s certainly plenty of trolling and bad behavior on the seas, but it’s balanced by the camaraderie necessary for having a good time.

I’ve completed more of the quests, now, with different groups of players, and I’ve come to like the unpredictability of the servers. And I think that appeal directly relates to my experience level. I’m certainly no pirate legend, but at least I know how to steer a ship away from an enemy. (Or rely on players who can fight better than I can.) Once you get to a point where you can comprehend the basics, you can start to see a metagame forming within each server. It’s a shame, though, that because of the barriers of entry into Sea of Thieves a lot of folks seem to have given up before getting there. Sea of Thieves doesn’t need to hold your hand, but its loyalty to its “simple” design—even after all these updates —can sometimes be to a fault.

In their book, Metagaming, Stephanie Boluk and Patrick Lemieux write that metagames exists alongside games, “transform[ing] video games from a mass medium and cultural commodity into instruments, equipment, tools, and toys for playing, competing, spectating, cheating, trading, making, breaking, and ultimately intervening in the sensory and political economies of those technologies responsible for the privatization of play.” In short, the metagame is what happens outside of the numbers and code of its creation. 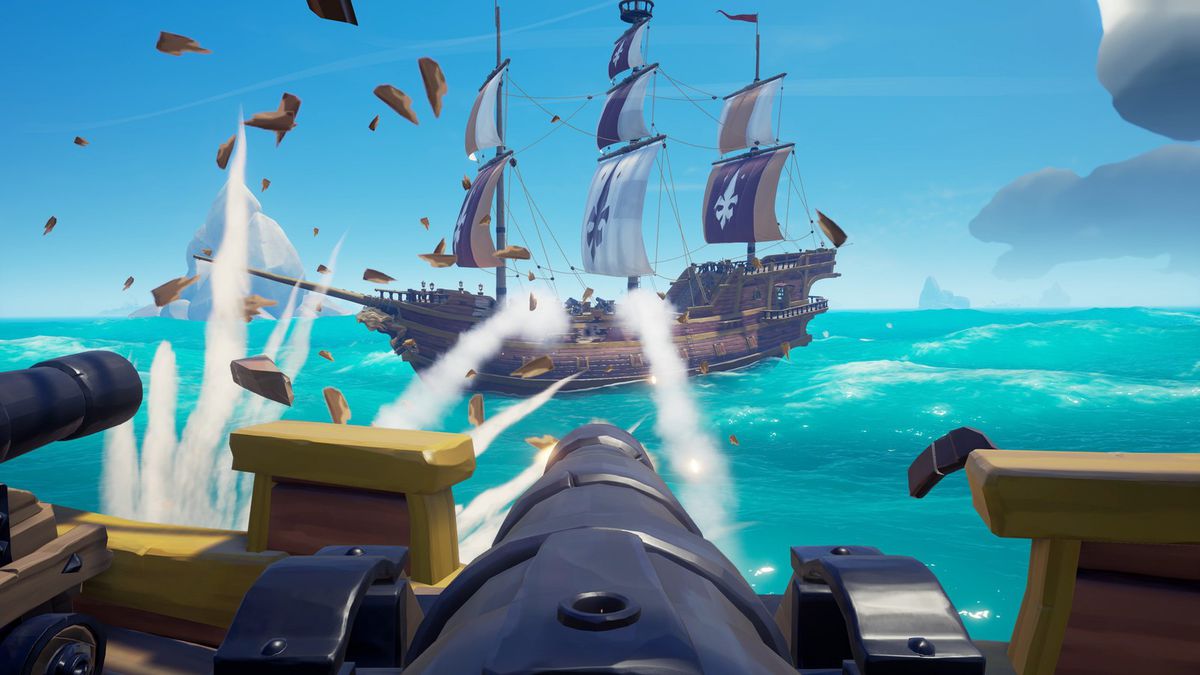 Oftentimes, metagames become popular and appear to overwhelm a game, like in Overwatch. One meta becomes popular due to hero balance changes and adjustments. A mass of players discovers that these group of heroes are the most popular combination available, and then people stick to it until more changes happen. It’s different in Sea of Thieves because of the game’s random elements and variation in play. Metagames form around individual servers as players figure out who they’re playing with. Sometimes, the metagame is just ignoring each other. Other times, it’s more complex. Playing with the Clown Crew, I quickly realized the complexity of playing as a pirate. The way we were to play Sea of Thieves changes according to our actions and other players. If you’re to steal hard-earned treasure from another group of players and then sink their ship, you’ve got to play differently after that. The other group’s game shifts, too; they may now be out for revenge. They may not. And the uncertainty of that will impact how you proceed for the rest of the session.

These metagame economies go even further in Sea of Thieves’ new competitive mode, Arena. The Arena is explicitly for player-versus-player battle. Crews of four are pit up against each other for 24 minutes, and the objective is to get the most silver. There are many ways to get silver—finding and selling chests, killing enemies, and sinking ships. (Having your ship sunk decreases the amount of silver you have.) Games within the game are unraveled inside the 24-minute period of play as ships battle up against random elements, player skill, and strategy. 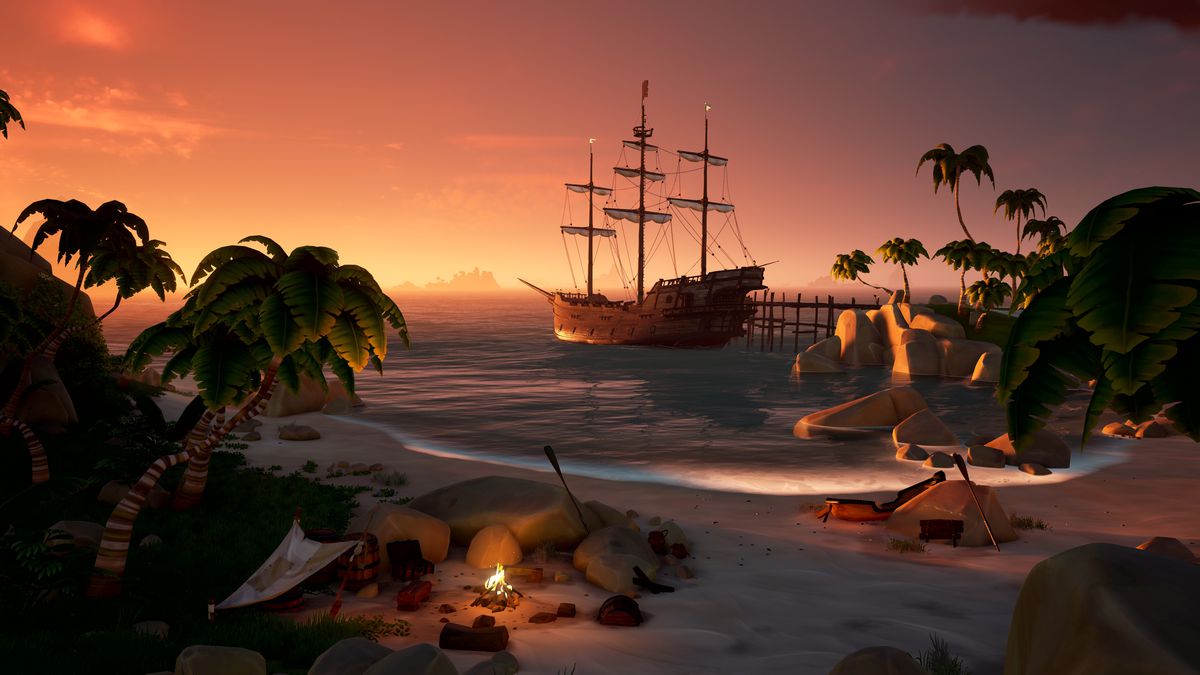 Strategy changes as time passes. You’ll play differently in the early game than in the middle or late game, much like League of Legends. If you’re in the lead, holding your position becomes more important. And if you’re last, taking risks you otherwise wouldn’t take is essential. What’s exciting about Sea of Thieves’ Arena is that these random elements make it possible for anyone to win—skill isimportant, but it’s crew synergy that really makes a difference. You can’t depend on having only players that have good aim; instead, you need players who can lead and take commands. There’s a delicate balance between seeking out treasure and battling other ships, and plenty of ways to find that balance.

Sea of Thieves excels more as a social platform than purely a game, kind of like Fortnite. Whereas other games rely on the action of gameplay to keep players engaged, Sea of Thieves hinges on its community. Each sea is unique—no experience has ever been entirely similar, depending on what thieves have spawned with me, or what treasure has popped up where. Sometimes, the metagame of a particular server is frustrating, overwhelming, and demoralizing. Other times, there are clowns.

A year later, Sea of Thieves is different every time I play. In that way, it’s unlike anything else — including its former self.