Sayonara Wild Hearts doesn’t waste any time getting the player into its gorgeous, techno-pop-driven dreamscape.

According to the voice over (performed by Queen Latifah, would you believe it?), you must chase the tarot deck through obstacle-laden tracks, riding everything from a skateboard to a high-jumping deer and guiding them left and right across a twisting, humming path. Occasionally, you deliver a flurry of timed punches against fabulously posed enemies by tapping buttons in time with the music. It’s all much more style than substance, but it’s hard to fault the game when that style is this damned good.

Every moment in the game is an aesthetic delicacy. The animations are smooth and satisfying, like when you twist in mid-air after collecting a high-value heart, or balance like a ballerina on your scooter seat when it’s time to confront the boss — which may or may not be a mechanized wolf with three heads.

The color range is drawn straight from the bisexual lighting palette, jewel-tones accented with neon UI elements. The tarot cards are all stylish ladies leading girl gangs, wearing cunning suits and letterman jackets. Given that you alternate between fighting and kissing these ladies, it’s refreshing to see a game embracing a queer aesthetic so wholeheartedly and wholesomely. This is a world where everyone is graceful, strong, and wants to kiss everyone else. It’s a good place to spend some time.

The other highlight of the game is the soundtrack. Sayonara Wild Hearts is basically Give Carly Rae Jepsen a Sword: the Game, so it’s no surprise that the chiptune-influenced audioscape is entirely on-point. The bubbly indie-pop tracks heighten the overall feeling of playing through an animated music video. Like so many psychedelic gaming experiences before it, Sayonara Wild Hearts feels like a dream you can play through as often as you’d like, and all in a single sitting, if you get as lost in the songs as I did. You can stream the soundtrack right now if you’d like to give it a try.

Sayonara Wild Hearts plays more like a mobile game, for better or worse, no matter which system you play it on. The gameplay is simple enough that it can easily be played with an idle thumb while standing on a bus. Some levels ask for more concentration than others, such as a particularly tricky section where you have to hit pinball-style bumpers to nail tight turns. But each level has multiple checkpoints, so failing doesn’t mean restarting the whole track. 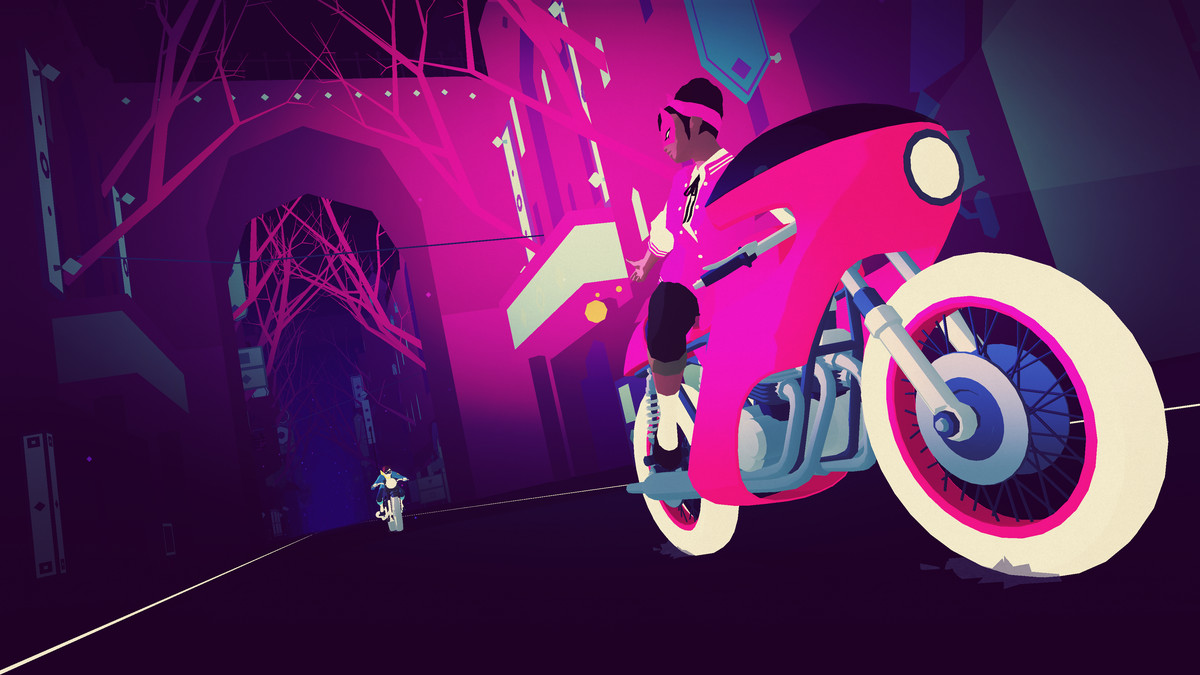 But I wouldn’t call Sayonara Wild Hearts a rhythm game. Although there is some sync-up between the music and the sound effects of gathering hearts – did I mention the point system is hearts made of beautiful light? – success in the game isn’t reliant on hitting the beats. Even the quick-time events are very forgiving, as they are more like take-your-time events. Failing too often leads to a screen on which you’re offered the opportunity to skip that song entirely. Nothing is being kept, or gated, from the player.

It’s an open spectrum of light and sound, all here for you to enjoy. Think of the game more like a playable soundtrack, an interactive version of lo-fi anime beats, to be enjoyed, but not struggled through.

Although the game is easy to cruise through, it takes much more effort to gold-rank the songs. I beat the game quickly, in under two hours, and immediately started replaying it, just like I do when I find a new album to obsess over.

The allure of the music does a lot to incentivize a relaxing second or third run through, whether you’re going for the gold or not. Sayonara Wild Hearts feels like the perfect game to relax to just before going to bed, with hopes of washing my dreams with the pink-purple colors of a neon sunset, surrounded by beautiful people who fight as if they’re falling in love.

Sayonara Wild Hearts is now available on iOS, Nintendo Switch, and PlayStation 4. The game was reviewed on Nintendo Switch, using a copy purchased by Polygon. You can find additional information about Polygon’s ethics policy here.