Farming and crafting games have never really been my cup of tea. I’m either all-in on those types of games, unhealthily dedicating every waking moment tending to them (and my virtual farm), or bored to tears over the monotonous and mechanically granular gameplay that’s required to succeed. So, then, why would I be drawn to Sakuna: Of Rice and Ruin – a rice farming game that describes itself as being “an ode to the artistry of cultivating rice, and an engrossing simulation of the craft behind the agriculture”? 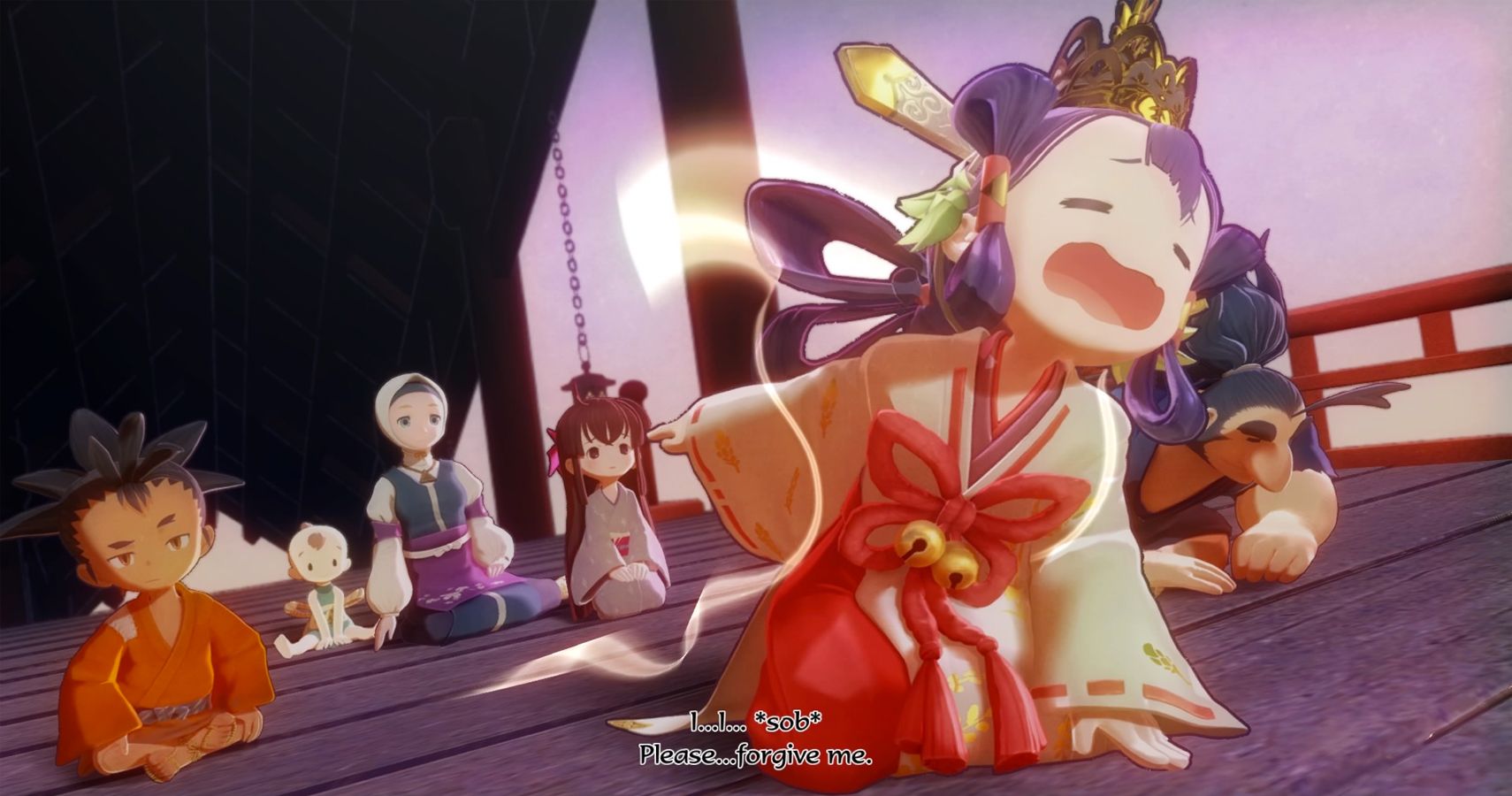 It doesn’t take long for Sakuna: Of Rice and Ruin to get going. A ragtag group of humans somehow manage to find themselves on a Bridge that connects the human world with the Lofty Realm – the world of the Gods. Sakuna, a bratty, spoiled harvesting goddess, accidentally leads them into the realm, resulting in her and the group of misfits being banished to an island overrun with demons. Sakuna, armed with her weapon and fighting skills, is left responsible for leading her newfound “family” and taming the island of its demons, all while cultivating rice on the group’s humble plot of land.

The narrative, overall, isn’t anything groundbreaking, with personalities that fit each character to a tee (along with each one’s progression over the course of the game). That’s not really important, though, because from a storytelling perspective, Sakuna: Of Rice and Ruin might be one of the most genuine and endearing in-game experiences I’ve had in a long time. 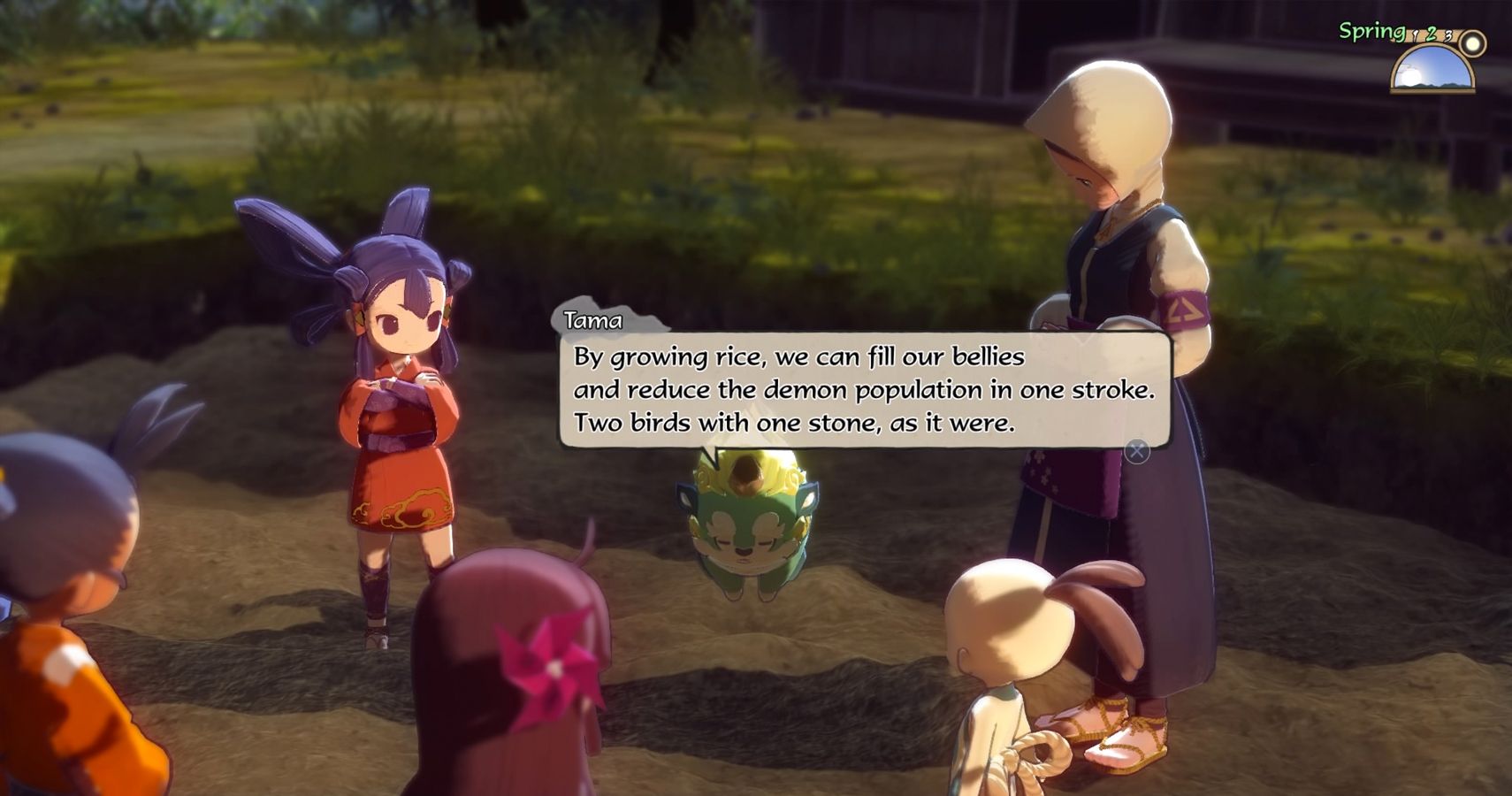 Sure, there is combat, and I’ll touch on that later, but nearly everything about Sakuna: Of Rice and Ruin exudes a cozy, unassuming, and warm experience.

I’m genuinely interested in having conversations with each member of my party – which are brilliantly voice acted in both English or Japanese – learning about them, as well as the value that each one brings to the table for the group’s benefit.

Speaking of table, that’s where many of the best conversations occur: while the group is chowing down on a family-style meal and sharing stories by the hearth. Although I suffer greatly from misophonia and the chewing and slurping sounds get to me more than they should, these intimate moments are effective in making me feel like I’m sitting at the table alongside the crew. 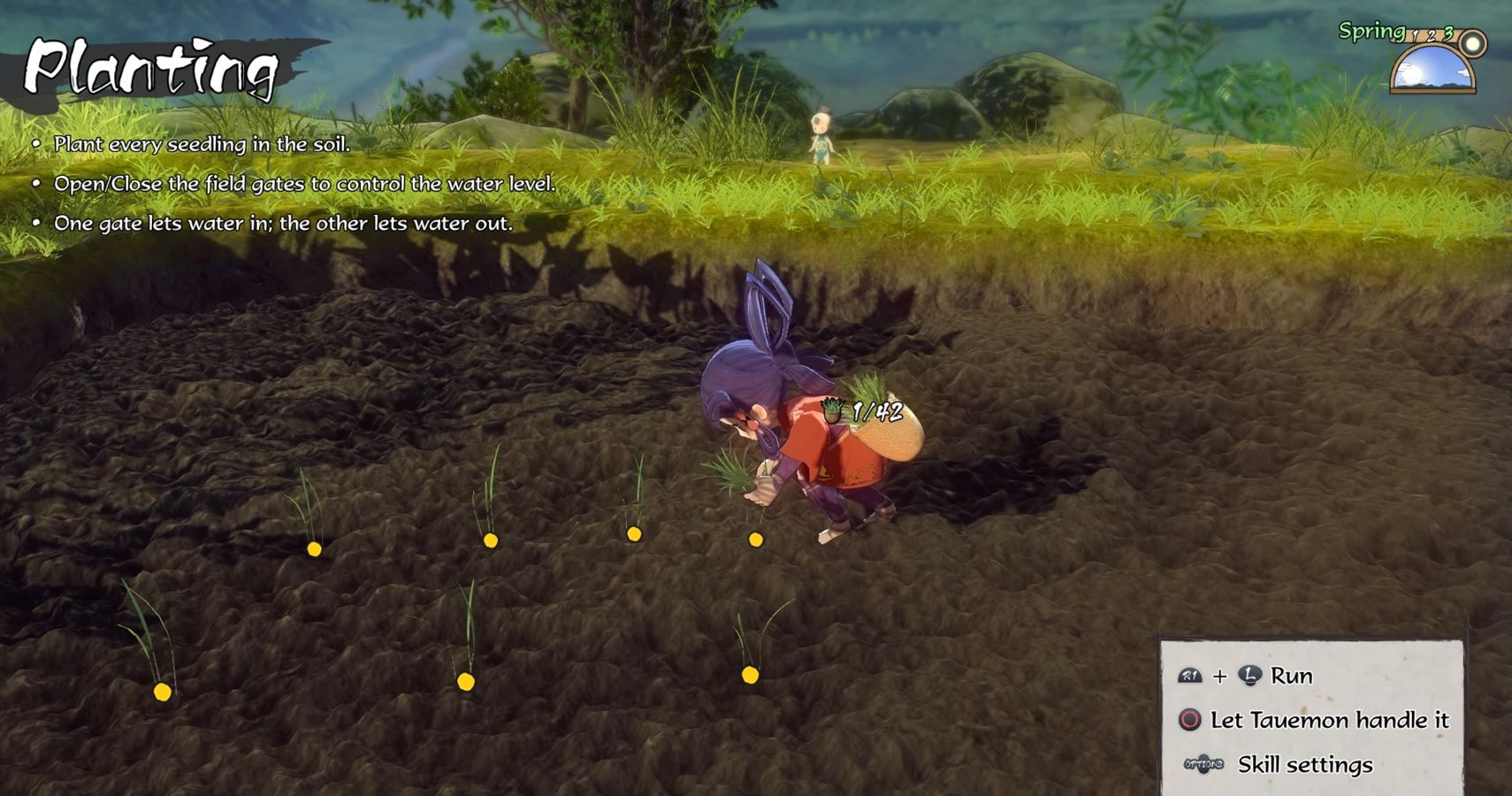 And where does all of this food come from? The island, of course. When not spending time at home, you’ll be exploring the island to gather resources to improve your camp while defeating the demons that plague the land. These levels are purely based in combat and resource gathering, featuring a 2.5D side-scrolling perspective.

Against the incredible backdrop of each level, I’m reminded of the Trine series as I utilize well-executed platforming mechanics to make my way through each area, clearing out all of the enemies in – more often than not – a chaotic swirl of combos and special attacks. Control-wise, all of the combat feels great, whether I’m taking on groups of demon rabbits and flying fish or the game’s various bosses. Sakuna’s scarf elevates combat (and the platforming in general), allowing her to slingshot her way around the battlefield or snag enemies mid-air. Just your friendly neighborhood harvest goddess. 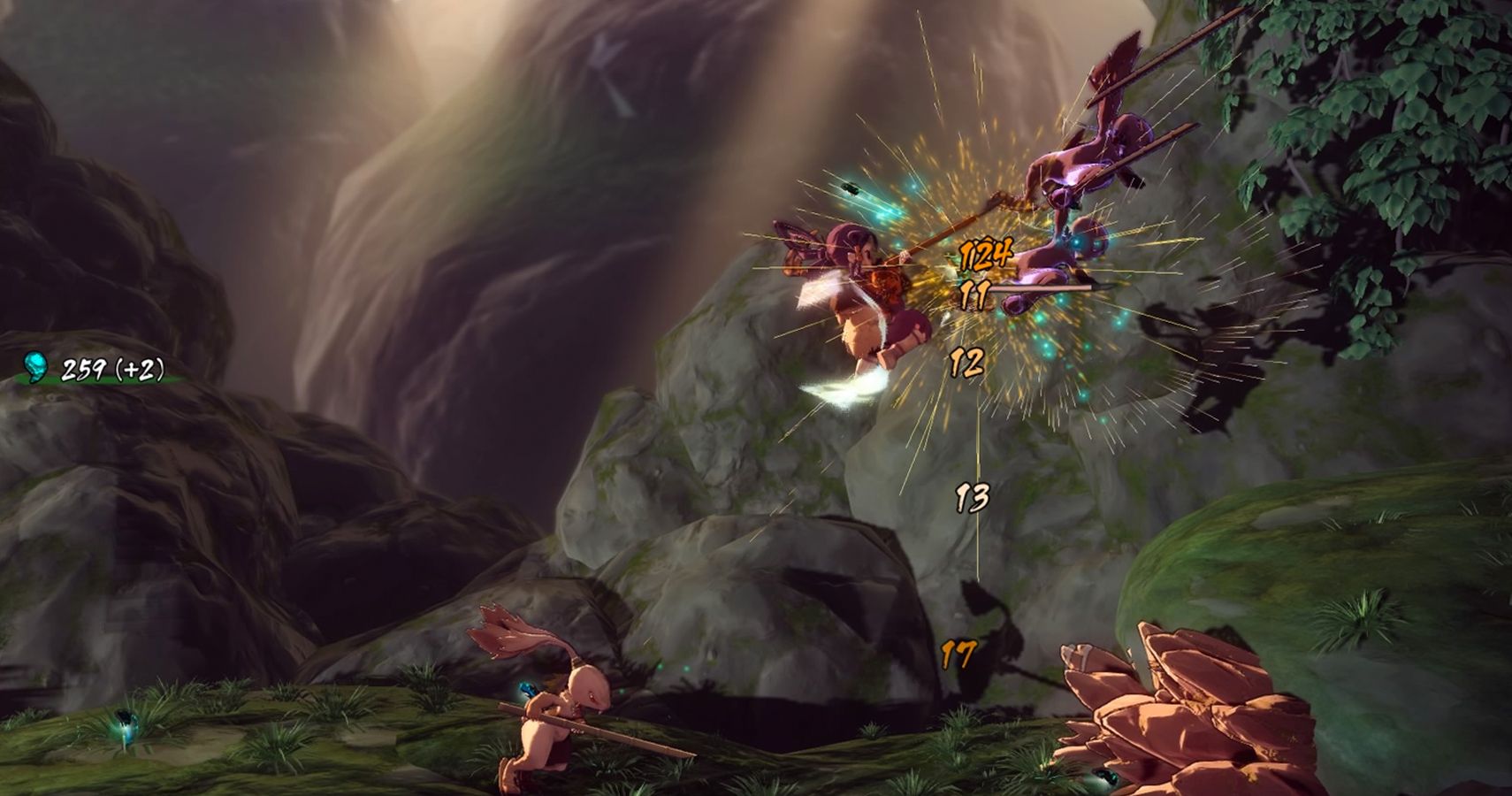 That said, Sakuna needs to be wary of taking on too much at once or enemies that are above her power level. This is where the RPG element of the game comes into play, requiring you to continue increasing the goddess’ abilities and gear which can be achieved through scrolls, as well as her cultivation of rice on her plot of land.

The game gives you plenty of reasons to return home anyways, be it to regain strength through a hearty meal or to simply wait out the night, when demons are at their most powerful. Really, though, cultivating rice season after season is my favorite part of the game. From planting to watering to weeding and harvesting, the process of growing rice is an intimate and meditative experience that I never in my right mind thought that I would enjoy as much as I do (especially considering my aversion to the farming genre). There’s a lot that goes into properly cultivating a rice harvest, with seasonal changes adding to the challenge. Of course, if – unlike me – you prefer to leave the farming to other members of your group, that too is an option. Doing so, however, would greatly take away from what I consider to be the game’s biggest strength. 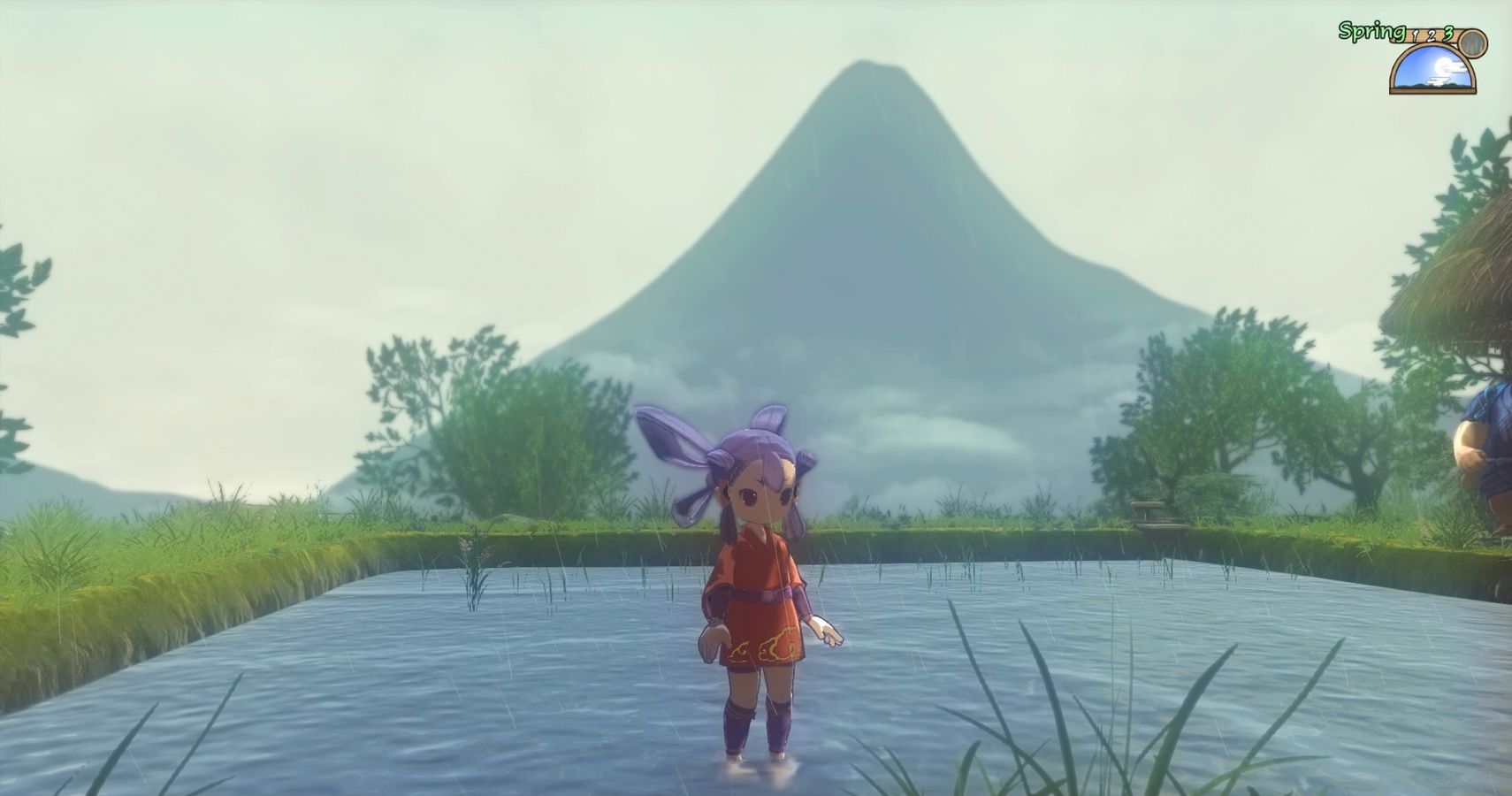 Truth be told, I wasn’t intending on reviewing Sakuna: Of Rice and Ruin until last Friday when the physical Divine Edition of the game showed up at my door, coming with the game, an artbook, a three-disc soundtrack, and a lucky charm. My intention was to speed through the game to get my review up as fast as I could. However, as I progressed through the game, I came to realize that doing so would have been a disservice to the game, as well as my own personal playthrough experience.

If there’s a single theme I took away from Sakuna: Of Rice and Ruin, it’s balance. Besides the balance required to cultivate rice, balance is knowing when to fight and when to give it a rest. When to do things for others and when to focus on self-care. Balancing responsibility with being carefree. This was especially poignant for me given the number of things I have going on in my life right now. Family, work, health, free time (or lack thereof)… I admittedly struggle to stay afloat in a healthy, balanced way. 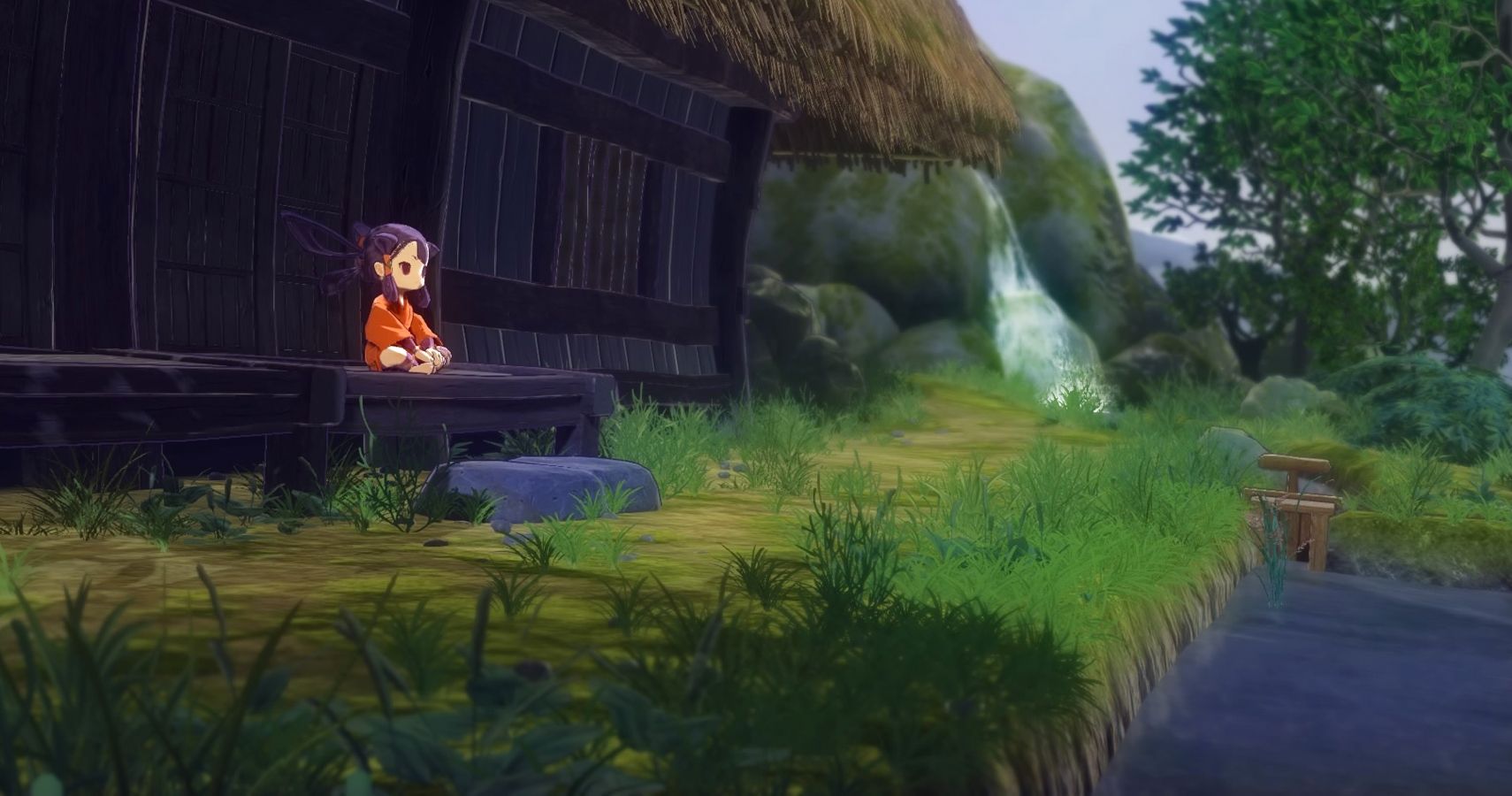 Even with its fast-paced combat, Sakuna: Of Rice and Ruin made me realize how important it is to slow down and be intentional with how I use my time. This is obviously still easier said than done, but it’s something you can bet that I’ll be keeping in mind far more often.

Sakuna: Of Rice and Ruin is an absolute delight and comes highly recommended, regardless of whether or not you’re a fan of the platforming, RPG, or farming and crafting genres. I have the game for PlayStation 4, but I will most definitely be picking it up for Nintendo Switch as well, as the rice farming process offers up a meditative experience that I’d like to play just for a few minutes before bed to unwind. It’s warm narrative, incredible voice acting talent, stellar soundtrack, and overall gameplay makes Sakuna: Of Rice and Ruin a must-buy.

NEXT: Kingdom Hearts: Melody of Memories – The Game’s Title, Explained 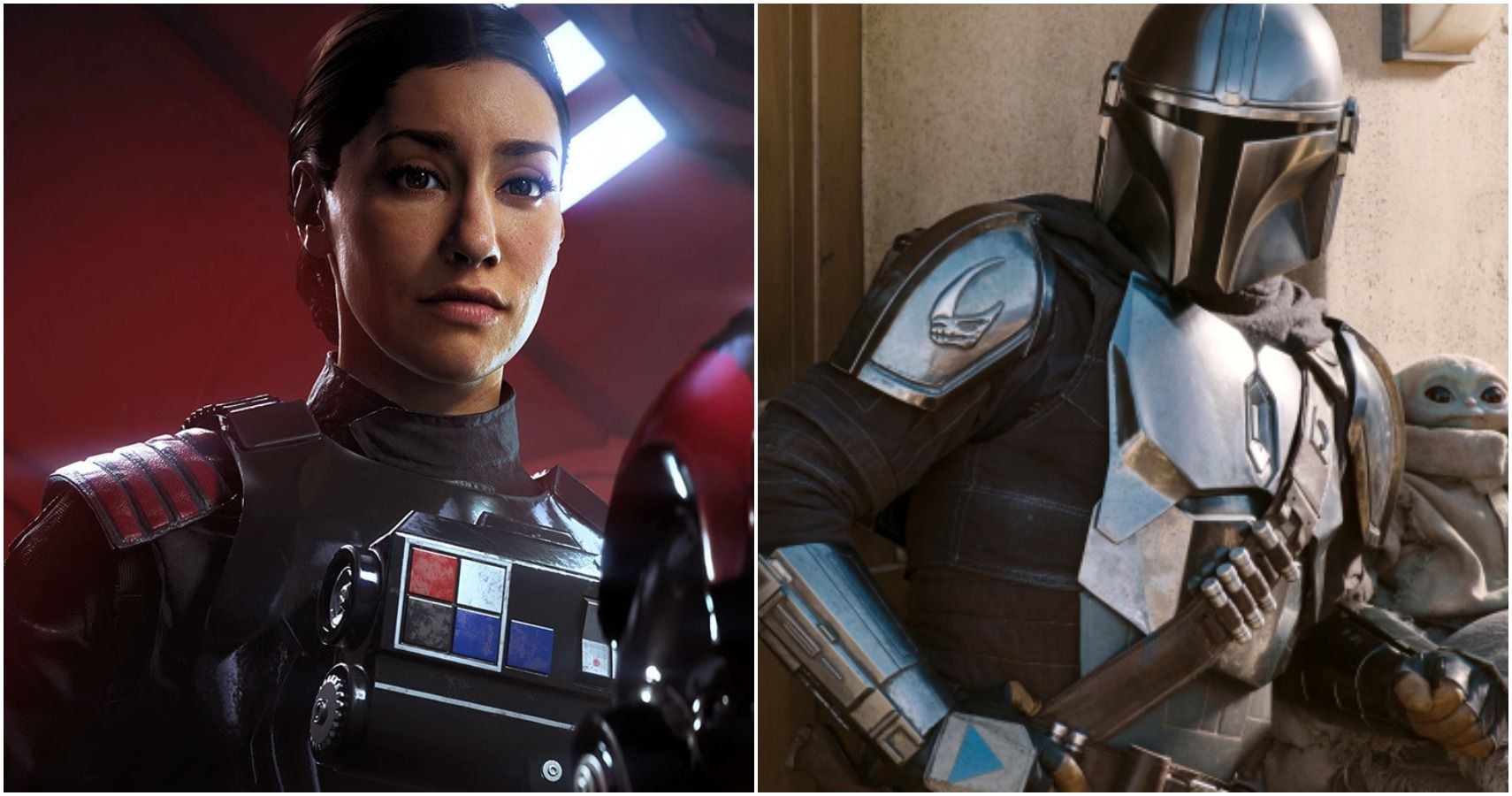