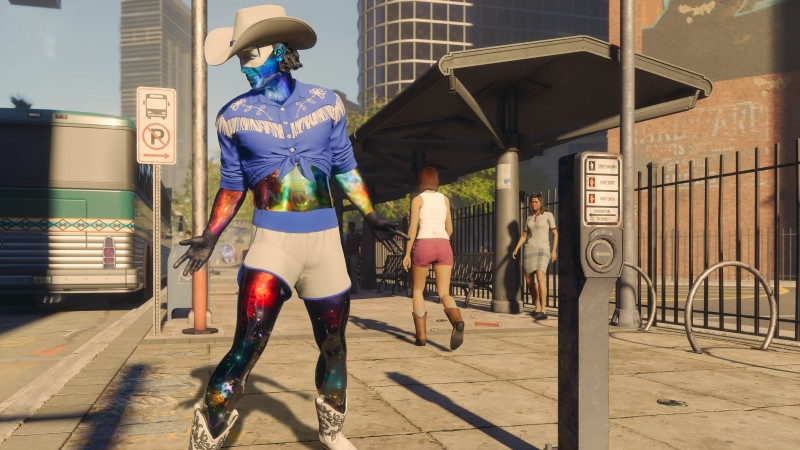 When we featured the upcoming Saints Row reboot on our cover last year, I was able to play around in the vast open world of Santo Ileso. There, I could explore freely, take part in story missions, complete side missions, and even expand the Saints’ empire through the fun Criminal Ventures mission chains. However, one area I wasn’t privy to was the customization suite, a significant part of the Saints Row package since its earliest days. When I asked about customization last year, I was given small tidbits of information, but developer Volition played its cards close to the vest. That changed today as the studio hosted a presentation detailing the fan-favorite feature.

Character customization is the biggest pillar of the feature in the minds of many fans, and Volition seems keenly aware of that fact. As you might imagine, your hair, body, and face are all fully adjustable. You can equip your character with various hairstyles, even assigning different colors for the hair on your head (including rainbow hombre styles) and your face. Ears, skin color, and teeth also allow you to make things look as true-to-life or out-of-this-world as you’d like: Pointy elf ears; unrealistic skin colors, textures, glows, scars, suntans; patterned eyes; and candy corn teeth are all fair game. You can even customize their musculature down to how vascular they are, make their face asymmetrical (i.e., one eye way bigger than the other, or offset ears), or adjust their age. And yes, you can customize your genitals, even covering them up with emojis. The Volition presentation even shows a custom creation resembling Shrek, if that tickles your fancy.

If all of this sounds overwhelming and you’d prefer to just jump into the game, Volition offers eight different presets to choose from. Once you select one of the preset characters, you can either start playing with that pre-made character template or modify from that starting point to get a quicker version of the character customization suite.

You can choose your character’s clothing (complete with customizable colors and materials), accessories, and even underwear and socks. Complete outfits are also available, including cowboy outfits, golf attire, and a firefighter’s uniform. You can also layer clothing how you want, meaning you can choose which shirt you wear under the hoodie you selected, then which jacket your character rocks over that hoodie. Later on, if you want to create your own outfit presets, you can do so at your HQ. If clothing, tattoos, prosthetics, and nearly every other visual attribute of your character isn’t enough, you can also equip emotes to give off the vibe you’re looking for and choose from one of eight different voices.

Outside of your character, vehicle customization does little to pump the breaks on the customization momentum. Saints Row features more than 80 rides to collect, including cars, SUVs, motorcycles, monster trucks, helicopters, boats, and more. If you add a vehicle to your garage, you can customize it, decking it out with all kinds of parts like body kits, neon underglow, rims, and spoilers. Just like with your character, each vehicle has preset options to help you get on the road as fast as possible if you so choose. As Volition puts it in today’s video, it’s all about creating a “Boss-worthy masterpiece.” Those wanting something more performance-driven can add nitrous boosting, ejector seats, off-road kits, a jump ability, or tow cables. If all else fails, you can hop on a hoverboard.

Once you arrive on the scene and it’s time to show them who’s boss, you can whip out your custom weaponry. You can adjust the material or coloring of individual parts or add decals to make your weapon your own. You can also swap out the entire body for something else, like putting your rocket launcher inside a guitar case or your automatic rifle inside of an umbrella. These options ensure your enemies know who’s shooting at them beyond a shadow of a doubt.

During my time with Saints Row, I only received a taste of how I could customize the Saints and their home base. Those elements were intriguing, but I couldn’t play around with the options. Instead, I only witnessed a small teaser of what would make it into the final game. As your gang grows in power, you can customize the abandoned church in which your squad posts up in various ways. In the video presentation, we witness one customized church that looks like a nightclub while another looks like a futuristic garage with a bar. You can swap out mementos from missions, change out statues, or organize your decor how you want.

Saints Row comes to PlayStation 5, Xbox Series X/S, PlayStation 4, Xbox One, and PC on August 23. However, at the end of the presentation, Volition teased there will be a way to create your character before the game launches. Unfortunately, no additional details are available at this time, but the team said to keep your eyes on the studio’s social channels for more information soon.

For more on the game, check out our exclusive coverage hub here.