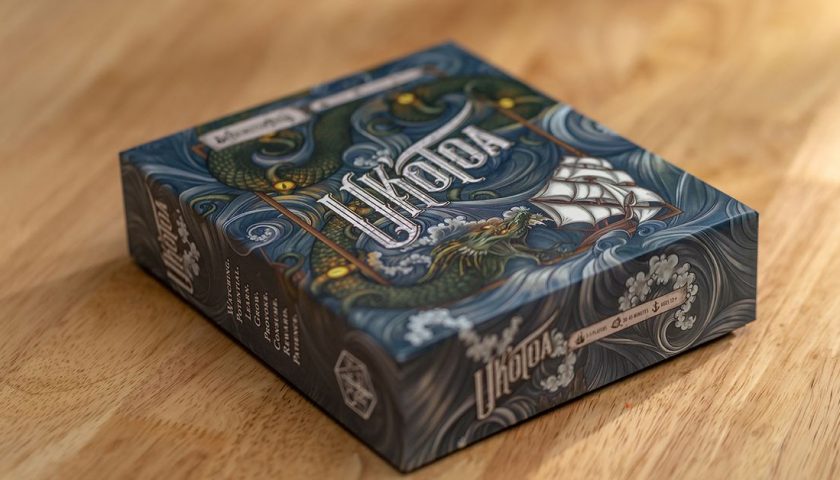 The reach of Critical Role is massive. What began as a group of friends sharing a love for Dungeons & Dragons has grown into a multi-million dollar franchise with a deal for a streaming animated series. Now the show’s reach is expanding with Uk’otoa, the first board game to be published under its new Darrington Press brand.

The good news is that, as a visually attractive curio, this product makes a great collector’s item. The bad news is that the gameplay itself isn’t all that much fun.

Critical Role began streaming in 2015, right in the middle of the cast’s first D&D campaign, which takes place in a fantastical world known as Exandria. Led by voice-actor-turned-Dungeon-Master Matthew Mercer, the group has progressed through two campaigns and nearly 300 livestreamed episodes. Critical Role has since raised more than $11 million dollars on Kickstarter, and secured a two-season deal with Amazon Prime.

The name Uk’otoa references Exandria’s serpent deity, a giant sea monster whose long-standing goal has been to free itself from an elaborate, magical prison. The board game tells the story of a single calamitous encounter between the newly liberated beast and a fully crewed sailing ship. It’s a concise, 30-minute affair that’s beautifully illustrated and lovingly produced, but one that ultimately feels a bit too tame and lacking any sense of dynamism.

My initial foray into Uk’otoa began with an interesting twist. As I started building the deck of the ship with the other players, tile by tile, I noticed that the architecture of the boat can assume a vast array of shapes. Each one allows for a somewhat different feel each time. We elected for a simple concentric circle, an approach which the rulebook suggests for our first outing.

As we alternated placing sailors on the board and received our starting hand of action cards, a second delightful realization sank in. Setting up Uk’otoa naturally creates a series of semi-cooperative alliances between the players at the table. It helped to elevate the social friction at the heart of the design. It’s accomplished by randomly placing a colored disc between you and each of your neighbors at the table. The color denotes the faction of crew members you and that person must protect. So a green disc placed to my right connected me with Jennifer, while a yellow on my left forged a team with Mark. It didn’t take long for rivalries to emerge as this setup arranged multiple overlapping teams.

Protecting your sailors is difficult. A well crafted, moderately sized Uk’otoa miniature slowly trudges forward, devouring the ship tile by tile. Anyone in its path gets swallowed and removed from play. The mechanic puts players against the wall early, and forces you to spend the entirety of the game maneuvering your crew members to safety in order to stave off their inevitable death.

It wasn’t long into the game when I played a tentacle card, an action which causes Uk’otoa to lash out and slay multiple adjacent sailors. In this particular instance, of carnage two blue sailors were felled, but also a poor little yellow bystander. Of course Mark wasn’t pleased, since our alliance lost a soul, but on my opposite side Jennifer couldn’t hold back the laughter. Player agency consists entirely of using action cards such as that tentacle. It’s a neat system where you toss out a card to move your own sailors, push others around, and partake in bloodshed at the behest of the monstrous sea beast.

I latched onto the game’s hand management aspect right away. If you play two duplicate cards of the same action then you can keep your turn going. This requires some clever decisions around sandbagging options and hoping to pull a matching action from the deck. So we went back and forth, taking turns throwing elbows and fists in order to push each other aside. Already invested in multiple teams and, since I only needed one of my sailors to survive, each loss and dramatic turn brought plenty of laughs. I could feel the light and jocular nature of the game creeping in, which overruled any sense of punishment.

As quickly as we started, though, the end game approached. Before long we all realized that the last few pieces remaining on the board would decide the outcome. These pieces were seeded during the initial setup, sailors placed at the heart of the ship where Uk’otoa would arrive at the climax of the violence. For the previous 20 minutes we shuffled our sailors around and pushed others into harm’s way, but none of it had actually mattered.

The natural tension of the finale was lessened by the inconsequential experience that led up to it. As the once jocular tone shifted, the atmosphere became dominated by a strong feeling of feebleness. This is because when you pull off a promising move — such as shoving an opponent into harm’s way while saving your own piece’s plastic skin — it doesn’t really matter. The beast Uk’otoa will devour everything in the end, and keeping one of your sailors alive just a little bit longer is ultimately irrelevant. The totality of play comes down to just those last few turns where the stakes are finally raised. That tends to sap the life out of the game. Everyone at the table is just going through the motions until the final few rounds. This isn’t altogether terrible design, it’s just not very exciting.

Another issue is that the game suffers at higher player counts. With four or five people at the table there are so few open spaces on the board that the movement cards are of limited utility. This leaves players mostly pushing Uk’otoa forward or lashing out with a tentacle if they’ve gotten lucky and top-decked one of these options. But, even those cards can offer little benefit if the pieces that happen to be surrounding the monster are your own.

My memory of the victorious team in that first playthrough is non-existent. As I fell into the design and explored what it had to offer, it left me cold and indifferent. Further playthroughs only exacerbated that problem.

I was hoping for a design that captured some of the feel of friction-heavy board game classics, such as Lifeboats or Survive: Escape From Atlantis, dressed up in the trappings of Exandria. What I got was a Critical Role bauble which can chew up a half hour of time. Sadly, anyone seeking out a truly noteworthy tabletop experience is better off looking elsewhere.