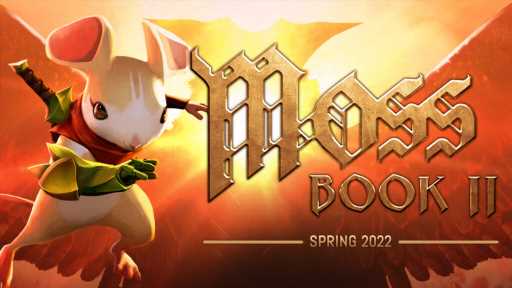 Fans of the first title will recall how narrative lead the experience was, and that story arc is set to continue in this second outing. The plucky mouse rescued her uncle Argus from an evil menace, this time around, to finally end the merciless rule of the Arcane she must confront a winged tyrant hunting her within the hexed castle where her uncle was held captive.

Polyarc has revealed that Moss: Book II will continue to blend both action and puzzle mechanics, where players will face: “dangerous terrain, challenging puzzles, and enemies twisted in fire and steel.” While there’s going to be some familiar characters returning there’s also going to be plenty of new faces and gameplay features to experience. Those shown so far include a nature attunement ability to grow new pathways and a huge hammer to really smash things up.

Alongside other games like Astro Bot Rescue Mission, Moss showcased the innovative ways third-person gaming could work in virtual reality (VR). VRFocus said in its review: “Moss is a flawlessly crafted experience starring a character that absolutely deserves to be the face of modern VR. Every inch of the world shows attention to detail, and a story is woven that draws you in, making you truly invested in the world and in Quill as a person.” So the expectations are high for Moss: Book II.

Currently, Polyarc has only confirmed a PlayStation VR version of Moss: Book II with no mention just yet of other platforms such a Meta Quest. Considering the original Moss eventually supported most VR headsets, multiplatform support is expected.

Take a look at the new launch date trailer below and as further updates are released, VRFocus will keep you informed.