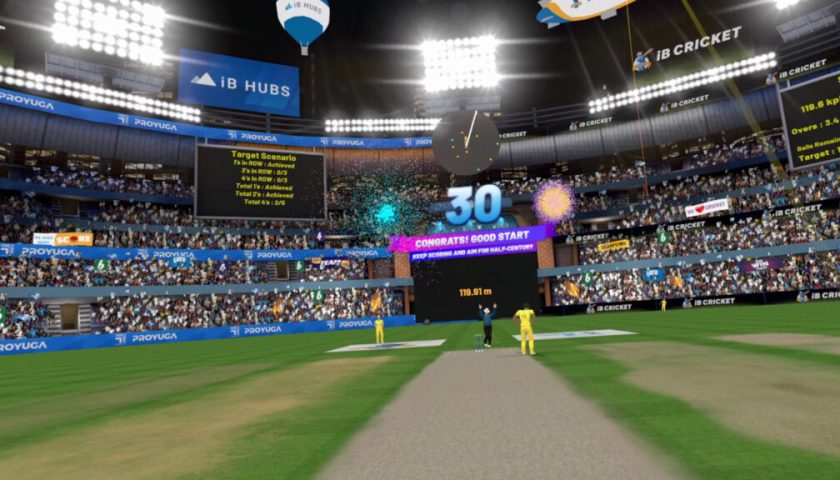 Sport is one of those universal activities that bring people together no matter where they’re from yet some translate better across the world than others. Football (soccer) seems to have near-universal appeal yet when was the last time you watched a cricket match? In fact, if you’re not a fan do you know how it’s even played or what an over is? Well, if you’ve ever been intrigued by the game of cricket then you’ll want to take a look at iB Cricket by ProYuga, one of the best cricket titles currently available for beginners and veterans alike.

Currently in Steam Early Access for PC VR headsets, iB Cricket assumes right from the start that you know nothing about the sport. This is really refreshing as some sports titles give you a controller rundown and that’s about it. iB Cricket feels more like a VR experience created by cricket fans who want you to fall in love with the game like they have, running through the basics of the sport with instructional videos that have actually filled in a few black spots for this player. If you’re familiar with cricket then you can easily skip past all the intro stuff and get right into the extensive gameplay selection on offer.

And it is very extensive, even for an Early Access title. There are gameplay options galore, from just getting started with a few overs in Quick Play to trying some of the more specific skill challenges, there’s a dizzying array (day/night, ground type, stadiums, bats) that should keep you entertained for hours. One of the best places to begin is the Coaching option if you are completely new to the sport. Here you can learn the various defensive and offensive motions to scoring and scoring well. At this stage you’d be quite right in thinking iB Cricket is as close to a pro cricket simulator as you could get in VR, teaching you where to look and how to strike the ball for maximum power.

After each hit, you’re provided with stats on what you did wrong and how to improve. It all worked exceptionally well, actually doing what it claimed to do, taking someone who could only hit the ball in one direction to actually having some semblance of control and choosing where the ball should go.

Which was a particularly good showcase for iB Cricket’s mechanics and physics. Being a cricket game you get to keep a bat in hand at all times, whether you’re hitting a ball or pressing the big chunky menu buttons which is a nice touch. So you can do away with the second controller and get into the feel of the gameplay by using both hands on one controller. If you happen to be an HTC Vive owner with the normal Vive controllers then iB Cricket does fit exceptionally well due to the longer handle design.

The bat swing feels natural with no noticeable lag and for that extra bit of immersion, there’s a suitable thud when knocking the bat on the ground. When playing against the AI bowlers they will throw all manner of spinning, fast, and slow balls at you, which really begins to showcase the complexities of the sport.

However, iB Cricket isn’t a fully-blown cricket sim as that would be a little impractical. It supports room-scale only gameplay and all you’re doing is batting, there’s no bowling or fielding here. Likewise, there’s no running so be careful letting new players try it, last thing you want them doing is running for a wicket and slamming into a wall! General runs are wisely scored by the distance the opposition has to run and the time it takes them, which works well enough.

Visually iB Cricket looks decent enough with the stadiums providing that grand sense of occasion. Player models are also fairly well detailed and the bowlers do act the part by varying their run-ups –  although, there was a number of occasions where a longer run would turn into an anti-gravity hover along the ground which was amusing. Also, the commentary is quite grating as it’s clearly just a robotic AI voice giving you rather boring feedback which gives a rather stale atmosphere. Some real voice acting would go a long way in enhancing that feeling of immersion and presence.

Most importantly though, iB Cricket was a lot more fun than expected. All the core mechanics seemed very well-tuned with no noticeable bugs or glitches suddenly ruining the gameplay. It may still be in Early Access but it has all the makings of a true cricket simulator, possibly turning a few gamers into fans in the process. You have a ton of options to play with and to unlock, plus there’s even a demo so you can give it a whirl and see what this game of cricket is all about