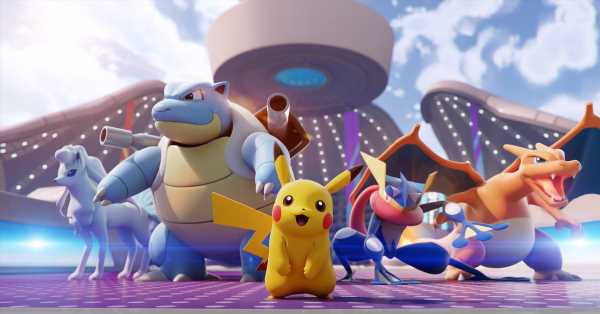 I never knew it would feel so good to do a slam dunk as Pikachu until I picked up Pokémon Unite. As I hold the button, I can almost feel the energy inside my Pokémon welling up and then bursting out as I dunk a glowing orb into the opposing team’s hoop.

No, Pokémon Unite is not a basketball game. It’s actually a top-down, combat-based multiplayer game. In short, it’s a MOBA. Created by The Pokémon Company and Tencent Games’ TiMi Studios, Pokémon Unite dangles beloved Pokémon like Charizard and Snorlax to attract one of the world’s biggest fan bases to a new genre. However, what lies behind all the “cute Pokémon stuff” is a fleshed-out MOBA that rewards players who dive headfirst into the game — despite some outstanding qualms relating to its in-game purchases and grind.

In Pokémon Unite, a standard match consists of a 10-minute 5-vs-5 match in a three-lane arena. Like in any other MOBA, each Pokémon has its own specialty — a jungler to collect points, a healer for keeping everyone alive, a tank to help defend — you get the picture. You’ll face miscellaneous low-leveled Pokémon scattered throughout the field as well as members of the opposing team to collect Aeos energy that can be used to score against your competitors. As you fight and win battles in real time, your character levels up, evolves, and learns new attacks. Evolutions reset after every match, though, so the long-term training of mainline Pokémon games is absent here.

Pokémon Unite spins the innate instinct to mash a button over and over again into a genuinely enjoyable game. Two months later, and I have still not tired of spamming ice attacks as my adorable Alolan Vulpix to mow down poor, unsuspecting Corphish. Beating a Pokémon rewards you with their collected Aeos energy, which contributes to your team’s overall efforts. The joy in the matches comes from the repetition, and it doesn’t feel monotonous.

Generally speaking, previous knowledge of the mainline Pokémon games will not help you here. There are no elemental weaknesses. There’s no background lore that informs the way the world works (say goodbye to gym battles). And no, there is no “catching ’em all.” Despite hundreds of Pokémon to choose from and the large size of the rosters in MOBAs like League of Legends, Pokémon Unite is still new and building its cast as it goes.

At first, I found it easy to jump into the game. Its short matches, simple premise, and cute creatures made it the perfect fit for a few matches before and after work. I also don’t have to deal with people being toxic online since there’s no voice chat. But looking back at my journey, I’m surprised by how intense I’ve had to become to keep up with it.

Pokémon Unite pulled me into the competitive MOBA world and all the esoteric knowledge that comes with it. I looked up videos for how to play my character. I learned different strategies for early-game and late-game and the differences between the two. I began using terms like “jungler,” “laner,” and “gank” with my friends.

Because it’s Pokemon, there are a lot of what you might call “casual players.” (A joke proliferated recently on TikTok about how the game is full of kids.) And while it’s obviously fine for people to dip their toes in the MOBA waters with a property they’re familiar with — I did, after all — Pokémon Unite is at its best when everyone in the match is somewhat dedicated to getting better.

Pokémon Unite has a Gengar problem

Although the game struggled with some balancing at the start — a problem common to any new competitive game — developer TiMi Studios has consistently released fixes. Pokémon Unite was released in July but got significant patches in August and September to address some glaring issues (an overpowered Gengar, for one). However, if you’re looking for a game that’s going to drop a new map every other week — or quirky battle modes — Pokémon Unite is not that game (so far). Even today, you’ll find yourself playing in the same old stadium in every match.

In addition to keeping things balanced, Pokémon Unite understands the appeal of cool outfits and bizarre skins. For example, this is the first Pokémon game to put a Gengar in a spacesuit, and Blastoise in a tweed suit. I also love the level of customization for the trainer. I dressed my character up for fall, and she wears a gingham skirt paired with a sweater vest and loafers.

But all of these perks come with a giant caveat: The in-game purchases are a mess.

There are three currencies: Aeos gems, Aeos coins, and Aeos tickets. Understanding what each currency does, how you get them, and what they’re used for presented a significant headache. There is a menu that explains each currency, but it’s still needlessly obtuse. What’s more, the game has a gacha system with glorified lottery tickets that can be powered up for better odds. It’s overwhelming if you don’t want to do additional homework online.

Crucially, unlike other free-to-play games like Fortnite, the money you spend in the game can actually impact play. Cosmetic items called Holowear can give Pokémon unique abilities, and item enhancers are locked either behind money or a ton of grinding. (Which, may I add, has its own limit since you can only make 2,100 Aeos coins in a week and a Pokémon costs anywhere between 6,000 to 10,000 coins.) These “pay to win” aspects allow new players with more money to compete — or even beat — more experienced trainers who have put the work in.

On one hand, Pokémon Unite is a very easy game to play “casually.” This accessibility is no small achievement, given that League of Legends developer Riot Games had to release a completely separate game to draw in a more casual crowd.

On the other hand, if you’re looking for a quaint game to be “moderately” into, well, this might not be the one. Pokémon Unite is at its most enjoyable when dedicated players are going head to head. I was looking for a game to play but fell into an entirely new hobby unto itself. I picked up Unite for the Pokémon but ended up staying for a compelling new challenge. It gave me the opportunity (and the excuse) to apply myself and learn to play a MOBA well. And when it comes to MOBAs, that’s no simple feat.

Pokémon Unite was released on July 21, 2021 on Nintendo Switch, and on Sept. 22, 2021 for mobile. The game was reviewed on Switch. Vox Media has affiliate partnerships. These do not influence editorial content, though Vox Media may earn commissions for products purchased via affiliate links. You can find additional information about Polygon’s ethics policy here.