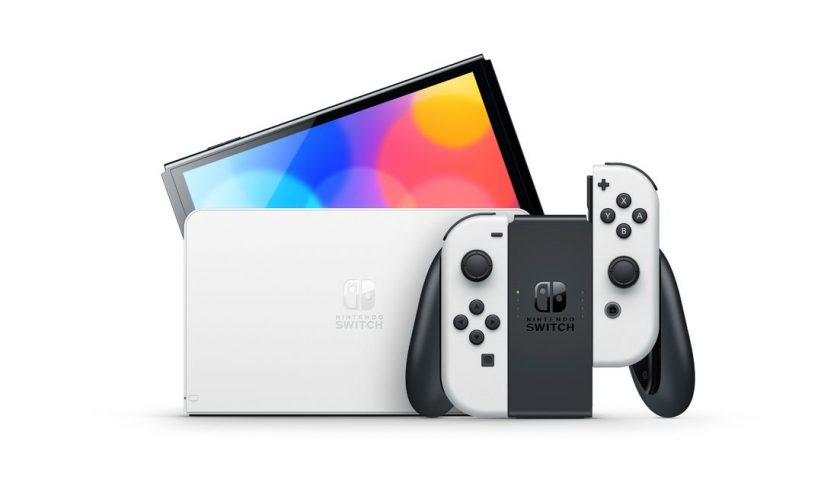 This new-look Nintendo console isn’t the full Switch Pro gamers were hoping for but it is still the very best handheld machine the Mario firm has made.

It’s all about the jazzed-up screen with this device, which now boasts a bigger 7in display with a slimmer bezel. It feels considerably bigger than the old 6.2in LCD original model when you hold the console.

It’s incredibly vibrant too thanks to the OLED – organic light-emitting diode – screen, which brings games like Metroid Dread and WarioWare to life much better than before.

Games seem to pop out of the screen with a vitality, colour and high contrast brightness that you didn’t realise you were missing on the old machine.

As such, it immediately becomes your default Switch and there’s no going back.

I’d describe is as the same feeling you experience when laying your eyes on a 4K TV for the first time when all you’ve known is SD visuals.

Another big improvement is the adjustable stand.

Beforehand you had a flimsy bit of plastic at the back of the Switch which popped out to the left and held the console up in tabletop mode.

But of course, as many a gamer will testify, a little knock and the balance would immediately be off and it’ll fall down on the table, often mid-game, just as you were about to win that final game of Mario Kart.

Now we have a flip-out stand that goes right across the back of the machine.

It’s so much more study that you won’t ever worry again about the Switch falling over and you’ll notice yourself playing titles a little more in this way as a result, pulling out the cool white Joy-Con controllers and popping them into the supplied controller clip.

It, subconsciously at least, makes the OLED more accessible to multiplayer gaming with friends and family.

There’s now 64GB of storage, which is great news and double the original.

Even when it first came out in 2017 there was criticism of a lack of space and games are generally only getting bigger.

So this will hopefully help you to keep more games on your built-in hard drive as well as continued support for significant microSD expansion.

Nintendo have enhanced the built-in speaker audio too to make the games stand out clearer and better in a busy room when playing with pals.

The machine, which is a beautiful bright white colour to establish itself away from the previous darker body form, also has a TV dock like previous iterations which is largely identical.

The OLED Switch is going to mostly appeal to those who have never had a Switch before, gamers who’s ageing original four-year-old model needs replacing and the hardcore who are just dead keen on having the latest and best gadgets.

If you don’t fit those categories I’m not sure it’ll be worth shelling out another £300 just yet, maybe wait for it to discount.

Don’t expect a vastly improved computer inside with different games to play, this a very much a better version of a tried-and-tested model that has conquered the globe.

But also be in no doubt that this is the best version of the Nintendo Switch around.

And it’s impressive screen boost, combined with a doubling of internal memory, means it’s all set for another four years of gaming fun.

Metroid Dread is effectively the launch title on the new OLED console and is one of the best looking Switch title’s we’ve come across.

It’s Japanese-esque vivid space design really makes the most of the new 7in screen and its vibrant display.

Colours and atmosphere bombard you as you take to the role of bounty hunter Samus Aran as she tries to escape a cavernous alien world played by robot monsters.

Based on the 2D classics of yesteryear, the game feels incredibly fresh as you platform your way along metal corridors and caverns, slowly unpeeling the onion of a story that leads to boss fights and running laser battles.

It sits easily among the best platformers on the Nintendo right now and once you learn the basics you’ll find yourself thrown into the deep end in what is a tough twitch-platform shooter where you’ll spend as much time dodging the baddies and their bullets as killing them.

The various weapon upgrades always come at the perfect time, so as you reach a new unassailable position suddenly you’ll discover a new grapple beam or missile upgrade that’ll open the unopenable door.

Power-ups are the name of the game and really you’ll only ever progress if you knuckle down and really explore all the ever-expanding areas you come across for that next key to get you on.

The worst bits are the face-offs you have with E.M.M.I robots, animal like stalking machines that chase you around the map.

It gets a bit Alien Isolation at points as you dart at speed around barely-memorised levels to dodge the beasties, often avoiding face-to-face conflict to make it to a safe zone with more killable bots.

And, without spoiling the fun, the bigger boss fights are worth working towards, both in graphics wow-factor and challenge.

A great game and an ideal title to kick of the Switch OLED era.