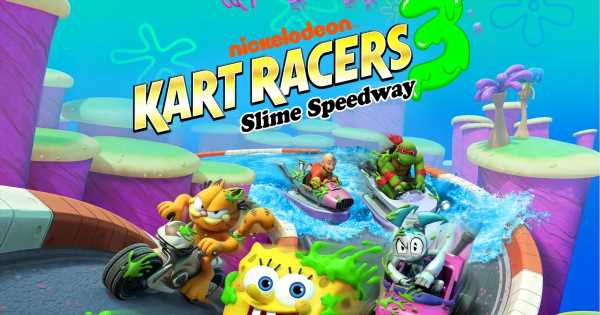 From Spongebob to the Ninja Turtles, you’ll feel instantly familiar with this rip-off kart racer as it’s so similar in style to the Nintendo gaming legend.

But it’s in the gameplay that the two go their different ways, as Kart Racers 3 fails to deliver a good driving title when it comes to the joypad.

It’s fiddly, awkward at points, and the kart didn’t drive the way I wanted it to far too often.

As a result, for all the fancy game modes, local co-op and online connectivity, it can be a frustrating game to play and that’s a shame.

Because in here, there’s potentially a lot of fun to be had.

There’s a cast of over 40 iconic characters to pick from, Garfield, Ren and Stimpy, Arnold from Hey Arnold and the Rugrats to name but a few from the kids channel.

They’re all well drawn and voiced appropriately, with cheeky quips delivered as you spin around wild, bright cartoon tracks based on their home shows.

It’s chaos in a good way as you try to avoid green slime on the 36-odd tracks, switching between your custom kart and watercrafts to navigate differing terrains.

Just like Mario you get power ups along the way thanks to ‘crew members’ who help you along to a win when you build up your slime meter, like when one of them smashes you faster down the track with an oversized hockey puck.

But it’s all a pale imitation of Mario Kart and that would be fine if the gameplay matched up to the depth in options.

Nickelodeon Kart Racers 3 might be worth a look once it’s in the bargain bin, but for now it’s not worth the £40 full price.

You’re better off saving your money for something like Beyonetta 3.