If you thought Tetsuya Nomura wouldn’t pack vital Kingdom Hearts lore into a rhythm game spin-off, then I’m honestly impressed by your naivete. Going into this game, I wasn’t really sure how much it would ultimately matter to the overall continuity, but figured there would be at least one or two key details.

Surprise – Kingdom Hearts: Melody of Memory is actually incredibly important to the plot! The game ends in a twenty-minute cutscene, followed by a very important post-credit sequence. Both of these clarify and contextualize details about III‘s ending, as well as add in new bits of lore that will likely come into play in the next game.

So, what are these details? Read on to find out – but only if you’re prepared for some major spoilers. 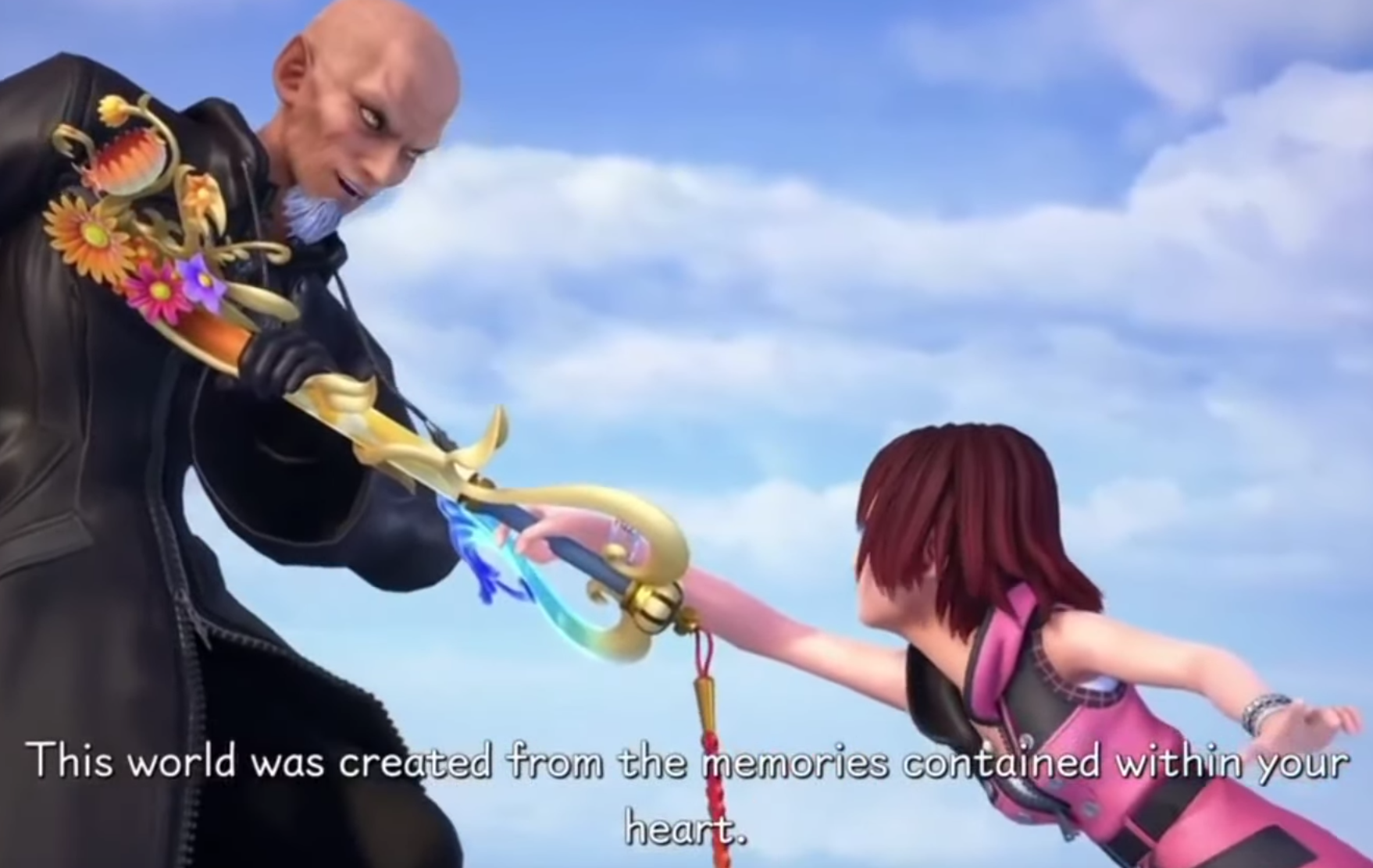 The majority of Melody of Memory revolves around Kairi’s search for Sora after the events of III, which she does by navigating her memories while in a fugue state. As she reaches the end of her journey, however, she’s accosted by none other than Xehanort. Now, it’s worth mentioning that this is a dream recreation of Xehanort, meaning that he’s just another fabrication created from Kairi’s memories.

Still, this fake Xehanort puts up quite the fight, and almost does Kairi in entirely. However, just as all hope as lost, Sora tags in to help finish his nemesis off. Well… sort of. The iconic protagonist actually takes remote control of Kairi’s body from a distance, then uses her to kill Xehanort all over again. That’s right, folks – Kairi’s still getting the narrative shaft in her own game.

Just as Kairi’s waking up, however, Dream Xehanort drops a little tidbit of information regarding Sora’s whereabouts. He reminds Kairi of her childhood, during which the antagonist yanked her out of Radiant Garden and told her about a world on “the other side.” The full quote is as follows:

If you arrive in a world that’s neither of light nor darkness but somewhere else on the other side, your task will be far from easy.

With that, Kairi’s time in her memories comes to an end.

There’s A Parallel World (That’s Also Fake, But Also Not?) 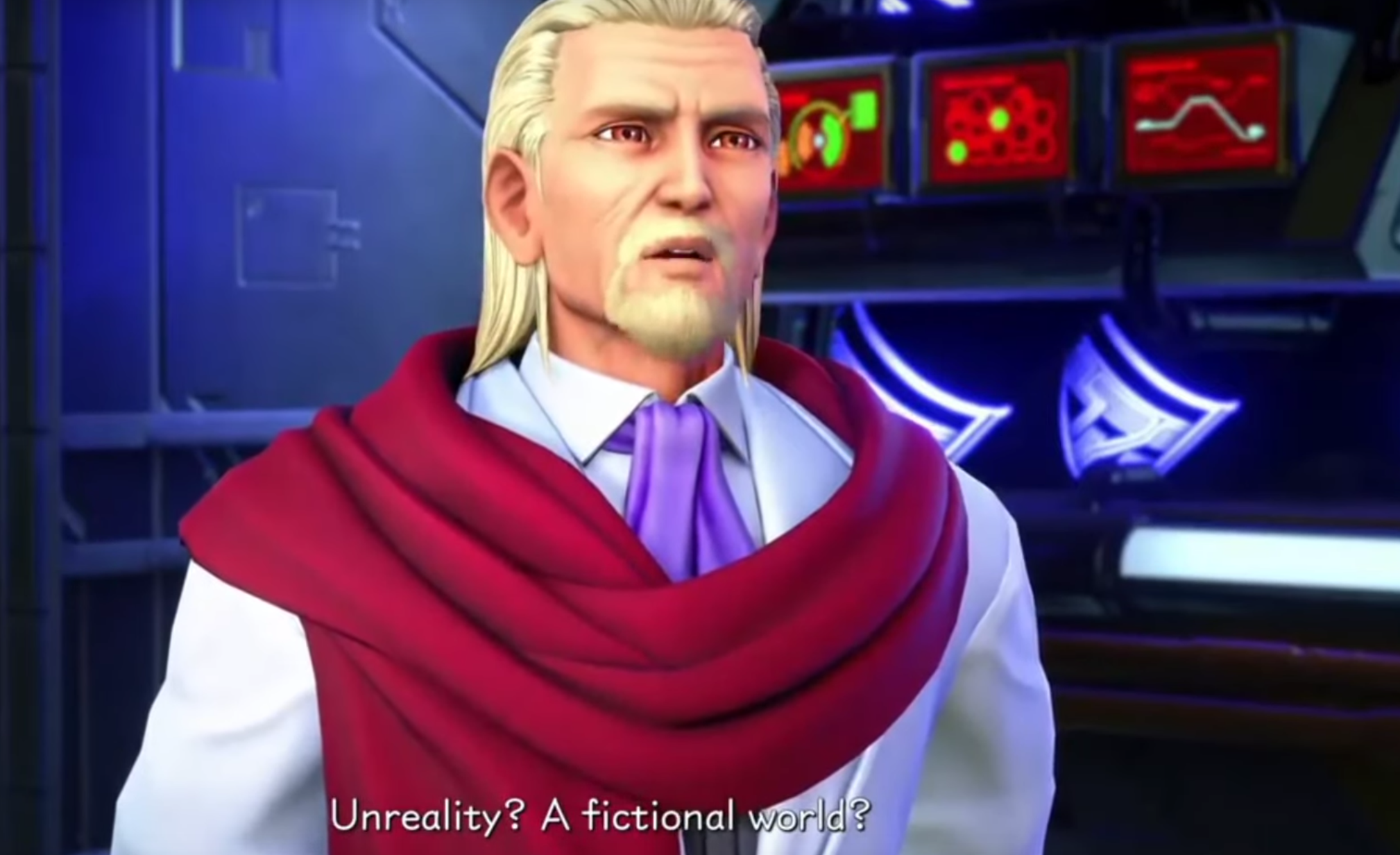 Upon emerging from her slumber, Kairi tells Ansem about Xehanort’s talk of the “other side.” Ansem concludes that this “other side” is a world that’s completely fabricated – something he describes as “unreality.”

Before things get too oblique, the Fairy Godmother poofs in out of thin air to add some much needed clarity. As luck (and convenient writing) would have it, this “unreality” is a place that be traveled to, and the Disney icon just so happens to know someone from there.

The Godmother whisks Riku and Kairi away to The Final World, where they’re greeted by a faceless, shapeless, nameless girl. Fans will remember this character, as she first made her appearance in Kingdom Hearts III as “The Nameless Star.” Nomura has hinted that she’s a different version of a character that’s already appeared, and that her identity will be revealed in the next game. During this cutscene, we found out that the girl lost her form in another world, and if she returns, her heart will be stolen from her. Fairy Godmother also states that she’s the final key to finding Sora.

Riku Goes To Find Sora (And Leaves Kairi Behind) 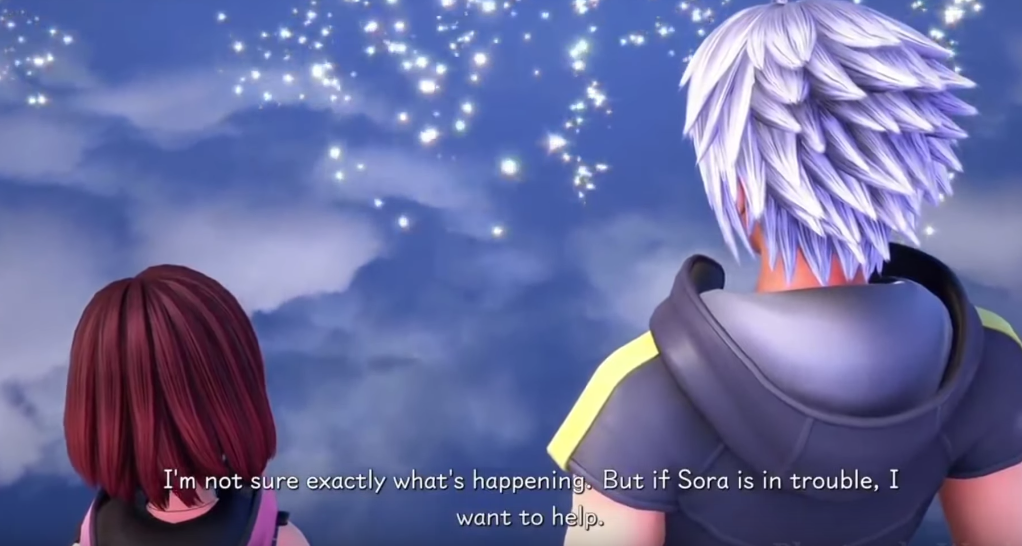 Riku asks the Nameless Star about his visions of a modern metropolitan city, and she immediately recognizes it as Quadratum – a city in her original world. She uses her ethereal form to make a keyhole of sorts, which Riku taps into with his keyblade and whisks himself off to another world.

Meanwhile, Kairi hangs back to continue her keyblade training, and in a post-credits sequence, we learn she’s studying under Aqua. Meanwhile, Yen Sid tasks Donald and Goofy with finding and informing their comrades of this new quest, which he warns could be their most dangerous yet. Mickey is sent to Scala Ad Caelum, where he will investigate ancient Keyblade Masters that supposedly fled to this other world.

So, What’s This All Mean?

Ultimately, Melody of Memory finds itself being not a conclusion to Kingdom Hearts III, but rather the first chapter of wherever the series goes next.

Think about it – all of the pieces are in place for a new game now. Kairi is going to become a Keyblade Master under Aqua. Riku is going to explore a new world we’ve (theoretically) never seen before. Donald and Goofy are going to get a crew back together, and Mickey is going to dig into the whereabouts of the Ancient Keyblade Masters. Meanwhile, the Nameless Star’s identity is closer than ever to being revealed, and it stands to reason that Nomura will stick to his word of revealing her identity in the next game. This character, who’s been in the series before, will likely play a huge part in the overarching story.

We now have every major player in place to begin a new era of Kingdom Hearts. The Organization XIII arc is more or less over, and whatever comes next will likely be a different threat altogether – although it’s hard to imagine the series doing away with the collective entirely. Whatever the case may be, Melody of Memory leaves players not with a sense of finality, but with the promise of new beginnings.

And with any luck, those beginnings won’t be unveiled in a dumb mobile game, but will form the main narrative thrust of the next main game.

Next: Kingdom Hearts: Melody Of Memory Review: “Got It Memorized?”