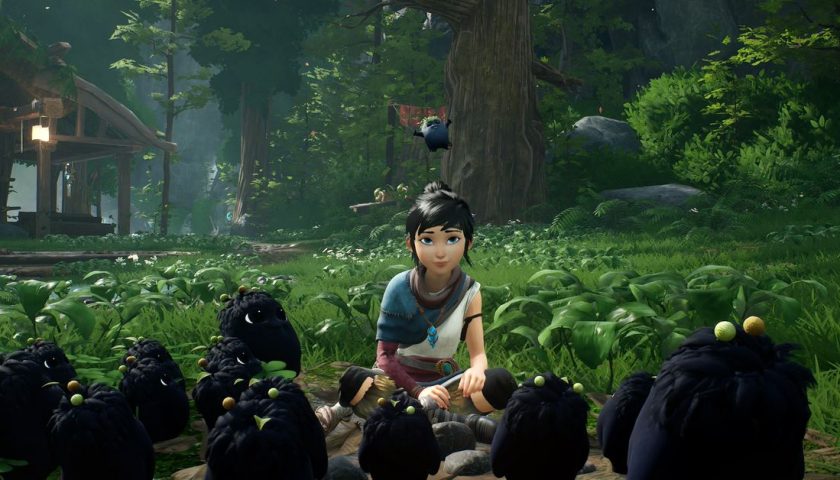 Kena: Bridge of Spirits is the first game from new studio Ember Lab. Its first trailer made it look like a cute romp through a forest overtaken by darkness, but after spending over an hour with a hands-on demo of Kena: Bridge of Spirits, I’ve learned it’s surprisingly difficult. Kena may look like the latest from Pixar, but the final mini-boss I encountered kicked my ass up, down, and sideways.

Kena: Bridge of Spirits has layers to it — some cute, others tough — and it made for a fun preview full of surprises.

What is Kena: Bridge of Spirits?

Teleporting, monkey-like enemies tested me after I picked up the bow
Image: Ember Lab

Kena: Bridge of Spirits is a character action game with a close-to-the-back third-person perspective. I play as Kena, a girl with a unique fighting style, a groovy stick, and the ability to commune with nature around her.

At the outset of the demo, I guided Kena through the forest, working to find one of three artifacts needed to cleanse one of three areas in the game world. I ran around with my stick, followed by a merry band of Rot. Their name may sound gross, but these surprisingly cuddly creatures not only aid me in puzzles, but help me in combat as well.

I dash through the forest and run into a small group of wooden foes. In response, Kena’s posture changes; it’s time to fight. My attack controls sit comfortably on the right trigger and bumper, similar to God of War. I can hit these enemies with light or heavy attacks, and the better I do, the more my Rot can aid me in battle. Eventually I charge up my gauge enough to send the Rot on the attack, freezing my enemy and letting me get a few hits in.

When the encounter ends, I explore the area and find another member to join my Rot party. Now I have nine; one more and I’ll reach a new threshold, unlocking another gauge to use in combat.

I keep moving forward, deeper into the forest. I run into some platforming sections, areas to collect currency, and more combat arenas. Ember Lab’s founders explained to me over our Zoom call how I can use my Rot gauge to heal myself or attack, even prompting me to unlock a powerful hammer blast that uses my Rot to deal massive damage.

Eventually, I pick up a major augment for Kena: a bow.

Familiar, in a good way

These flowers act like grappling hooks when you shoot them
Image: Ember Lab

Kena swaps playstyles quickly, making me feel like I’m playing more than one game at once.

In combat, I feel like I’m Kratos, beating on an enemy or calling on Atreus (in this game, my Rot) to aid me in battle. When I’m using a bow, I feel like Aloy from Horizon Zero Dawn, jumping into the air to shoot slow-motion shots and nailing weak points. And when I’m using my Rot to solve puzzles and move things around, I’m Captain Olimar controlling a legion of Pikmin. Somehow, all of this feels right in Kena’s hands.

In a mini-boss fight, I could use my new bow to break weak points, dodge out of the way, and use both of my Rot attacks to freeze the boss before bashing it with my hammer. I could’ve solved that fight in multiple ways, but controlling Kena felt fluid no matter what I was doing.

From what I played, Ember Lab has successfully blended these playstyles into a cohesive game where I always felt like I had tons of options. As my army grew, and as I unlocked more abilities and collected new pieces of equipment, I felt my potential grow.

This asshole gave me a run for my money
Image: Ember Lab

That Rot combo on the final mini-boss felt nice to pull off, but I also got my ass handed to me the first two times we fought. Kena’s combat requires a lot of finesse. Once I start an animation, I have to follow through, and both Kena and her enemies hit hard. For a game this cute — and the Rot do feel designed to sell plushies — I wasn’t expecting to get beat down the way I did.

That said, the fight didn’t feel unfair, or even insurmountable. As soon as I focused up, I started experimenting with what I could do. I was able to learn in real time and take the boss down without even getting hit once on my third attempt.

Kena promises depth for all kinds of players, both young and old, under an almost deceptive layer of cuteness. For young players, the adorable Rot characters can populate areas in the world while you’re exploring. Your little buddies will just pop up on a table you’re looking at, giving life to the world around you with an explosion of cuteness. The game also offers an easier difficulty, so players who just want to play the game for the story (or the Rot) can see it through to the end. Meanwhile, more advanced players have a host of difficulty settings available that can take that boss from “I need to focus” to “I need to be perfect.”

Kena will last about 10-12 hours for a normal playthrough, according to the developers — but it’s got a lot going on inside. Kena and Ember Lab pay homage to action games that have come before, but with a cutesy twist. More impressively, the studio blends the two together so the style and combat work in perfect harmony, feelingly uniquely Kena.