Jurassic World Aftermath is the most disappointing game I’ve played this year. It’s a great game and I really enjoyed playing it right up until the moment it ends. Unfortunately, all of its charm and ingenuity are completely overshadowed by the sudden realization that the game is unfinished, ending sold separately. I can’t remember any game’s ending having such a massive impact on my enjoyment of the entire experience, and that includes Mass Effect 3, Final Fantasy 7 Remake, and Fallout 3. There’s a lot of things I love about this game, but unfortunately, the way it was released and monetized makes it difficult for me to offer a strong recommendation for it right now.

Aftermath really does have a lot going for it, both for VR fans and fans of the franchise. It begins en route to Isla Nublar a couple of years after the events of Jurrasic World. You play a mercenary hired to escort a scientist back into her lab to recover a specific dinosaur genome. Naturally, nothing goes as planned, and you quickly find yourself being hunted by a pack of raptors as you navigate through the derelict remains of the Isla Nublar research facility. The disembodied voice of your scientist partner guides you as you travel through each wing of the facility on a mission to make contact with the outside world and arrange a rescue. 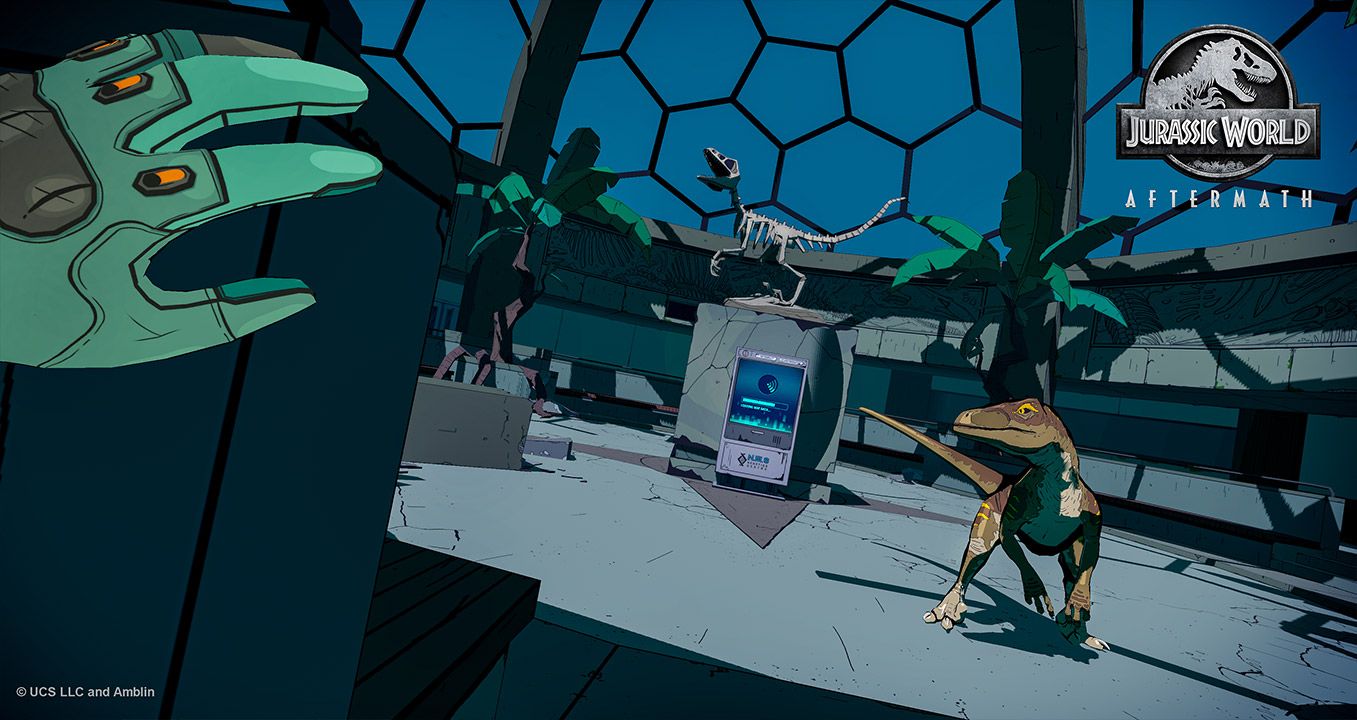 In terms of gameplay, the closest comparison I can make would be Alien: Isolation. The raptors pursue you relentlessly as you move from objective to objective through the facility, and there is no way to fight. Instead, you’ll be using the furniture and rubble to avoid line of sight with the raptors and you sneak your way through. Anytime you get spotted, you’ll have to quickly run and hide in a locker until the raptors lose interest and leave.

This type of stealth gameplay works so well in VR that I’m actually surprised we don’t already have a ton of other survival stealth games like it. Aftermath doesn’t rely on jump scares to build tension, which I appreciate. While survival horror games like Five Nights At Freddy’s: Help Wanted can provide massive adrenaline dumps in short play sessions, Aftermath keep you right on the edge the entire time. Though stressful, I had no problem playing through Aftermath from beginning to end in one sitting. It’s intense, but not overwhelming, which I think is a pretty perfect recipe for VR.

Aftermath also maximizes a lot of VR’s best features. The ability to peak out from under desks and check around corners adds so much realism and interaction to the experience. A lot of VR games engage our hands but don’t ask us to do anything with the rest of our bodies that we couldn’t do with a controller. Aftermath engages your body better than any other non-workout VR game I’ve played.

The game uses a cel-shaded art style that does such a great job of hiding the most common visual limitations of VR, like aliasing and poor shadow detail. Playing Aftermath is like walking through a comic book. I think it’s wise to avoid realism in VR, and going to the opposite extreme actually benefits Aftermath a lot. One of my favorite uses of the cel-shaded style in this game is the way that loud sounds are represented visually. When you slam a door or press a button, the sound is paired with a visual effect as it would be in a comic book. It’s pretty subtle, but it’s the kind of small detail that adds a lot to the total experience. Aftermath had me convinced that it was setting a new high bar for stealth games in VR, but unfortunately, the end of the game feels like running headfirst into a brick wall. The game begins in an atrium with five exits. You are then introduced to a map of the facility that makes it abundantly clear that you’ll be visiting each department one by one. If it isn’t clear enough how narrowly structured the game is, you are required to return to the Atrium and activate a switch to open each new area. Throw a switch, explore the new area, return to the atrium, throw the next switch, and repeat.

The first two areas introduce new mechanics that are only used in that zone. First, you’ll get a tool that lets you activate radios and electronic devices to distract the dinosaurs so you can sneak by them. Once you’re finished with this objective, that tool is never used again. In the second area, you’ll use a flashlight to blind dilophosaurus before they can spit on you. Again, once you leave that area you won’t need to use that mechanic again.

I think it’s perfectly fine to have one-and-done mechanics throughout the game, but the problem is that in the third area the game just stops introducing new things. The third area is basically the same as the first one, but without the power to distract. There’s no new mechanic to learn or tool to use. Once you complete the third area and head back to the atrium for the third time, the game ends. 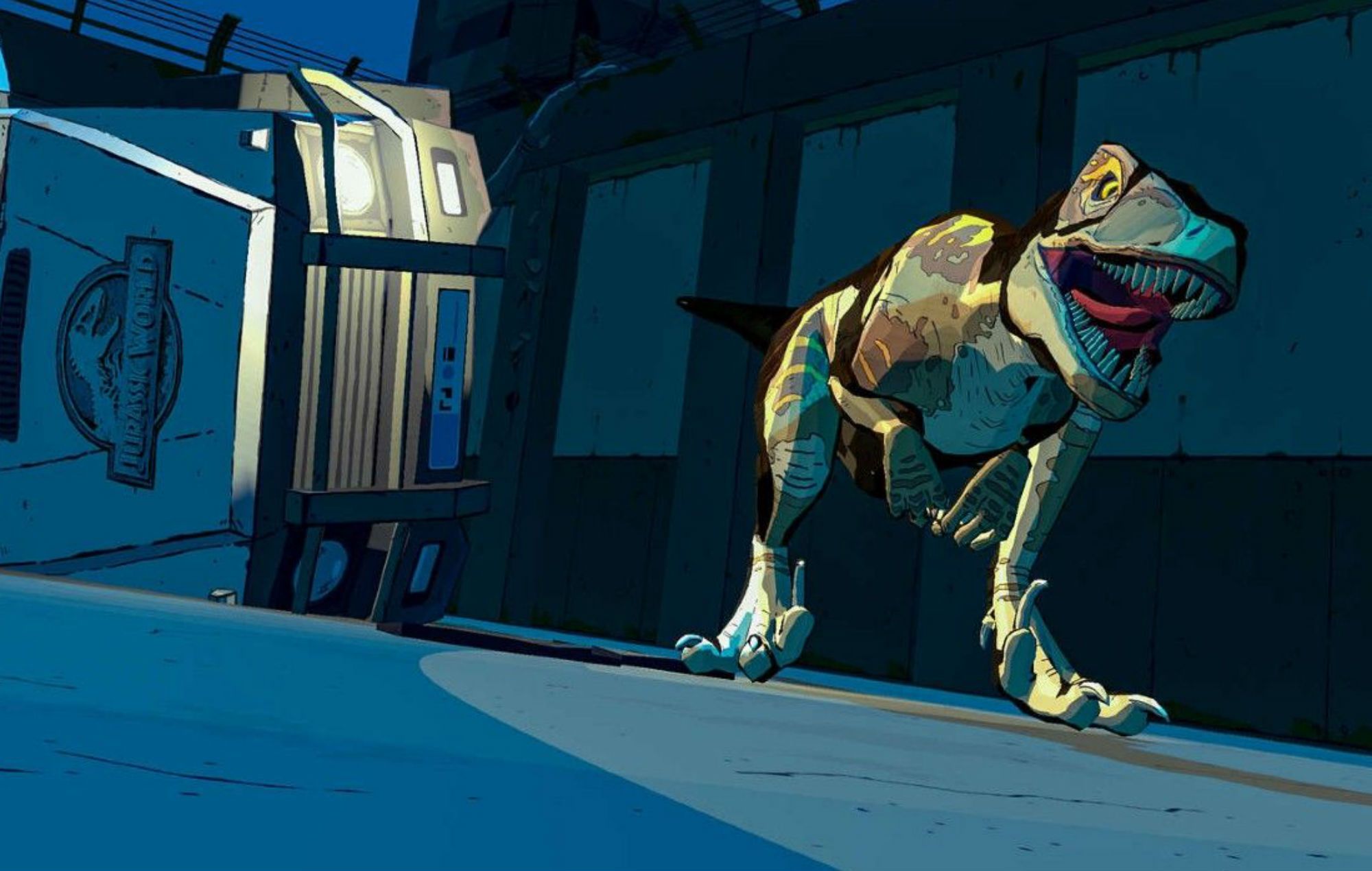 Unfortunately, the story doesn’t end. As I said it’s incredibly obvious there are two more departments that need to be explored, but it turns out the rest of the game won’t be available until sometime in 2021, and it won’t be available for free.

I’m not too interested in a “dollars vs. time played” value assessment type of critique, but I can’t help but feel like I just got hoodwinked by Jurassic World Aftermath. It isn’t advertised as episodic like a Telltale or Dontnod game. Rather, it feels like I’m simply being asked to pay more if I want to see the end of the game. I’ve never played a game that charged extra for the ending. I think there may have been a way to market the game as Aftermath: Part 1 or something like that, but it’s not.

Again, I’m don’t particularly have a problem with the price of the game or even the price of the DLC (currently TBD), but I certainly do feel like someone just flipped the lights on the middle of my movie and said sorry, the ending costs extra. DLC is typically an epilogue, something that happens when the story is over, but this feels like part of the game was removed and sold separately.

If you’re going to play Jurassic World Aftermath, and I think you should, then wait until the whole game is available. Finishing the story without the “DLC” is so disappointing.

Next: Vampire: The Masquerade Companion Review: Expanding The Darkness 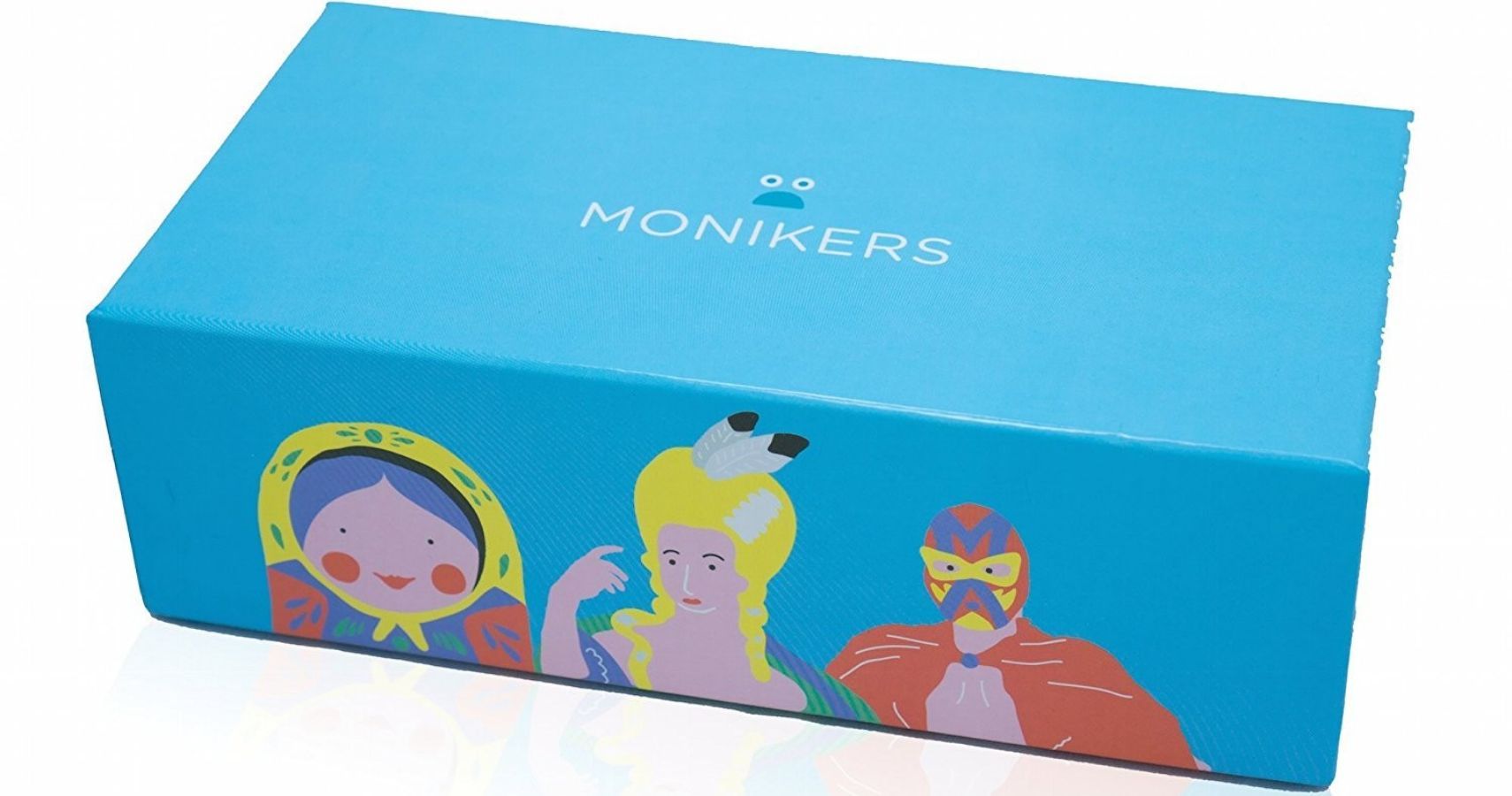