Much to-do has been made about Super Mario 3D All-Stars. The Switch collection throws together new versions of beloved Mario titles for sixty bucks, and on paper, it seems like a pretty good deal. While I have my reservations about that, I’ll put them to the side for now, because something about the collection’s been bothering me.

Without a doubt, 3D All-Stars’ port of Super Mario Galaxy is the flagship of this package. Running 60 FPS at 1080p, it’s a definite upgrade from the 480p Wii original I played as a kid. It’s Galaxy as I remember it, as opposed to how it actually looked, and that’s a magical feeling.

Or it would be, if a nagging question didn’t bother me while playing it. You see, while most people seem to be running with the line that this is an all-new version of Galaxy, I don’t buy it. Instead, I think this is actually an earlier project retrofitted into this collection, and sold off in America as a new product.

I’m convinced that this version of Super Mario Galaxy was not made for this collection. Instead, I’m of the belief that this is a new version of the China-exclusive Nvidia Shield port released in 2018.

Unknown to many, four major Wii titles were ported to the Nvidia Shield in China. In 2018, new versions of Zelda: Twilight Princess, Punchout, New Super Mario Bros. Wii, and Super Mario Galaxy were made available on the platform. As Eurogamer reported, the ports of these games were great, but a bit baffling. “The quality of the emulation and the effort put into it seems rather extreme when the end result is a limited release of four games […] only available in one territory,” wrote Thomas Morgan, “where Shield sales are likely to be microscopic.”

Morgan specifically wrote on the Galaxy port in his article, which he walked away very impressed by. If you watch footage of the game, it’s easy to see why – it looks incredible. Without a doubt, it’s the most visually accomplished version of the game to date. By contrast, the Wii original looks blurry, muddy, and slow.

So, why did Nintendo release these four games on the Shield in China – and with such great versions, to boot? It definitely seems like a suspect allocation of time and resources if those versions weren’t going to be universally available for a global player base.

This is where another interesting wrinkle comes into play. See, the Nvidia Shield is powered by the versatile, lightweight Tegra X1 chip, which allows for powerful gaming experiences in a lightweight package. It’s an impressive, albeit niche, piece of tech. However, the Shield isn’t the only system out there using the Tegra X1. There’s another consumer device on the market that’s more popular, more widely adopted, and more universally beloved.

That device is the Nintendo Switch.

To recap, Nintendo tapped either an external or internal dev to port Super Mario Galaxy to the Shield. By proxy, they built a version of the game that works around all the strengths and limitations of the Tegra. That same Tegra is what powers the Nintendo Switch, which is what this latest version of the game has just been released on.

Now, it would be easy to assume that the version of Galaxy in 3D All-Stars is the Shield port based on this alone. However, that’s purely circumstantial evidence, and we’d need a more definitive comparison to back this claim up.

Oh, wait, somebody already made one. (Thanks, Direct-Feed Games!)

Right off the bat, it’s worth noting that the Switch version actually looks worse. Even with full RGB enabled on my own console, my version of the game looks identical to the Switch capture here. That is to say, it’s a bit washed-out, brighter colors blend together, and there’s a general muddiness about the whole game. However, muddy colors on the Switch are a known issue, as a quick Google search will show you.

What about the actual texture quality and aliasing, then? When you watch this side-by-side, both versions of the game might look practically identical at first. Certainly, I think it’s fair to say that the Switch port is likely based on this Shield version. Take a look at this comparison. 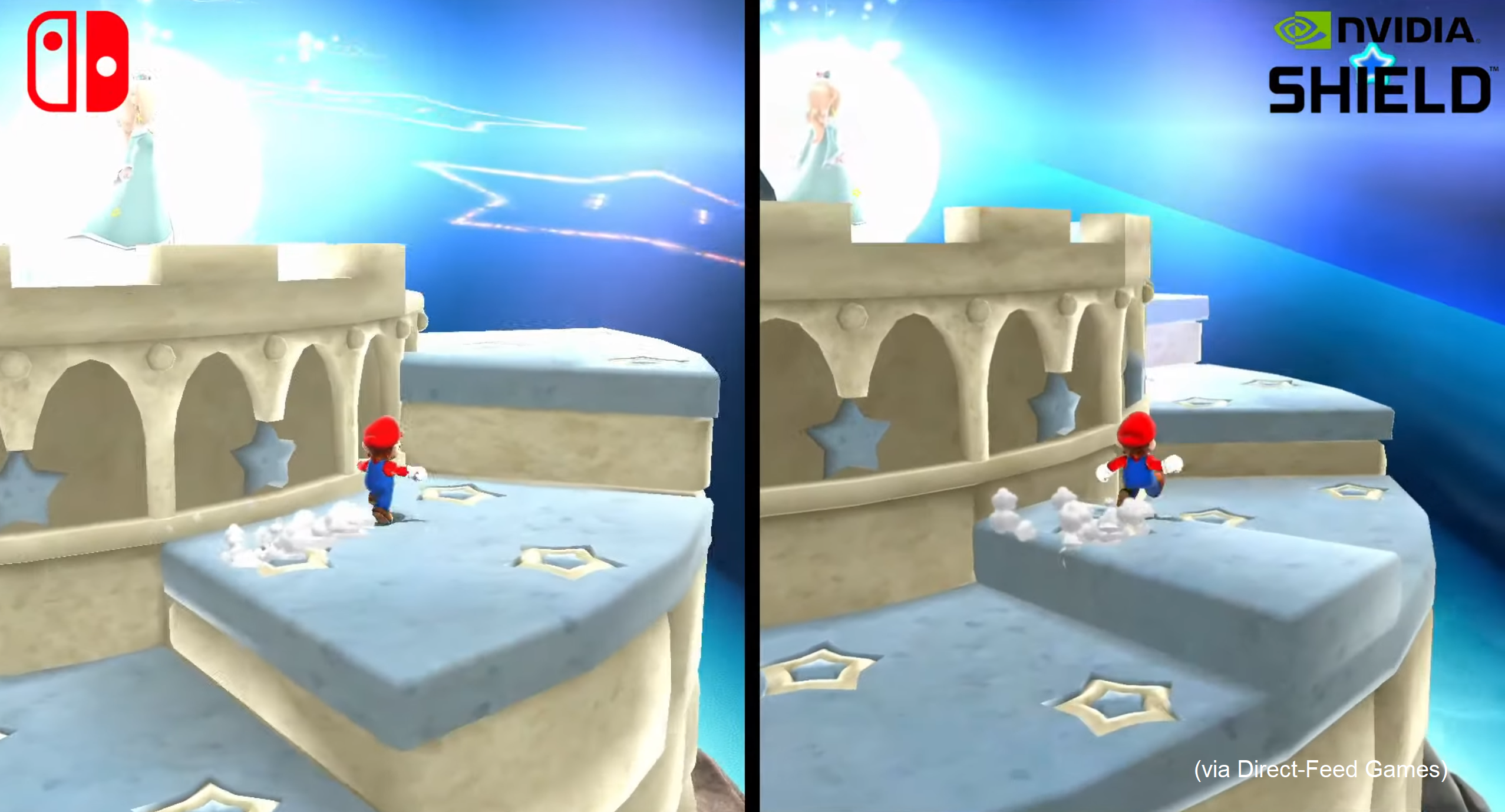 As you can see, the textures and reflections look almost identical. However, you might notice that in the lower right-hand corner of each screenshot, there’s a bit more detail on the Switch version’s stair textures. Of course, that can be chalked up to the aforementioned color issue with the Switch. The following scene with Rosalina gives us a better view of just how vastly different the colors in both versions are. 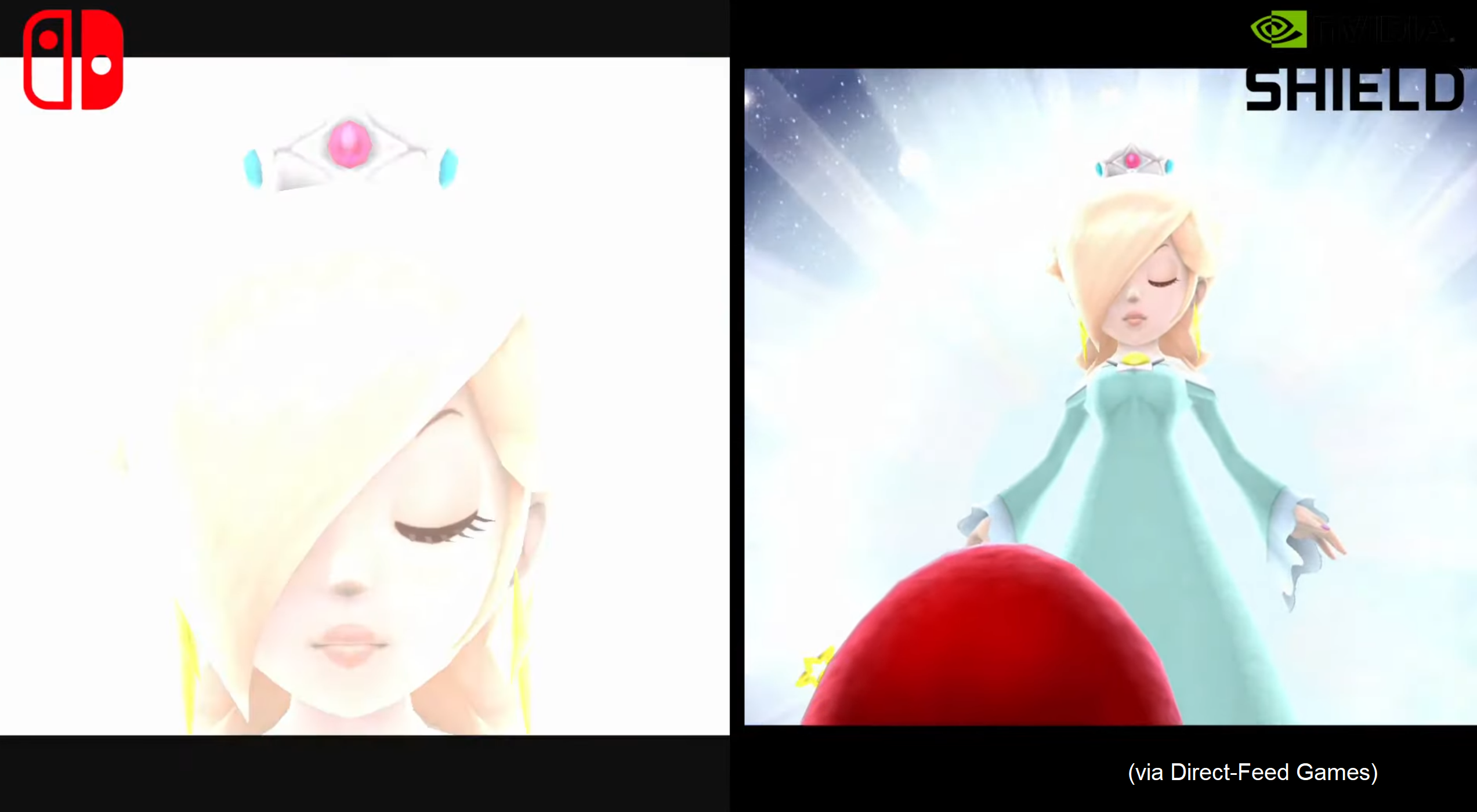 Note that Rosalina is a bit more washed out on the Switch. The definition on her hair blends in with the light behind her, resulting in a frankly ugly picture quality. However, despite that clear visual downgrade, one last comparison shot complicates matters just a bit more. 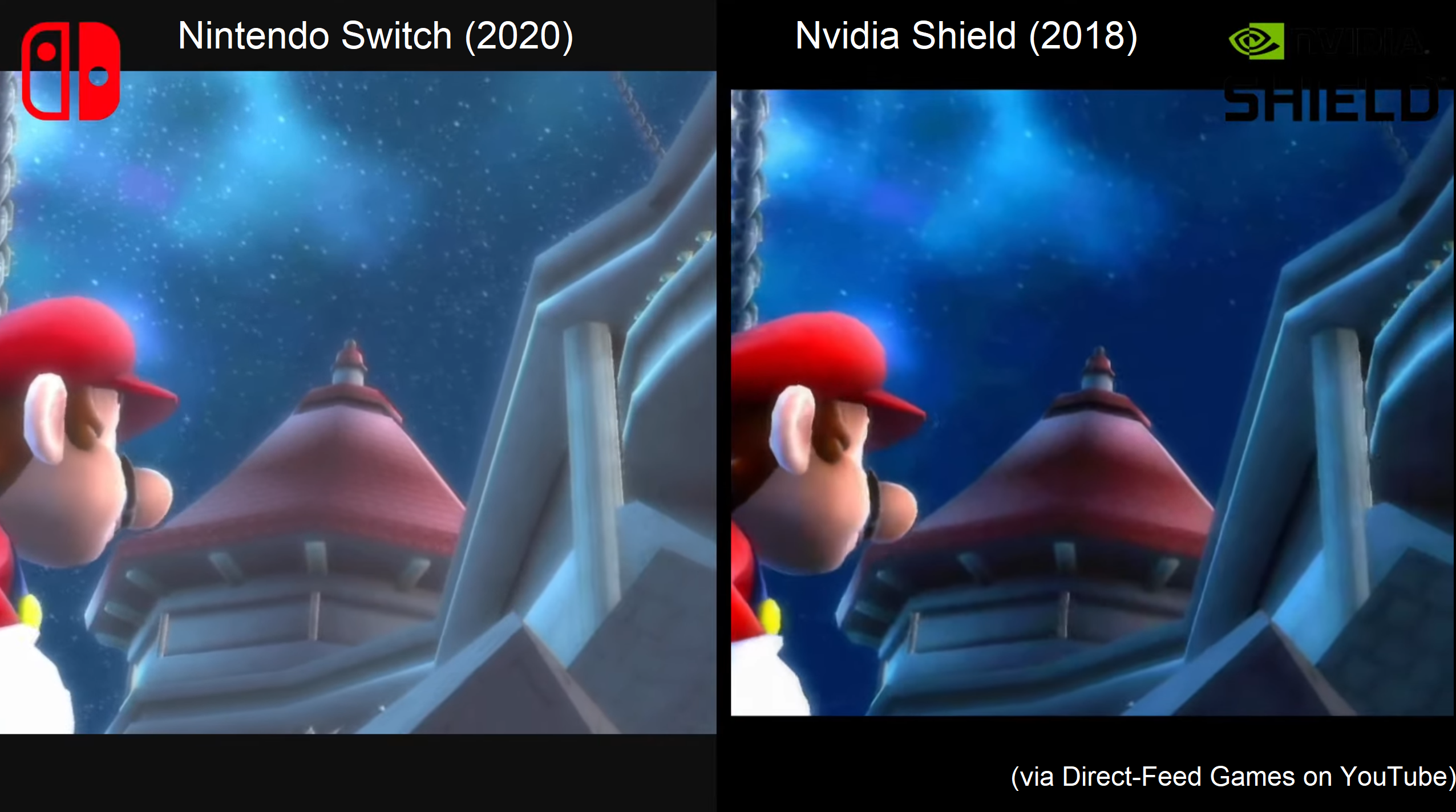 While you might not notice very many differences at first, take a closer look at the tower and the brick to the right of Mario. Note that Shield version of the roof is lacking tile textures, while the Switch version definitely has them. Meanwhile, the bricks in the lower right-hand-corner are more muddy on the Switch, and more defined on the Shield. In addition, the skybox in the Switch version is definitely more defined.

So… what does all this mean?

Without any official word from Nintendo, it’s impossible to say whether or not this is the same version of the game that released in China. While they do have subtle differences, they look almost the exact same and perform identically – right down to the Switch featuring the Shield’s control scheme. It would be strange for Nintendo to put all that time and effort into a Shield port, then do an entirely different version on the Tegra X1 for this one collection two years later.

So, what’s the truth here? Unfortunately, anything I can say will just be speculation. However, from the facts in front of me, it seems an awful lot like Nintendo could’ve used the Shield as a testing ground for future Wii ports. It would make sense to put out four different types of game onto a small platform in one region as a test. That way, they could put the powerhouse behind the Switch to the test, without risking any damage to their carefully curated brand.

And as far as making it exclusive to China goes? That’s easy – Nintendo wasn’t an established brand in the country for years, so there wasn’t as much of a hit to their reputation should the ports prove to be subpar. They could write it off as a novel way to bring Nintendo to China, much like the iQue Player, then go about their merry way.

If I were a betting woman, I’d wager a few bucks that the version of Super Mario Galaxy in 3D All-Stars is based off that Shield port, and isn’t an entirely new port made for the collection. However, until Nintendo makes any sort of official statement about, we’ll be left in the dark.