Knee-deep snow and miles of unforgiving terrain stretch as far as the eye can see. While every part of this winter wilderness will slowly chip away at myyour health with it’s low temperatures, nothing in Monster Hunter World: Iceborne is more dangerous than the creatures that prowl around every corner.

”We wanted it to feel like the further in you get into [Hoarfrost Reach] the colder it gets, the traversal itself gets more challenging,” Monster Hunter: World producer Ryozo Tsujimoto tells me. “The further you get you’ll realize that this terrain, this whole area, is a place that people don’t inhabit.” 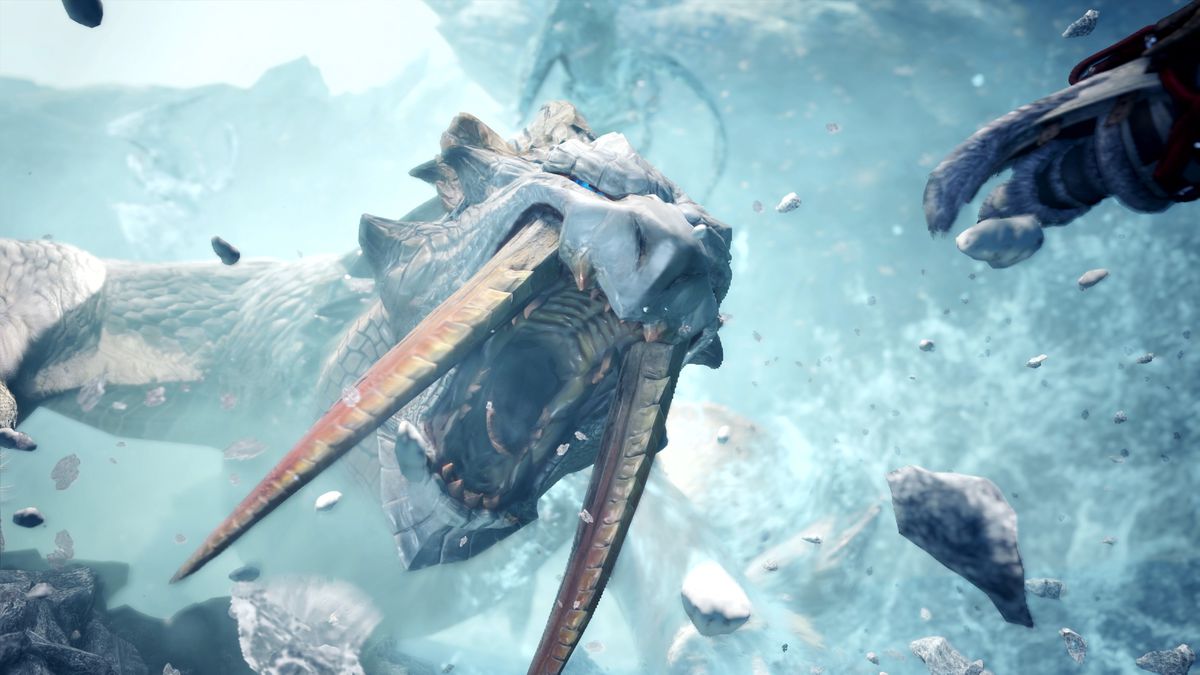 Everything about Iceborne captures the entire design philosophy behind the Monster Hunter franchise: the further you get the harder the hunt becomes, both because of the increasingly difficult challenge each new monster provides and the more subtle dangers the freezing environments pose. Iceborne’s frosty Hoarfrost Reach itself is a testament to that.

Monster Hunter World: Iceborne is a dance with death

Capcom knew it needed to create an environment that had a stark contrast from the jungles and deserts of every other Monster Hunter: World map. The team behind Monster Hunter 4 Ultimate had already taken several trips to various snowy locales in Argentina, so Tsujimoto wanted to take advantage of that research and create an expansive environment with snow using modern technology.

Tsujimoto and team also wanted to make the Hoarfrost Reach something players could explore; and the deeper they got, the more difficult it became to actually fight on the terrain. Whereas the base Monster Hunter: World game was split into seven smaller regions, Iceborne’s map is just one large area equal to the size of multiple maps.

”We focused on just one map because we wanted to give the player the feeling that they’re doing a deep investigation of one area,” Tsujimoto, who had started working on Iceborne after Monster Hunter: World launched in 2018, said. “The further they go in the more they discover, in terms of both monsters they see and environments they find. We felt that would get lost if you were jumping around different fields.”

Hoarfrost Reach isn’t just miles and miles of unrelenting snow;, it’s got hot springs, deep caverns, and imposing cliffsides. It’s also full of monsters, both new and old, who have adapted to living between hard stone floors and sharp icicles. Creatures like the Viper Tobi-Kadachi and Fulgur Anjanath come redesigned with new abilities and behaviors that match their environment while new beasts, like the charging, antler wielding Banbaro and the Beotodus wyvern that can dive through the snow like a shark bring completely new fights to World. 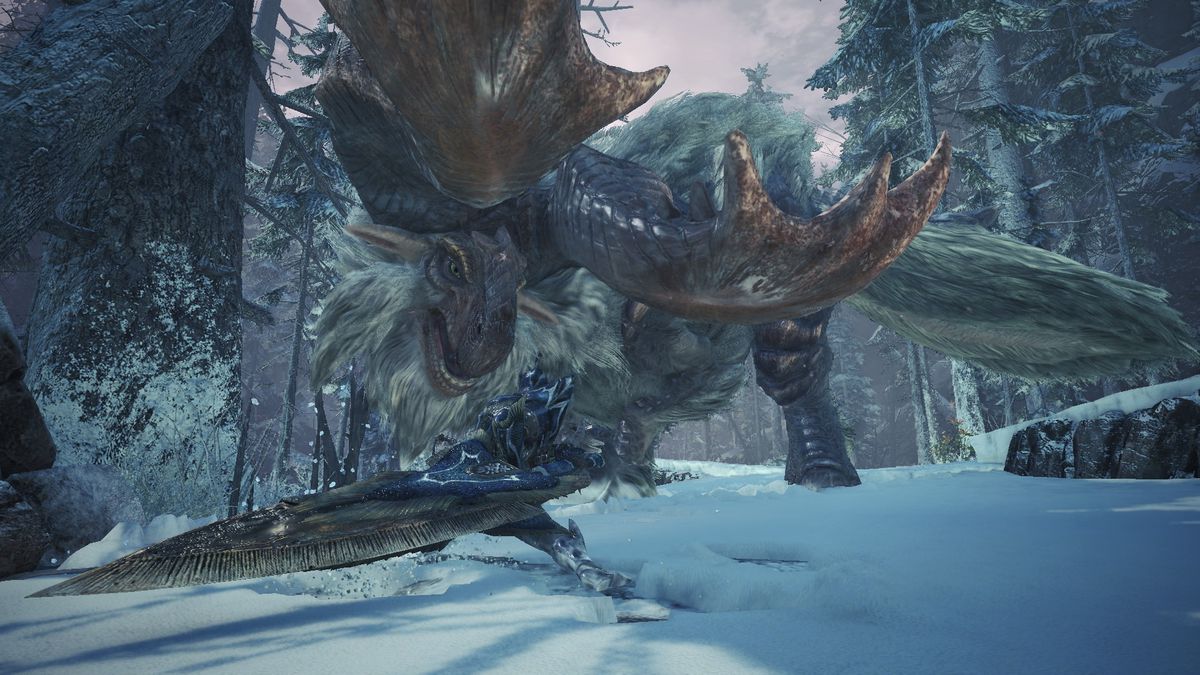 ”After looking at our roster in World, we realized that all of our monsters are set into that kind of dryer environment and we wanted to try to see what we could come up with a colder space,” Tsujimoto said. “So that’s where we took the idea of Iceborne. Let’s take a look at a colder climate and see what kinds of monsters would fit.”

One of the most snow-adjacent monsters is Iceborne is the Banbaro, a giant, furry dinosaur-like creature with huge antlers that can toss trees and rubble around like pebbles. He’s a charge monster, so it’s main method of attack is running you down and bashing you into the ice.

”It wouldn’t be interesting if that was the only element of the monster, we had to do something more with it,” Tsujimoto said. “The general idea of Monster Hunter: World is all about the monsters interacting with their ecosystem. So we decided to add something additional to his charging where it takes it’s antlers and picks up boulders or trees along the way as he’s charging forward. It actually expands the attack radius.”

Banbaro’s attack range and effects change depending on what it picks up in its antlers. Rocks do more damage than trees, for example. Tsujimoto said that it was a simple design, but it was Capcom’s way of making an uncomplicated monster for the early parts of Iceborne that both incorporated the snowy environment and Iceborne’s newest gadget, the Clutch Claw. It’s a grappling hook-like item that can help you latch onto a monster and redirect it’s movements.

”We wanted to make sure that the Banbaro would be a bigger monster so that you’re able to utilize the Clutch Claw a more easily,” he said. “Obviously because this a cooler climate it has to have a ton of fur on it as well. And then because it was so big we had to match the overall design to make it look like the antlers are designed to pick things up. They’re designed in a way that logically makes sense that it’s capable of digging into the ground and picking up boulders.” 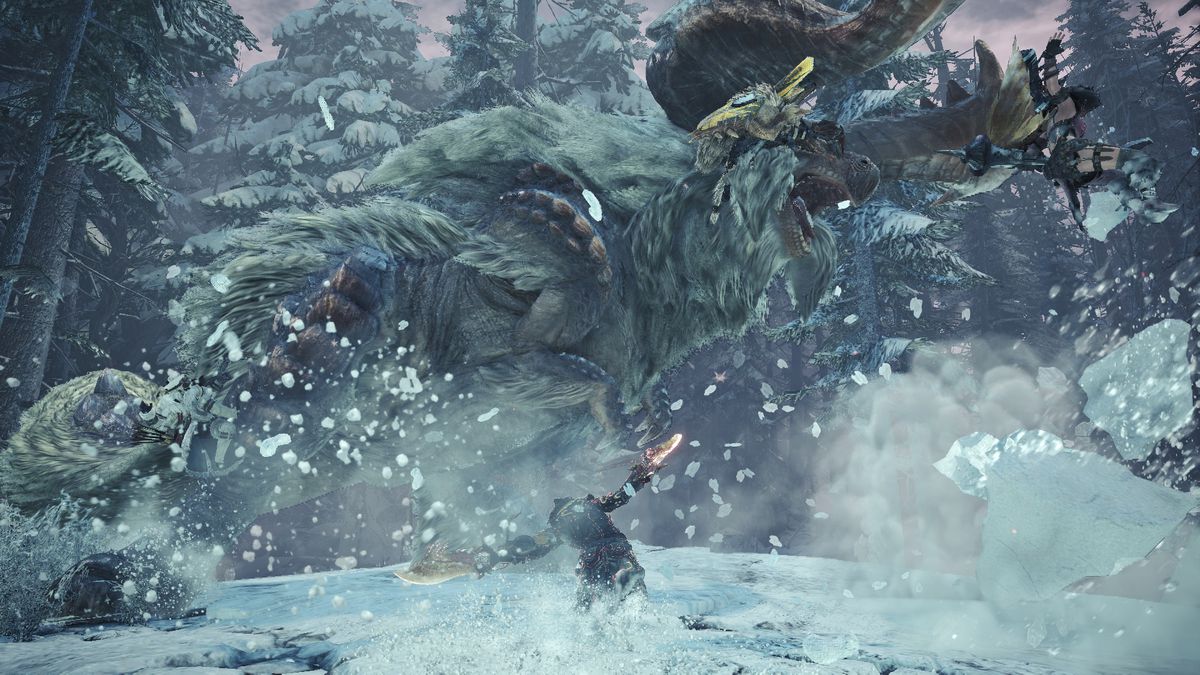 Iceborne isn’t unique compared to other expansions in the Monster Hunter franchise, Capcom didn’t change how it approaches monster or map design due to the breakout success of Monster Hunter: World. They still design new monsters based on how they play and interact with the ecosystem, just like every game and expansion before Iceborne.

”In previous installments of the franchise in Japan we usually release a ‘G’ expansion for all of our titles. That was the basic practice that we took once we had the foundation, we always built off of it to create something new,” Tsujimoto said. “So this time around with Monster Hunter: World, because it was a simultaneous global release, we figured we’d take the same approach. We have this foundation and worldwide success, so we made an expansion with the same idea. We’ll just called it Iceborne.”

Monster Hunter World: Iceborne is out today for Xbox One and PlayStation 4, with a PC release coming January 2020.