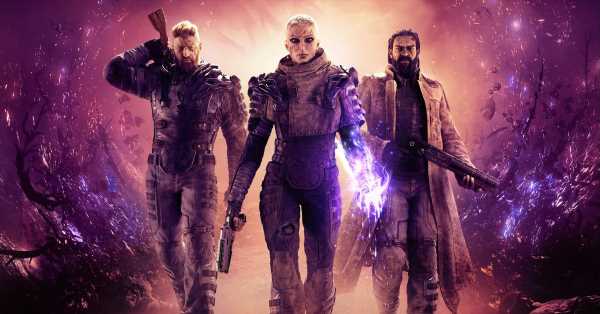 The gaming industry is in an incredibly awkward place right now, stuck between the old system of selling hardware by pushing exclusives, and the new reality of players expecting their entertainment to travel with them across different platforms.

Today, the walls between the PlayStation, Xbox, Nintendo, and PC gaming ecosystems have never been thinner, but that has led to some unexpected problems. Nowhere is the tension more apparent than the issue of cross-play and cross-save support in games.

This is an increasingly frustrating problem

Cross-play is when you’re playing a game on one console or the PC, and you can play against folks on another platform. Cross-save is when your in-game progress and gear can be accessed on more than one platform. So if you get to level five in a game on your phone, and you begin to play that game on your Switch, cross-save support means you’ll be level five there as well. If you can invite someone playing on Xbox to join you, that means the game has cross-play. Makes sense?

The problem is that the implementation of these ideas is almost always more complicated than expected.

Take Destiny 2, a free-to-play game. Cross-play is coming later this year, and currently, you can link accounts to enable cross-save. That way you can play on PC and then pick up where you left off on PlayStation 5, but you can’t play against someone on PC while you’re on PlayStation 5 — at least, not yet. And if you own an expansion on one platform, but you want to move to another platform? Tough luck, as the quest content in each expansion can only be played on the platform where you paid for it, even though your season pass can be used anywhere. It’s confusing as hell!

See, you can bring the stuff you’ve bought, just not the virtual cash, or the expansions. It’s all perfectly logical!
Image: Bungie/Activision

Then you have Outriders, which offers cross-play (although it was buggy at launch), allowing you to play with your friends on different consoles. It’s also free through Game Pass, although not on PC if you have Game Pass Ultimate. There is also cross-save support between console generations, so players who start on PlayStation 4 can move their character to an eventual PlayStation 5, and Xbox One players can do the same when they get an Xbox Series X, but there’s currently no way to move progress from one platform to another.

The upcoming Diablo 2: Resurrected will also offer cross-save, so you can play on your PC at home and then take the game on the road if you have a Nintendo Switch. Cross-play isn’t supported at all, though, so you still won’t be able to play with friends on other consoles.

Cross-play and cross-save are both becoming more popular, but it’s not always clear how each game uses these terms and what will or won’t be allowed. When Fortnite launched on Nintendo Switch, no one realized that accounts that have played on PlayStation 4 couldn’t be used on the Switch at all, and you could lock yourself out of playing on the PlayStation 4 if you’d already used that account on your Switch. In that case, players found out they’d been locked out of playing on at least one of their systems based on a rule they were never told existed until it was too late.

Then there’s Warframe, which lets you bring your PC account over to your Switch, but you can only do so once, and it basically splits your account in two. Once you’ve made the jump, the progress you make on Switch won’t carry back over to PC, or vice versa.

When you find a game in which both cross-play and cross-save actually work, allowing you to bring characters and progress from platform to platform while playing against anyone else on the other consoles? It’s absolute bliss, even in games that aren’t exactly setting the world on fire.

Is this ever going to get better?

Yes. The situation with cross-play and cross-saves has already improved substantially since the early days of gaming, when each console was a completely secure walled garden, and there was no overlap between players or progression between them.

Those walls have crumbled, and they’re going to keep crumbling. Being able to play Warzone against my friends on PC when I’m on my Xbox Series X and having my progress saved to the account and not the console is something that would have been unthinkable a few short years ago.

Other forms of entertainment don’t get distributed in walled gardens in the same way. Imagine your Netflix subscription only working on certain TVs, or your Kindle app not keeping your bookmark if you switch from iOS to Android. You can almost think of services like Netflix or Disney Plus as their own consoles, but the price of admission is the subscription fee, not hundreds of dollars for a box that sits near your TV.

Video games as a business rely on specialized hardware that was never meant to be profitable on its own; the sale of games and digital content is baked into the business strategy. This presents a problem if each game becomes playable on any platform, and progress and purchases are locked to a player’s account, not platform. Sony, Microsoft, and Nintendo aren’t selling you hardware, they’re selling you a store, and there’s a very good reason Walmart won’t let you exchange something you bought at Amazon.

This is why Microsoft is trying to get ahead of the pack by focusing on services instead of hardware, and unsurprisingly, Microsoft’s Game Pass is already the service that’s the most like Netflix. If Sony isn’t feeling the pressure to match Microsoft’s features on Game Pass with its own PlayStation Now offering yet, it will be soon.

Whoever figures out the best way to get players what they want is going to have a sizable advantage over everyone else, although, by definition, every major company is going to have to learn to work together to some extent if cross-play and cross-save are to become standard.

As those companies try to figure this one out, however, expect the confusion to continue, and be sure to do a lot of homework before you make an assumption about what these words mean. This is a time of transition for the industry, and things are moving in the right direction, but for now, this temporary mess is still a mess.