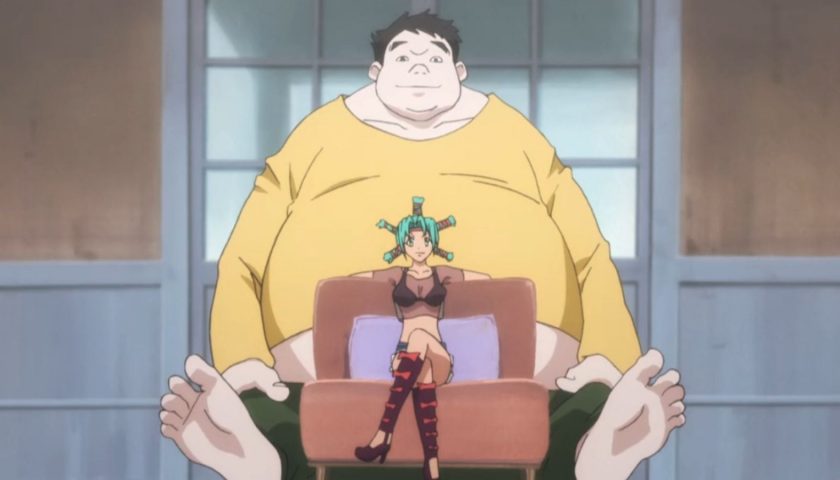 Hunter x Hunter is widely renowned as one of the best anime ever made. It tells a deeply compelling story over the course of a whopping 148 episodes and somehow manages to keep its pacing consistent throughout all of them – well, almost all of them. Unfortunately, Hunter x Hunter’s sixth episode is woeful.

I’m talking about the 2011 version of the anime here, meaning that episode six is An x Unexpected x Task (don’t pronounce the x). For those of you who are unfamiliar with the specifics of the series, or are just a little bit hazy on the details, this episode focuses on Gon, Killua, Kurapika, and Leorio as they try to pass phase two of the Hunter Exam. After running almost 100km with no discernible end goal for phase one, I highly doubt any of the applicants know that they’re about to meet Menchi and Buhara, Gourmet Hunters who intend to make them cook a pork dish in order to progress.

It’s a weird episode. Everyone taking the exam immediately says this is either easy or ridiculous, before setting off to kill some large carnivorous pigs with weak spots on their foreheads. The only good part of this entire episode is that Killua incapacitates a pig by kickflipping his skateboard into its skull, which would be stupid if not for the fact that Killua – the best character of all time – does it. Killua can do anything. 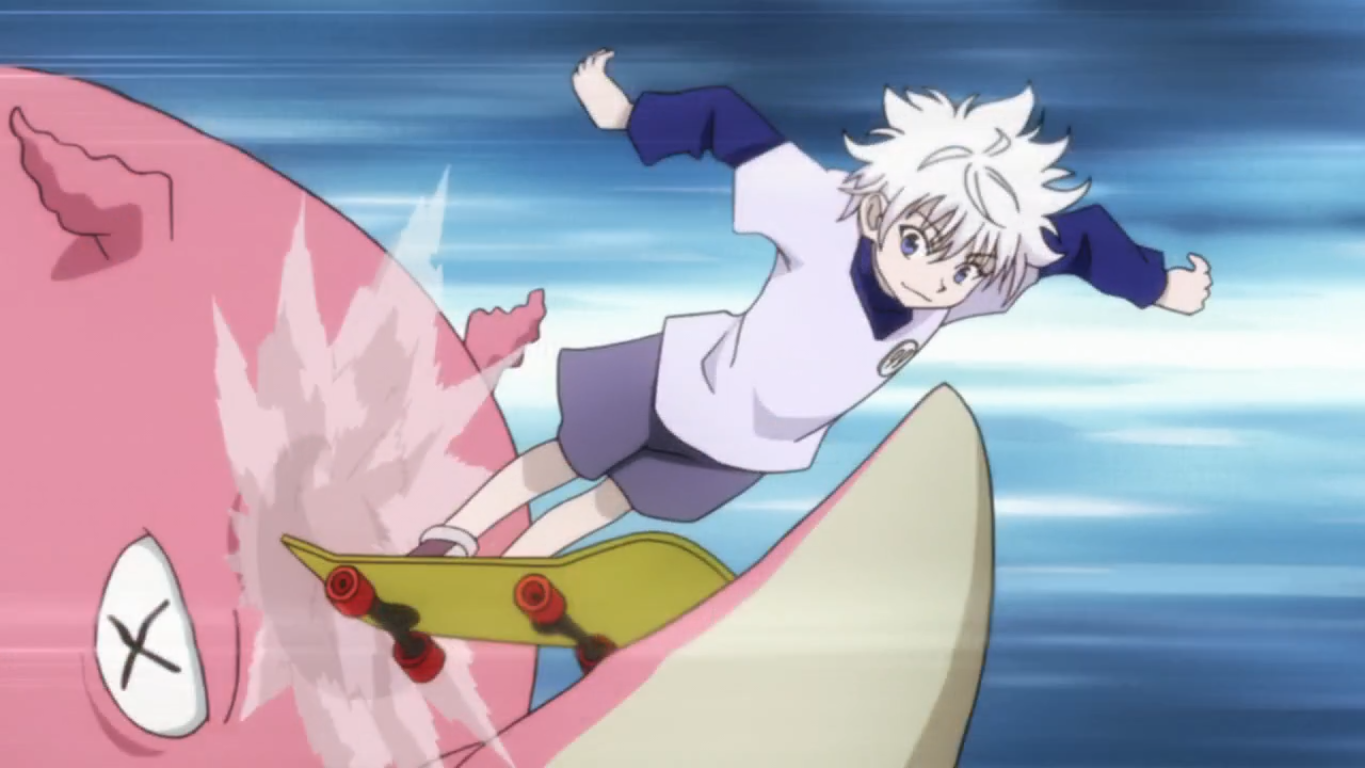 Once all of the applicants have caught themselves a pig and cooked up a nice pork dish, Menchi goes on to fail every single one of them for culinary inadequacy. Oh, and Menchi is also the first woman in the series since Aunt Mito and Gon’s granny from episode one. She’s wearing a bra and short jorts and spends the entire time berating everyone. Buhara, her companion, is impossibly large and likes to eat, because that’s some real grade-A innovation in narrative. He eats literally hundreds of pigs in a single sitting – that’s his whole character.

Aside from all of the lazy tropes here, the episode in general just doesn’t really fit the series at large. It’s difficult to start a series off on the right foot, but Hunter x Hunter somehow managed to kick things off with real flair in its first five episodes. I mean, it’s probably because it learned from the 1999 version of the anime, in which it takes Gon three episodes just to leave Whale Island. It’s worth noting that the sixth episode – the one we’re on about here – also spans multiple episodes in the original series, so thank god it was at least somewhat condensed for the newer one. I still reckon it should have been cut entirely though.

I mean, I get it, sort of – there are all different kinds of hunters, from Blacklist Hunters to Ruins Hunters, to Jackpot Hunters and Disease Hunters. It isn’t too far-fetched to assume that Gourmet Hunters are a thing, looking for the tastiest and most nutritious food in the world – after all, this episode does evidence the amount of effort necessary for obtaining a Spider Eagle egg, and it’s certainly not something any ordinary person would be able to do. Still, it feels a bit weird – you want to hunt the most notorious criminals in the world and you’ve got both the brain and brawn to do it? Cook me a pork chop. Nope, wrong texture, better luck next year. The motive being disguised as attention to detail doesn’t quite land when the stakes are this high, and given what phase three of the Hunter Exam entails – a fight to the death against, you guessed it, some of the world’s most notorious criminals – well, part two just looks a bit stupid, doesn’t it? 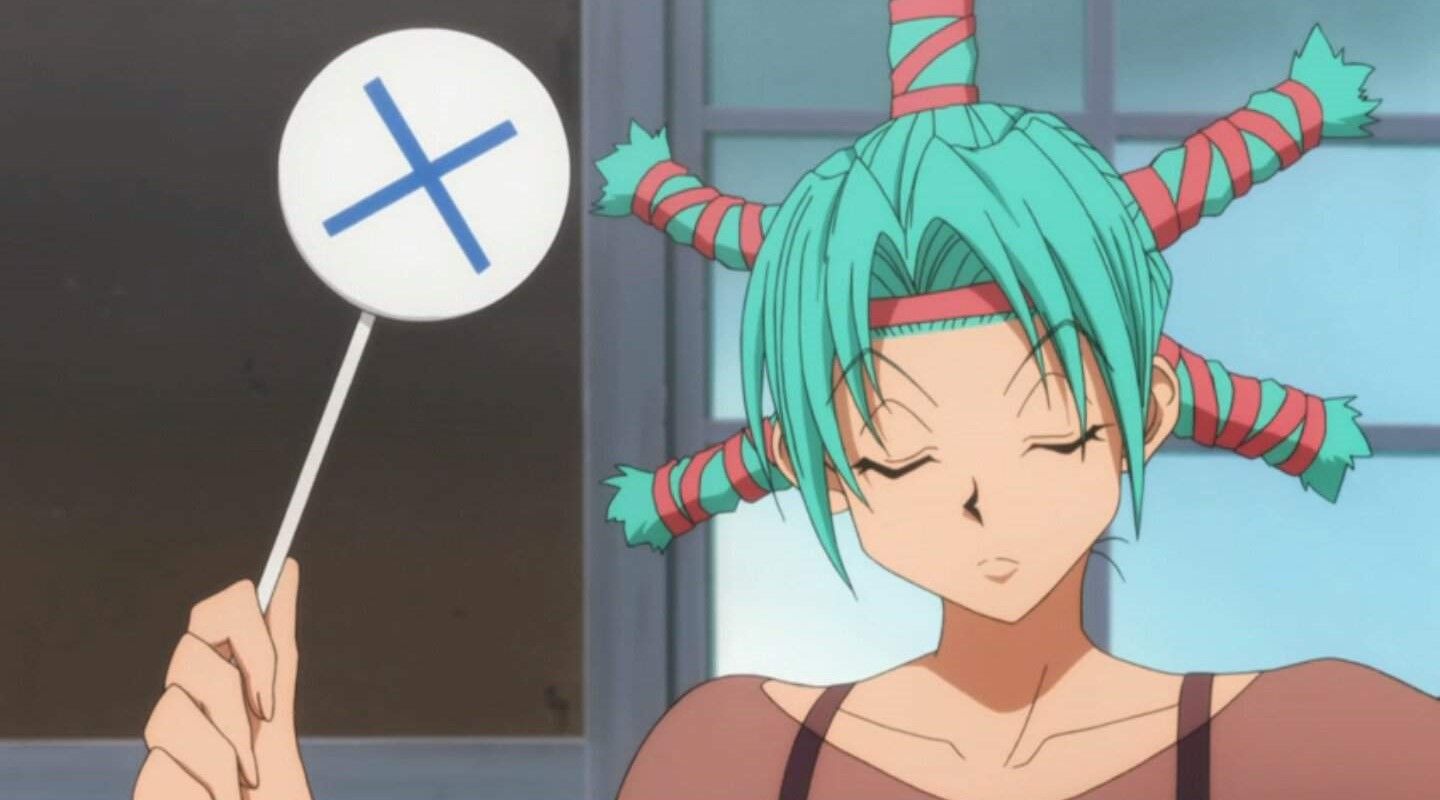 The whole episode is just silly. Third woman in the show after six episodes? Check. There are literally hundreds of applicants in the Hunter Exam and yet none of those we see are women. Fat guy who eats loads of pork and does nothing else? Also check. Stupid insular subnarrative with barely any stake in the overarching one that exists for five episodes before and 142 after? You guessed it: check. Episode six is genuinely awful.

I love Hunter x Hunter. I’ve seen most episodes multiple times and have recorded several podcasts about it. I even spent hours writing this comprehensive breakdown of why Nen is the best magic system in fantasy history. When I say episode six is indefensible, it’s because it truly is. In my own head, episode six is just Killua kickflipping off of a pig’s head – the rest of the episode doesn’t exist, except for maybe Gon being able to smell wind for the third time in the series, because that’s hilarious. Killua smells death and Gon smells wind – that’s why they make a perfect team. Anyway, this episode is total rubbish, if you’re watching for the first time, skip from episode five to seven – the only thing you need to know is that there are only 42 applicants left after phase two, which is better than zero but also far too low given the nature of this stupid, ridiuclous, nonsensical task. Cheers.

Next: Closed Hands Interview – Exploring The Aftermath Of A Terrorist Attack 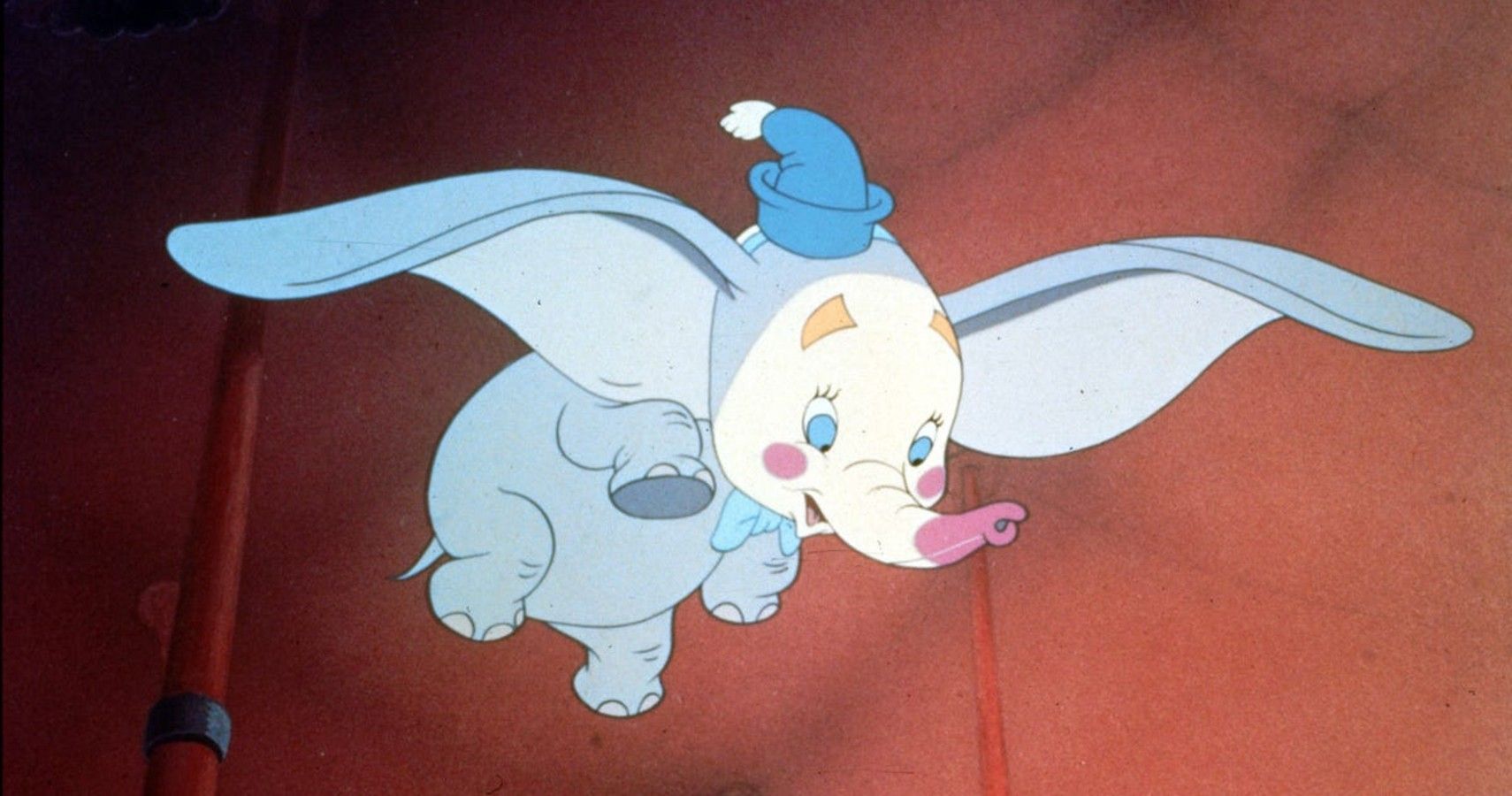 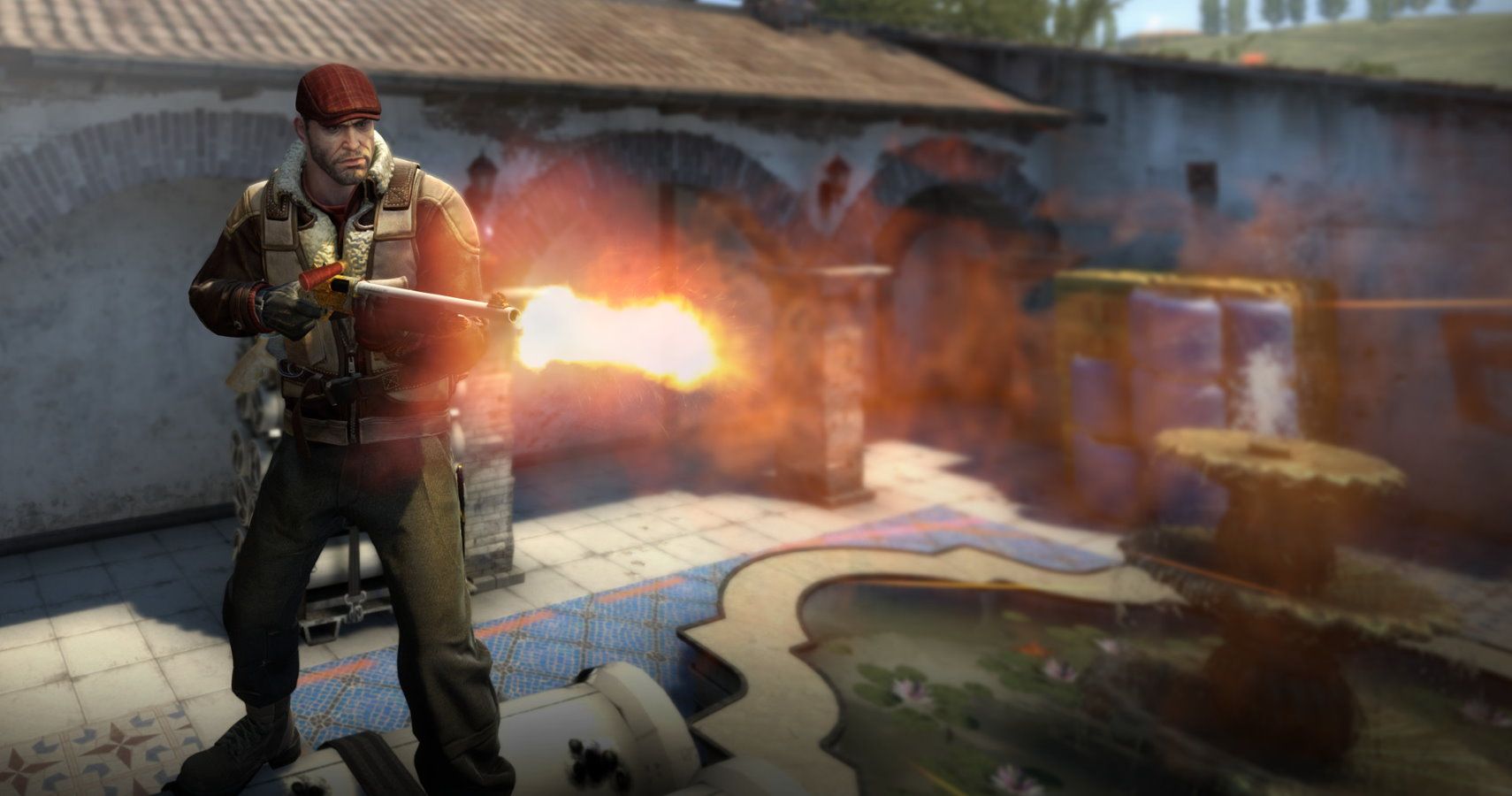 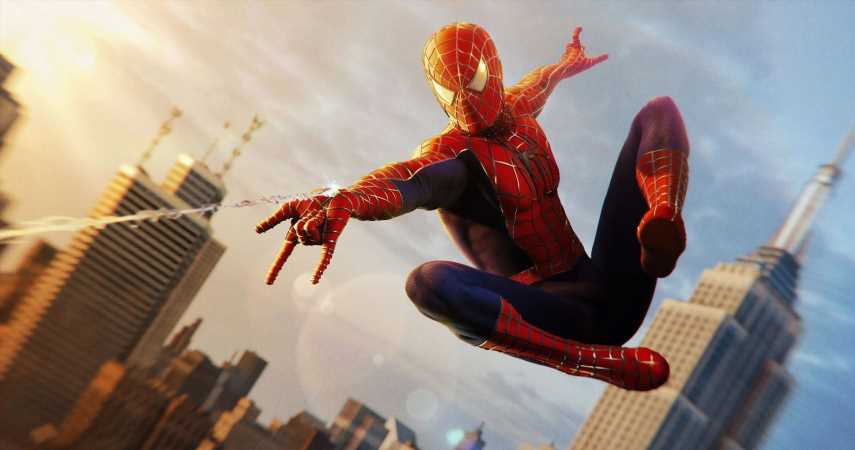 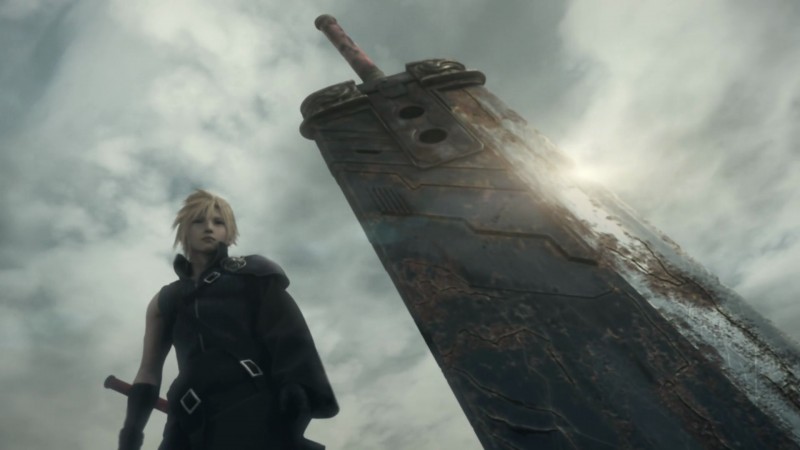