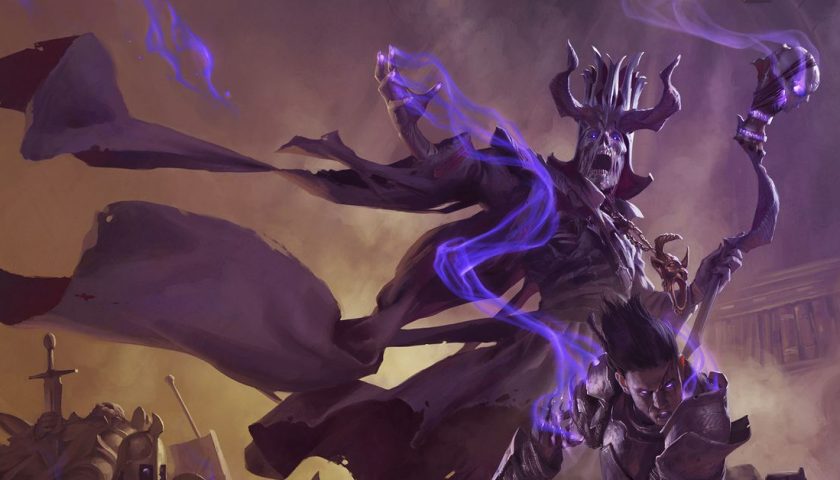 Bethany Dillingham has been playing Dungeons & Dragons since the early ‘90s, but she was having a hard time trying to find a new game in 2018 when she hopped on the virtual tabletop platform Roll20. She found there were so many people trying to get into games that she couldn’t get a slot. Then she saw the section for pay to play games, hosted by professional Dungeon Masters (DMs), that typically cost between $5 and $25 per session.

Dillingham was working as a bartender at an Olive Garden in Goldsboro, NC at the time, and that side hustle quickly turned into her main job. Now she runs about eight to 10 games a week, charging six to seven people $15 each for four hours of 5th edition D&D.

“I think that being a storyteller is an art form,” she said. “It’s the same as a guy playing a guitar at a concert, or a painter. If you’re telling a good enough story that people are going to want to come back to, then they’ll pay for it.”

Next to Dungeons & Dragons, Pathfinder 2nd edition remains one of the most-played game systems on virtual tabletops like Roll20.
Image: Paizo

A growing number of gamers looking for a more creative way to make a living in the gig economy have turned to running games professionally, something that’s been made easier by the prevalence of technology like Roll20 and Foundry Virtual Tabletop — and the increased interest in the hobby sparked by Stranger Things and Critical Role.

“A lot of my clients come from small towns, or they’re a little socially awkward and don’t feel comfortable going to a game shop, so they try to find a game in the comfort of their own home,” said Christopher Rondeau.

Rondeau was looking for a little extra cash while working for minimum wage selling hot dogs and beer at event venues in Los Angeles. He started his first paid game in December 2017 after finding players through virtual tabletop forums. Rondeau said he started DMing full-time just three months later. He’s now run about 40 games for players from countries including Russia, Germany, Italy, and South Africa. His calendar features seven games each week. He charges $60 a month for two-hour weekday games and $90 for three-hour weekend ones. No matter where they’re from, Rondeau said his players tend to quickly mesh.

“A lot of people who are actually very different find this common ground through gaming,” he said.

Trent Harms had spent a year and a half running games part-time at his local gaming store in Winnipeg while he was in college, receiving $3 per person per session. When COVID-19 hit, he dropped out of school and began running games online full-time, charging $15 per person. He’s also found his players tend to get along well, regardless of their background.

While they can be helpful, players who know the game’s rules very well and have strong opinions can also be a source of frustration, which is why some DMs try to lay down policies about mechanics challenges.

“I encourage them not to bring up anything unless it’s really serious until after the game is done,” Dillingham said. “I find that correcting somebody makes them feel bad when I do it in front of other people and, conversely, when I’ve made a mistake, it hurts my feelings and it hurts my image for my players.”

A “session zero,” where players and the DM gather to set expectations and rules, is recommended before starting any roleplaying game. Paid DMs typically offer them free of charge.

“We need to make sure you are playing as a party,” Rondeau said. “This isn’t an individual game. You are one protagonist out of many. I’ve had parties come in where they’re used to drinking a lot during their sessions, and then by hour three, nothing productive is done. Having the session zero really fixes a lot of that.”

Depending on their experience levels, DMs can also work with players to build their characters.

“There’s some players who want to be self-guided and I’ll just say ‘Here’s the world. Go explore,’” Harms said. “If you want to come to me and say ‘Here’s my idea,’ I’ll spend an hour off session working with the player and helping them build that character. I think that’s one good way to start building a relationship with your players.”

DMs can even create custom content for their players. For instance, Dillingham recently used Tasha’s Cauldron of Everything to help design a custom template for a player who wanted to start the game as a wereboar. She said she particularly likes running games for new players who have fewer set expectations and think of a character first before considering the mechanics.

“They have the best imaginations,” she said. “They have an idea in their mind of this wonderful, colorful character who is all personality, and they don’t know enough about the mechanics to try to really make their character as powerful as they can be.”

Rondeau said that when he first started running games professionally, most of his players were looking for an experience like Critical Role. Now he’s seeing even more educated players with strong opinions on narrative structure and what makes a good character.

“Often those opinions can cause a little tension between me and the player,” he said. “I have different perspectives. It’s not a bad thing overall. I’m glad people are appreciating the art form and everything it provides.”

Actually making money off of that art can prove challenging. Dillingham said she regularly has players show up for one game and then vanish without even telling her why. She used to offer one game free but stopped doing that and now directs prospective players to watch her DMing on YouTube.

“You are relying on everyone to show up to play your game,” she said. “Every time somebody can’t make it, I lose that money. If the game can’t continue because too many players are missing, I lose a substantial amount of money.”

Rondeau lost nearly 65% of his players when the pandemic started because they lost jobs and were cutting down on expenses, but he’s since gained new ones. He’s managed to increase the amount of money he makes by contracting some of the work, like making maps and art, giving him more time to focus on crafting the narrative.

“Now I have a list of resources that really take my prep work to a quarter of what it once was,” he said. “I was doing all the work myself for that first game. I was trying to draw everything myself. I was trying to build everything from scratch. You spend a couple bucks and save yourself several hours.”

His business has proved so successful that he was accepted into the Tulsa Remote Program, which pays relocation costs plus a monthly stipend to bring people who work from home to the city to build its tax base. Despite all that, Rondeau said he still hears on a near-weekly basis that he shouldn’t charge people to run games for them.

“You always hear things like people should play music for exposure, you should give out free art and do it for the art’s sake, and somehow making money off a job makes it less art,” he said. “People get very defensive when money is involved. My games are not for those people, and that’s OK.”

The Dungeons & Dragons Essentials Kit is “the single best introduction” to the fantasy role-playing game we’ve ever seen. The box includes everything you need to start playing D&D, including an introductory rulebook, a DM screen, a set of 11 dice, a handy set of cards for things players need to keep track of (initiative, magic items, etc.), and a brand-new adventure, Dragon of Icespire Peak.