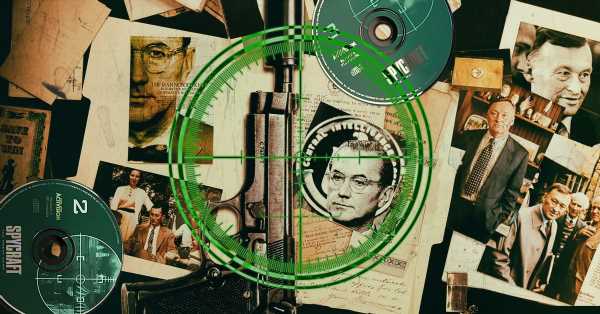 In the 1990s, shortly after the Cold War, a former KGB Major General and an ex-director of the CIA collaborated on one of the most ambitious video games of the era.

Spycraft is a cult hit full-motion video game, directed by Ken Berris and published by Activision under the guidance of the then fresh-faced CEO Bobby Kotick. It arrived on store shelves in 1996, just years after the end of the Cold War, and tells a spy story that has the player globe-hopping (and disc-swapping) from the United States, to Russia, Tunisia, and across the globe.

“Without being too hyperbolic, it was the best FMV game of its era,” says FMV aficionado (and successful podcast star) Justin McElroy. Spycraft combines pulpy full-motion cutscenes with puzzle-based gameplay that is clever and complicated and still holds up today.

So why has it been forgotten? And how did a video game — decades before the medium would be taken seriously as commercial art — bring together ex-CIA director William Colby, and former KGB Major General Oleg Kalugin?

For the past two years, Polygon Senior Video Editor Clayton Ashley and I have been making our documentary, The Great Game: The Making of Spycraft. We interviewed Berris — the director who “gave orders” to ex-spies. We spoke to Carl Colby, a film director who spent part of his career trying to make sense of his famous father’s actions. And we picked the brains of industry experts like McElroy and Christina Warren about the cultural moment this game launched into — an era too early to receive it.

But today, Spycraft resonates. During our two years with this project, the world has changed, forcing this increasingly complicated story into the present.

And second: In February of 2022, Russia invaded Ukraine. Vladimir Putin had been a colleague and a subordinate of Oleg Kalugin before the latter left Russia. The two men famously dislike each other. Though Kalugin has largely retreated from the public eye, he has spoken out against Putin before — and as a result, was prosecuted as a traitor.

Spycraft isn’t the story of Russia versus “the West.” It’s an amoral, but also strangely optimistic game. “It captures a particular moment, between the end of the Cold War and 9/11,” said the curator of Washington D.C.’s Spy Museum, Dr. Andrew Hammond. “These two superpowers that have faced off against each other, how are they going to relate to each other? What’s the dynamic going to be? And there was optimism, there was hope that they could be partners, they could work together more.”

It was a very different world from the one we find ourselves in now. The Great Game: The Making of Spycraft is a 50-minute long documentary film that will tell the story of Spycraft, its role in gaming history, and in the lives of the two titans of espionage who appeared it unforgettable — for the precious few who played it.

As Dr. Hammond, told us: “Quite often reality is actually much more wacky, and interesting than fiction.”

The Great Game: The Making of Spycraft will premiere in 2023. Follow our YouTube page for more updates. Spycraft itself is available on Steam, and still worth a play.