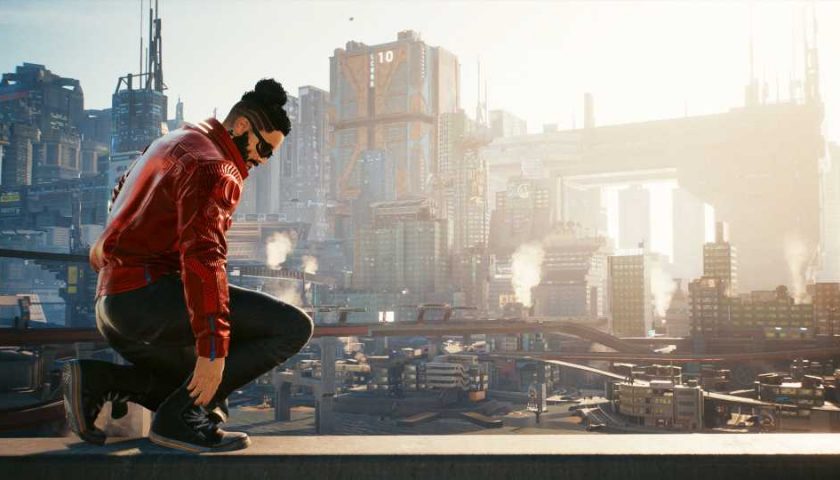 I've spent hours driving around Night City and frantically dashing between mission objectives, but I've never just slowed down and walked. So to get a sense of this dystopian metropolis as a place, I decided to ditch my Quadra and tour its districts on foot, at a regular pace, soaking up the atmosphere and taking a closer look at my surroundings. I've never been fully convinced by Night City as a setting, but I wondered if engaging with it this way, as a regular NC citizen would, I might find a new appreciation for it.

I start my journey in Pacifica, a vacation resort left to rot after a global financial crisis forced its investors to abandon it. Ruled by gangs and plagued by poverty, this is one of the least populated areas of Night City. As I stroll along a wide boulevard called Sunset, I hear sirens wail and gunfire echo in the distance. There's no traffic on the roads and very few pedestrians on the sidewalks. Ruined hotels hang over me ominously. To be fair to Cyberpunk 2077, it sure knows how to set a mood. The bleak atmosphere is palpable.

Occasionally I hear a disembodied voice emanating from some unseen advertising billboard, talking about the upcoming opening of the Grand Imperial Mall—which never actually opened. This recording is from long ago, and it glitches and distorts, suggesting it's been on a loop for years. There are a lot of nice touches like this in Pacifica, but there's just no life to the place. Pedestrians pace back and forth silently, gangsters stand motionless on street corners. The vibe is definitely there, but it's pretty superficial. 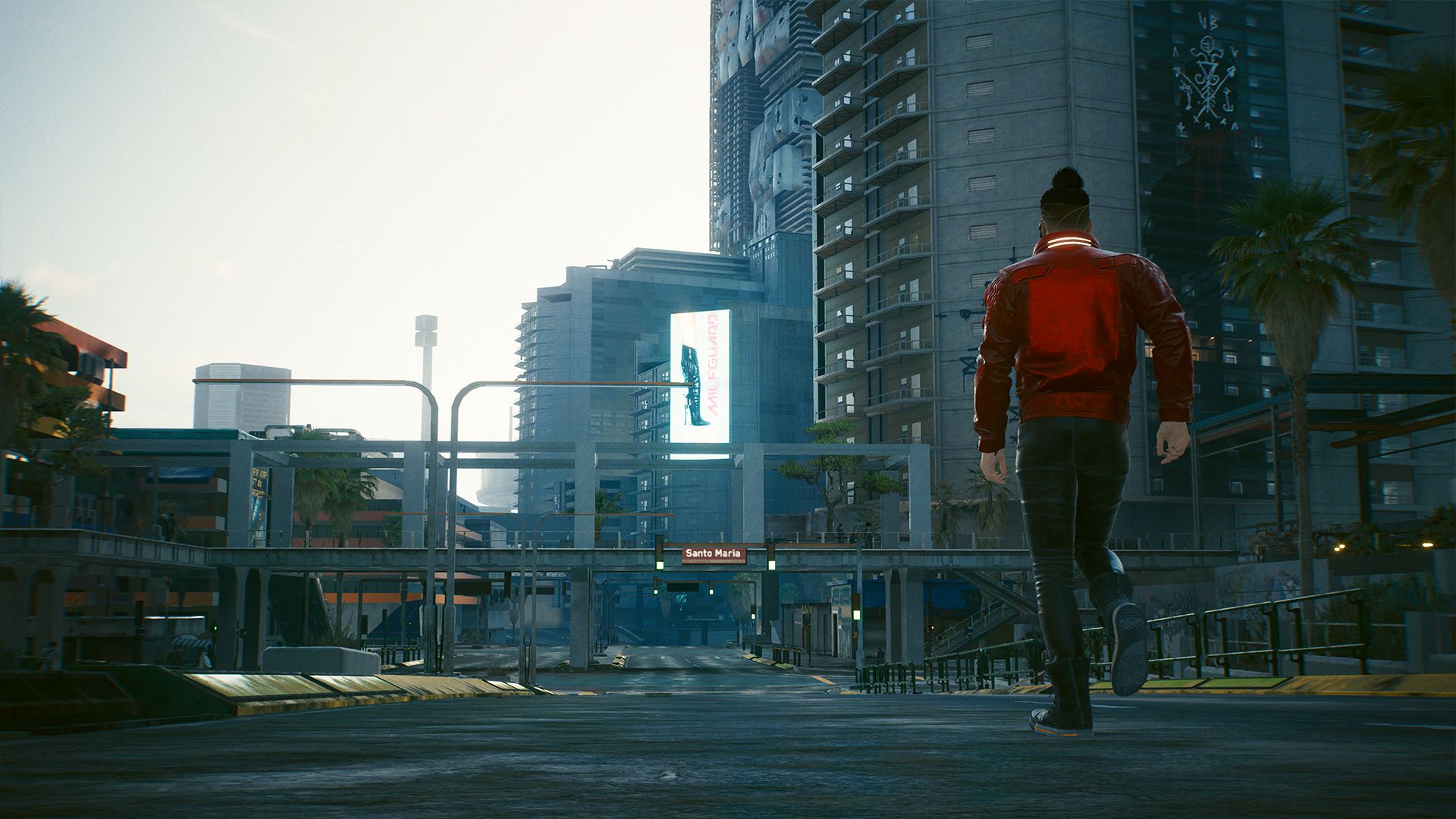 Something finally happens when I find a shantytown beneath an overpass. A wild-eyed street preacher stands before a crowd of onlookers, who hang on his every word. "The bomb of '23 was just the beginning," he exclaims. "Death will bury us all!" But before I learn what he's talking about, the crowd panics and scatters. A random NPC has walked into a nearby burning car and caught fire. He doesn't seem to mind, though. He continues walking, unbothered by the flames engulfing him, while the fleeing congregation screams.

This keeps happening. There are a few burning cars down here, and NPCs keep stupidly walking into them, causing more panic. Cyberpunk 2077's latest patch fixed a lot, and the game is in the best shape it's ever been in, but these illusion-shattering moments still occur frequently. But hey, at least it was something. It's just a shame the most interesting thing I encountered in the entire district was caused by the game bugging out. I leave Pacifica and its strange flaming citizens behind and head for the next district. 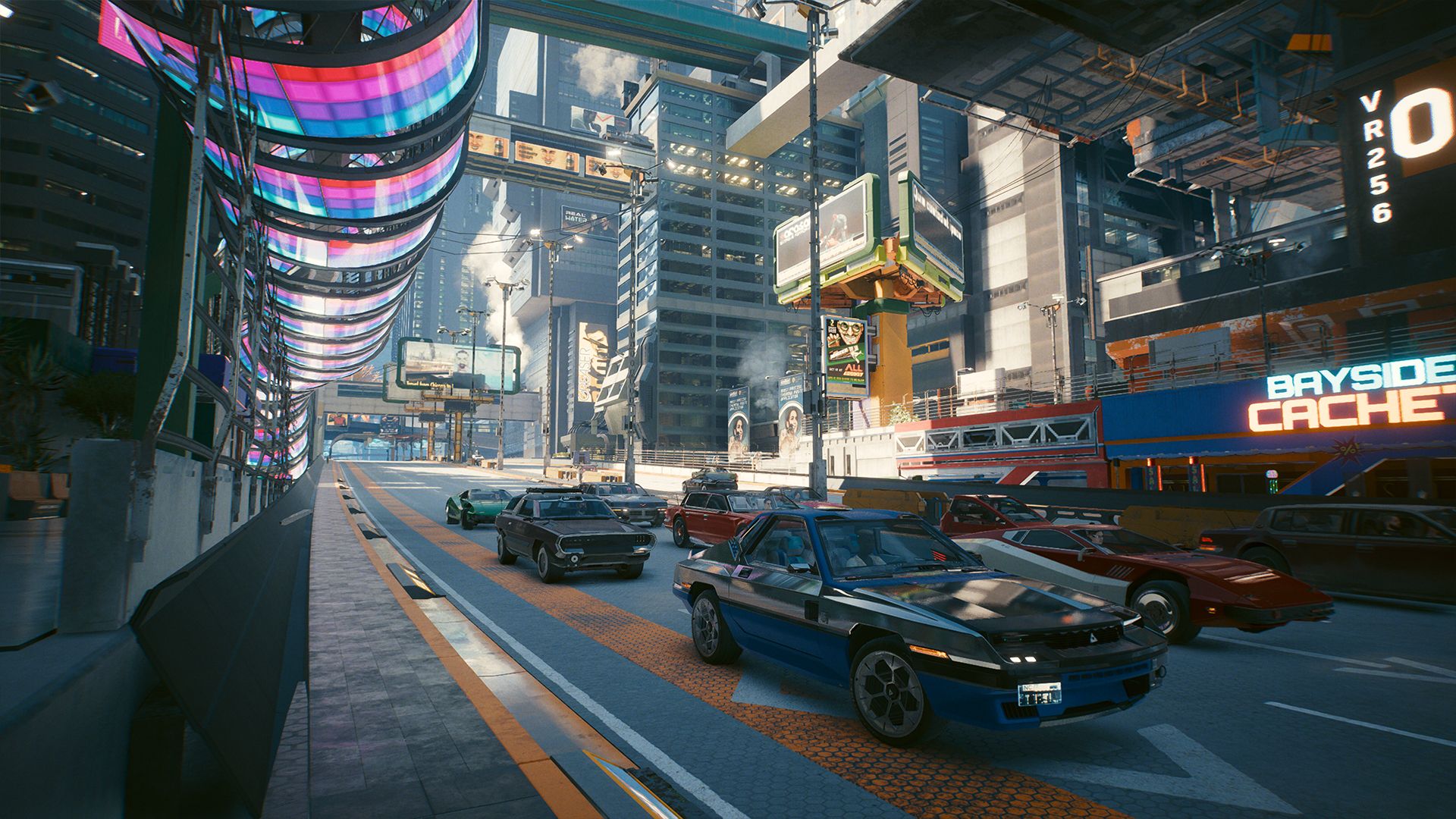 Heywood is a vibrant residential district with a predominantly Latino population, and it's a far cry from Pacifica. Suddenly, Night City explodes with activity. I see flying cars buzzing overhead, cars filling the roads, and a teeming mass of pedestrians. As I walk the streets I see a member of the Valentinos gang taking a photo of his buddy trying to look tough with a knife, people doing tai chi in a park, folk sitting at noodle bars slurping ramen from cardboard containers, and a guy playing licks on an electric guitar.

Near a housing estate, I encounter a group of sharp-suited corporate types standing on a street corner flanked by Arasaka guards. "Welcome to the infamous slums of Vista Del Rey!" a cheery tour guide says to the gathered crowd. "Can we take photos now?" one asks impatiently. "I paid for the premium package." This is a rare moment of ambient storytelling, nicely illustrating the gulf between the rich and the poor in Night City—and the corpos' indifference to the suffering of ordinary people. 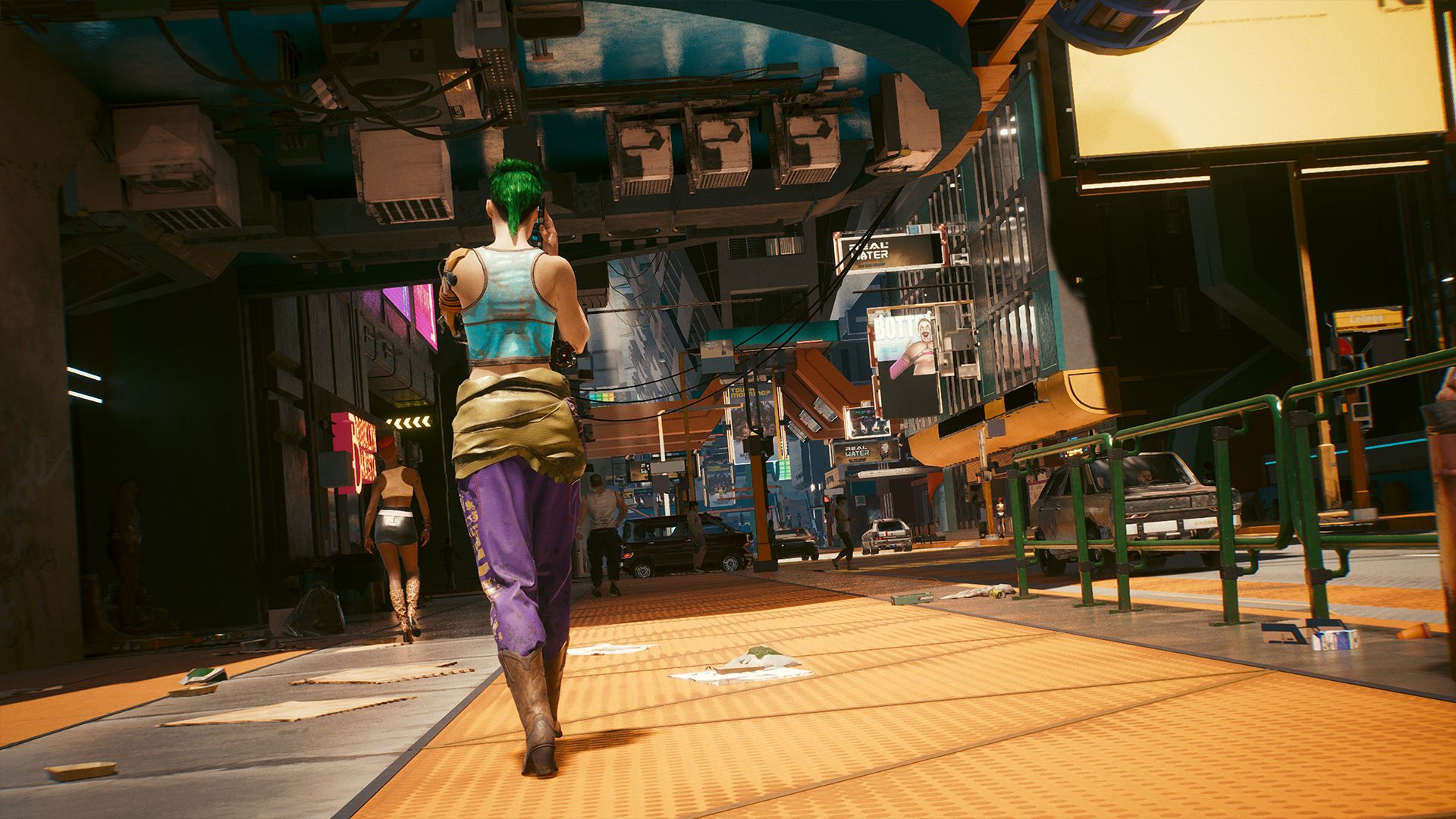 Night City should be full of moments like this, but they're few and far between. I walked all over Heywood, and it really hammered home how little actually happens on the streets of Night City. Knife-wielding posers and tai chi enthusiasts aside, it's mostly just pedestrians wandering aimlessly, police officers standing around looking bored, or whichever gang is most prevalent in the district harassing citizens as an excuse for you to go and get into a fight with them. The more I walk, the more artificial the city feels.

Next stop, Westbrook. I notice that as I travel between districts, the areas connecting them are curiously empty. I walk along freeways and wide roads that should be loaded with traffic, and see only one or two cars at a time—or sometimes none at all. Over 5 million people are supposed to live here, but it rarely feels like it on the roads. I'm playing on PS5, so perhaps the traffic density has been severely reduced for performance reasons—but it's still laughable compared to the car-stuffed roads in Grand Theft Auto 4. 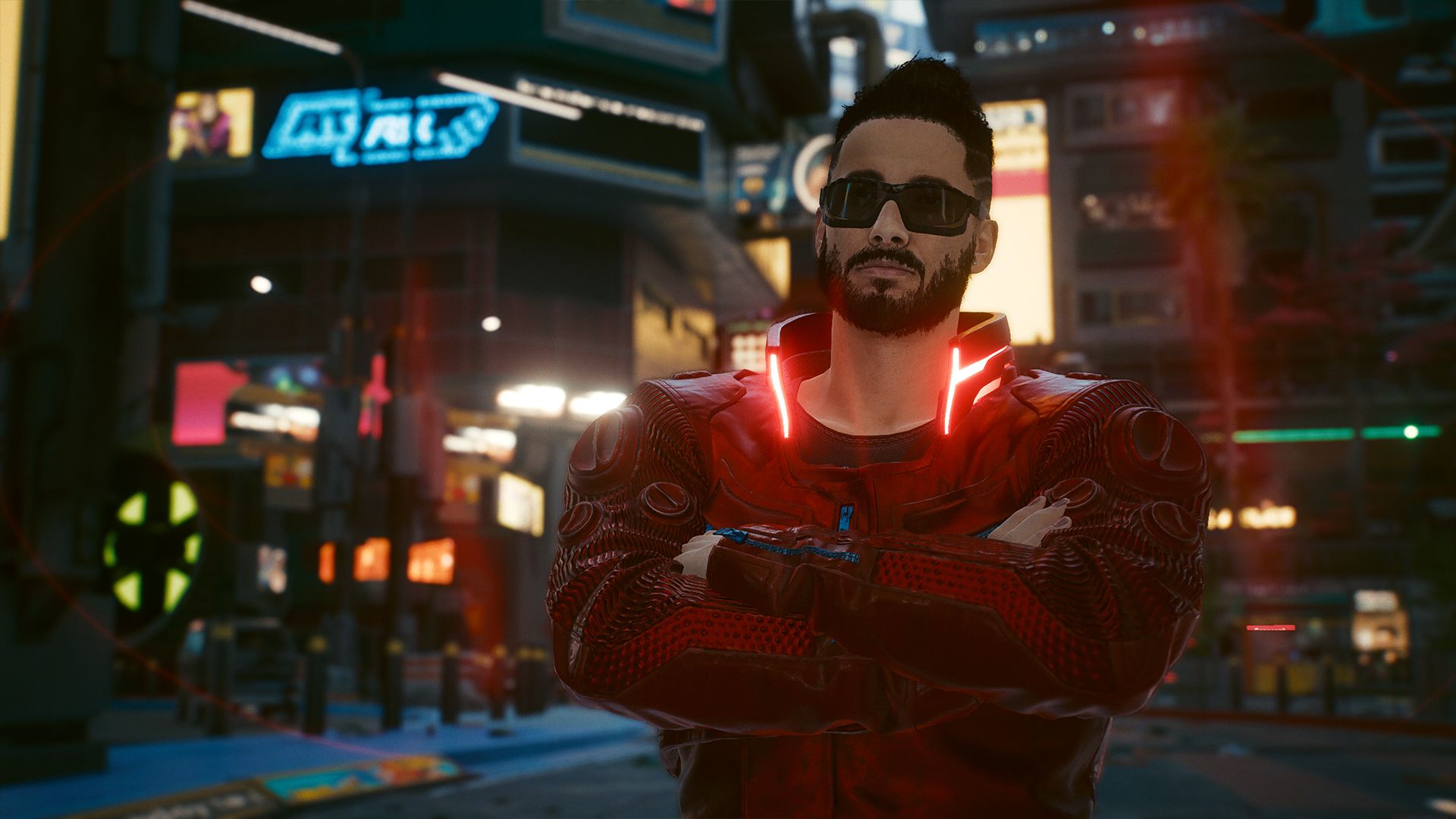 Westbrook is a popular district with the wealthy, celebrities, and other influential people. It's an adult playground of bars, sex clubs, and just about every kind of indulgence you can imagine. It also has a sizable Japanese population, which is reflected in its architecture, advertising, and the abundance of cherry trees—some real, some holographic—lining the streets. Arriving here, I'm impressed by how much busier the city feels, even compared to Heywood. Even the ambient sound of the streets is louder.

This is the prettiest district in Cyberpunk 2077. It's dense, detailed, and colourful, and I love how the streets snake through buildings and span multiple levels. It's chaos, as if multiple districts have been stacked on top of each other. But by this point, after an hour of walking, I'm really starting to get bored of how the game repeatedly fails to back up the intricacy, craft, and atmosphere of its setting with any meaningful details. Westbrook looks amazing, no doubt, but it's dead. Nothing happens the whole time I'm here. 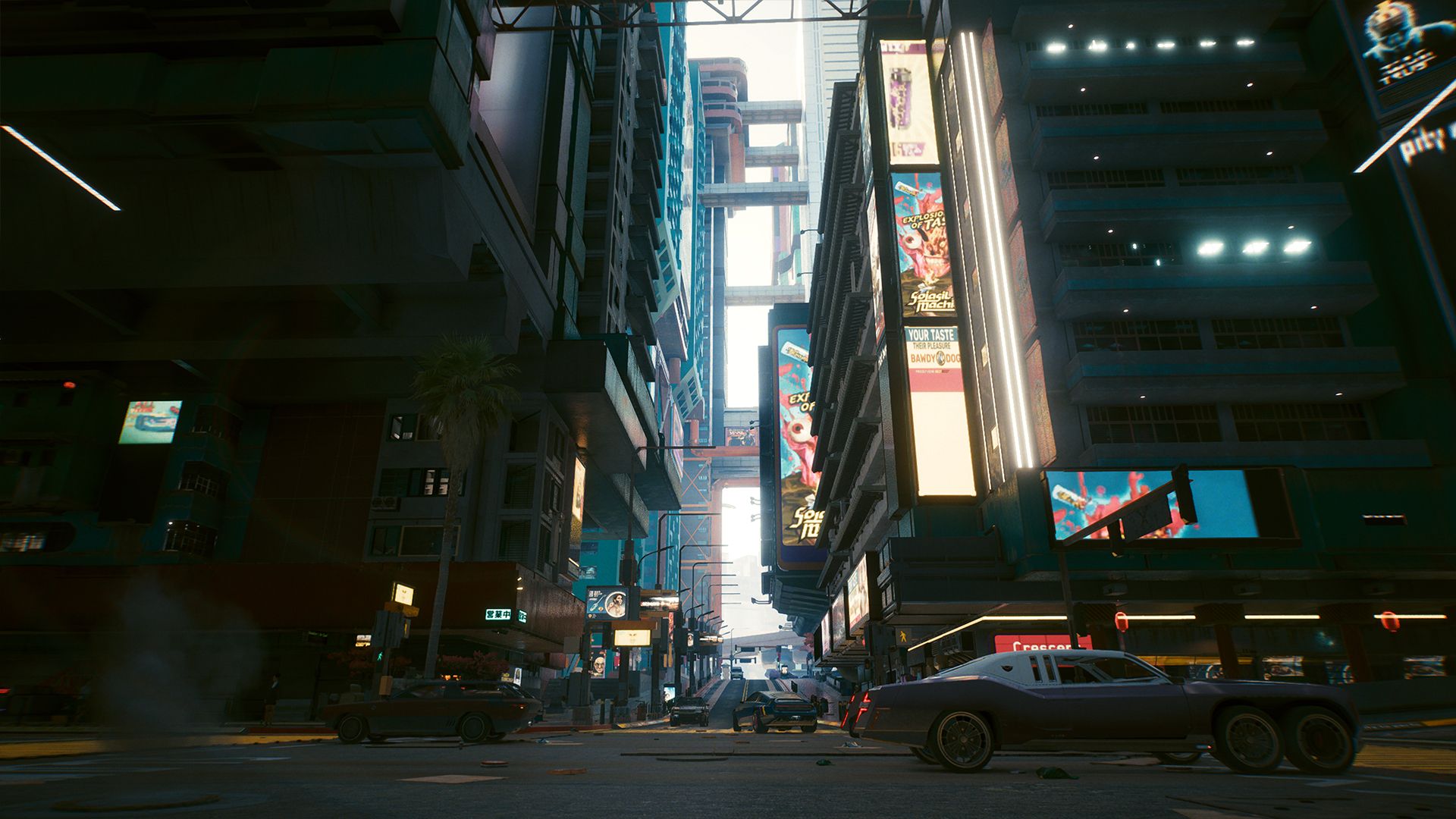 I'm excited to see a crowd of angry people waving signs in the distance. I run over and find myself in the midst of a protest, watched over by a line of armoured cops. But a woman standing on a box addressing the crowd, the leader, isn't saying anything. She's punching the air and pointing and making all the motions of someone giving an impassioned speech, but remaining bafflingly silent. The protestors' signs say THE END IS NIGH, which doesn't tell me much. I have no idea what's going on here, or why.

I push through the crowd, leap over a barrier, and casually stroll past the cops. They don't react at all, and I find myself in a movie studio backlot that the game's artists seem to have forgotten to decorate. There's less than nothing to see or do here, except for listening in on a couple of film industry types having an uninteresting chat about some actor they don't like. They're the only NPCs in the whole area. This is yet another example of Cyberpunk 2077's world being eerily devoid of life and completely unrewarding to explore. 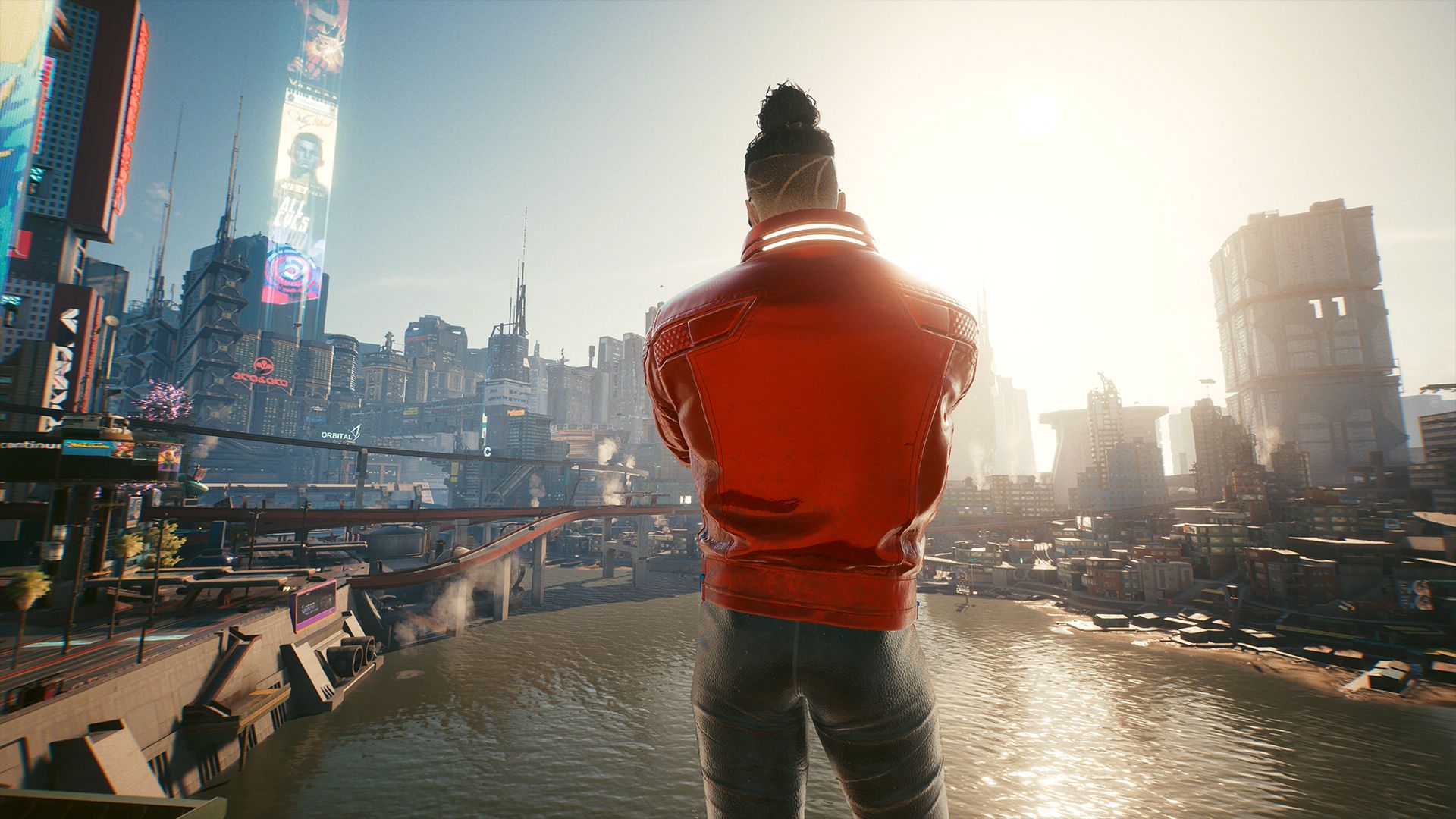 Watson next: a densely packed district with bustling markets hidden down narrow alleyways, and home to the game's protagonist, V. Night has fallen, which is when, appropriately, Night City always looks its best. I've entered through an industrial district, and I'm wandering along long, empty roads flanked by pollution-spewing factories. The night sky turns a burnt orange colour, and it's very pretty and atmospheric to look at—but, again, a complete washout when it comes to giving me things to see or do.

Things get more interesting when I reach the more populated areas of Watson. A sandstorm rolls in and gives the city a dramatic new look. I can see faint lights in the distance, struggling through the haze of sand, and the silhouettes of palm trees being rocked aggressively by the howling wind. When it clears I'm in the area outside of V's apartment, which is loaded with nice little hand-crafted details—presumably because this is the area the developer kept showing in demos, and it's had the most work done to it as a result. 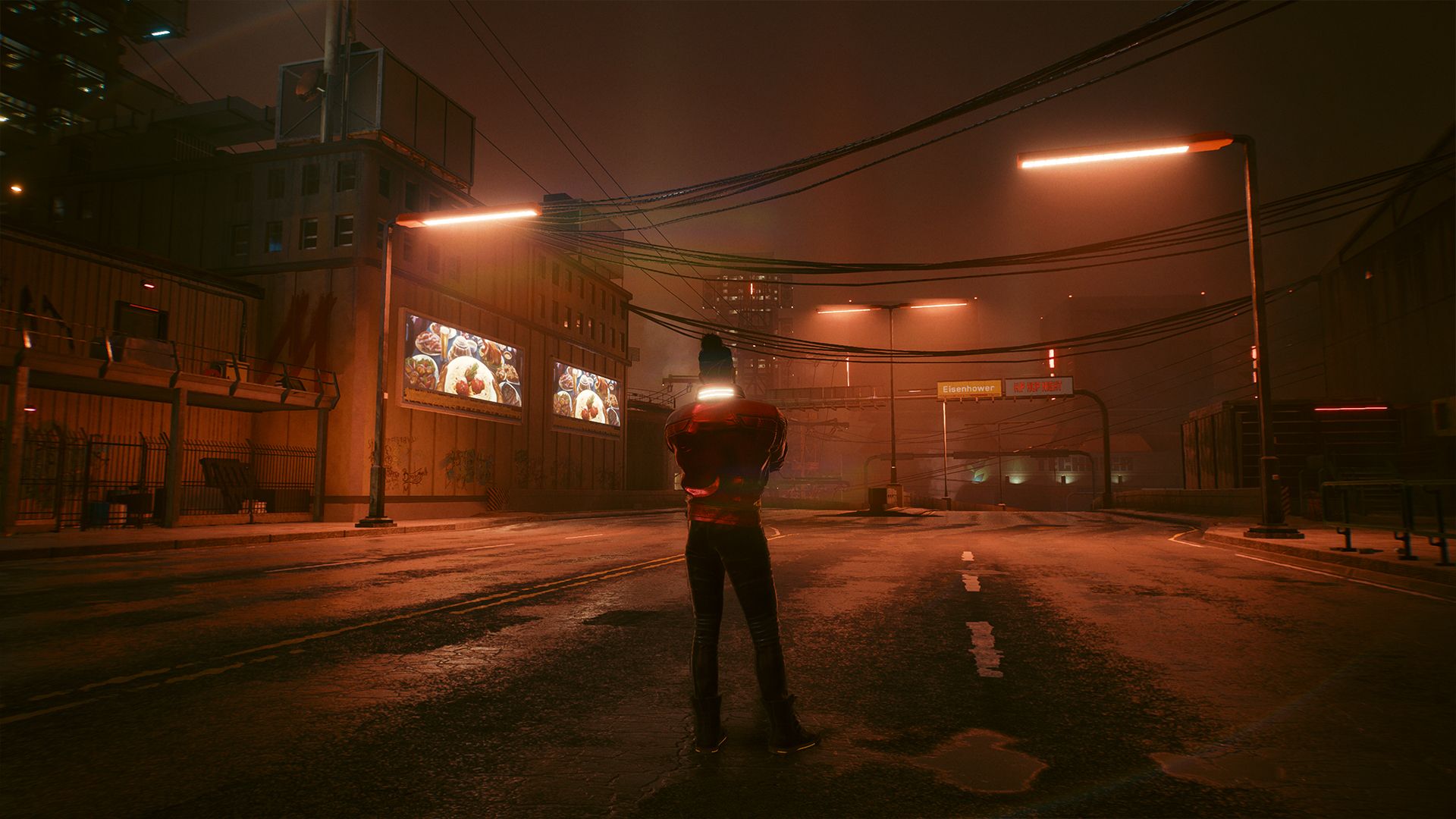 Watson's famous markets are so dense with people and clutter that they tank the frame rate, even in the new PS5 version's performance mode. It's certainly exciting to look at—but only at a glance. I've fully stopped believing in Night City as a place now. It's a shallow theme park populated by mindless automatons cycling through canned animations, and I feel like if I leaned on a wall the cardboard facade of the building would come crashing down. This world gets so much right, but it holds up to no scrutiny.

I've been walking around Night City for ages now, and that guy accidentally setting himself on fire a few hours ago is still the most surprising thing that's occurred—and that wasn't even meant to happen. I leave Watson behind and head for the City Centre, which is where the dizzying scale of Night City is most apparent. The skyscrapers are massive and I feel momentarily overwhelmed by the sheer size of the place. But I'm more stunned to discover that there's even less going on here, the supposed heart of the city, than Pacifica. 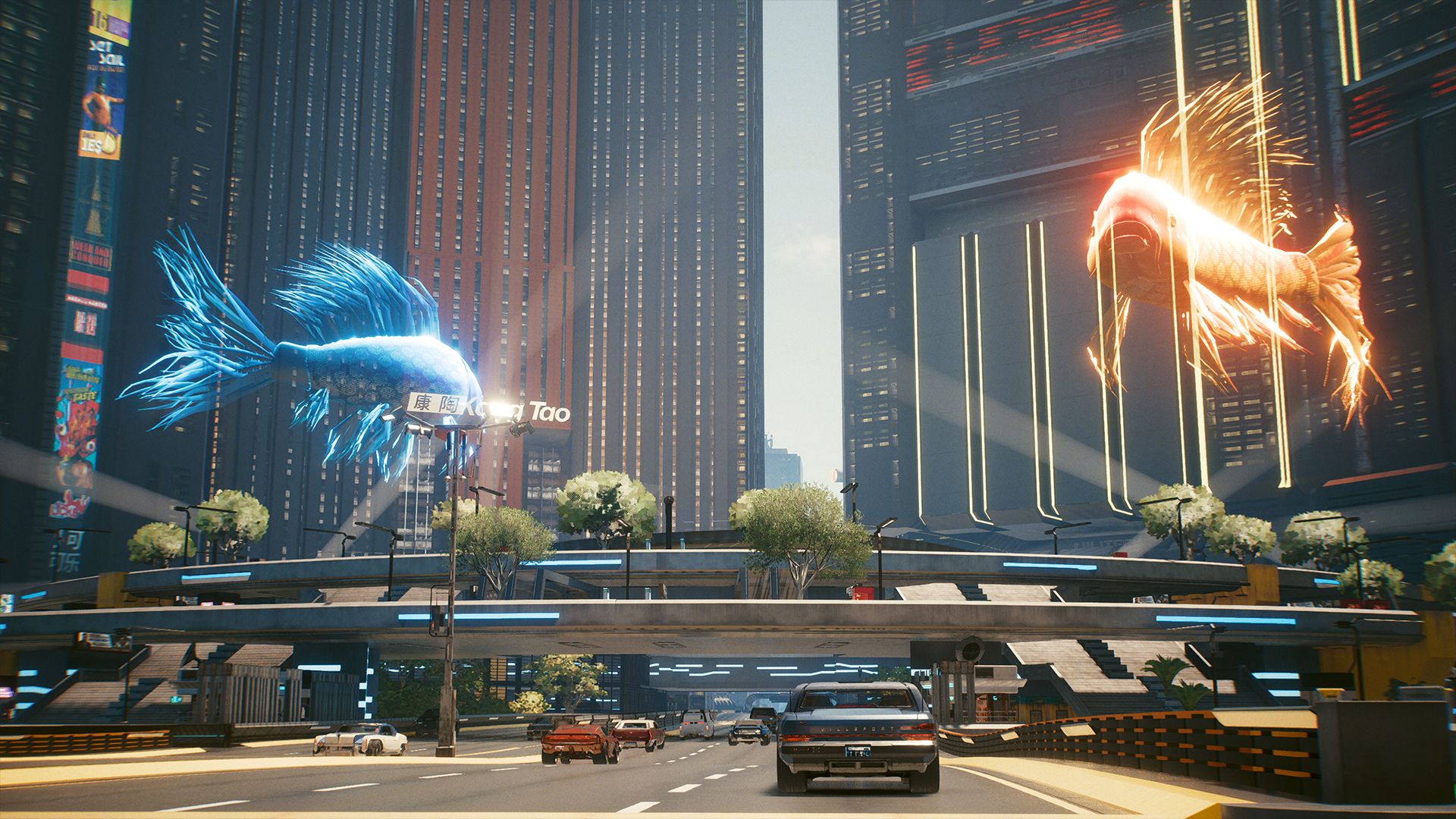 Yeah, that's right: one paragraph for downtown. That's how underwhelming it was. Maybe I was just unlucky, but I didn't encounter any interesting world-building, scripted events, or even a single intriguing conversation between people on the street. My next and final stop is Santo Domingo, a mix of industry and suburbs, and a nice change of scenery from the more built-up areas of Night City. This might be my favourite district in the city, just because it's so wildly different from everything else surrounding it.

After getting briefly lost in a labyrinth of freeways, I find myself in Santo Domingo's residential area. I love the contrast of the rows of normal-ass suburban houses here, and the neon-lit city skyline in the distance looming over them. The cracked sidewalks are illuminated by rows of blue-tinged street lights, occasionally broken up by the garish, colourful glow of convenience stores and sex shops. I see an old strip mall taken over by gangsters and battered, rusty old cars wheezing along the roads. 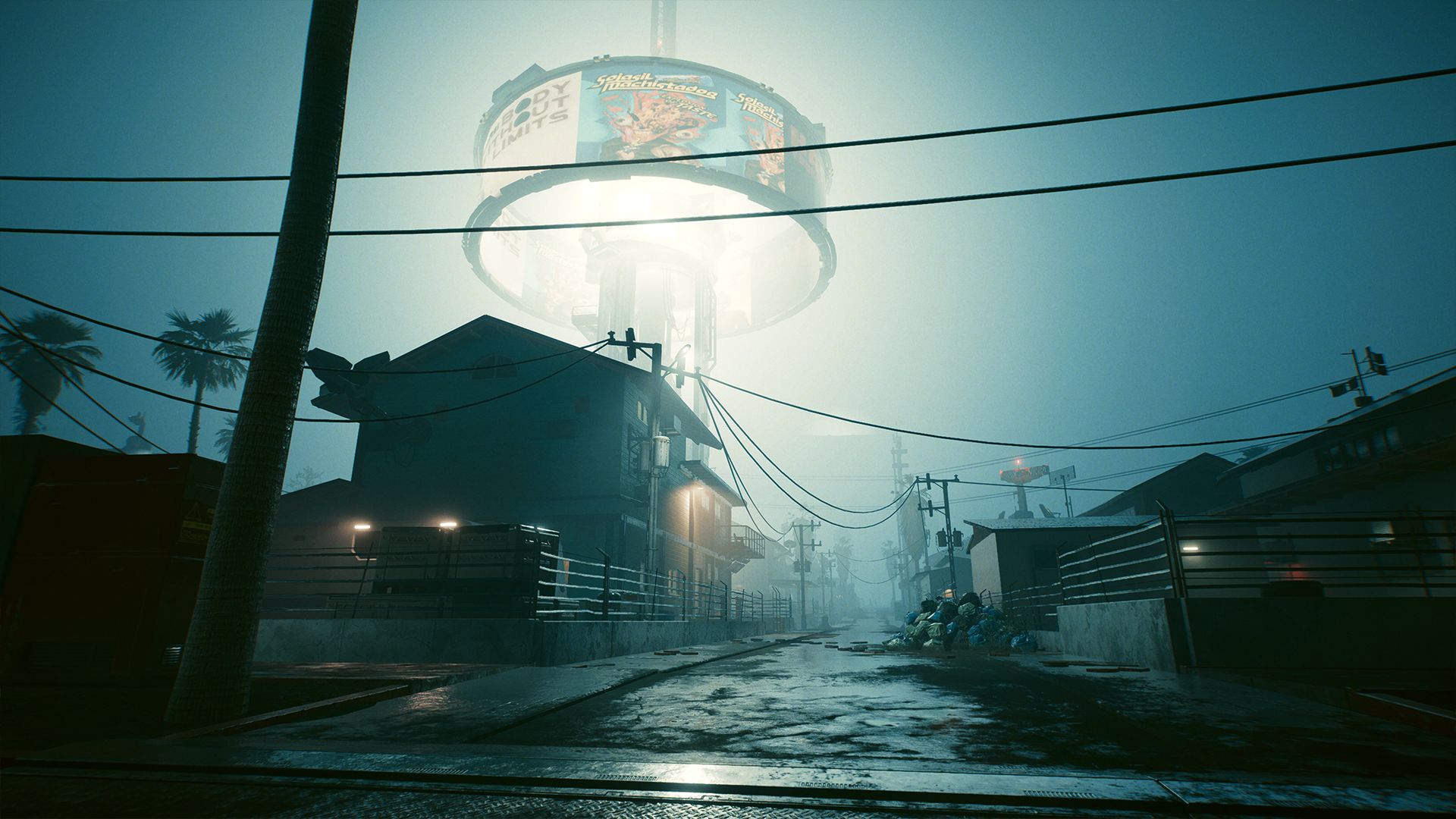 But I'm done with Night City. It just doesn't work for me. It looks and sounds sensational, but there's nothing of substance here. As a setting it rings hollow, and what it gets right is barely skin deep. It's frustrating, because I've been waiting for a virtual city like this for years. I'm still enjoying Cyberpunk 2077, having readjusted my expectations to treat it like the linear action game it really, secretly is. But when it comes to rewarding exploration and discovery, and being drawn into a world, it falls spectacularly flat.