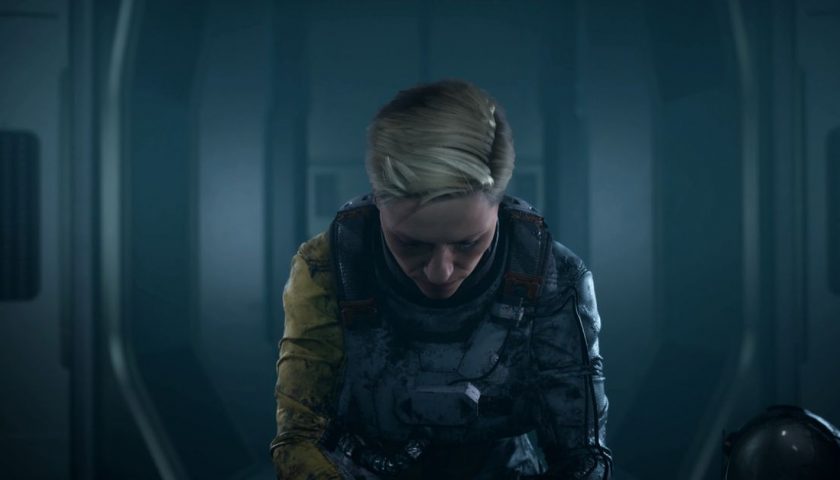 The world came crashing to a halt in 2020. Many of us have been trapped in the same house, apartment or office in a seemingly looping, endless grind. Those of us still here in 2021, having aged about a decade, endure constant instability — the only constant being that the life we knew doesn’t exist anymore. But at least this nightmare is a shared one: We are joined by ghoulish chains and a choir of screams, but at least we are not alone as the world is engulfed by plagues, apocalyptic weather, incompetent governments, and powerful men. Manifesting our fears is one way we can collectively deal with them — that’s why horror games have been ideal for 2021.

Perhaps the most “2021” horror game is Returnal. This time-loop roguelike is set on a mysterious, hostile alien planet. Protagonist Selene must find a way to escape, while also investigating the weird world, and battling the beautifully horrific fauna and flora. Each time she dies, she’s returned to her downed ship, losing all progress, to try to get further next time. The world will change ever so slightly, but she must start from the beginning each time.

In 2021, the idea of our situation never changing — despite all our efforts — hits close to home. But Selene’s unrelenting drive to continue is inspiring. Unwavering in the teeth of monstrous beings, unstoppable in the face of a world determined to end her, Selene persists in her attempt to overcome the horrors around her. Although Returnal was years in the making, developer Housemarque tapped into precisely the kind of hero we need today: stuck in a grind, and picking herself up when she fails.

Returnal is not the only time-loop game of 2021, of course: Deathloop, The Forgotten City, and Outer Wilds: Echoes of the Eye all played with the same conceit. But the combination of horror and looping is a poignant combination, especially during a year when we all feel trapped.

Many of us had to return to our homes to weather the pains of these past two years. Mundaun, another 2021 release, is about what happens when you go home unexpectedly. Protagonist Curdin gets a letter indicating that his grandfather, who raised him, has died. But the situation around the grandfather’s death is not what it appears — Curdin stumbles into a cosmically horrific nightmare scenario that shakes the world to its core.

Mundaun is a first-person survival-horror game that uses a hand-penciled style the developers scanned from sketch books. It is deeply unsettling to be in this mostly monochrome world, as if I’d fallen into the brown sketch pad of a cult leader. Nothing is what I’d call beautifully drawn, but it is completely unique. Mundaun’s drab, ugly, and unsettling visual experience articulates what a lot of us who unwillingly returned home feel: The world that we once knew has become slightly … off. Instead of finding the safety we sought or hoped for, things have changed, and there are now new entities, emerging from the environment we thought we knew, determined to kill us.

Mundaun is the dreadful vacation I didn’t know I needed

That constant threat of lethality in a world we once knew is also articulated in Alan Wake: Remastered. While the original game came out in 2010, this 2021 release puts new luster on a third-person action-horror title that drinks ebulliently from the well of Twin Peaks. Alan Wake gleefully sets about doing all it can to make its titular protagonist endure the worst holiday he’s ever had. The world around him is trying to kill him, and 2020-2021 is the first time many of us experienced that existential insecurity where even stepping outside, into familiar yet unfamiliar places, could mean we end up hurt or dead. While we’re not running away from possessed townspeople or creepy creatures in the forest, we are now living with a constant heightened sense of anxiety. And, unlike Alan, we don’t have seemingly endless coffee thermoses to help us along. (See also Resident Evil: Village, though I think its predecessor Biohazard was a more Covid-focused game, given that you’re trapped in a house with a family whose life has been turned upside down by an infection.)

The Medium was touted as a big next-gen exclusive, and it only came to PlayStation 5 recently. Like many other 2021 horror games, it’s about being trapped in one location. But it utilizes an interesting dual-world mechanic that, to me, spoke a lot to our collective state of mind in 2021. That idea of a split self — of having to operate as if you’re in the normal world while simultaneously in a nightmare one — felt reminiscent of our everyday routine, where on the one hand, the world has seemingly ended but, on the other, we still have to pay rent.

Inscryption — Polygon’s Game of the Year — wonderfully captures 2021’s feeling of dreaded bewilderment. What begins as a roguelike deck builder where you play against a mysterious shadowed figure in a creepy hut soon turns into … not that. It’s a game that captures the notion of a nightmare very well; nightmares are not just another term for “scary,” but also, unrelenting dread and existential confusion from which you cannot escape. When we talk about 2020 and 2021, fewer terms properly capture it than “nightmare.” We are very much trapped in a dark place, at the mercy of forces and concepts we cannot control.

Again, what all this speaks to is how horror taps into that ongoing sense of dread, frustration, and existential ennui. Games have always been an ideal medium for horror, since they, by nature, require interaction. But regardless of the medium, horror paints a picture of the worst fears that we bottle up. They are made worse because we contain and experience them alone. Horror not only allows us an opportunity to see our fear externalized, it also gives us a canvas we can point to for others to see. Nightmares would do less damage if we could share them with others. 2020 and 2021 have been a time of hardship, but through collective suffering and support, they have become less so. It’s telling that these horror games were never made with the idea of being released during a pandemic, yet here they are, speaking to the dread we feel. It shows the universality of horror and its importance as a genre.

Horror detractors often wonder who would willingly choose to “put themselves through that” in terms of playing horror games. Well, unlike the nightmare of a pandemic, I can turn off the game. I know there’s a win state, and I can always find ways to beat it. Horror games remind us that people aren’t passive when bad things happen. They get up, reload, and march on, even in the teeth of futility and Sisyphean tasks. They face the horrors around them; they grieve and struggle, but they fight.