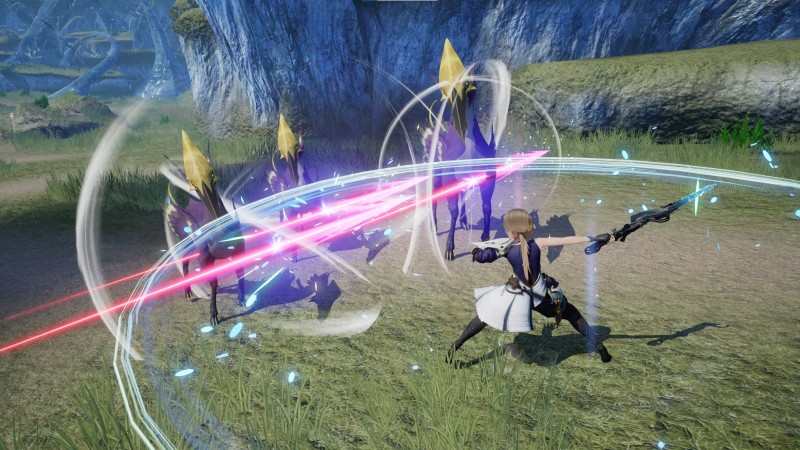 Harvestella wants to be a jack of two trades, but winds up a master of none. Part action-RPG, part farming/life simulation, this combination can sometimes be enjoyable, but the two styles clash more often than not. The result is a sluggish grind more likely to repel fans of each genre than bring them together.

As an amnesiac warrior, you awaken on the outskirts of a quaint village, unaware of your origin and purpose. Four powerful, monolithic crystals called Seaslight govern the environmental stability of the picturesque continent, namely its seasons. However, a deadly fifth season called Quietus occurs between each of the four normal seasons, wiping out crops and endangering humans. This strange normalcy becomes unstable when the Seaslight begin behaving irregularly, seemingly triggered by the mysterious arrival of Aria, a young scientist from the distant future. Like you, Aria is clueless about how she got here, so you partner up to discover your respective origins while also combating a global crisis. Oh, and building a nice farm too.

To its credit, the plot is engaging in its absurdity. In typical JRPG fashion, the mystery gradually becomes more grandiose and unhinged as it unfolds. While much of it is silly, I found little of it boring. One revelation made me laugh out loud at how bizarre it is, and I can’t help but respect Harvestella’s willingness to take some wild turns while sprinkling a few poignant moments. A large band of likable party members, such as a smooth-talking inventor, an A.I.-powered robot, and a talking unicorn, joins the primary duo, but you largely spend time with them one-on-one. As such, you don’t often see everyone hang out together, and when they do, the lack of group chemistry is noticeable and disappointing. It’s like inviting a bunch of good friends to hang out who know you, but not each other.

Harvestella promotes two styles of play but feels like an action-RPG first and a farming game second. Gameplay involves running through bland dungeons and hacking apart foes, collecting crafting materials and ingredients along the way. A robust job system offers a good variety of playstyles, but I only gravitated toward a few of them. My favorites include the nimble, combo-centric Shadow Walker and the dancing floating blades of the Pilgrim class. Other jobs, like the Mechanic and singing-focused Woglinde, simply aren’t fun to use, and the game rarely encouraged me to experiment once I settled on my favorites. Even with classes and attacks I enjoyed, the combat is middling, and bosses are either pushovers or infuriatingly cheap.

Farming fans won’t find much unique about Harvestella. You plant crops on tilled land that can be expanded in size several times, process food using machines, but you only rear two animal species. The farm changes with the seasons, which shift every 30 days, and certain food can only grow during specific times of the year. Quietus, which only lasts a day, eradicates crops, but I found it easy to plan around, making it less threatening than likely intended.

Like combat, farming only feels passable, but is crucial to success. Selling crops serves as one of the few ways to earn money. You also need a full pantry to whip up a variety of dishes. Eating keeps your belly full, which in turn fuels your stamina bar. This meter governs actions such as farming, sprinting, and even executing special attacks. Eating also replenishes health, often in large amounts depending on the dish. However, you can’t eat if you’re full, which becomes a maddening hindrance during tough battles. Since traditional health potions don’t exist, you’ll be making all of your recovery items. Doing so takes time which feeds into Harvestella’s biggest nuisance: the clock.

Harvestella operates on an in-game day/night cycle that advances in 10-minute increments faster than you expect. Night begins at 6 p.m., and your character becomes sleepy at 10, slowing their stamina recovery. Thus, returning home to crash in your bed – and only your bed as, annoyingly, you can’t sleep at the game’s several inns – is vital. Staying out past midnight causes your hero to collapse from exhaustion, warping them back home. Falling to exhaustion or death comes at the oppressively steep price of paying an increasingly exorbitant doctor’s fee while clicking through the same unskippable cutscene. It’s a loathsome penalty that’s too strict for its own good.

Since you have to drop everything to return home each night, progress becomes a massively slow grind. Dungeon crawling consists of inching forward before you have to stop and resume the next day. Simply reaching a location on the world map burns precious minutes until faster means of travel open up. Even after finding shortcuts and fast-travel checkpoints, you still rerun sections of a dungeon repeatedly until you reach uncharted territory. Doing so inevitably drains your food supply, so you have to set aside time to cook beforehand. Making dishes eats a substantial chunk of the day, limiting the time to adventure. Running out of cooking ingredients means growing more of them, as only a handful of staples can be purchased. That means spending at least a few days waiting for crops to replenish, then creating enough food to venture back into a dungeon, and repeating the cycle all over again.

This framework effectively makes it impossible to progress the story for very long. There’s often so much work that has to be done beforehand that I was often lucky to have enough daylight to pursue the missions I wanted. This frustrated me most when the plot hit an interesting turn, and I wanted to see what came next. It’s an awful form of gating, as progress is bottlenecked no matter how powerful or well-equipped I was. In some cases, it can take days of work and prep to complete a single dungeon floor.

When I didn’t have enough time in the day to complete a story mission, Harvestella admirably provides plenty to do outside of the main narrative and farming. A ton of multi-chapter sidequests await, though most of them involve reading lengthy conversations, completing a basic combat encounter, or running tedious errands. Despite a few interesting stories, these missions aren’t great, but the game makes completing them worthwhile, for better or worse. Side missions offer tons of cash, vital recipes, blueprints, and seeds. To my chagrin, completing as many as possible became a necessary evil. I preferred the party bonding missions, in which I learned about my teammates’ troubles by helping them through unique storylines. These quests were at least more interesting and rewarded me with enhanced physical perks, such as greater strength, defense, etc., practically making them required playing.

Though it runs well, Harvestella also suffers from graphical glitches that make it feel unstable at times. Specifically, a strange bug where half of the screen occasionally flickered a solid color, whether docked or in handheld mode. The game also doesn’t look great on the big screen due to its low-resolution textures and models.

Harvestella’s systems feed together in a way that forces you to engage with nearly everything it offers, whether you want to or not. But those slice-of-life activities are mundane and get in the way of letting you enjoy the RPG elements on your own terms. Maximizing a day’s schedule is sometimes rewarding, but the sluggish pacing makes it tough to stay engaged for the long haul. Harvestella forces you to do a whole lot to complete comparatively little. At 70-80 hours, it’s one of the biggest chores I’ve played in some time. That’s unfortunate because the combat, story, and characters are decent enough that, in a more traditional RPG framework, they’d shine brighter. As it stands, squeezing this fruit isn’t always worth its small amount of juice.