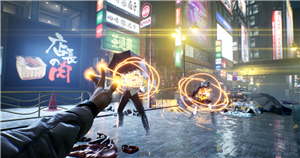 Ghostwire Tokyo was meant to be another must-buy killler exclusive for the PS5.

But the developers have fallen short on this one.

And instead what we get is a competent fighting game, with great visuals but one that doesn’t reach the lofty heights of fellow PS5 hits like Horizon: Forbidden West.

This Bethesda title is an action-adventure game from Tango Gameworks set in a beautifully-realised version of Japanese city Tokyo.

It’s authentic looking and eerie as you wander around an abandoned metropolis rich in tradition and history facing off against a supernatural threat.

A massive paranormal event causes the sudden disappearance of 99% of the population while spirits from Japanese folklore storm Tokyo, as you do. Players are tasked with harnessing paranormal abilities to solve the mystery of the disappearances and save the city.

You play Akito, a young man caught up in a horror road accident who isn’t ready to die.

He’s then in a constant tangle with strong-willed spirit KK who wants control of his body to take on and defeat the mysterious masked baddie controlling the city and seemingly filling it with the ghosts.

This sets up a neat buddy-cop style back and forth between your two protagonists in the same body.

They chat and guide one another through the game, utilising the PS5 controller’s in-built speaker to give KK an otherworldliness and overt closeness to the gamer.

The story is all a bit difficult and unnecessarily mysterious to really allow you to get into it, but basically the spirit wants to kill the baddie and Akito wants to save the girl.

Ghostwire nails the atmosphere of a supernatural horror movie thanks to its superb first-person detailed graphical view of the city and regular jump scares in the storytelling. The monsters look menacing and the firefights colourful as you trade vivid green/red/blue shots at each other as you learn to control things like fire and water as well as magical green bolts.

Tokyo looks amazing in this game and it is the uneasy detail in the clothing left behind on the ground thanks to the sudden loss of the population that adds to the dark brooding, empty streets vibe.

Ghostwire falls down on the gameplay itself.

Because once you strip away the beautiful visuals and clever use of the DualSense controller to give you the feel of attacks and even raindrops on your hands using haptic feedback, what you ultimately have is a fairly bog-standard shooting game.

One that doesn’t really improve over time and offers the same constant fighting mechanics that get old quickly.

Unlike a Call of Duty or Battlefield, the supernatural shooting in this game isn’t as satisfying and I tired of blasting baddies as I progressed deeper into the title. There’s plenty of open world to discover and cool little side missions but it all feels like many games before and actually, under the sheen offers very little in the way of new or unique gaming.

Ghostwire Tokyo is a good game.

It nails atmosphere and looks next-generation on the PS5.

There’s clever use of the new controller options.

But when it comes to video games, gameplay is ultimately everything and this title simply won’t blow you away.