Genshin Impact is the toast of the gaming world right now, and a large part of that charm is due to the endearing cast. From femboy icon Venti to magical mommy Lisa, the massive cast is full of myriad memorable characters that you can gamble for with actual human dollars.

But one of the most endearing characters is one that you don’t have to take out a second mortgage for – a cheeky little floating infant named Paimon. Cute as she is, however, the game’s cast constantly refers to her as “emergency food.” It may sound barbaric, but it’s important to keep in mind that she could likely be roasted on a spit should the right circumstances arise.

With that in mind, here are some handy tips on how best to cook your own Paimon when the time comes! 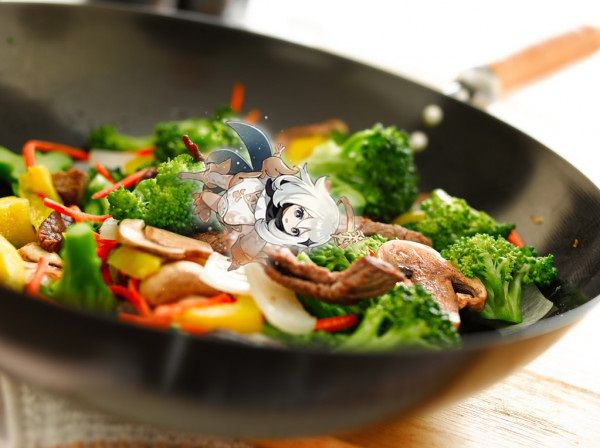 There’s a lot of Paimon to go around. She may be small compared to a normal human, but in terms of food, she’s far bigger than most game animals. There’s a lot of meat on those tiny bones of hers, and if you’re in a hurry, you probably want an easy way to deal with all of it.

Lo and behold, we’ve got the perfect solution: a savory stir-fry! This tasty meal is a great way to make a lot of food in a jiffy, and relatively low-effort compared to the other options on this list.

Simply take one (1) Paimon and lay her flat on a cutting board, then divide the meat into medium-sized strips. It’s important to take the skin off first, though, as it’ll crisp up and burn very quickly compared to everything else in the pan. Then, you’ll want to take your pile of Paimon strips and toss them into a pan with some garlic, sesame oil, and vegetables of your choice.

Voila – you’ve got a huge batch of delicious, nutritious stir-fry, with plenty of sauces and other flavors to drown out Paimon’s natural gamey-ness! 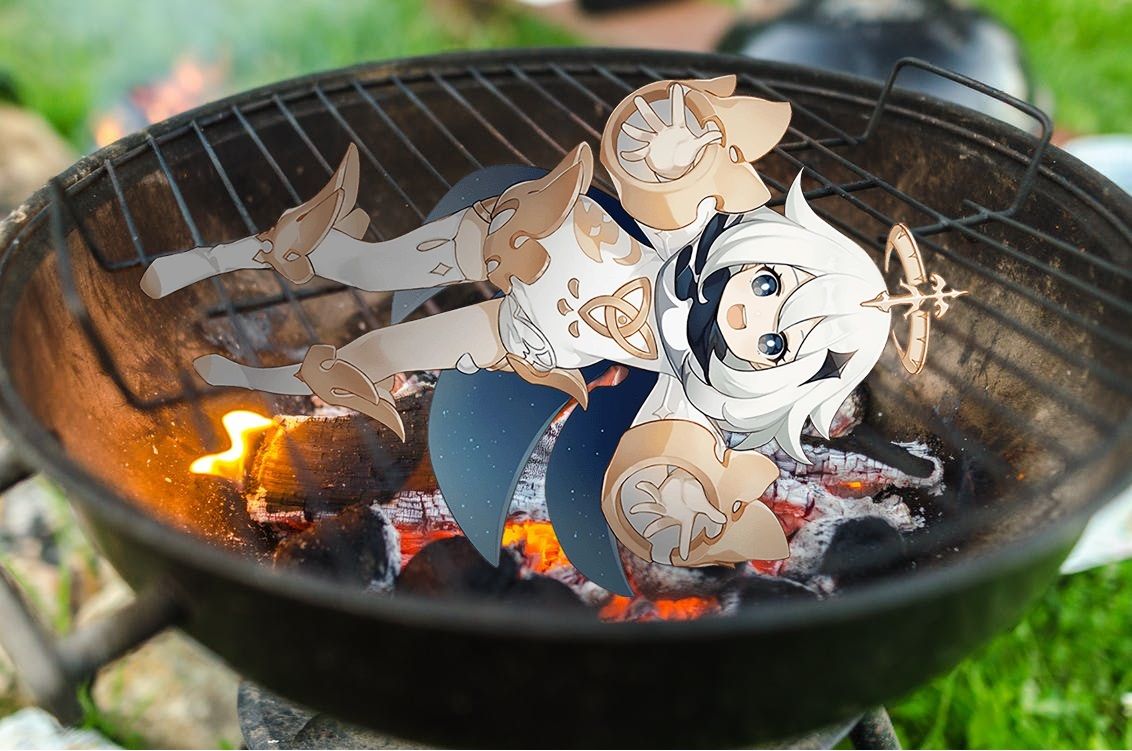 If you’re settling down for a bigger meal, and really want to treat yourself, grilling up a juicy Paimon steak is never a bad choice!

First, it’s important to pick out the best parts of Paimon to grill. If you’re in the mood for something fatty, breast meat is probably your best bet – although it’s worth noting that Paimon doesn’t have much in the way of it. For something with a bit more protein, we recommend cutting off your Paimon’s legs, with a bit of bone sticking out of the end for easy handling!

In either case, simply skin your Paimon and cut off your portion of meat. Then, roll her meat in a seasoning blend – we recommend a zesty mix of garlic salt, cumin, paprika, peppercorn, and chipotle powder! Once you have your portion of Paimon ready, heat up the barbie and slap that baby on.

Note that Paimon is best served at a medium-rare temperature of 130-135 °F – bloodiness is definitely preferred here! 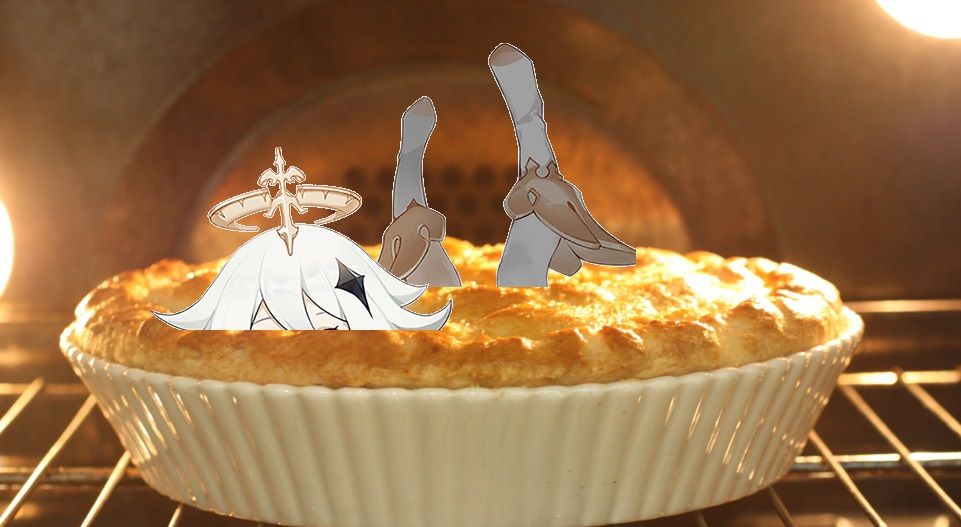 If you’re a fan of hearty pot pies, you’re in luck. Paimon is a fantastic filling for savory pies when complemented with carrots, celery, and peeled potatoes.

Paimon Pot Pie is easier to prepare than you might think, too – especially if you’re working with a store-bought crust. After removing and dicing your Paimon’s breast meat, toss it with your veggies, then combine it with one (1) can of Campbell’s Cream of Paimon Soup and two (2) cups of Paimon broth. Then, stuff this tasty filling into the pan, put on the top of your crust, and bake at a temperature of 425 °F for 30-35 minutes. You’ll want the crust to be a flaky golden brown.

Now? Just dig in! Paimon Pot Pie serves 4-5 people, so invite your friends to divide it up and share with the. After all, it’s what she would’ve wanted! 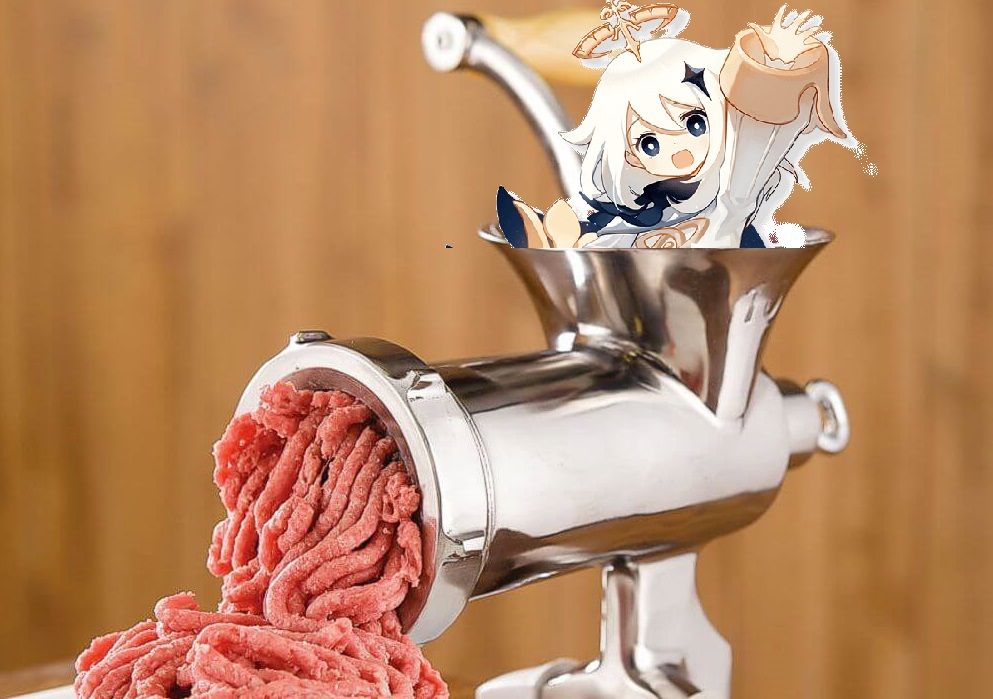 Finally, my personal favorite way to prepare Paimon requires a little more effort, but it’s well worth it. Please note that you’ll need a meat grinder, a meat slicer, a pair of kitchen shears, and a bone saw!

As ground Paimon is ideally made from strictly skeletal bones, you will first need to use your kitchen shears to remove and dispose of all internal organs – or save them for further cooking! Next, take your bonesaw to separate Paimon’s limbs (disposing of the head,) then use the meat slicer to cut off pieces of Paimon meat – medium thickness is preferred. From there, feed the meat into your grinder. Presto – you’re ready to cook!

Personally, I love making a zesty Ground Paimon Bowl. Simply take your ground Paimon and combine with soy sauce, brown sugar, ginger, garlic, sriracha, and red chili flakes. Then, cook in a pan until all ingredients are combined – make sure that the juices are all simmered into the Paimon! Serve over white rice, and top with chopped green onions and sesame seeds.

Ultimately, there’s no “right” way to prepare your emergency food. Paimon is a pliable little lass, and there are so, so many ways to enjoy her! What are some of your favorite ways to cook Paimon? We really want to hear from you, so sound off in the comments!

Next: Is Genshin Impact Coming To Xbox?

Up close with Nvidia's Dynamic Boost feature for gaming laptops

December 2020’s Games With Gold Lineup Features Saints Row: Gat Out Of Hell…And Not Much Else
We and our partners use cookies on this site to improve our service, perform analytics, personalize advertising, measure advertising performance, and remember website preferences.Ok